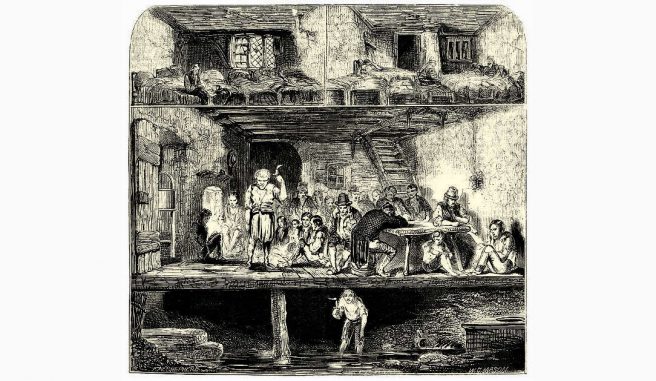 A poor dwelling in the Great Wild Street district of St Giles.  Image in The Builder 18 November 1854.

If you have been following the story of the mysterious death that came to light in late September 1872 at 24 Dudley Street, a slum dwelling in the Seven Dials district of St Giles, then you will remember that Ellen Hannen was a significant player in the drama.  Ellen was at one point thought to be the woman who was found dead in the basement kitchen.  She was a waistcoat maker who had last been seen in Seven Dials a week before the discovery of the body.  At the time she was drunk, and in the company of a man who was acting violently towards her.

One can easily see where this suggestion came from.  The condition of the body made it clear that the dead woman was utterly destitute.  The post mortem highlighted chronic damage to the liver.  A person in such reduced circumstances would readily look for shelter in the Stygian depths of poor lodging houses.  Such was 24 Dudley Street.

But the theory collapsed when Ellen Hannen, who was very much alive, walked into the premises of the Imperial French Photographic Company.  And so the question of identity continued to puzzle the Holborn police, who were investigating the incident.  In spite of the fact that many members of the public had gazed on the face of the mystery woman—the body had been taken to the mortuary of the St Giles workhouse, and photographs had been circulated—no definite information had yet been received.

STORIES OF THE STRAND
By a strange coincidence the Imperial French Photographic Company occupied premises in a part of London that has been visited more than once in articles on this website.  The address, which was shared with a tobacconist by the name of David Swaebe, was 352 Strand.  An immediate neighbour, at nos. 353 and 378, was the trunk making business of William Day, a name that has been linked to the escape of an urban wolf in 1820 and an attack by a pair of nocturnal garrotters in 1851.  A few doors further along stood Exeter Hall, which had been built on the site of Exeter Change.  At one time Exeter Change had housed a menagerie run by a Mr Edward Cross, who in 1826 had been obliged to join forces with a Mr William Herring in order to destroy his prize elephant in extraordinary circumstances. 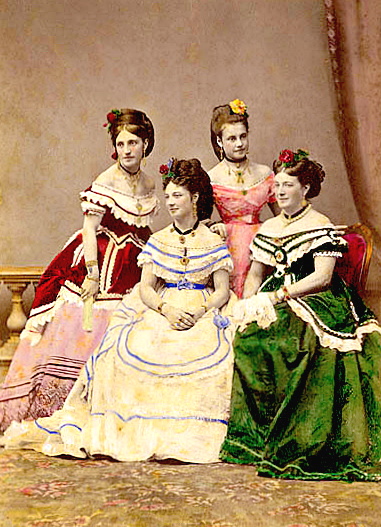 The Imperial is known to us through surviving examples of its cartes de visite.  In 1868, when its premises were not yet in the Strand, it ran the following advertisement:

SUPERIOR CARTES DE VISITE, 5s. PER DOZEN.  Taken in the Exquisite and Elegant French Style by the IMPERIAL FRENCH PHOTO COMPANY, 4, HAYMARKET (Pall-Mall End), The only House in London where Portraits are taken by PARISIAN ARTISTS etc.

Among other services they would provide free proofs and retakes and they would undertake to colour photographs by hand.  In a further bid for high-end customer satisfaction, which seems worlds away from the squalid episode in Dudley Street, they offered the use of private dressing rooms for ladies wishing to be photographed.

TRIALS AND TRIBULATIONS
When Ellen Hannen was asked by the staff of the Imperial how they might help her, she explained that she had come in connection with the Seven Dials mystery.  To anyone who caught a glimpse of her it would have been apparent that she bore a striking resemblance to the dead woman, whose photograph had become an object of endless speculation.  Perhaps it was no surprise that she had been falsely identified.

She had a sad story to tell.  She had been born into a respectable family, but her world fell apart when both her father and her mother died.  At the time she was still a child.  Confronted with the harsh realities of her orphaned condition, she took to needlework, scraping a living as a maker of gentlemen’s waistcoats.  Out of necessity she submitted to the long hours and wretchedly poor pay of one of the most oppressed of all occupational classes, whose trials and tribulations were often represented with enormous compassion in nineteenth-century literature and art. 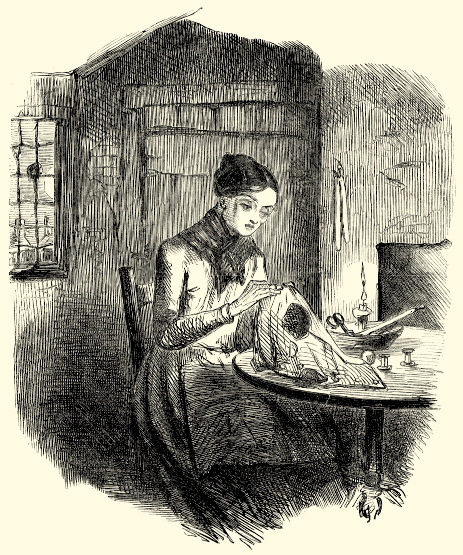 A young woman in straitened circumstances working with needle and thread.  Image by John Leech in Punch 1849.

When she was still only thirteen her life took a further turn for the worse.  A man began paying her more attention than she was comfortable with.  He was a tailor, which might explain how they became acquainted, and he took to following her to wherever she happened to be working.  He introduced her to drink—and to whatever else her use of the phrase “a dissipated life” implied—and slowly but surely dragged her down into her present mode of existence.  Probably he was the ruffian who had been seen assaulting her in the streets of Seven Dials.

Ellen must have had a sympathetic audience at the Imperial, for she went on to reveal more about her circumstances.  She had two brothers, both of whom were in what she described as “respectable” employment.  She was afraid that any suspicion that their sister was the degraded creature who had crawled into the basement in Dudley Street, and died without a shred of dignity, would inevitably tarnish their reputation.  And this, she insisted, was why she had come forward.  She ended by deploring her situation, which was “incompatible with her feelings”, and which she would do anything to escape.

STILL A MYSTERY
A week after the grim discovery in Dudley Street the identification of the victim with the Seven Dials woman known as Curly Polly had still not produced a result.  Curly Polly—“a woman”, as one newspaper put it, “of dissipated habits”—had not been found.  However, as a result of the questions that were being asked, unhappy rumours about her had been circulating.  There were those who thought that she had suffered a fate not unlike that of the poor women with whom she had been wrongly identified—that she had been assaulted, held against her will, even killed. 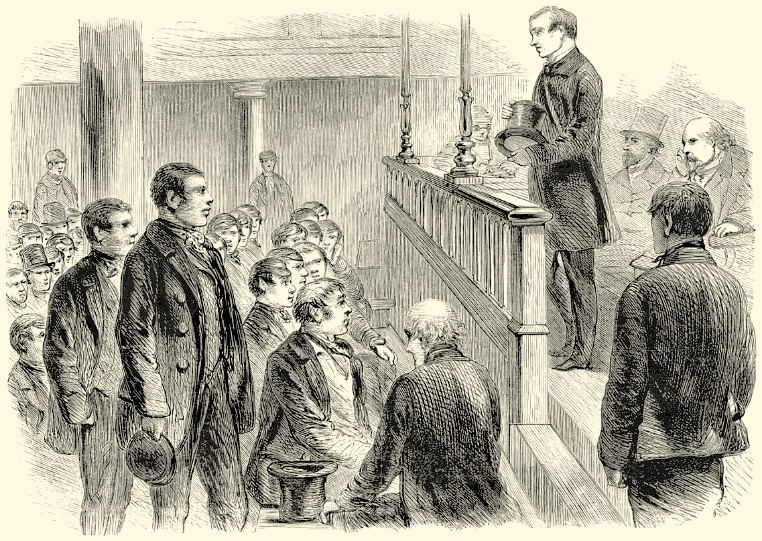 A meeting of ticket of leave men.  Image in Henry Mayhew London Labour and the London Poor volume 3 (1861) frontispiece.

Inspector Usher and Detective Sergeant Porter, in pursuit of their enquiries, went back to 24 Dudley Street.  In a back room on the second floor they encountered a man by the name of James Read, who struck them as suspicious.  He was a ticket of leave man—a convicted criminal released from prison on parole—and under seven years’ police surveillance.  He was known to be in some sort of relationship with a nineteen-year-old girl—possibly grooming her as a prostitute—which is no doubt why fingers were being pointed at him.  But the girl was alive.  Even so Read was up to no good, and the two policemen uncovered a large haul of articles—glasses and measures and the like—stolen from public houses.  These, like the photograph of the unidentified woman, were put on display at the Holborn police station in Bow Street, and publicans whose premises had been robbed were urged to see Usher.  As were all persons with missing female relatives.

Still, little in the way of a positive identification came to light.  Not surprisingly there was an active interest in cases of missing persons.  At one point it was thought that the dead woman was the wife of a solicitor, who had left her home and not been seen since.  Then again it was suggested that she might be the absent daughter of a wealthy family.  Such cases, though, albeit distressing, were unlikely to shed light on a death in the darkest depths of a London slum.  A third proposal, that she was a woman in her mid forties by the name of Elizabeth Peters, who worked as a boot-closer, was more plausible.  The similarity lay not in her features but in her clothing and—rather remarkably—her teeth.  But nothing came of it, possibly because the boot-closer was known to be a woman of good character.

SAD LONDON LIFE
The revelation of the lonely death in Dudley Street was greeted with pity and outrage.  “This is a sad picture of London life,” declared the coroner, Edwin Lankester, and in doing so he effectively set the tone for the writers of editorials.  The Morning Advertiser made the uncomfortable observation that the enquiry had brought to light a vast population of homeless Londoners unable to afford even the cheapest lodgings: 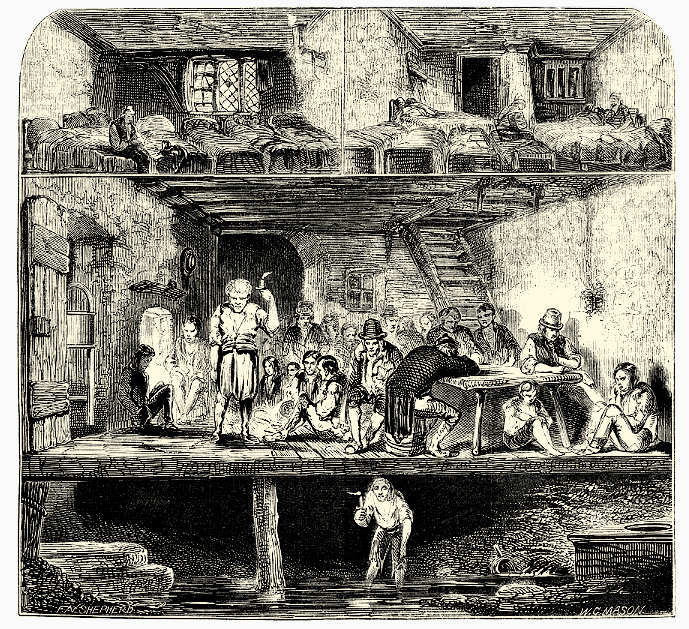 A view of the appalling conditions in a lodging house in Field Lane in Holborn.  Image in The Poor Man’s Guardian 20 November 1847.

to escape the vigilance of the police they resort to houses in poor neighbourhoods inhabited by numerous families, and hide themselves under staircases, on the landings, anywhere about the premises until daylight the following morning.

Meanwhile the Era, quoting Tennyson’s Maud, sought to convey the nightmarish image of a desolate metropolis that no doubt haunted many of its more thoughtful readers:

the neighbourhood is grim with horrors, and the courts about it very frequently echo to the “shrill-edged shriek of a mother”, which is said by the Laureate “to divide the shuddering night”.  One more dead body will not shock Seven Dials—one of the inevitable curses of a Great City.

Other newspapers took the opportunity to attack what they saw as a social evil.  The Pall Mall Gazette, for example, reflected that the woman’s death, which would “provoke a momentary shudder” but soon be forgotten, was not the only tragedy: the simple fact that such places as 24 Dudley Street existed at all gave the lie to the complacent belief that the capital had reached some sort of zenith in its development.  An even more abrasive editorial appeared in Reynolds’s Newspaper only days after news broke of the grim discovery in Seven Dials.  The idea of London as “the centre of civilisation” was scrutinised and ridiculed.  To the outsider the city offered a prospect of wealth on the one hand and religion and philanthropy on the other, opera and balls on the one hand and churches and hospitals and even workhouses on the other.  But these were only one side of the life of the city, and

in order to form a correct notion thereof, he needs to penetrate into the squalid lanes, filthy courts, and blind alleys that abound in the unfashionable districts of St Giles’s, Bethnal-green, and other overpopulated places.  In those miserable, murky dens, into which the light of heaven seldom shines, he might discover a state of things that would for once and for ever banish from his mind the delusive notion of England’s greatness, but more especially of London civilisation. 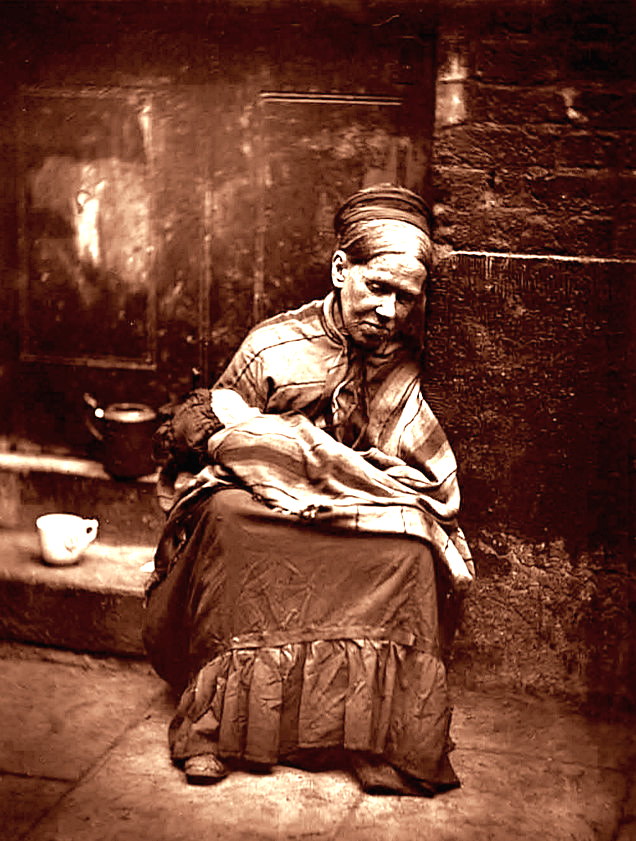 A destitute woman sitting on a doorstep in St Giles.  Image in John Thomson and Adolphe Smith Street Life in London (1877) between pages 80 and 81.

In order to underline its point Reynolds’s cited a further horrifying case, that of an old woman who had been driven by starvation and chronic ill-health to find shelter in a doorway in the vicinity of St Giles, and who later died in King’s College Hospital.

In reporting the latter the newspaper was unable to resist the ironic comment that “such a dreadful district” should be under the nominal protection of a saint.  But it also included the sobering statistic that “one in every twelve” of the population lived in poverty.  The unequal division of wealth was a national scandal, and forced people to take desperate measures, in some cases crime, in others suicide.  The workhouses were crowded, even more so the prisons, which offered a modicum of comfort.  So, could London truly claim to be the centre of civilisation?  Not until change—fundamental change—had been brought about.