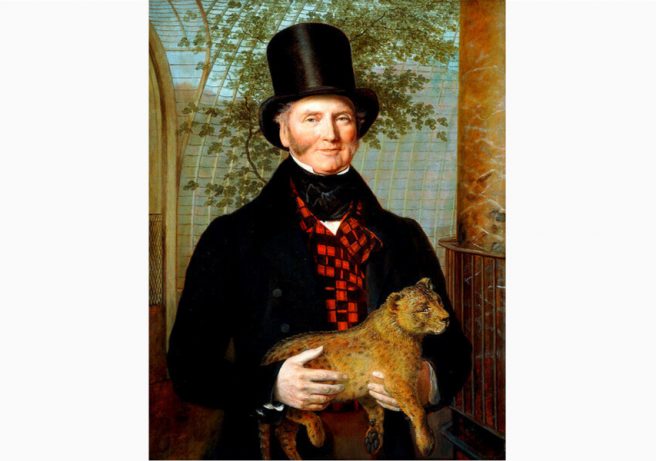 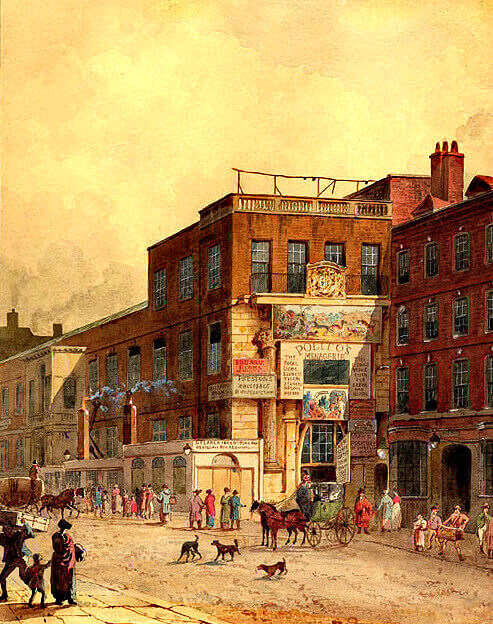 Exeter Change in the Strand in 1815.  The arched entrance to the arcade can be seen beneath the billboards advertising the menagerie.  Watercolour by George Shepherd.  © British Museum

How odd to think that a restaurant and a coffee shop in the Strand, almost opposite the Savoy Grill, were once the ramshackle building known in the early nineteenth century as Exeter Change.  The Change—short for “Exchange” in the sense of buying and selling—had been built out as well as up.  The pavement ran right through its ground floor, forming a long arcade of shops and stalls.  There one could buy walking sticks and umbrellas, suitcases and saddles, corkscrews and combs and any number of other useful items.  The entrance to the arcade was vast and arched, and the entire eastern end of the building was grand and ornate.

On the two upper floors was, of all things, a menagerie.  And forever associated with this bizarre ensemble of caged animals, which seemed to float above the crowded city, was a remarkable man by the name of Edward Cross.  In fact there was more to Cross than this: he was also a dealer in birds and beasts with outlets in Piccadilly and in the New (now Euston) Road.  But it is as proprietor of the Exeter Change collection that he particularly interests us, and his is certainly a strange story.

Born in 1774 in Gray’s Inn Passage, off the Strand, Cross had already been employed at the Tower Menagerie when he was taken on at Exeter Change.  Barely in his twenties he worked first for Gilbert Pidcock and then for the Polito family, until in due course, in about 1816, it fell to him to manage the menagerie himself.  He charged visitors a matter of shillings, and promised—and delivered—an experience fully in keeping with the tastes of Georgian Londoners.

CROSS AT EXETER CHANGE
The entertainment began at street level with a doorman dressed in the scarlet and gold livery of a Yeoman of the Guard and handing out information bills to passers-by.  At the top of the sawdust-covered stairs were “apartments” painted with lush trees and plants in imitation of nature.  The cages teemed with animals: they had only the smallest space in which to lie or crouch.  Some could be handled, but many were too dangerous.  There were unlikely partnerships, or “happy marriages”, of dissimilar creatures sharing dens—a cobra and a canary, a dog and a tiger, a lion and a tigress, and others. 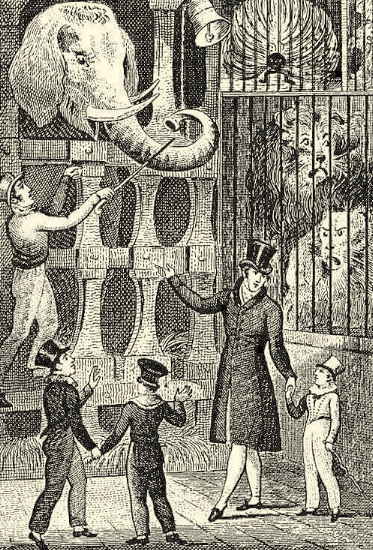 And yet entertaining the public had a dark side.  The animals were starved while the menagerie was shut on Sundays—or so it was rumoured—and were crazed with hunger by feeding-time at nine o’clock on Monday evenings.  The keepers put on a sort of sadistic circus, setting about the animals with sticks, and thrashing them to anger.  One particular keeper would taunt a lion by pretending to pull away its half-eaten dish of raw sheep’s head, or bullock’s shins, driving it to exhilarating extremes of rage.  Another, though, overstepped the mark, rousing a slumbering lion while inside its den.  He was dead in seconds.

Then there were the more subtle forms of cruelty.  When an ostrich died and was dissected, its stomach was found to contain buttons, nails, keys, a brass door-handle, a copper candle-snuffer, a sailor’s knife, a butcher’s hook, an iron comb, small stones and marbles, and coins of one denomination or another amounting to three shillings and four pence ha’penny.  These titbits had no doubt been lobbed by visitors into the ostrich’s cage.

However, interest in Cross’s animals was not always this crude.  The surgeon-scientist Edward Turner Bennett, the student of vertebrates Edward Griffith, the polymath Georges Cuvier and the printmaker Thomas Landseer all patronised the menagerie.  Cuvier, for example, acknowledged that there were few better places to study lions, and Landseer’s brother Edwin often sketched at Exeter Change, and drew on this experience when designing the four monumental bronzes that guard Nelson’s Column in Trafalgar Square.

Conditions in the menagerie would have been appalling by today’s standards, but the fact remains that Cross had a soft spot for animals.  He once saved the life of a hyena earmarked for a sort of laboratory experiment at the hands of the great Oxford geologist and palaeontologist William Buckland.  Then again he gave affectionate names to his “family”, calling full-grown lions Nero and Brutus, and younger ones Tom and Oliver, and lionesses Duchess and Charlotte.  Some females were given the sort of name that one might have bestowed on a cherished daughter: a Bengal tigress was called Polly, a panther Fanny, a leopardess Rose.

Easily the most remarkable story of Cross’s Exeter Change menagerie is the tragic life and horrible death of the elephant Chuny.  But this deserves such special treatment that it has been reserved for another day and another post.

CROSS GOES WEST AND SOUTH
But by 1829 the Strand had become unpleasantly congested.  The road had to be widened, and the jutting Exeter Change, which left only nine paces from footway to footway, was pulled down. 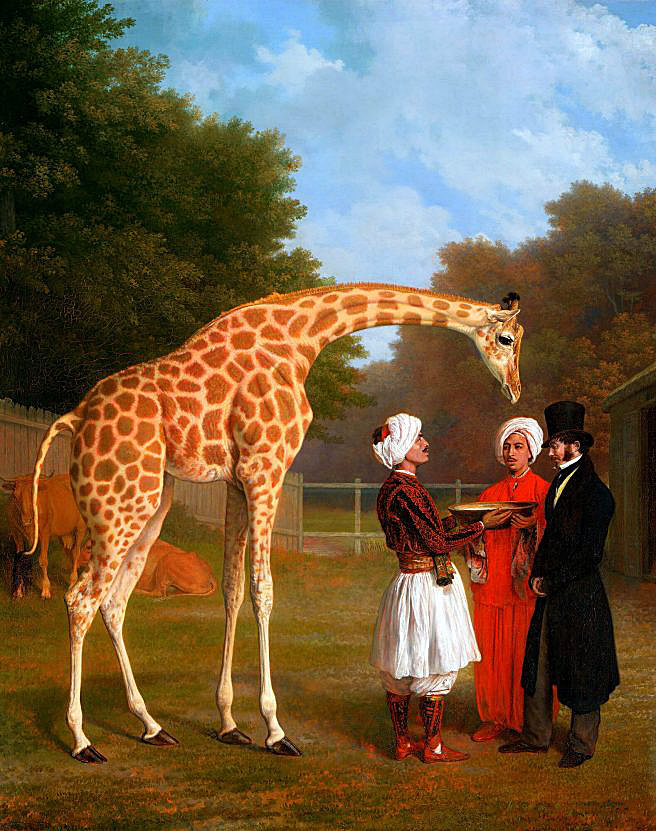 The Nubian giraffe in 1827.  The figure in the top hat is thought to be Edward Cross.  Painting by Jacques-Laurent Agasse.

Cross moved his animals a few hundred yards west to William Kent’s royal stables in the King’s Mews at Charing Cross.  There for a while they shared the same space as the National Repository—an exhibition of the latest innovations in the world of manufacturing—hunkering down among silk looms and model steam engines and mock-ups of suspension bridges.  But in 1831 Cross was on the move again.  This time he had his eye on an open site, and on land attached to a manor house sitting between Kennington Road and Walworth Road he co-founded the Surrey Zoological Gardens, which comprised about fifteen acres with a pleasure lake and picturesque wooded walks.  Little remains now.  There are pretty terraced houses in Braganza Street that may well have been built for the administrators and their staff.  The roads there are wider than is often the case in the more cramped parts of London, vestiges perhaps of what were once open spaces.  And there is a small park―Pasley Park―on what was once the pleasure lake.  The Society’s buildings eventually became the Surrey Music Hall, and later still the gardens were closed and the site given to St Thomas’s Hospital, before it moved to its current home in Lambeth.

Five different specimens of wild and domesticated pigs shown in a forest.  Coloured etching by J Miller after James Hope Stewart.  The second pig from the left is a collared peccary.  Credit: Wellcome Collection  CC BY

Cross sold his animals to the Society for £3500, and was appointed superintendent of the gardens, which was something of a personal triumph, as the Zoological Society of London had not long previously rejected his collection, as well as refusing to employ him as manager of the fledgling Regent’s Park enterprise.  He promptly applied for and was granted the patronage of William IV’s wife, Adelaide, and the list of subscribers had a fair sprinkling of nobility, and a number of men who became famous in their own right, among them the painter Samuel Palmer.  Cross also kept up a voluminous correspondence with a wide range of collectors and dealers, and there were some impressive commissions.  He had already delivered a giraffe sent by the Pasha of Egypt to George IV in 1827, and now he worked for Queen Victoria, collecting an ocelot from a ship docking in London, trying to treat a favourite monkey for consumption, and even having the monkey’s hide stuffed after its death and displayed at Windsor in a glass case.  His client list included some of the crowned heads of Europe, but for sheer eccentricity not one of these compared with the gentleman from Kent who hoped to interest him in a peccary from Valparaíso that was about the size of a pig and barked like a dog. 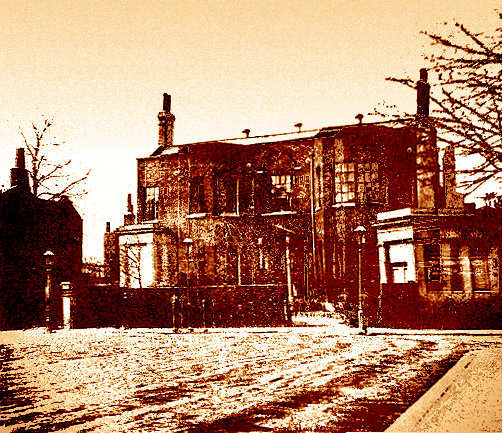 Photograph of Walworth Manor House in about 1862.  © Guildhall Library

AND LATER
Cross retired from the Surrey Zoological Gardens in 1844, selling the concern to William Tyler of Aldgate Street, who had been there at the very start in 1831, and had served many years as secretary.  (Under Tyler, sadly, the Gardens fell into disrepair, though their true death knell was the building of the second Crystal Palace not so very far away on Sydenham Hill.)  All the while he and his wife, Maria Ann, had lived in a sober family residence known as Walworth Manor House, which stood at the north edge of the Gardens with a coach house and stables, a forecourt, and a garden planted with fruit trees and shrubs. 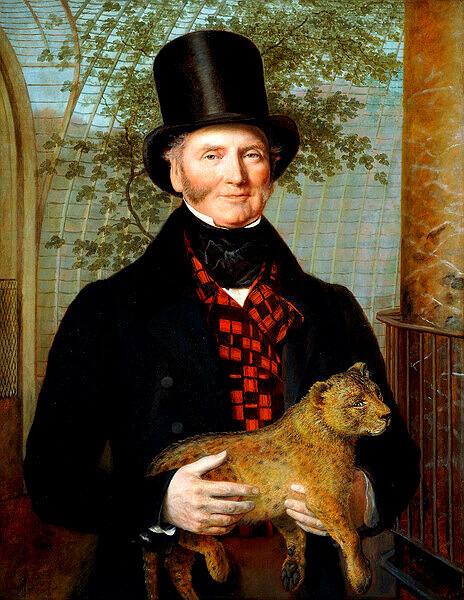 Portrait of Edward Cross in 1838 holding a lion cub.  Painting by Jacques-Laurent Agasse.

Later, some years after the departure of the Crosses, the house was sold at auction, being used as a meeting-place for a genteel society, then as a public house, and finally, and rather more grandly, as a tavern with tea gardens attached.  By the late nineteenth century it had been pulled down, the site having been bought by two builders in the New Kent Road for new dwellings.  All that is left is a blurrily indistinct photograph dating from the 1860s, its tones stark and gloomy.  When he wrote his will in February 1854 Cross was living in a large house at 48 Newington Place in Kennington, a stone’s throw from his beloved Surrey Zoological Gardens.  He employed a cook and a housemaid, both in their mid-twenties, and he was, in a specifically Victorian sense, quietly respectable.  At the very end he had moved from no. 48 to no. 45, perhaps needing less room now that Maria Ann was dead.

Cross himself died on the 2nd of October 1854 at the age of eighty, and it is recorded that an early autumn fog filled the Strand, where Exeter Change had once stood, long ago.  He was buried in Norwood Cemetery, in grave 3014 in square 92.  Nothing―not even a headstone―is there today.