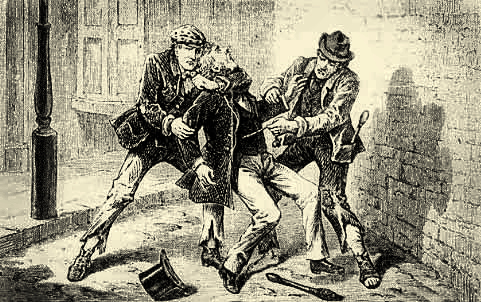 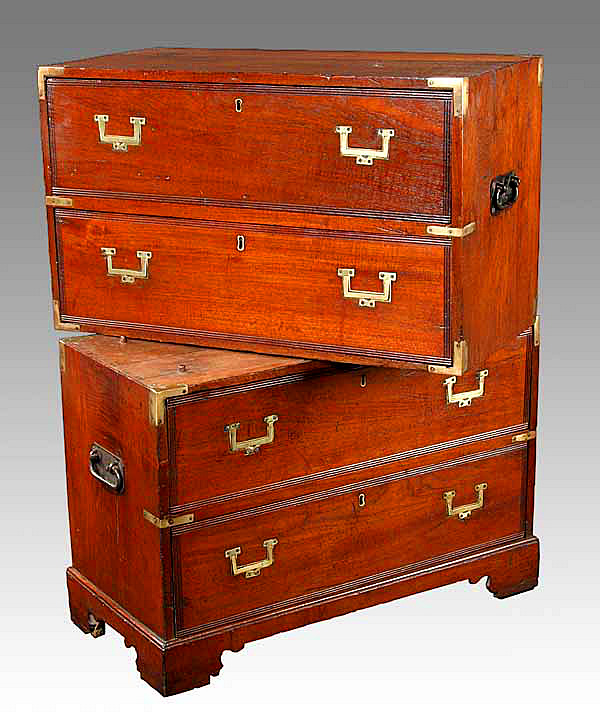 William Day was a maker of trunks and “campaign furniture” of the sort pictured here.  Early nineteenth century, designed by a Lieutenant Wilmot for his own use.

If you read our article on the wolf that escaped from the menagerie in the Strand—the menagerie on the upper floors of Exeter Change—then you will certainly have felt sorry for William Day.  He was the trunk-maker living next door to Exeter Change, and it was his premises the fugitive wolf entered through a skylight on a stormy morning in 1820.  We do not know exactly who was in the workshop at the time, and Day may or may not have found himself staring into the eyes of the wolf.  But he was the owner of the business, and the incident must have given him a nasty shock.

Sadly William Day’s troubles did not end there.  For more than thirty years later, in 1851, when he was already sixty years of age, he suffered a further unpleasant surprise.  This time, though, he was very much there in person, for he was the victim of a peculiarly vicious attack.  The attack took place on the night of the 27th of July not far from Seven Dials.  And the details are as follows.

IN MERCER STREET
At about half-past nine Day left 353 Strand, where he lived with his fifty-year-old wife Sophia, to have a drink with a friend.  The night was fine, but in a rather mysterious way violence was already in the air, for the public house where the two men passed an hour or so was run by a prize fighter called Byrne.  What is more, while out and about Day had stopped to watch an angry couple—a man and his wife—quarrelling in the street. 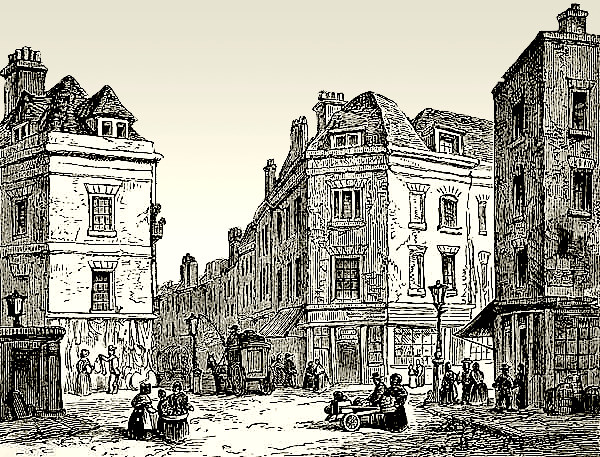 Day set off home a little after half-past eleven.  He walked down White Lion Street and over Seven Dials, and then crossed Castle Street to enter Mercer Street at its northern end.  Had he got to the bottom of Mercer Street, he would have found himself in Long Acre, and from there it would have been a short journey to the Strand.  But that did not happen.  What did happen was that Mr William Day, starting down Mercer Street along the left-hand pavement, saw two men standing in the road about fifteen or twenty yards ahead of him, watching.

Something was clearly brewing, and the suspicions of one George Appleton, a labourer, were well and truly aroused.  Appleton had formerly been a police constable—he had been dismissed four weeks previously for drinking—and as a resident of Seven Dials he knew who was who and what was what.  He certainly recognised the two men standing in the road—Charles Best, aged thirty-two, and John Kelly, aged twenty―and he had in fact been acquainted with them for a long time.  He had stopped at the corner of Long Acre and Mercer Street, and was smoking his pipe, when the two villains, both dressed in black, strolled right past him.  Appleton noticed that Best had his face wrapped in a black-and-white striped handkerchief—to cover a nasty abscess on his cheek—and that Kelly was both wearing a hat on his head and carrying a shiny cap in his hand.

Peering up Mercer Street Appleton saw Best and Kelly stop dead in their tracks, and then turn to follow an elderly gentleman―William Day―who had just passed them as he came down the street.  And then it happened.  As Best and Kelly moved in, Day whirled round to face them, and the three men, tangling with one another, fell to the pavement.  The next second the two assailants were back on their feet.  Scurrying up Mercer Street and along Castle Street they ran off towards St Martin’s Lane.  Poor William Day was still lying on his back on the pavement.

I HAVE LOST MY WATCH
Richard Long, a manufacturer of gold lace, lived in Mercer Street.  His house was at the top end—the first on the left-hand side—and from his bedroom on the second floor he was able to look down on the comings and goings below.  And that is exactly what he did at getting on for midnight on the 27th of July.  The street was well lit—there were gaslights on both sides and a public house with blazing burners—and a lone wayfarer could be clearly made out as he passed beneath Long’s window and spun round to confront two men, who had suddenly coming up behind him.  Long saw it all: the three men grappling, the oldest of them falling, the other two going down with him—or at least leaning closely over him—and then disappearing into the night.

But what he also saw, and what Appleton without the advantage of a high view point had not seen, was two other men.  Playing no part in the assault, they had been lurking on the right-hand pavement, and when the attack was over they started off up towards Castle Street.  Best and Kelly caught up with them, and then all four turned into Castle Street and ran away together.

Richard Long dashed down from his bedroom and out into the street.  The elderly trunk-maker was lying on the pavement, calling for the police.  His voice was faint, as if he were trying to speak with an injured throat.  Long helped him sit up, and asked him if he had lost anything in the attack.  With tears of pain and terror streaming down his face, and speaking only with great difficulty, he said that yes, he believed that he had.  He was feeling in his pockets.  “Yes,” he said to the solicitous Mr Long, “I have lost my watch.”

Meanwhile George Appleton had dashed up Mercer Street, pipe in mouth.  To his horror he noticed that Day’s face was heavily discoloured.  When a police sergeant on duty in Seven Dials, James Lewis Ashman of F division, answered his cries for help, he provided descriptions of the muggers.  Almost immediately Kelly was found by Ashman, but Best had made good his escape, and was only arrested days later when he was spotted in the Dials by another F division officer, George Dunham.  “I have not been out of prison half a minute,” Best said to Dunham, “and have not had time to breathe.”  And he meant it, for his latest spell in the House of Correction in Coldbath Fields had ended only the day before the incident in Mercer Street. 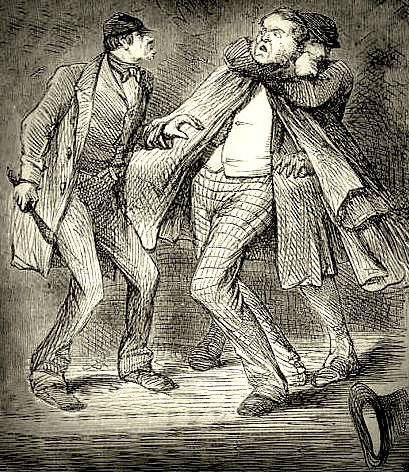 A gentleman is robbed by two garrotters.

SQUEEZE HIM TIGHT!
William Day had a vivid recollection of the assault.  One of the two men—he thought Best—had put his hands around his throat.  When the other did the same, Day found that he was unable to make a sound.  As he crumpled, Best leant right over him.  “Squeeze him tight!” Best said to Kelly.  Day understood what was happening, and even as he was losing consciousness he clamped his hand over the pocket where he kept his watch.  Then all went black.  When he came round he called “Police!”, but with his throat badly bruised his voice was faint and weak.  Several men were crowding round him, offering him assistance, asking if had been robbed.  He felt for his watch and chain, but they had gone.

Following his close brush with death Day was confined to his bed for four or five days.  His throat was so injured that he could not eat properly, and he had to be fed milk with a spoon, presumably by his wife Sophia, or by their young servant, whose name was Mary Parker.  Traumatised by the experience he stayed off work for a while, and went down to Ramsgate to heal. 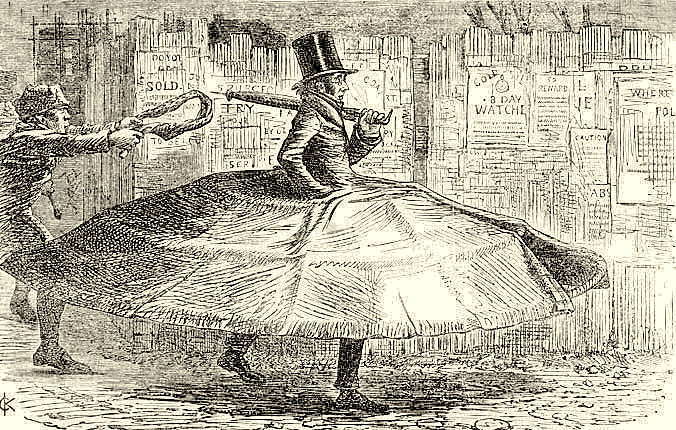 Mr Tremble borrows a hint from his wife’s crinoline.  A humorous comment on extravagant defences against garrotters.  Image in Punch 27 December 1856.

But in the great scheme of things, and in a way that is all too familiar to many victims of street crime, he was just a statistic.  For robbery by strangulation was the modus operandi of many nineteenth-century footpads, so much so that waves of “garrotting panic” swept the country, rising and subsiding and rising again in waves of collective hysteria.  Some of the results were peculiar—anti-garrotting spiked collars, cravats with concealed blades, a belt gun patented by Henry Ball that fired backwards—and Punch took great pleasure in mocking these eccentric designs.  Perhaps inevitably, it took an assault on a member of the establishment to effect real change.  In the summer of 1862 a Member of Parliament by the name of Hugh Pilkington was subjected to the same treatment as William Day—garrotted by two assailants and robbed of a watch and chain—but he was set upon in Pall Mall and not in a gloomy street off Seven Dials.  An outraged Parliament passed the 1863 Garrotters Act, which made assaults of this sort subject to corporal punishment. 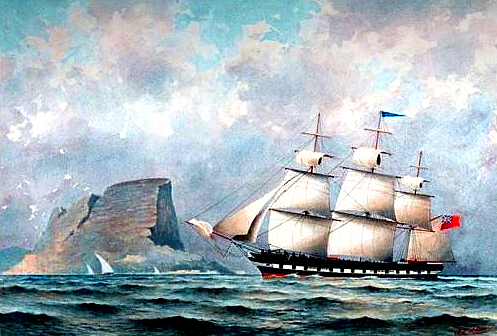 OFF TO FREMANTLE
Best and Kelly were tried at the Old Bailey on the 18th of August 1851.  They were accused of robbery with violence and with stealing property from the person of Mr William Day—the watch and chain—to the value of twenty pounds.  Both prisoners had extensive criminal records, and were accused of robbing another gentlemen on the same night as the Mercer Street incident, which, incidentally, may account for the cap Appleton saw in Kelly’s hand.  Found guilty for their many crimes, they were sentenced to transportation for life.

What happened to the younger of the garrotters is not known for certain.  Possibly he was the John Kelly who died in 1867 aged thirty-six.  But Charles Best, having languished in prison for six years, was sent off to Western Australia on the transport ship Norwood along with almost three hundred other convicts, arriving in Fremantle in the summer of 1862.  We catch a glimpse of him in the transportation registers—five feet six inches tall with grey hair and blue eyes—but we then lose sight of him forever.  It must be left to wiser heads to decide if Best’s sentence was disproportionate, but it is easy to imagine that he had time enough on board the Norwood to rue the day—the night—he set upon the elderly trunk-maker in Mercer Street.  How differently it might have turned out for him had Mr Day been walking home with his drinking companion!  Or, better still, with the pugilistic Mr Byrne.