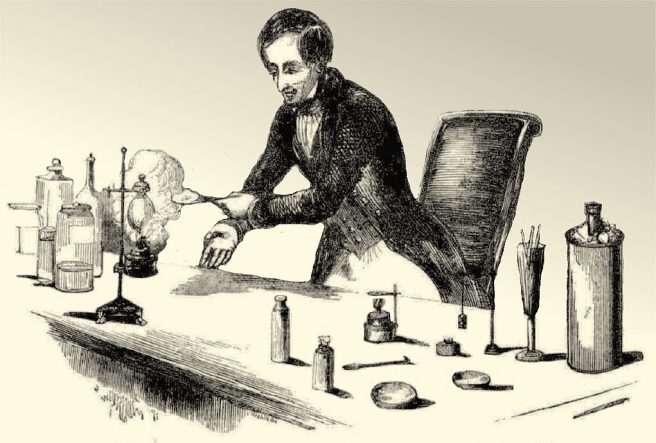 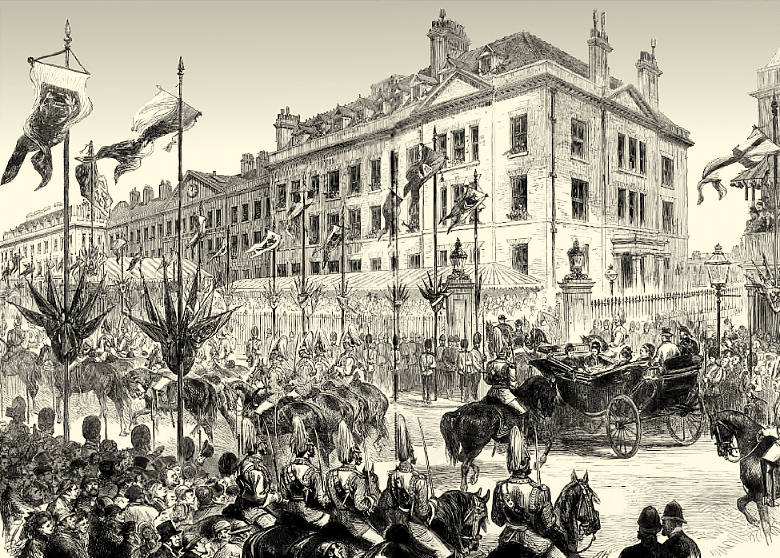 If you have been following the story of the attempted poisoning of the Reverend Chichester Reade by his servant, Walter Stephen Thompson, who was only fourteen years old, you will remember that suspicion fell on a bottle of tartarised antimony.  The boy, it was alleged, had mixed several ounces of the powerful emetic in a bottle of his master’s brandy.

However, nothing at this point had been proved.  The brandy had an alarming appearance, certainly, and the bottle of emetic had been tampered with, clearly.  But the evidence was circumstantial, and when an officer from the Islington constabulary arrived at the house in Tollington Park, in answer to Reade’s summons, he needed something concrete.  And so that same evening, which was the evening of Wednesday the 6th of March 1872, Detective Sergeant Newbold took the two bottles, namely the bottle of rather yellow and cloudy brandy and the bottle of tartarised antimony, and hurried with them to the home of Charles Meymott Tidy.

Tidy, in his late twenties, lived with his widowed mother and brother and sister at The Hollies in Mare Street in South Hackney.  He was a forensic scientist and a lecturer on chemistry and medical jurisprudence at the London Hospital, which is now the Royal London Hospital, in Whitechapel.  Given his expertise he was certainly the right person to go to, and he subjected the contents of the brandy bottle to chemical analysis.  We can hazard a guess at the procedure, for in A Handy-Book of Forensic Medicine and Toxicology, which Tidy co-wrote with a colleague at the London Hospital, and which appeared in 1877, a test for a solution of tartaric emetic is described.  First the suspect solution is mixed with dilute nitric acid.  If the emetic is present then a white precipitate forms.  This precipitate is further treated with ammonium suphide, and, if the precipitate turns from white to orange-red, the test has given a positive result.

A DISAPPEARING WITNESS
While the brandy was being subjected to this test—or to a test very like it—the wretched Thompson was brought back down to London from Norfolk.  On Tuesday the 12th of March, six days after the alleged attempted poisoning, the boy was charged at the Clerkenwell Police Court in King’s Cross Road.  Even though he was charged with the grave offence of attempting to murder Reverend Chichester Reade and his family, he treated the proceedings with an air of indifference.  The magistrate, William Major Cooke, asked him if he had any questions that he wished to put to Reade, the complainant, who was in the witness box.  “Did you see me take up the brandy,” young Thompson asked his master, “or touch it in any way?”  Then he added: “You know I am innocent of this charge, and that is made up against me.”  “I do not say that I ever saw you touch the brandy,” Reade replied, “for I did not see you do so.” 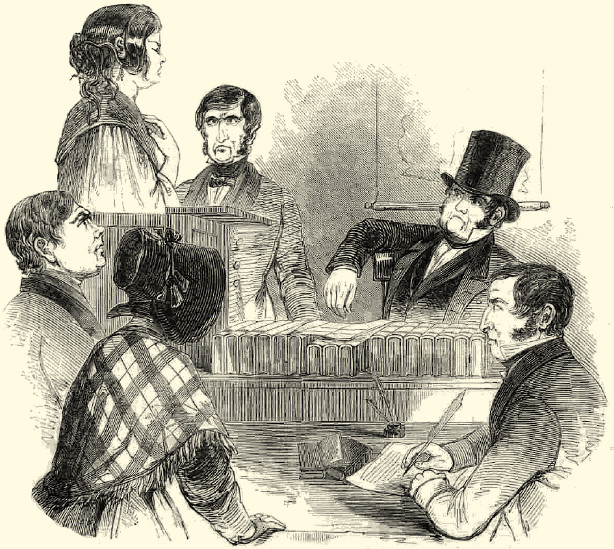 Inside the Clerkenwell Police Court.  Not the Walter Stephen Thompson case, though.  Image in The Illustrated London News 22 May 1847.

Thompson said that he had nothing further to ask or to say at this point.  Cooke remanded him in custody to appear again a week later, by which time Tidy would have finished his analysis of the brandy.  And so on Thursday the 21st of March the case returned to the Clerkenwell court, and the proceedings would have carried on from where they had left off, one presumes without a hitch, were it not for the strange matter of the disappearing witness.  The witness in question was Thompson’s fellow-servant, Elizabeth Roberts, and she had disappeared in the sense that, although she had been present in court on the Tuesday, nine days later on the Thursday she was not.  She had done a runner.

Reade announced that Roberts had handed him her notice.  She had left him her new address, which he gave to Detective Sergeant Newbold, and Newbold looked for her there but did not find her.  The address she had given was in Bethnal Green, and the landlady told Newbold that Roberts had left to take up a new situation.  Where that might be, though, she did not know.  Newbold made enquiries as to Roberts’s whereabouts, but nothing came to light.  However, he learnt that when Roberts had left her lodgings, two days after she had given evidence in court, she had done so rather hastily.

WHAT IF?
Meanwhile Charles Meymott Tidy had established that the liquid in the brandy bottle contained tartarised emetic, which, taken in sufficiently large quantities, would prove fatal.  He knew of cases where two grains per fluid ounce had proved fatal: Thompson’s brew was double the concentration.  In his Handy-Book he would describe the symptoms of antimonial poisoning as follows:

in the act of swallowing the poison, the patient complains of an intensely metallic taste.  In a short time pain, specially in the region of the stomach and, more or less, over the whole abdomen, comes on.  There is usually intense thirst, but drinking is an effort, owing to a feeling of constriction in the throat.  Incessant and violent vomiting, with continuous purging, are usually early and likewise hopeful symptoms.  If they are absent (as they sometimes are), the case is then more desperate.  Intense cardiac depression is a prominent symptom.  The pulse may be so feeble that it can scarcely be felt, the skin clammy and cold, the respiration laborious, and the urine, though increased in quantity, passed with pain.  Cramps in the extremities, convulsions and spasms of a tetanic nature, often precede death, which results generally from collapse by the depressing action of the poison on the heart. 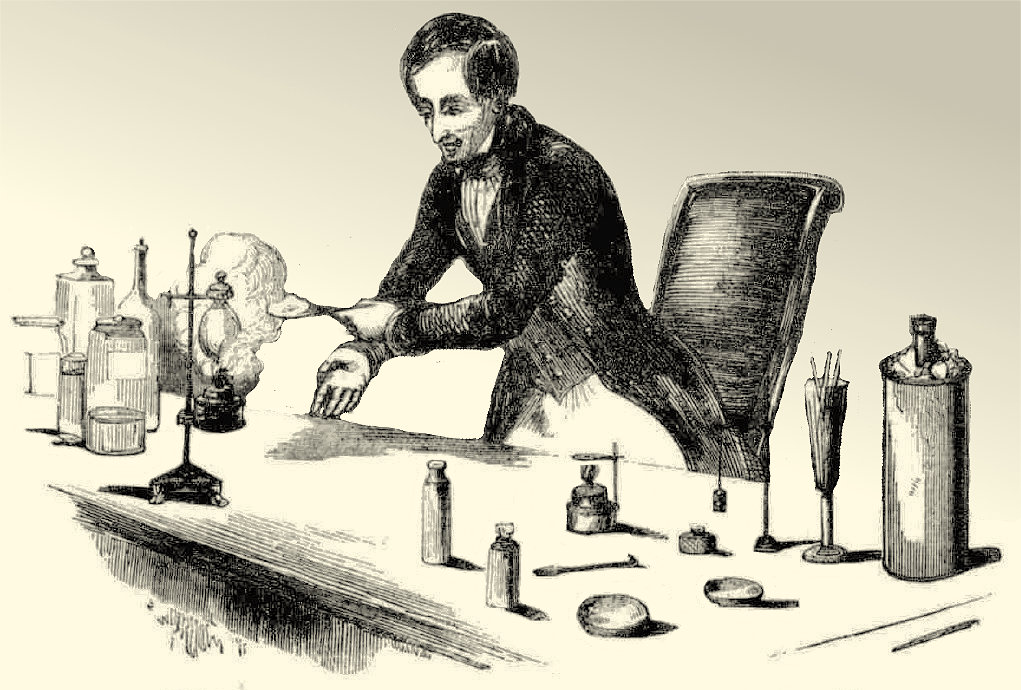 The toxicologist Alfred Swaine Taylor looking for evidence in the William Palmer poisoning case.  Image in The Illustrated Times 27 May 1856.

Clearly the curate would have had a most unpleasant time of it had he partaken of the doctored brandy, and one must hope that he was suitably grateful to the prudent Mrs Reade for warning him off.

AS TO HER CHARACTER
And this was the argument put forward by Mr Pain, defending Walter Stephen Thompson, in the Clerkenwell court on Thursday the 21st of March.  Pain suggested that the curious absence of Elizabeth Roberts had an easy explanation: she was unwilling to be cross-examined.  And she was unwilling to be cross-examined because she was afraid that her evidence would be shown to be a tissue of lies.  Pain made the further point that Roberts was in any case untrustworthy—and you will find this shocking—because she had been in the workhouse before entering the curate’s service.  She had left the workhouse without a reference as to her good character.

William Major Cooke, the magistrate, declared that the case could not proceed without Elizabeth Roberts.  At this point Detective Sergeant Newbold pointed out that the local woman who kept house for the Reades, Mary Davis, was in attendance.  Under cross-examination Davis alleged that Roberts nursed a grudge against young Thompson.  She had no idea what Thompson had done to deserve it, but she had heard a semi-intoxicated Roberts mouthing off about the boy.

Chichester Reade, as complainant, now returned to the attack by claiming that Mary Davis was lying about Elizabeth Roberts.  Elizabeth Roberts was not the person the defence presented her as being.  When he had taken her on, the workhouse had given her a reference, and it had been a good reference.  If she was not in court, it was not because she was afraid of being shown to have lied about Thompson.  She was not in court because she could not afford to be in court.  Either that or she was being kept away from court by someone acting on Thompson’s behalf. 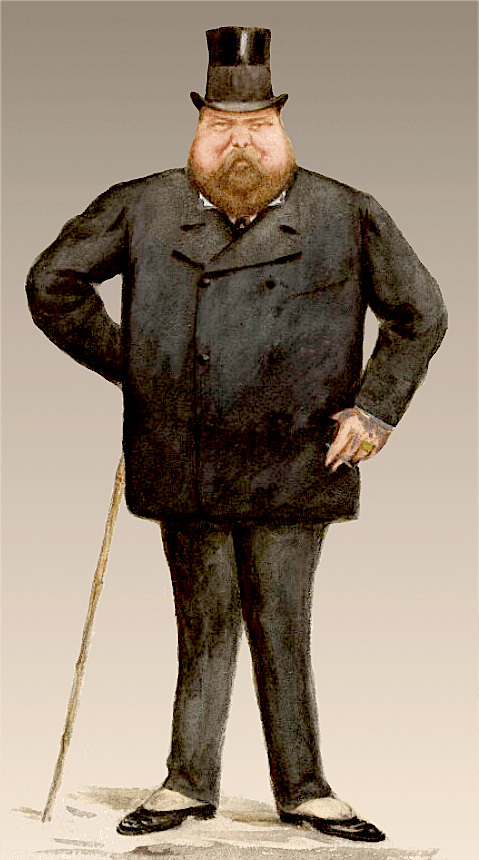 COMING HOME
There was no resolution.  Cooke had no choice but to dismiss the case, and to release Thompson, which he duly did, setting recognisances of twenty pounds and a surety of ten.  He also ordered the search for Elizabeth Roberts to continue, but there is nothing to suggest that she was ever found.

Walter Stephen Thompson marched out of the court in King’s Cross Road with his friends and supporters.  Whether he was innocent and relieved, or guilty and relieved, we simply do not know.  He appears to have lived the rest of his life in his native Norfolk, working as a labourer, and no doubt steering clear of men of the cloth.  I suppose it would be a neat twist if it turned out that he had followed a criminal career, but such is not the case!

As for Chichester Arthur Wellesley Reade, he went from one curacy to another, until in 1889 he was appointed domestic chaplain to the 3rd Duke of Wellington.  He had in a sense come home.  The 3rd Duke, incidentally, was Henry Wellesley, a man of vast proportions who at one point in his varied career chaired the Society for the Suppression of Mendicity.  Ten years later Reade was appointed rector of Wolverton in north Hampshire, and it was there that he died on New Year’s Day in 1904, succumbing neither to a bullet nor to a lethal dose of tartar emetic.  Alice, his widow, was left a little over a thousand pounds, and we are left wondering if she knew more about the events of March 1872 than ever came to light.

Honour Among Thieves, or, The Stanhope Street Affair

A Matter of Honour, Your Honour