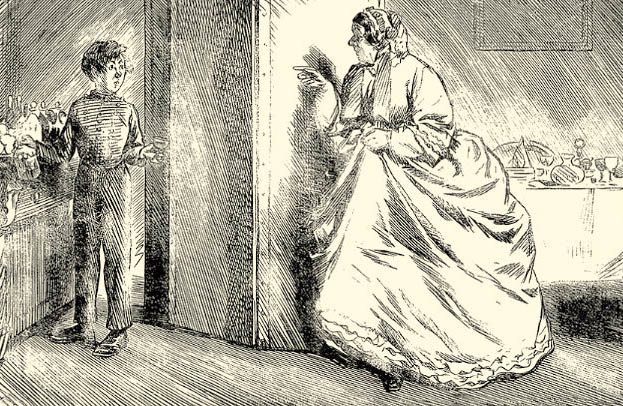 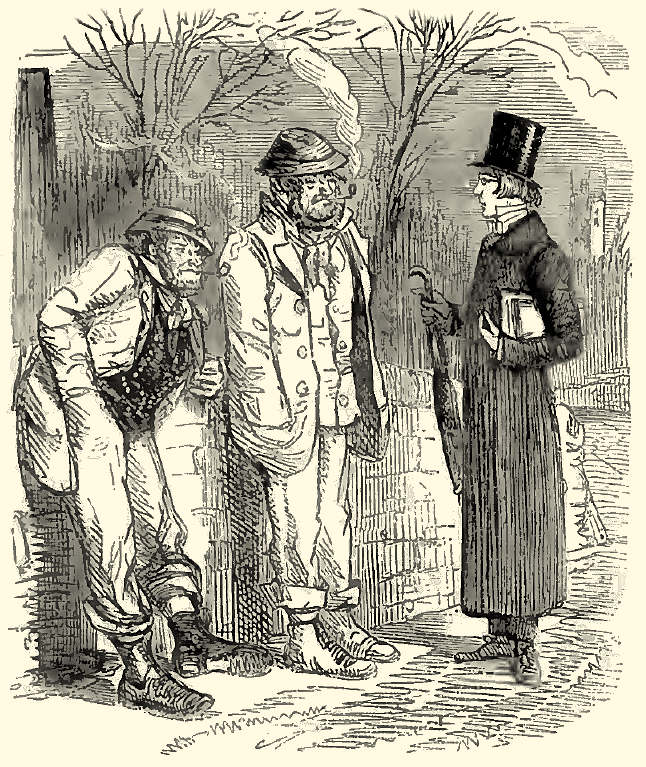 On Wednesday the 6th of March 1872, at an early hour, a man in his mid thirties, respectably dressed, walked into the railway station at Tottenham in north London with a young boy trailing behind him.  He bought a third-class ticket, which he handed to the boy.  He then waited with his companion for the train from Bishopsgate, the London terminus of the Great Eastern Railway.

When the train arrived, the brakes squealing against the wheels, the man opened the door of a third-class carriage, and signalled to the boy to get in.  Neither looked at the other.  Then, as the train pulled out of the station, spluttering and clanking, the man turned on his heels, and walked back down the platform and out of the station.  He did not look back at the train, which was already steaming off towards Cambridge and Norwich and beyond.

Later that day, at about two in the afternoon, the same man, whose name was Chichester Reade, arrived at his home in Tollington Park in Islington.  Here he was met by his wife.  She was called Alice—Alice Josephine Reade—and she was about ten years younger.  What followed was a brief but rather remarkable exchange on the subject of Walter Stephen Thompson, the boy Reade had put on the train to Norfolk at Tottenham.

The first to speak was Alice.  “Oh, I hope you have not taken any brandy,” she said.  “No, why?” her husband asked.  “Because Elizabeth,” Alice said, referring to servant of theirs, “has said it is poisoned by Walter.” 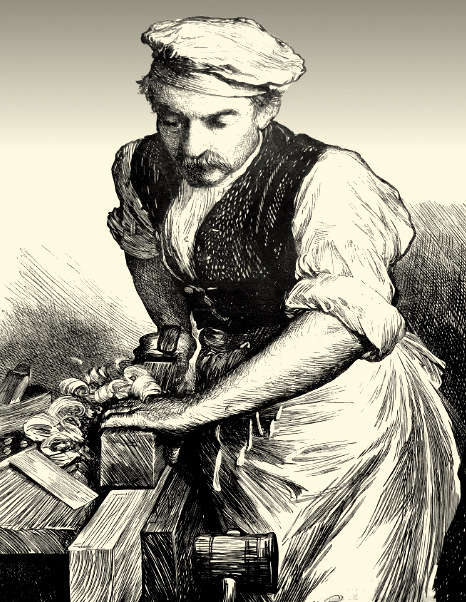 A carpenter at work at his bench.  Image in The Cottager and Artisan 1 June 1870 cover page.

UPPING STICKS
Our story properly begins in August 1870 when Chichester Reade, a Protestant clergyman, employed Walter Stephen Thompson, who was then aged thirteen, as an outdoor servant.  At the time Reade was the curate of Skeyton, a small village in Norfolk a few miles further on than Norwich.  He and his wife had a daughter, Sydney Alice, who was not yet one year old.  They were comfortably off, and were able to employ a nursemaid, Hannah Lark, as well as a young servant, Elizabeth Bailey.  They also had the services of a groom, John Moore, who lodged with their immediate neighbours.

As an “outdoor” servant young Walter Stephen Thompson worked for the Reades only during the day.  He lived not with the curate and his family but with his widowed father, who was a carpenter, and an older sister.  In all likelihood the curate’s residence, which was known as The Parsonage, boasted a garden and stables, and the boy would have been expected to help out in some useful way as well as learning the ropes.

In July 1871, almost a year after he entered Reverend Reade’s service, Thompson was elevated to the status of indoor servant.  Now he was a member of the residential staff, and, as such, he would have lived with the family in The Parsonage.  But before long, in September of the same year, Reade was given the curacy of St Columba in Kingsland Road in Haggerston, as a result of which he and his family, and Walter Stephen Thompson, upped sticks and moved from Norfolk down to East London. 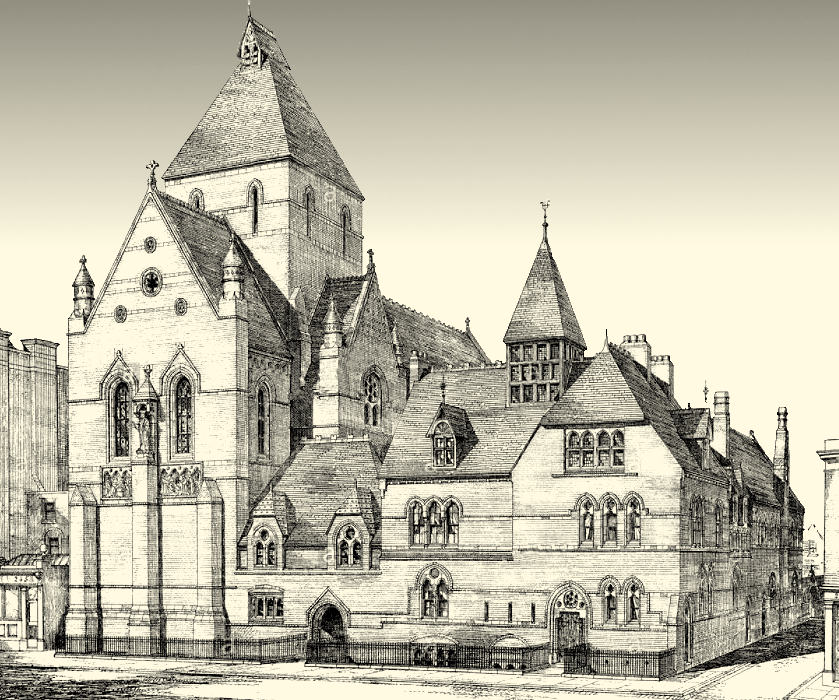 The church of St Columba in Kingsland Road in Haggerston.  Image in Building News 28 February 1873 between pages 258 and 259.

St Columba had been built in the late 1860s by James Brooks, an architect who won renown for his ecclesiastical designs in the Gothic Revival style.  The plain red-brick façade, relieved by bands of stonework in the walls, and by the delicate traceries in the windows, undeniably made a bold and uncompromising statement.  And fittingly so, as the church had been located in a poor and crowded district, where its disciples, much in the spirit of the eponymous Columba, might engage in important missionary work.

I KNOW ALL ABOUT HIM
The Reades lived some four miles from Haggerston in Tollington Park, which ran north and east from Hornsey Road in the direction of Finsbury Park.  The houses were substantial, with solid and dependable names along the lines of Albion Villas, and Clarement Villas, and Regina Villas.  The neighbours were equally solid and dependable, and the Reades were not alone in employing domestic servants to run their home. 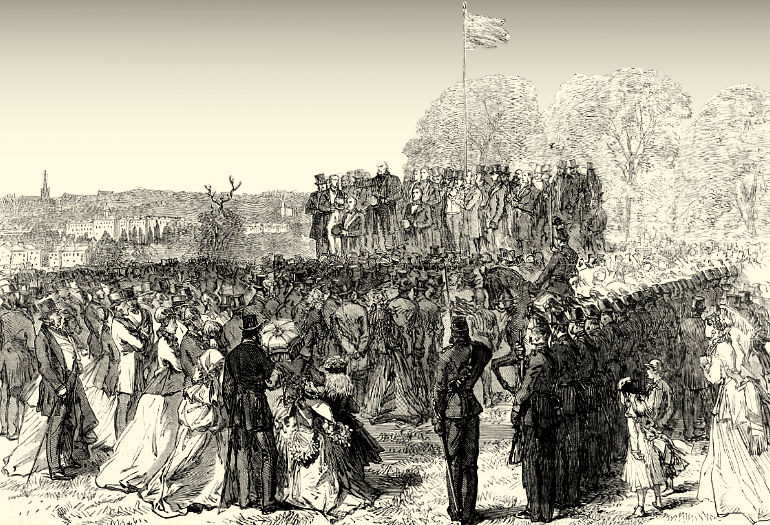 The opening of Finsbury Park by Sir John Thwaites, the Chairman of the Metropolitan Board of Works.  Image in The Illustrated London News 14 August 1869 page 165.

And here, in the house in Tollington Park, Walter Stephen Thompson, now aged fourteen, continued to serve Chichester and Alice Reade, and their daughter Sydney Alice.  What the family thought of their young servant, and he of them, is far from straightforward.  Reade saw two sides to Thompson.  “He was always steady to my face,” he claimed, “but exceedingly capricious and idle behind my back.”  As for Thompson, he appears to have offered different assessments of his master to different people.  Mary Davis, who lived in nearby Wellington Street, and who was “in charge” of the house, had only ever heard the boy describe the Reades in kind and even affectionate terms.  But Elizabeth Roberts, who was not only a servant but also the family cook, had built up a far less wholesome picture of Thompson’s relationship with Reverend Reade, and she went as far as to claim that he had made very worrying comments about what he would like to do to his master, and that he had often told her that he would murder him if he could. 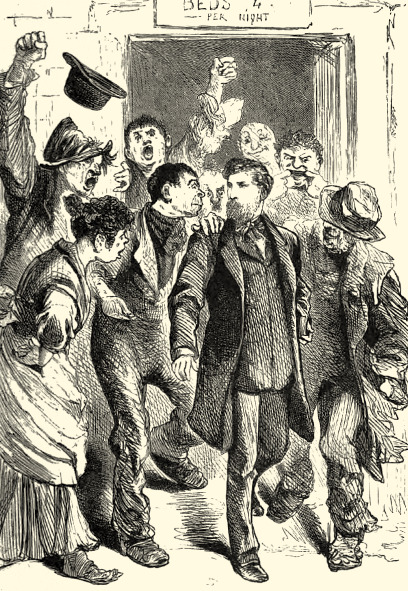 Rough treatment for a missionary in a London rookery.  Image in John Matthias Weylland These Fifty Years (1884) between pages 58 and 59.

Quite what Reade had done to earn Thompson’s dislike of him—if indeed he had done anything—we do not know.  But if second-hand and third-hand reports are at all reliable, then we might hazard a guess that he was an overbearing and unreasonable master.  Roberts remembered being told by Thompson that he had been treated unkindly.  She also remembered that the boy had unpleasant information—“he knew all about him”—that Reade would not want to be promulgated.  “He was not fit to be a minister of the Holy Gospel,” was his dark view of the curate, at least according to his fellow servant.  But an air of mystery hangs over these mutterings.  Possibly Reade was guilty of Thompson’s charges.  Equally possibly Thompson was a spiteful boy who was keen to lay false charges against his master.

SUCH A DEVIL
One way or the other, it is remarkable that the fourteen-year-old might have been contemplating violence.  But he was, and Elizabeth Roberts must have seen it coming.  For on the Monday, that is to say two days before the boy was sent packing by the curate, he started behaving in a very odd manner.

Roberts was busy working in the Reverend and Mrs Reade’s bedroom.  She was making the bed when Thompson came in, looked around, and then picked up what Roberts realised was one of Reade’s pistols.  Roberts was surprised, for the pistol was capped and cocked, which led her to suppose that it was loaded.  But it was what Thompson now said that filled her with alarm. 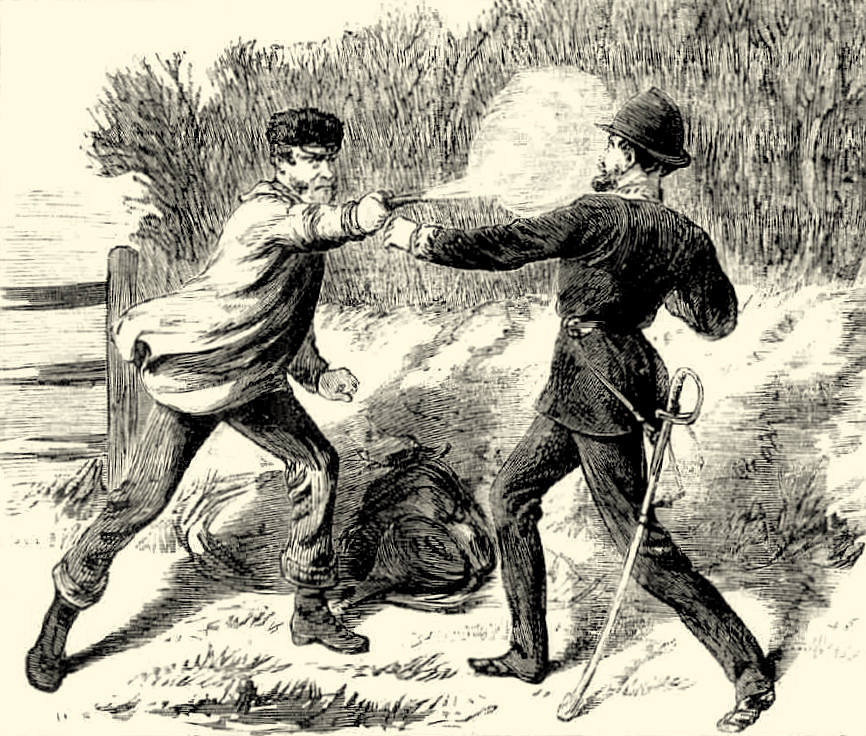 An armed man fires at a police superintendent.  Image in The Illustrated Police News 5 March 1870.

“I should like to try it,” he announced, “on the master.”  Roberts told Thompson to put the pistol down, warning him that if he did not do so she would report his behaviour to the household, and possibly to the police.  Thompson responded to the order with contempt.  “You are afraid,” he said.  “I am not afraid of you,” Roberts said.  “But if the police saw you, and heard what you said, you would be put in prison.”  “I would not mind if it was to put one into the master,” Thompson went on.  “For he would not know who did it.”  “What has he been doing?” Roberts asked  “He is such a devil,” Thompson said with vehemence.  “He is not fit to be a minister or to live, for it is me that knows his character and all his affairs.  If I could have got away long ago I would have cut it.”

Roberts made Thompson put the pistol down.  But one must assume that she told Reade what had happened, for the following day he dismissed the boy without any sort of hearing.  Mrs Reade broke the news to the wretched youngster, who, according to Roberts, was infuriated when he heard of his fate.  Later the Reades went out for several hours, and Thompson, having access to a sideboard where spirits were kept in a drawer, helped himself to some brandy.  Either he was unsteady on his feet as a result, or he reeked of alcohol, or both, as Reade guessed what he had done, and reported the misdemeanour to his wife. 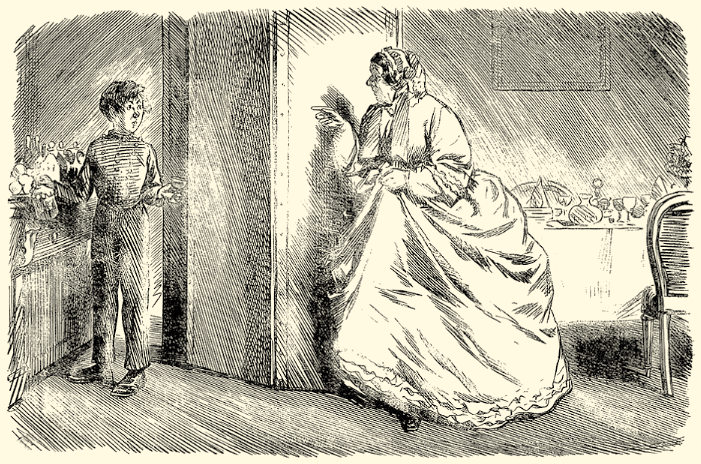 WISHING YOU GOODBYE
The next morning, before being taken to the station by the curate, Thompson unburdened himself to Elizabeth Roberts.  He bemoaned the treatment he had received, and assured his confidante that the master was going to be shot, if not by him then by one of the other people who he seemed to believe were looking for such an opportunity.  “The master has been very kind to me,” Roberts protested.  Thompson was unimpressed.  “I will wish you goodbye,” he said.

Reade, who was now ready to leave, rang for Thompson.  As a rule the sound of the bell was a signal for the boy to call his master any number of names, as long as he was not in earshot and Elizabeth Roberts was, and on this particular morning he was in fine form.  “I know what it is for,” he said.  “I shall have to wait in the passage for the old —.”  Saying this he went to meet the old  —, who hauled him out of the house.  Roberts then found Mrs Reade to tell her that she had seen the last of Walter Stephen Thompson, adding that he had not been sorry to go.

Later that morning Roberts was in the dressing room when a bottle of brandy on the mantelshelf caught her eye.  The brandy did not look quite right: the colour was dull and muddy.  Roberts knew that Thompson generally added water after pouring himself a drink, so the brandy should have been clear.  Remembering the boy’s death threats she hurried off to find her mistress.  And it was for this reason that Alice Reade said to her husband, on the afternoon of Wednesday the 6th of March 1872, that she hoped, oh, she hoped that he had not drunk the brandy, the brandy that had been poisoned by Walter … TO BE CONTINUED