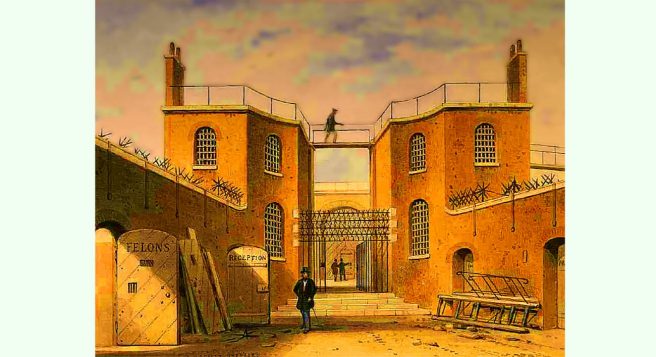 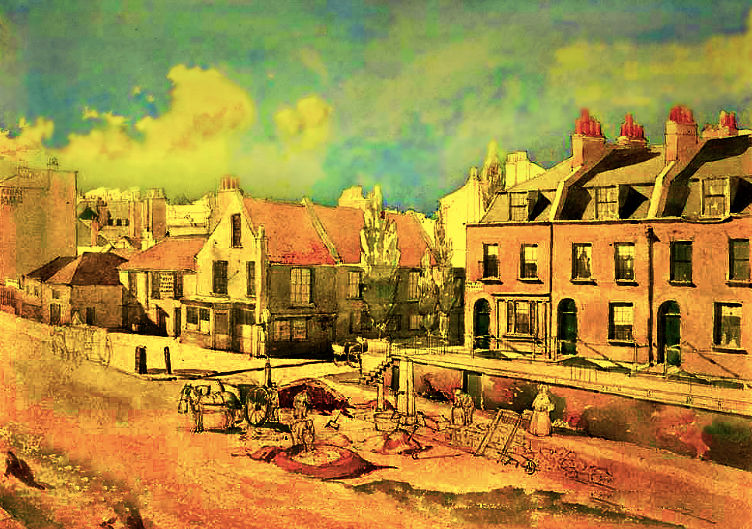 That night―the night of Tuesday the 1st of September―Henry Stanynought stayed in the same room as his son.  They were alone in the house.  For a time, as the light began to fail, and the shadows lengthened across the floor,  Stanynought sat deep in thought.  Then, when the little boy had finally fallen asleep, he closed the windows and the door.  There was a fireplace in the room, and stooping down he loaded it with charcoal, and lit a fire.  He lay down.  And, as the reek of the fumes began to fill the room, he told himself that he was doing the right thing.  Then he too fell asleep, reassured that if all went to plan neither he nor his son would wake up in the morning.

WHY OH WHY?
You will remember Henry Stanynought as the tragic character about whom I wrote in my previous post.  He was the subject of a flurry of newspaper reports in the closing months of 1835, and then, briefly, at the beginning of 1836.  He was in almost all ways completely unremarkable.  He was a bookseller with premises in Connaught Terrace off the Edgware Road.  He was a family man, and he and his wife Lucy had six children, and a seventh was about to be born.  Three of these children had already died at a very young age, but this personal tragedy would not in itself have brought down on Stanynought the intense public scrutiny he was subjected to.

You will also remember that Stanynought suffered from delusions and acute anxiety.  His condition, or so he believed, was inherited through the male line from his grandfather, who had died in an asylum.  He was tormented by the belief that he in his turn had passed on this mental fragility to his own son.  He judged his life not worth living.  And if his life was not worth living, nor was that of ten-year-old Henry.

Now he had the opportunity to put an end to all this suffering.  In doing so, he had convinced himself, he would be sparing his son the misery he had himself endured.  In one terrible but merciful act of destruction he would save two tormented souls.  Lucy and their other children were out of town.  Their servant and the shopman, William Jerams, were also absent.  The two Henrys had the house to themselves.  There was no-one to put a stop to the wretched father’s dire plan.

THE LONGEST NIGHT
On the morning of Wednesday the 2nd of September Stanynought woke up, and, as his rioting thoughts gradually fell into some sort of order, he realised that his plan of the night before had failed.  The little boy, whose death he had tried to bring about, was stirring as well.

Goodness only knows in what agonies of despair, and possibly of remorse, Stanynought passed the hours that followed.  But that night he tried again to kill himself and his son by burning a charcoal fire.  Once again he failed, and Thursday saw the start of another day of unimaginable anguish.

Remarkably, by the time night fell, Stanynought had been in contact with someone who might still have averted disaster.  His friend John Finch, the schoolmaster, had called in at the shop at about eight o’clock.  He and Stanynought talked.  Stanynought seemed to him a little dejected.  “Come home and sup with me,” Finch urged the bookseller in the hope of cheering him up.  Stanynought turned the offer down.  “I have been to Kilburn with a friend,” he said, “I have drunk gin and water, which has affected my head a little.”  Whether or not he had been to Kilburn, and whether or not he had been drinking with a friend, we simply cannot know.  But Finch took his leave.  He remembered the time of his departure—nine o’clock—and he remembered catching sight of little Henry in the shop.

That night the bookseller tried to do with laudanum what he had been unable to do with poison gas.  But the laudanum only made him sick, and realising in a moment of awful lucidity that he had failed again he picked up a large boot-jack, and struck little Henry on the forehead.  And then, as the boy fell back unconscious on the bed, his father placed a pillow over his face.  He pressed hard on the pillow, and kept pressing with his full weight, until no life was left in Henry’s body.

His dreadful act of mercy accomplished, Stanynought went down to the shop.  There, in a glass case, he found a clasp knife.  Having returned to his room he stabbed himself, aiming the blow at his heart, fully intending to bring down on himself the long night of death, and with it release from his unendurable torment. 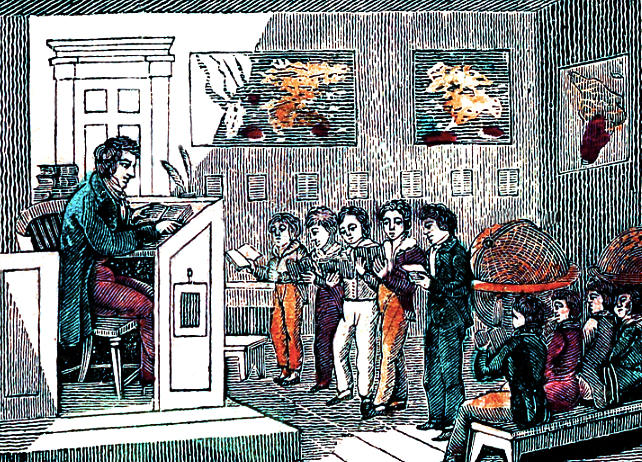 PRAY DON’T!
Early on Friday morning William Jerams arrived at 84 Connaught Terrace.  At eight o’clock, the time when Stanynought would ordinarily have come downstairs, Jerams was on his own in the shop.  He was mildly surprised.  When ten o’clock came, and there was still no sign of Stanynought, Jerams went up to call him.

He found the door locked, and again he was surprised at what seemed to him to be a departure from Stanynought’s usual practice.  Standing outside the door he called to his employer.  “Do you know it is ten o’clock?”  “Yes,” Stanynought replied—he had only wounded himself with the knife—at which Jerams went back down.  Another hour passed, and Jerams, still in sole charge of the shop, once more climbed the stairs.  Stanynought answered him weakly through the closed door.  “Send for Mr Finch,” he said, “for I wish to speak to him particularly.”

John Finch was with his pupils when at about half-past eleven the bookseller’s assistant, young James Stacey, came running into the schoolroom.  “Mr Stanynought wishes to see you immediately!” he said, and without stopping to catch his breath he raced back to Connaught Terrace with the schoolmaster close behind.  When they entered the shop, an anxious Jerams explained that something was wrong in the room upstairs.  Dashing up to the second floor Finch approached the room.  The door, which Stanynought had by now unlocked, stood slightly ajar.  “Don’t come in,” Stanynought called out when Finch knocked, “I shall shock you!  Pray don’t!”  “Pray let me come in,” Finch said.  “Are you ill?”  Pushing the door open, and entering the room, he found Stanynought in bed, and beside him his son, who for all the world appeared to be asleep.  “Tell me, what is the matter?” Finch said, taking Stanynought’s hand.  “Oh, I dare not,” Stanynought replied, “it will shock you so.”  Eventually he confessed that he had killed his own son, and that he was himself dying.  Finch asked what help he wanted.  Stanynought pointed to the knife—“that was the knife I did the deed with”—and three letters on a chair by the bed.  Two were addressed to Lucy, in Gravesend, and the third to a local doctor by the name of Edgar Barker, who lived at 40 Edgware Road.

Finch hurried off, but not before pocketing the knife as a precaution, along with a razor he had caught sight of.  While Jerams went off to find Lucy’s family in Richmond, and Stacey took a message to Stanynought’s brother in Dorking, the schoolmaster walked quickly round the corner to fetch the doctor.  On seeing the body, which was lying prone on the bed, the doctor immediately pronounced the little boy dead.  Then, having ascertained that Stanynought was not in danger, in spite of the copious loss of blood, he dressed the wound in his left side, and with Finch’s help carried the body of the boy into an adjoining room.

Then John Finch and Edgar Barker spoke to the unhappy man, who acknowledged the terrible deed.  “Oh my poor boy!  It would be a great mercy for anyone to kill me.”  “It is a great crime,” Finch said.  “Think of your soul, and pray to God.”  “I have done so.  I know that God is not angry with me.”  A moment later he cried out against his affliction, declaring that he had saved his son from ruin.

A SECRET NO MORE
When Stanynought’s friends reported that night’s grim events to the Marylebone Police Court, an officer by the name of William Henry Morrison was dispatched to Connaught Terrace.  “How do you do?” Morrison asked.  “Pretty well,” Stanynought replied from his bed.  “Are you conscious of what you have done?”  “Perfectly so—it’s no secret—I’ve killed my poor boy.”  That night, while watching over the prisoner, Morrison picked up a book.  “I read that volume last night,” Stanynought said, fixing Morrison with a steadfast gaze.  “It will not suit you,” he added, suggesting that the policeman find another down in the shop.  Then another wave of anguish seemed to engulf him.  “My poor dear boy!” he cried.

The next morning—the morning of Saturday the 5th of September—Stanynought was summoned before the magistrates.  Morrison and a second officer, whose name was Franklin, were instructed to escort the prisoner.  “I have no fear in meeting the magistrates,” Stanynought assured them, in spite of which it took him the best part of two hours to dress himself.  From time to time he would slump back down on the bed, only with difficulty being persuaded by Morrison and Franklin to stand up again.  In due course he was put in a coach by the two officers.  He was joined by his brother, Thomas Stanynought, who had arrived from Dorking, whereupon the sombre party travelled through the streets of Marylebone to the police court in the High Street.  They arrived a little after three o’clock in the afternoon.  But only at seven in the evening did the examination of the prisoner begin. 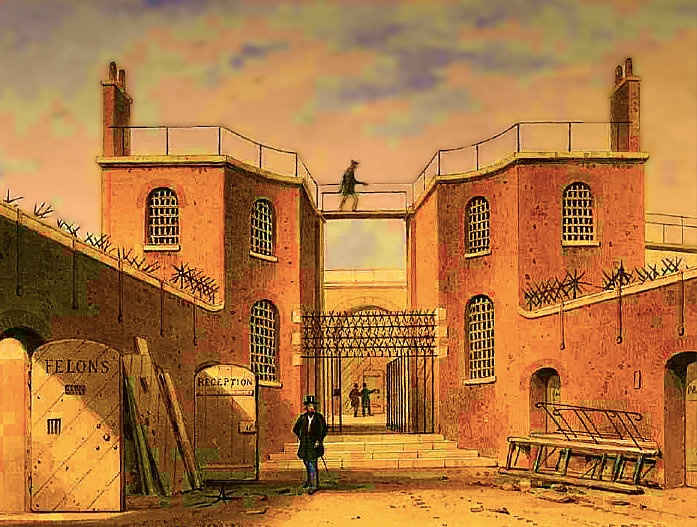 SO VERY LOW
By then news of the tragedy had got out, and the court was crowded with curious onlookers.  When the presiding magistrate, David William Gregorie, had taken his seat, Stanynought was brought in, leaning on the arms of Constable Morrison and his brother Thomas.  He was guided to a chair in front of the bench, while his friends stood nearby.  Clearly very low he stared at the floor.  He looked faint and weak, and gave no impression of understanding what was going on around him.

Following a brief examination Henry Stanynought was remanded in custody in the New Prison in Clerkenwell. An inquest on the body would be conducted, and the case sent to trial.  Thomas Stanynought was given permission by Gregorie to go with his brother to Clerkenwell, to be by his side, to bring him a little comfort even as he plunged into the abyss of loneliness and remorse.

And Lucy, his poor wife?  She had arrived back from Gravesend on the Friday night, summoned by Edgar Barker.  In his letter, written in anticipation of his death, Stanynought had asked Barker to explain to Lucy with “caution and prudence” the fate that had befallen him.  She was not told all the details.  She knew only that tragedy had struck her family down yet again.  And so she went to stay with a neighbourhood friend, unaware that her husband had been the agent of their dear son’s untimely death …  TO BE CONCLUDED