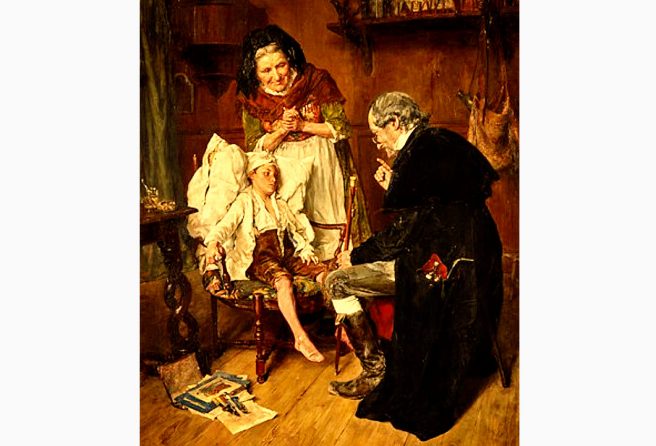 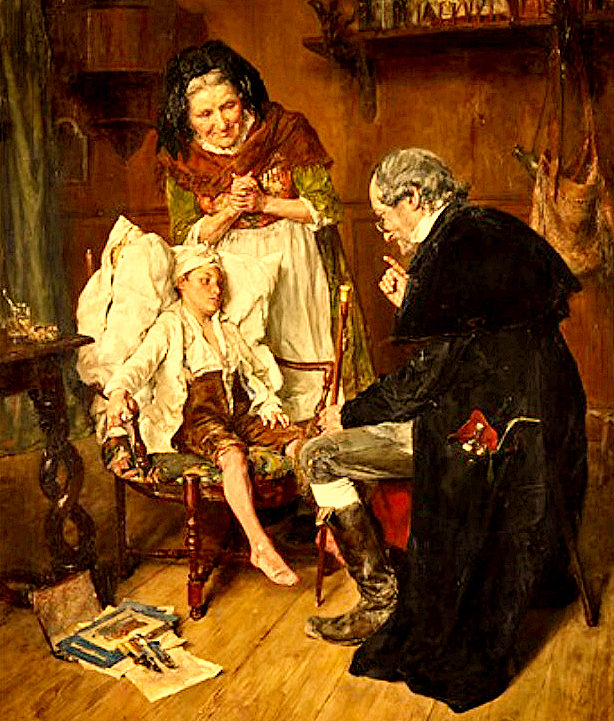 A touching portrait of a doctor caring for a young patient.  Oil painting by François Adolphe Grison.

If you have been following the story of Louisa Nathalie, which can be accessed on the London Overlooked website by following links to Part One and Part Two, you will remember that she was the victim of a callous ex-army officer by the name of Arthur Robert Willoughby Wade.  She was a young German woman residing in the Strand Union workhouse in Cleveland Strand, and in 1863 Wade sexually assaulted her, having gained her trust with a false promise of employment as a wet nurse.  As she recovered from her ordeal she was tended by the workhouse medical officer, Dr Joseph Rogers, who, as we shall see, fought her corner as well as caring for her as a patient.

In the weeks that followed her ordeal Louisa’s condition caused Rogers considerable concern.  She had returned to the workhouse in what he described in a letter to the Times as “a fearful state of alarm and trepidation”, which was fully accounted for by the cynical deception and physical abuse Wade had inflicted on her.  And, of course, she was pregnant, her pregnancy being the very reason why Wade was able to lure her to a disreputable location off the Strand with the entirely bogus promise of meeting the non-existent “lady of title” whose non-existent child she was expecting to nurse.

The story of Louisa’s pregnancy was told in Part One, but the most important details are as follows.  She had been ensnared by a young Frenchman, who lived off her for a while before abandoning her in London.  When she realised that she was carrying his child, Louisa took herself to the Cleveland Street workhouse.  At this point she was to all intents and purposes alone in the world, as her mother in Germany had recently died, and her brother and sister, who were all that remained of her immediate family, lived in America.

A case being tried in the Central Criminal Court at the Old Bailey.  Image in The Graphic 17 November 1877.

CAREFULLY WATCHING
Louisa went into labour on the 22nd of February.  She suffered considerably, and not only from the pain of giving birth.  Even before the contractions began, Rogers was worried about her state of mind, noting that she was “much depressed in spirits”, no doubt in consequence of the trauma she had experienced at the hands of Wade.  In his opinion her condition, both mental and physical, was frail enough to warrant precautions, and he had her watched carefully at all times.  When Louisa was suddenly seized with convulsions, Rogers feared the worst, and for several days he watched her as her life hung in the balance.  She recovered, but she was not fully fit for a number of weeks.

In July of the same year Wade was tried at the Old Bailey.  There were five indictments, one for each of the assaults he had committed between April 1862 and May 1863, and to all of the charges he pleaded guilty.  He pleaded not guilty only in response to a sixth indictment, which charged him, in the archaic but precise language of the law court, with having

unlawfully, and by means of certain false representations, detained the aforesaid Bridget Corrigan, with intent carnally to know her.

The sixth charge was dropped for want of evidence, and it was left only to pass sentence on the guilty man.  He was sentenced to eighteen months imprisonment with hard labour.

Convicts on the tread-wheel in the Middlesex House of Correction at Coldfield Baths.  Image in Henry Mayhew and John Binny The Criminal Prisons of London (1862) between pages 306 and 307.

GONE FOR GOOD
Wade was bundled off to the Middlesex House of Correction at Coldbath Fields in Clerkenwell, and one would hope that he would never have been heard of again.  But he was—twice.  For not long after the completion of his eighteen months in prison, in May 1865, he married the woman who had already given birth to two illegitimate daughters, one of whom, Ida Arabella Antoinette Rice Wade, had died at the tragically young age of three in 1863 at about the time of the assault on Bridget Corrigan.  His wife was Lucy Maria Rice Harley, about whom nothing certain is known other than that her father was a “gentleman” for the purposes of the marriage certificate.  Wade also described himself as a gentleman, which serves as a reminder that he was no longer an army man, having sold his commission in the Seaforth Highlanders about ten years previously.  Clearly, though, his shaming in the Central Criminal Court had left undiminished his sense of his own significance.

The other mention of Wade surfaced in the same year—1865—when he was declared bankrupt.  He had run up debts of about fifteen hundred pounds, and as he had no assets he was unable to pay his creditors.  At that point he went to ground, in the sense that his name no longer appeared in newspapers or documents of any description.  Given that his other daughter, Jessie Victoria Rice Wade, died in 1875 in Brittany—at her mother’s residence, according to The Hour—it is possible that he had left the country, and was lying low.  Poor Jessie, by the way, was only sixteen. 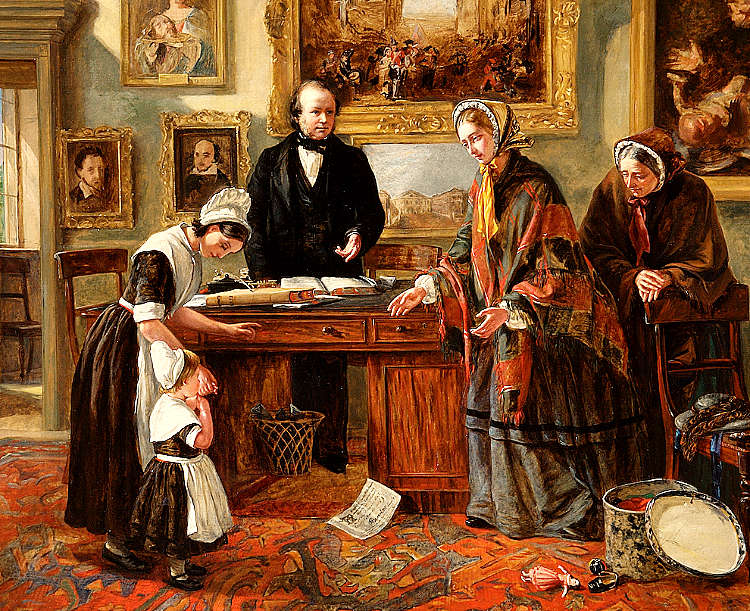 A little girl being reunited with her mother at the Foundling Hospital in Bloomsbury.  Oil painting by Emma Brownlow dated 1858.

I CANNOT DO IT
But the story of Louisa Nathalie and Dr Joseph Rogers was far from over.  For with a newborn child, and with not a soul to support her, Louisa was facing a bleak future.  Her plight deeply affected the officers of the workhouse, and serious consideration was given to finding a way to give her the help she so desperately needed.  The first proposal was to arrange for Louisa’s child to be accepted into the Foundling Hospital in Bloomsbury.

The Foundling Hospital had been established in 1739 by Thomas Coram, a sea captain, to care for children who had been or were in danger of being abandoned.  The conditions of acceptance were unambiguous, and it was a requirement that the father had deserted both the child and its mother, and that the mother was unable to manage on her own.  On both these counts Louisa’s child certainly would have qualified.  However, it was a further condition that a mother was not allowed any involvement in the care of her child, and when Louisa realised what this meant she refused to go along with the proposal.  She simply would not agree to give up her child in this way.

The workhouse abandoned the plan.  In the meantime, though, news of Louisa’s predicament had been sent to her siblings in America, who made it quite clear that they were as happy to give her and her child a home as she was anxious to put the recent past behind her and make a new start.  However, they were poor, and were not in a position to cover the cost of the passage, which entailed not only a voyage to New York but also railway journeys on both sides of the Atlantic.  And so it was decided to raise the money by subscription, and to this end Rogers submitted a letter to the editor of the Times in which he gave a brief but moving account of how Louisa had been assaulted by Wade, followed by a straightforward appeal for help.  “A few pounds would suffice,” he wrote in reference to raising the necessary funds, “should a generous public only respond to my appeal on her behalf.”

AND MAYBE HER MAJESTY
The letter, which was printed only two days after the sentencing of Wade at the Old Bailey, must have touched many hearts, for more than enough for the passage was raised.  Rogers arranged for subscriptions to be sent to the London and Middlesex Bank in Upper St Martin’s Lane, and the final sum was forty-five pounds, of which only about twenty was needed for railway and steamer tickets.  The good doctor made sure that Louisa was properly supplied with clothes, and that the captain of the steamer would keep an eye on her and her child.  And he asked the captain to delegate a further important task to one of his more reliable officers, which was to see Louisa to the railway station in New York, and to ensure that she was put on the train to Cincinnati, where she would be reunited with her brother and sister.

In a moving postscript to the story Rogers added two interesting points.  The first was that he received a letter some months after Louisa’s departure from the captain of the steamer, who was able to confirm that he had done what Rogers had asked.  He had also carried out the doctor’s final request by giving Louisa the balance of the subscription funds, which amounted to about twenty-five pounds. 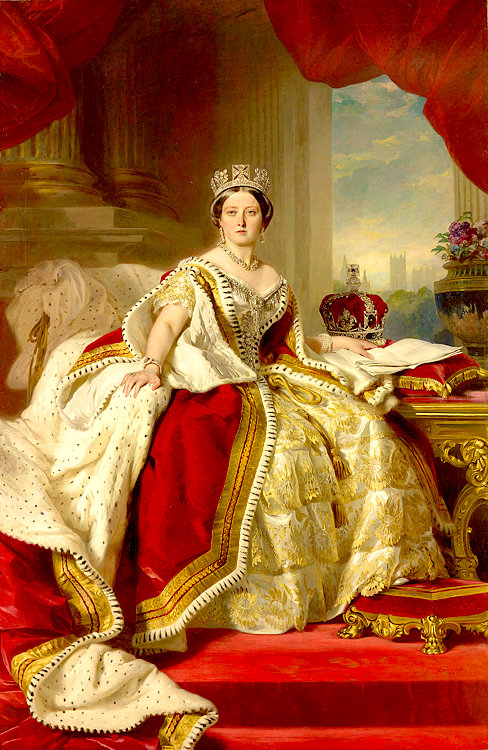 The second point was that there was “every reason” to believe that one of the subscribers was Queen Victoria.  Rogers had apparently received a letter from “a gentleman connected with the Court”, in which the monarch’s interest in the case was mentioned.  Whether this interest amounted to a donation is not entirely clear, as Rogers himself realised.  But it is at least possible, given that the Royal Family, then as now, saw fit to extend their patronage to charitable causes.  And Louisa, being German, might have been regarded with particular sympathy by a Hanoverian monarch.

PAYING TRIBUTE
Sadly, Louisa’s departure for America is the last we hear of her, and all searches for reliable evidence of her later life have drawn a blank.  But a great deal is known about Dr Joseph Rogers.  We have given a sketch of his achievements in Part One, but a full account of his work, together with a splendid portrait photograph, can be accessed by following this link.

When Rogers died, in 1889, the tributes were many and fulsome.  His gravestone in the cemetery in West Hampstead is one example.  Although constrained by the obvious need for brevity, the epitaph succeeds in celebrating the “spirit of philanthropy and justice” that was the guiding principle of the doctor’s life.  However, the finest tribute was paid by the British Medical Journal in its edition of the 13th of April 1889, part of which is worth quoting here: 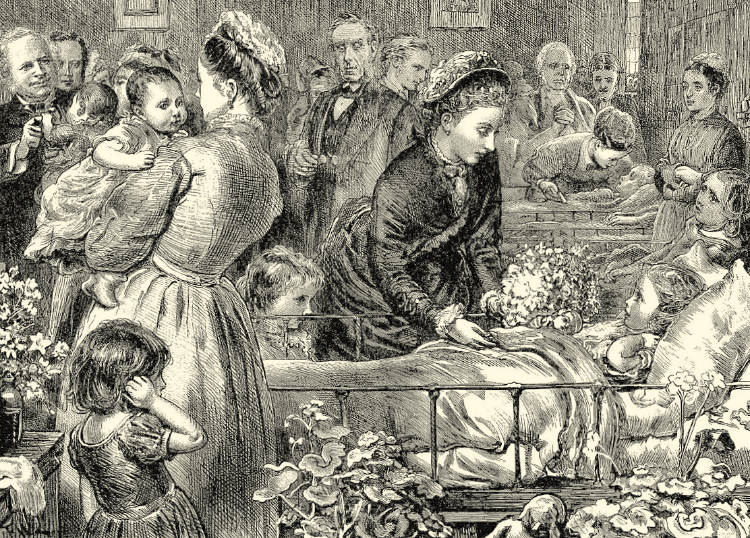 An example of royal support for charitable causes: Princess Louise at the Victoria Hospital for Sick Children.  Image in The Graphic 17 June 1876.

A lifelong guardian of the interest and welfare of his brethren; a fearless, chivalrous, ardent, and undaunted defender of the right; a champion of every just grievance; a hater of oppression and wrong-doing, his manly presence, his ringing voice, and his uncompromising orations never failed to inspire sympathy and respect even among those whom he combated or denounced.

One feels sure that Louisa Nathalie would have agreed.

The Good Doctor: Part One

The Poor Little Dear, or, The Sad Story of Sarah Gough