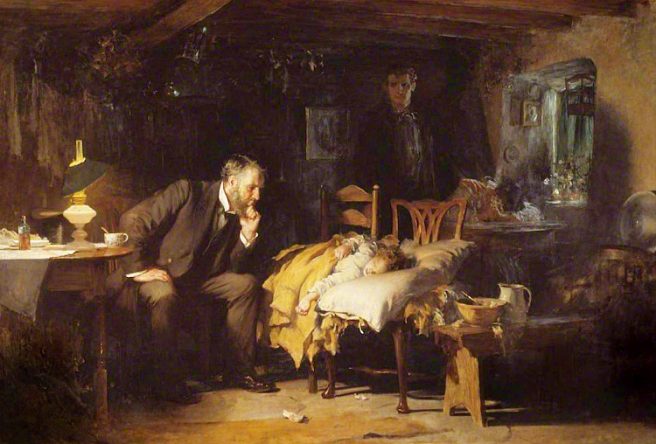 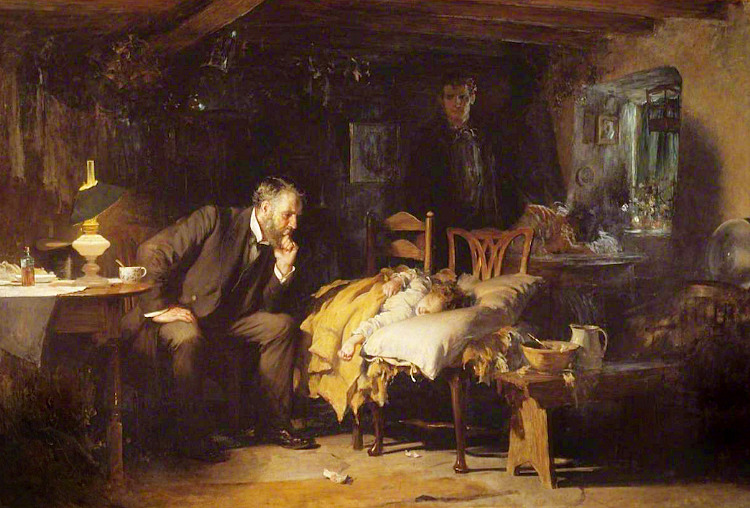 A fine study in the compassion and dedication of the medical profession, and a fitting template for Dr Joseph Rogers.  Oil painting by Luke Fildes exhibited 1891.  © Tate  CC-BY-NC-ND 3.0 (Unported)

Joseph Rogers, M.D., is a name that may well be unfamiliar to readers.  The fact is, though, that Dr Rogers was a very remarkable man.  Principally, he was a workhouse medical officer, and he devoted his energies to the care of some of the poorest members of Victorian society.  In doing so he forfeited the social advancement and financial rewards that many in his profession enjoyed, and he placed so little value on his own health that he was in the end attacked by heart disease, which dogged the last three years of his working life.  His brother, Thorold Rogers, who admired him greatly, remarked that “he literally wore himself out by his labours.”

Rogers’s commitment to improving the lives of the poor shone through in his dealings with the Strand Union workhouse in Cleveland Street, where he was appointed medical officer in 1850.  By then he had already demonstrated a concern with public health, taking an active role in burial reform, and campaigning against a window tax that did nothing to help conditions in overcrowded housing.  But his desire for change got him into trouble with the officers of the union, and, after many years of battling against the inadequacy of provisions in the workhouse and the ethos of calculated cruelty towards and neglect of its inmates, he was forced out by the guardians.

He was a great man with noble intentions, and his recollections of his work with the London poor are as uplifting as they are distressing.  But no case illustrates his generosity of spirit more tellingly than the one I am about to describe.  The year was 1863, and the main actors were a young German woman, a “gentleman” of criminal character, and, of course, Dr Joseph Rogers himself. 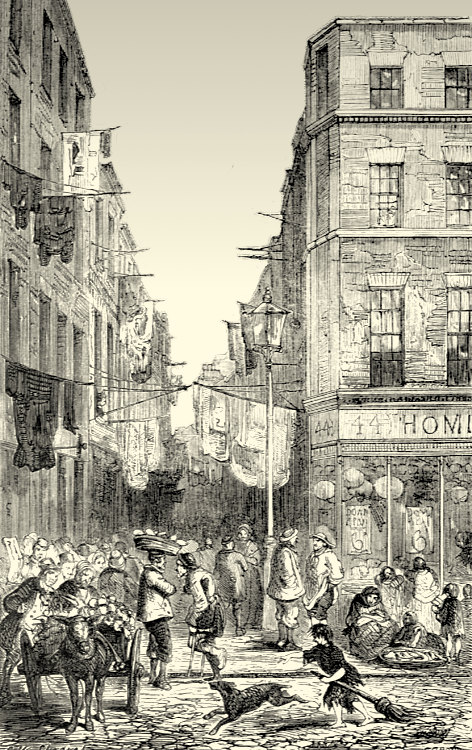 A LETTER FROM GERMANY
The young woman in question has a complicated history.  Even her name is problematic, and, although she was most probably Louisa Nathalie, there is little consistency in the sources, and “Louisa” might come out as “Louise”, and “Nathalie” might even be transformed into “Nagele”.  As stated above, she was German, but she had been living in Cincinnati in Ohio with her brother and sister, who were small farmers.  We know nothing about her life in America—only that a letter arrived one day that would turn her life upside down.

The letter had been sent by her mother in Germany.  She was very ill, and wanted to see Louisa before it was too late.  Louisa sailed to Europe without delay, but on reaching her home town she learnt that her mother had died, and had been buried eight days previously.  Selling her mother’s effects, and raising the equivalent of thirty pounds, she set off back to America via London and Liverpool, but two days out to sea the steamer on which she was sailing ran into rough weather and had to return to port for repairs.

While on board the steamer Louisa had fallen in with a young Frenchman, who had listened to her story, and especially the details of the money, with very great interest.  He persuaded her with a promise of marriage to return with him to London, where he seduced her and spent all her money before running off.  Louisa, abandoned in this callous manner, initially found a situation, but had to leave when she discovered that she was pregnant.  Penniless and friendless she sought refuge in the workhouse in Cleveland Street.

THE DESPICABLE SMITH
There for the time being we must leave Louisa Nathalie, while we turn our attention to the second actor in the drama, who was not in fact her French seducer but the “gentleman” alluded to earlier.  He was an army man—an adjutant in the 3rd Surrey Rifles—and he gave his name as James Smith.  However, as will soon become apparent, this was a false identity, a subterfuge he was forced to adopt as a consequence of his despicable behaviour.

Now the background to the criminal career of “James Smith” was the widespread practice of employing female workhouse inmates as wet nurses.  In ordinary circumstances this would have been an arrangement between a woman who had just given birth and a young and healthy inmate who was lactating.  And, indeed, on Saturday the 9th of May a workhouse girl by the name of Bridget Corrigan entered into just such an arrangement through the machinations of Smith.  This would have been all well and good had it not been for the fact that the arrangement was just a ploy.  There was no newborn child in need of breast milk, and no recent mother hoping to employ a wet nurse to provide it.

WILD COURT
What happened was this.  On the Saturday in question Mary Anne Hanlon, who ran a lodging house in Wild Court in Drury Lane, opened her door to a man she had never seen before.  As you might have guessed, the man was the so-called James Smith, and he asked Mary if a Bridget Corrigan was lodging with her.  “No,” Mary replied.  “I know there is,” Smith insisted.  “Can I see her?”  “I think not,” Mary said.  Smith then declared that he was a medical man—another lie— and that he was looking for a wet nurse for a patient of his.  Mary asked him to leave his or at least his patient’s name and address.

Smith was not expecting to be asked to furnish such precise details of a non-existent patient, and he tried to deflect the question by saying, rather vaguely, that she lived “in the Square”, which could have been almost anywhere.  As it so happened, though, Mary was herself a wet nurse, and she thought that she might know who he was referring to, namely a Miss Wrigley in Lincoln’s Inn Fields.  Smith pretended to recognise the name.  Mary then said that, if he had come from Lincoln’s Inn Fields, he had found the right person, for it was she, Mary Anne Hanlon, who was expected to wet-nurse Miss Wrigely’s child.  Disappointed in his hope of speaking to Bridget, Smith said that he would like to speak to Bridget’s mother, who he happened to know was lodging with Mary, even if Bridget was not.  When he heard that Mrs Corrigan was out, he said that he would catch her later.  He did not have time to hang around. 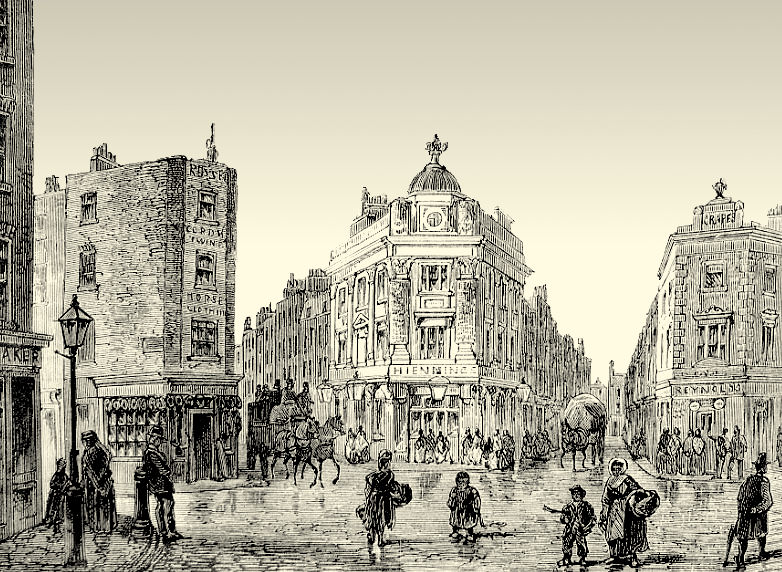 What was the man up to?  Our best guess is that he had at some point spotted Bridget going into or coming out of the lodging house in Wild Court, and assumed that she was living there, even though in reality she might simply have been visiting her mother.  Later—but only after her encounter with Smith—she certainly did live there with her mother.  But at the time of that encounter—the 9th of May—she was not lodging with Mary Anne Hanlon.  She was in fact an inmate of the St Giles workhouse, which was in Endell Street, near Seven Dials.

About ten minutes after Smith left, Bridget’s mother arrived back in Wild Court.  She was warned by Mary that a medical man had been looking for her daughter, and had said that he would call again, and Smith did indeed call again, conversing with her for some considerable time.  He must have been persuasive, because Mrs Corrigan set off for the St Giles workhouse, where she told Bridget that “a gentleman” was offering her an engagement with “a lady” as a wet nurse.  At about seven in the evening, with the permission of the workhouse, she took Bridget out into Endell Street, where James Smith was waiting near the public baths, as arranged.  Smith told Bridget to fetch her best clothes, and to be quick about it, as he only had half an hour to spare.  When she returned, he walked her up to Oxford Street, glancing back once or twice at her suspicious mother on the way.  In Oxford Street he instructed a cab to drive him and his companion to Pickett Place in the Strand. 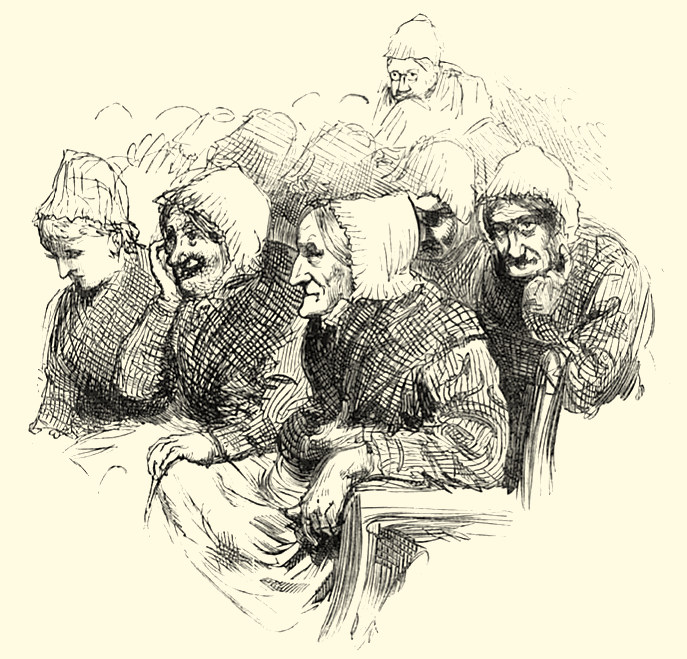 PICKETT PLACE
When they arrived in Pickett Place, Bridget must have begun to wonder what exactly was going on, for Smith left her sitting in the cab, while he got out and went up a flight of steps leading to a huddle of dwellings known as Crown Court.  She watched as he disappeared into a house.  Two or three minutes later he emerged and beckoned to Bridget from the top of the steps.  Ordering her to follow him indoors and upstairs, and quickly, he led her into a first-floor room, where he made her sit down.

Sitting there, looking around and thinking that nothing in the room suggested “a lady” in need of a wet nurse for a newborn child, Bridget felt uneasy.  She said that she wanted to meet the mother.  Smith said that she would be there in five minutes, adding, as if to answer the question he knew Bridget was about to ask, that he was a doctor at the hospital in Queen Square, which was near the Foundling Hospital in Bloomsbury.  “And I wish to examine you—medically.”

Bridget, who by now was under no illusions about what was happening to her, flatly refused.  “I do not believe you are a doctor,” she told Smith.  As if to set her mind at ease Smith said that he would fetch the mother, returning shortly to announce that she was not dressed.  Then he made his move, attempting to take liberties with Bridget.  And when he failed—Bridget resisted his advances—he tried to buy her favours instead.  He offered her five shillings a week for her sexual services up to the time of her confinement, guaranteed her a bed at the Queen Square hospital, and assured that “the lady” would pay to have Bridget’s baby nursed so that Bridget could nurse her baby, for which she would pay her twenty shillings a week. 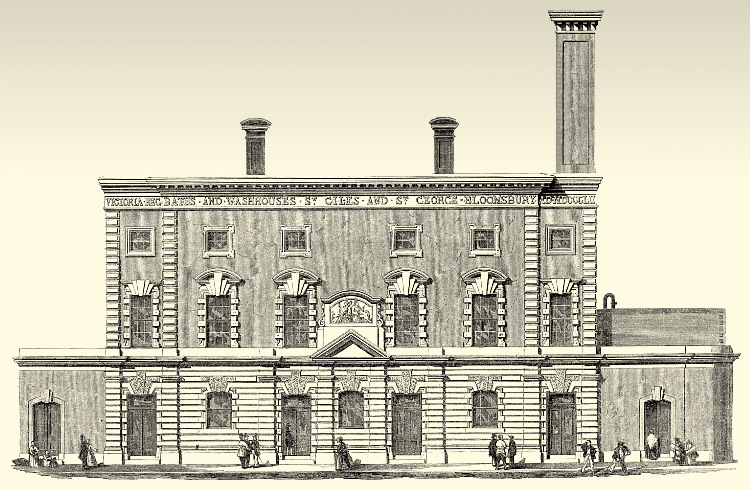 The public baths and washhouses in Endell Street.  Image in The Builder 23 July 1853.

When Bridget turned down the proposal, Smith took his coat and hat and left the room, saying again that he would fetch “the lady”.  Bridget went downstairs, where a woman told her that “the gentleman” had gone.  “What sort of house is this?” Bridget asked the woman.  Receiving only an evasive answer she inferred that the house she had been brought to, in that insalubrious corner of the Strand, was a brothel …  TO BE CONTINUED

The Cradle and the Coffin, or, The Sadness of Elizabeth Brewer

Death in the Dials: Part One