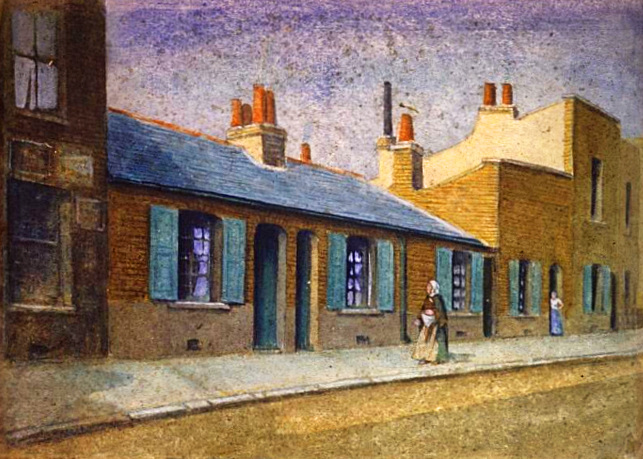 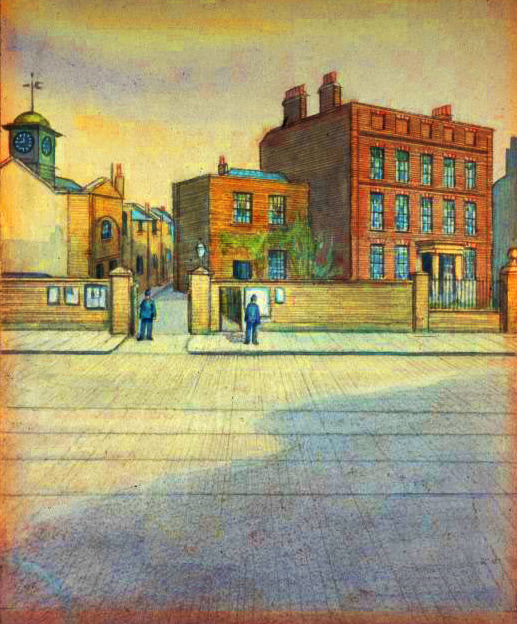 Readers of this blog with long memories will doubtless recall the story of the Peckham Ghost, which we posted last year.  The ghost caused quite a stir, and made a fool of Inspector Gedge and the local constabulary.  Gedge and his wife Rosina and a staggering thirty-eight constables occupied the house next to the police station in Peckham High Street.  As it so happens, we know what the police station would have looked like, for it was painted in 1927 by one Guy Miller, and Guy Miller is the subject of this post.

The painting of the police station in Peckham is one of a series produced by Miller in the 1920s.  The collection was eventually acquired by the Cuming Museum in Walworth Road, and, although the museum building was rendered inoperative by a disastrous fire in 2013, the paintings can be accessed online at the Southwark Council website.  They are beautifully executed works, and they express a powerful sense of place—principally Peckham and Camberwell—and period.  If it is the case that places are immortalised by artists, then Miller arguably did for South East London what the impressionists did for Argenteuil, or Lowry for the industrial North West.  But let us begin at the beginning. 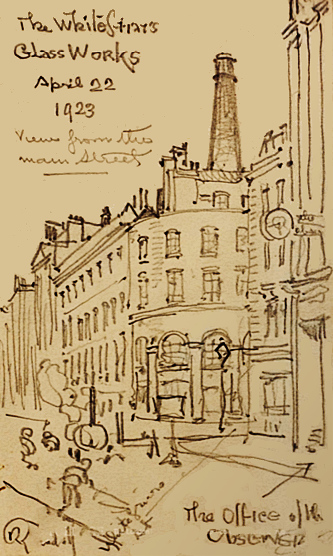 NATURE AND NURTURE
Guy Miller—full name Hubert Guy Miller—was born in 1881 in Clapham.  His father, Alfred Phoenix Miller, was at the time a house decorator, although later, in the 1891 census, he describes himself as a church decorator.  One assumes that the latter occupation was more prestigious than the former.  By then the family had moved down to an address in Colliers Wood—6 Gothic Villas in Robinson Road—where both their immediate neighbours were lithographic printers.  The young Guy Miller seemed destined both by nature and by nurture for a career in the decorative arts.

And in fact before long Miller was working as a stained glass painter.  In 1895 at the age of thirteen he had joined the firm of James Powell & Sons as an apprentice.  The Powells owned the Whitefriars Glass Works in Tudor Street—between Fleet Street and the river—and their contribution to the revival of the English stained glass window tradition was enormous.

The young apprentice must have shown promise, for in 1898 the London County Council awarded him an exhibition worth five pounds a year, which enabled him to attend evening art classes in order to develop the skills he was using in his daytime work as an employee of the Tudor Street firm.  In his early twenties he was involved in some important commissions, which included the windows for the Memorial Chapel in Holy Trinity Sloane Street—a magnificent Arts and Crafts edifice—and the Lady Chapel of the Liverpool Anglican Cathedral. 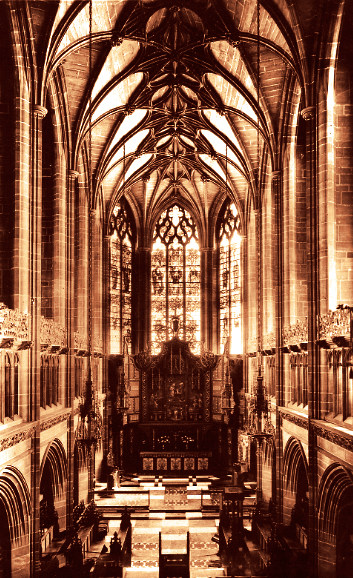 In due course Miller enrolled at the Central School of Arts and Crafts—now the Central School of Art and Design—which had been founded at Morley Hall in Regent Street by the London County Council in 1896.  There he studied under Christopher Whitworth Whall, who both as practitioner and as teacher was an iconic figure in the art of stained glass.  His success can be measured by the many cartoons for stained glass windows that were accepted by the Royal Academy for its summer exhibitions.  The range of these submissions was remarkable, and religious themes were complemented by work for commercial clients.

Miller was also closely associated with the South London Art Gallery, which shared its evolution, and indeed its site, with the Camberwell School of Arts and Crafts.  Almost certainly he took advantage of the School’s evening classes—and presumably his London County Council award—to develop his considerable artistic talents.

In fact Miller went on to join the teaching staff, and from 1931 until his death in 1948 he was curator of the Gallery.  The work on display there represented both fine and industrial art, and some idea of its subject matter may be gleaned from an entry in a museums and art galleries year book referring to drawings of Camberwell past and present.  The project was very much what it claimed to be in its manifesto, namely a window on to the lives of ordinary—dare we say overlooked?—Londoners. 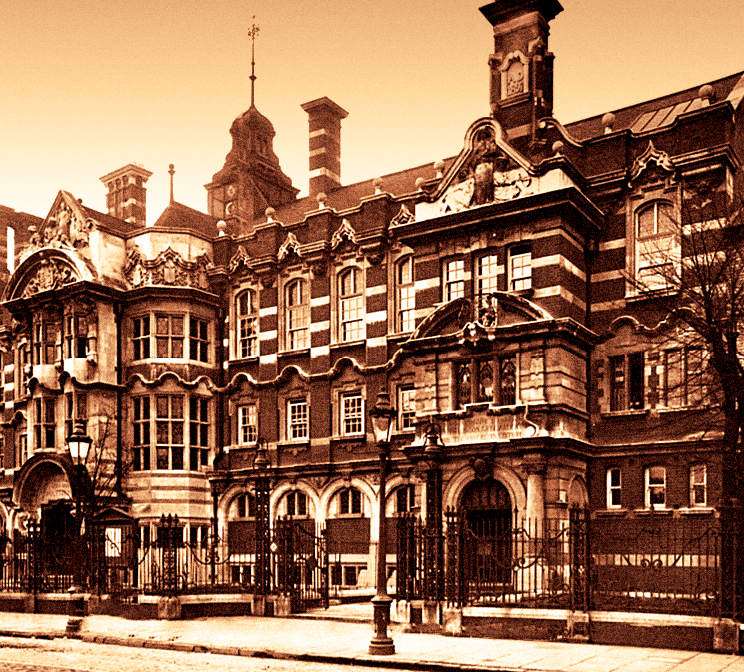 WATERING THE DESERT
The Gallery had an interesting history.  In 1868 a teacher and writer of text books by the name of William Rossiter established a Working Men’s College for South London in Blackfriars Road.  Rossiter, who was then in his mid-thirties, had been a student at a similar college in Great Ormond Street, and it was his ambition to extend to others the many benefits of which he had been the grateful recipient.  He was the son of a Holborn portmanteau maker, and he had started his own working life as a trunk maker, but now, as a member of several learned societies, he embodied the transformative power of education.  The first principal of the Blackfriars Road college was the famous biologist Thomas Henry Huxley—“Darwin’s Bulldog”—who was a committed advocate of adult education.  In 1878 the college moved down to larger premises in Kennington Lane, and it was there that its scope was extended to include first a free library and then an art gallery.  In due course the gallery moved to Battersea and then to Camberwell—described by Rossiter as the “great intellectual desert” of South London—and after yet another move it opened in Peckham Road in 1891.

The gallery attracted a number of eminent backers, including Gladstone and high-profile contemporary artists.  But the very people whom Rossiter was striving to educate—the residents of the South London slums—gave his enterprise a rough reception.  He and his colleagues were regarded as unwelcome outsiders.  “We got cabbage stumps shied at our heads,” he recalled.  Boys as young as three or four challenged them to fights.  The neighbourhood children swore at them, and, even when they could be persuaded to walk round the gallery, they were liable to throw objects at the exhibits. 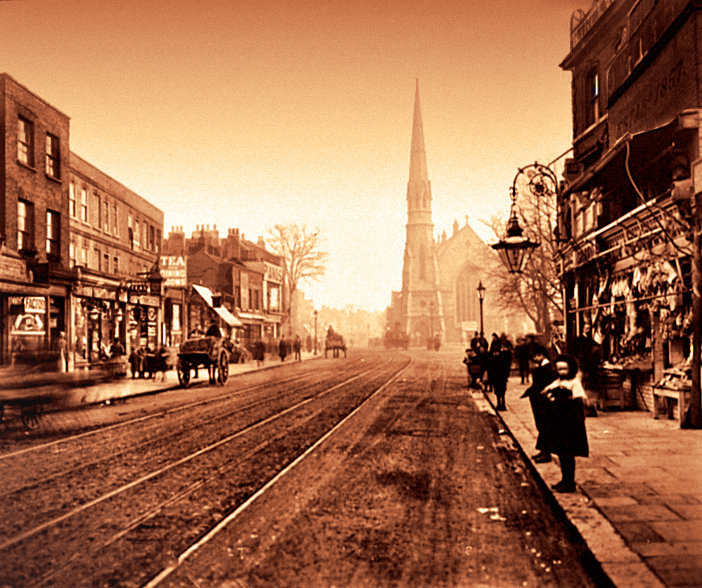 A view of Peckham in the early years of the South London Art Gallery.  Photograph dated 1905.  © London Picture Archive

ALL NOW GONE
However, Rossiter did in the end win hearts and minds, and by the time Guy Miller was appointed as curator, some forty years after its arrival in Peckham, the South London Art Gallery was a fully fledged art institution.  Details of Miller’s life are hard to come by.  Certainly he was the committed socialist whose views on the unifying of “the workers of the world” were discussed in The Clarion in 1909, and he may have been the Guy Miller who served as a private with the Royal West Kent Regiment—service number G/39941—during the First World War.  But mainly we know him as a craftsman and an artist.  He exhibited frequently, and judging from comments in the newspapers his work was appreciated. 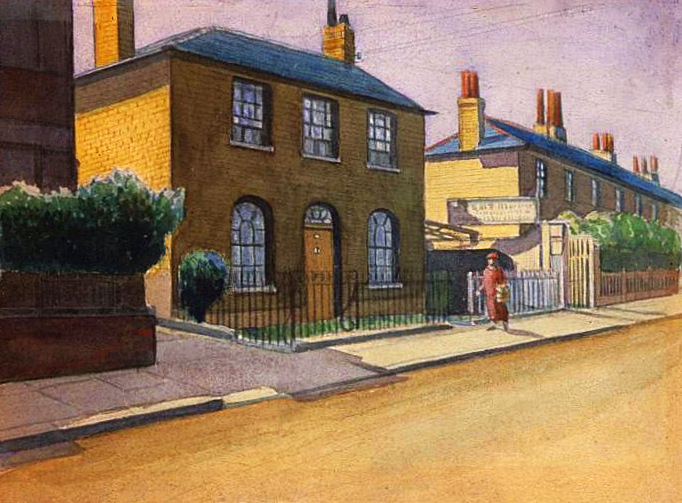 The house that had once belonged to the writer Mary Ann Kelty in Hanover Street.  Watercolour by Guy Miller dated 1925.  © Southwark Council

The most telling of these newspaper notices appeared in The West Sussex Gazette in 1932 in a review of “local art” at the Royal Academy summer exhibition.  Miller, who had so often in the past submitted designs for stained glass, was now exhibiting a painting, the subject of which was the south side of Peckham Road.  Although nothing more is known of the painting, it is a fair guess that it was in the style and spirit of the portfolio of his work that came to reside in the Cuming Museum. 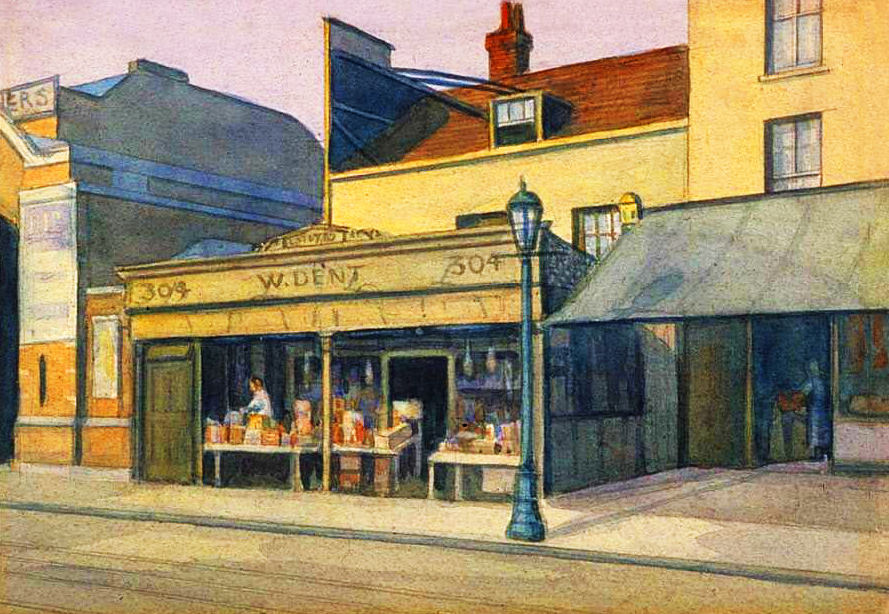 What delights! Streets and houses are depicted with a sympathy that finds beauty in ordinariness.  Mary Ann Kelty’s house in Hanover Street has the poetic desolation of a Hopper.  Other scenes move us with their sense of the passage of time—cottages built for bargees, an eighteenth-century tavern, an old parish pump—and they evoke a gentle melancholy.  Buildings painted by Miller did indeed disappear in his lifetime—the grocer’s shop in Camberwell Road is just one example—and he used his art to keep their memory alive. 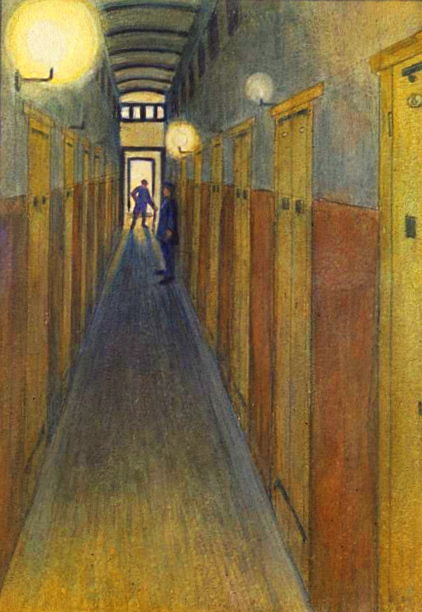 A QUINTESSENTIAL ARTISAN
The painting of the grocer’s shop derives its vitality from Miller’s deep interest in the lives of working men and women.  And of course these lives could be hard.  The casual ward of the workhouse in Gordon Road was seen by the artist as a starkly utilitarian building that looked not unlike a prison.  The landscape was industrial.  Accordingly he painted more than one brewery—Camberwell was renowned for its public-houses—and more than view of the Camberwell branch of the Grand Surrey Canal.  In fact Miller was an exact contemporary of Algernon Newton—for whom see my earlier post—and it is not impossible that he was influenced by the painter who was known as the “Canaletto” of the twentieth century.  Of course it could be that Newton was influenced by Miller.  Certainly it would be remarkable if neither was aware of the other’s work.

Influence or no influence, Miller’s urban art has an authenticity that Newton’s lacks.  Miller belonged to this transpontine world: Newton merely visited.  His instincts were not so much those of the fine artist as of the quintessential artisan.  Yes, he exhibited often at the Royal Academy.  But one cannot help feeling that his real artistic home was not Burlington House in Piccadilly but the little gallery in the Peckham Road.