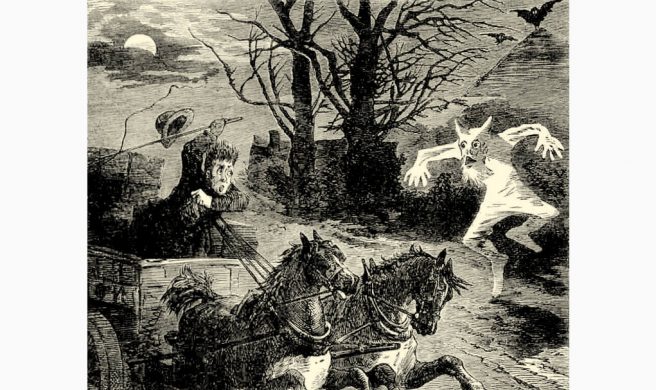 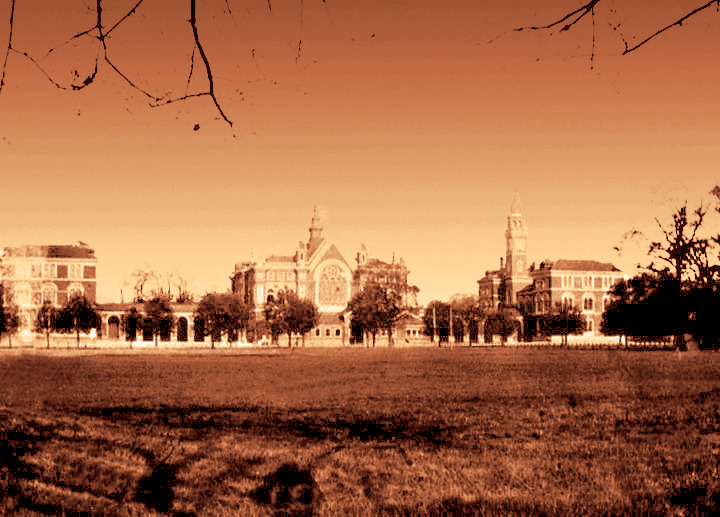 Just before 7 p.m. on Sunday the 10th of November 1872.  Misses Margaret and Constance Carver were preparing to go to church with their governess, Mary Prentice.  They were daughters of Canon Alfred Carver, headmaster of Dulwich College, and they lived with their family in the south wing of the new College buildings in semi-rural Dulwich.

Margaret, who at thirteen years of age was the younger of the two girls, opened the door to step out on to the carriage drive.  Noticing how curiously dark it was—the nearest gas lamp was not lit—she was alarmed to see a tall white ghostly figure.  With arms outstretched the figure leapt across the drive not twenty feet from where she stood.  Coming down the steps, Constance and Mary also spotted the spectre, but he disappeared as suddenly as he had appeared.  This they thought odd, as his gleaming whiteness had made him very noticeable. That night an extensive search of the garden and grounds was conducted, but it failed to reveal any sign of the spectre.  It was only in the morning that an examination of the shrubbery showed that something—or someone—had been hiding in the bushes near the house.

This was not the first or the last sighting of what would become known as the Peckham Ghost.  He—the ghost was always identified as male—was first seen outside Honor Oak Church, where he vaulted over walls and fences, pursued by a group of navvies who did not take kindly to being frightened.  He measured over six feet in height, and sometimes even a good eight feet, and, as we have seen, he liked to approach his terrified victims with arms wide open.  Rumours of the white-clothed ghost quickly unnerved the good people of south London. 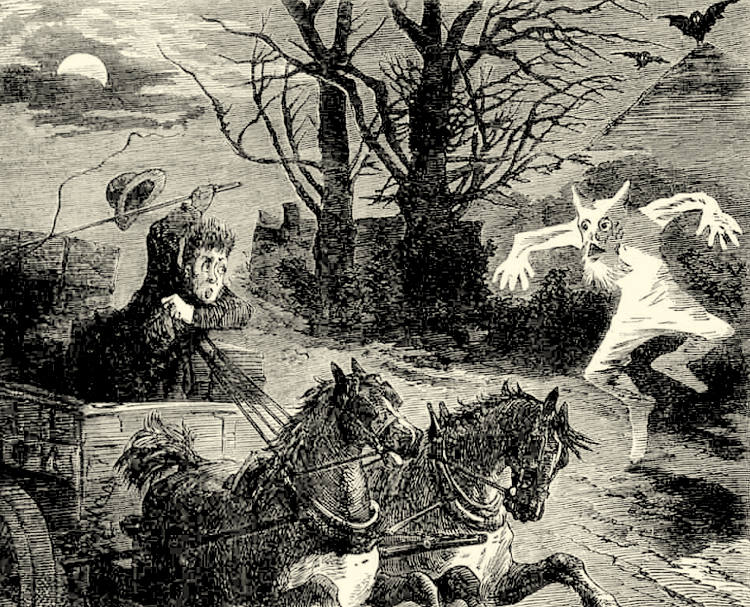 JACK’S BACK!
The ghost was to frighten dozens of people, mainly picking on women and children, and he was described by them in broadly similar terms.  He was tall, although what it was for him to be tall was of course relative to the height of any particular witness.  He materialised from the shadows, gleaming in his white apparel, and making odd noises. Someone later claimed that he wore a grey curly-haired wig, which made him a vain ghost as well as a scary one.  Even in one’s own home one was not safe from his attentions: there were curious tappings and a rattling of windows and shutters when respectable Peckamites were abed.

There were rumours that Spring-Heeled Jack, the “supernatural” being who had frightened many a London servant girl in the 1830s, had reappeared.  This figure of urban legend was known for his extraordinary leaps, and was reported to wear a black cloak over a tight-fitting white oilskin.  So some similarities there.  On the other hand Jack breathed blue fire, and had glowing red eyes and clawed hands, features which were not manifested in Peckham.

It would seem that even the fit and the strong were not always safe.  One evening, not long after the Dulwich sighting, the carrier who transported goods between Camberwell, Peckham, East Dulwich and Honor Oak, was trundling his wagon along Lordship Lane, and on reaching Mr Dawson’s field, where the ghost was waiting for him, he was given a terrible fright.  The newspapers noted tartly that, rather than rounding on the apparition with his whip, the man drove off as fast as he could in order to escape, and broke the speed limit for wagons—four miles an hour—in his haste.

The newspapers also speculated how the ghost was able to disappear so rapidly: one moment he was clearly seen in his white garb and the next he was gone.  Not convinced that he had supernatural origins, they suggested that he was dressed in a heavy overcoat, rather like an Ulster, which had a white lining.  He would open the coat, flashing its pale lining, and promptly close it again.  Camouflaged in this way he would slip into the gloom. 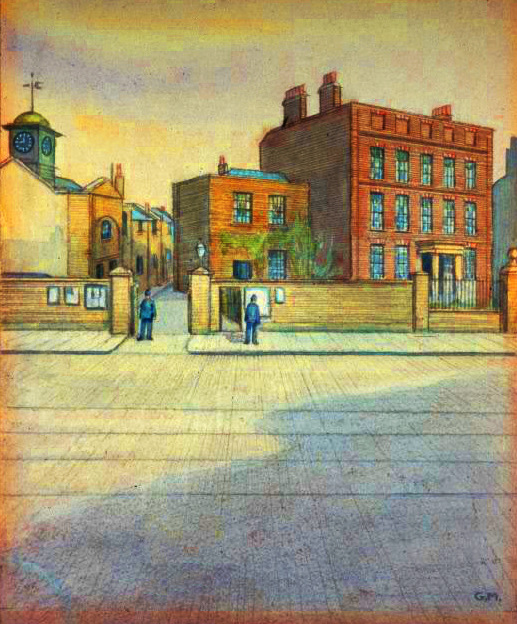 WE ARE NOT AMUSED
Several weeks of this haunting left the residents unamused.  After all, the local police—and there were enough of them in Peckham—seemed no closer to catching the ghost.  The officer in charge was Inspector Arthur Gedge, a native of Suffolk and veteran of twenty years’ service.  Gedge resided with his wife Rosina in the police house next to the police station—at 173 High Street in Peckham—which had in previous years been a convent and part of a mansion belonging to the wealthy Dalton family.  Living with the Gedges were the thirty-eight policemen who made up P division.  That is a good number of officers, so it is not surprising that there was criticism of their failure to apprehend the spectre.  Perhaps being located next to a brewery tap is not the way to concentrate the collective mind.

One local family was the Ayres, who had recently moved from Islington to live at 1 Bath Place in Charles Street.  Thomas, the father, had previously worked as a fishmonger.  Now, like many of his neighbours, he worked as a labourer, no doubt to feed the building boom as Peckham was transformed from a semi-rural area to the built-up suburb of today.  Other members of the family were his wife Sarah and children Thomas, Matilda, Eliza and John. 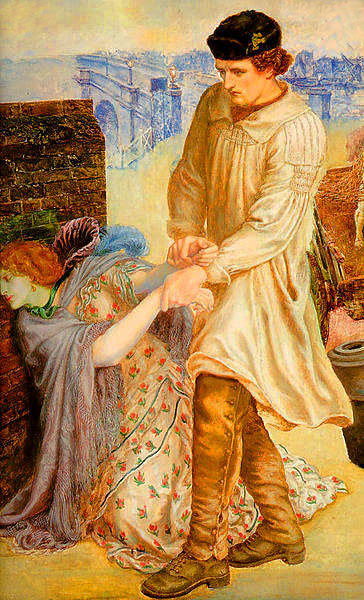 On Thursday the 28th of November twelve-year-old Matilda Ayres helped her father catch and kill a rabbit, and at about 8 p.m. she was sent out to dispose of the inedible bits, alone, which is a surprise in view of the ghostly episodes in the neighbourhood.  Near the Alliance Tavern in Sumner Road the girl jumped when a dark presence loomed out from the shadows, spread its arms and suddenly became entirely white.  She identified its garment as a “slop”, which might refer to the white clothes worn by a sailor, a butcher’s apron, cheap ready-to-wear clothing, or—and this is probably what she meant—a countryman’s white smock.  Having experienced the scary noises and the outstretched arms, Matilda rushed home to tell her parents.  She obviously was not particularly traumatised, as thirty minutes later she was in John Street and saw the man/ghost again.

A NEW WIG ON AN OLD GHOST
At about the same time twelve-year-old Arthur Ridgway was hurrying home with a half-gallon stone bottle of beer to 2 Bath Place, where he lived with his father William, a labourer, his mother Emma, who took in washing, his three older brothers and his two sisters.  The Ayres and Ridgway families were neighbours, and Arthur and Matilda probably attended the same local school on the corner of Sumner and Middle Streets.  Arthur met the ghost as he came along Camden Street, just a short distance from home at the corner with Cator Road.  So thoroughly frightened was the boy that he dropped the bottle with its precious liquid and started to run away.  Within seconds he had made a quick calculation of what scared him more, the ghost or his father, who was no doubt waiting for some liquid refreshment after a hard day’s labouring.  Arthur sprinted back to rescue the bottle.  Like Matilda, he had been frightened by the ghost once already, so he was now familiar with his appearance.  But there had been a change, and the ghost this time was sporting a curly-haired wig.

News of these local sightings brought men and boys out on to the street.  The ghost was eventually run to ground while trying to gain admittance to a house in Sumner Road.  Disappointingly, he did not pass through a closed door.  Proving instead to be only too human, he was arrested by two police constables.

On Friday the 6th of December a Joseph Munday, aged forty-three, appeared before Mr Chance at Lambeth Police Court, where he identified himself as a labourer of no fixed abode.  He was charged with loitering in Bath Place and frightening Matilda Ayres, Arthur Ridgway and others.  Inspector Gedge of P Division confirmed that there had been numerous complaints about the ghost in the last month.  The arresting officer, Police Constable Hills, was called and said that when apprehended the man was wearing a dark overcoat with a long white smock underneath.  He was also carrying a two-foot stick wrapped in another black overcoat.  The prisoner was told to open his coat, which he did, revealing a long white smock. 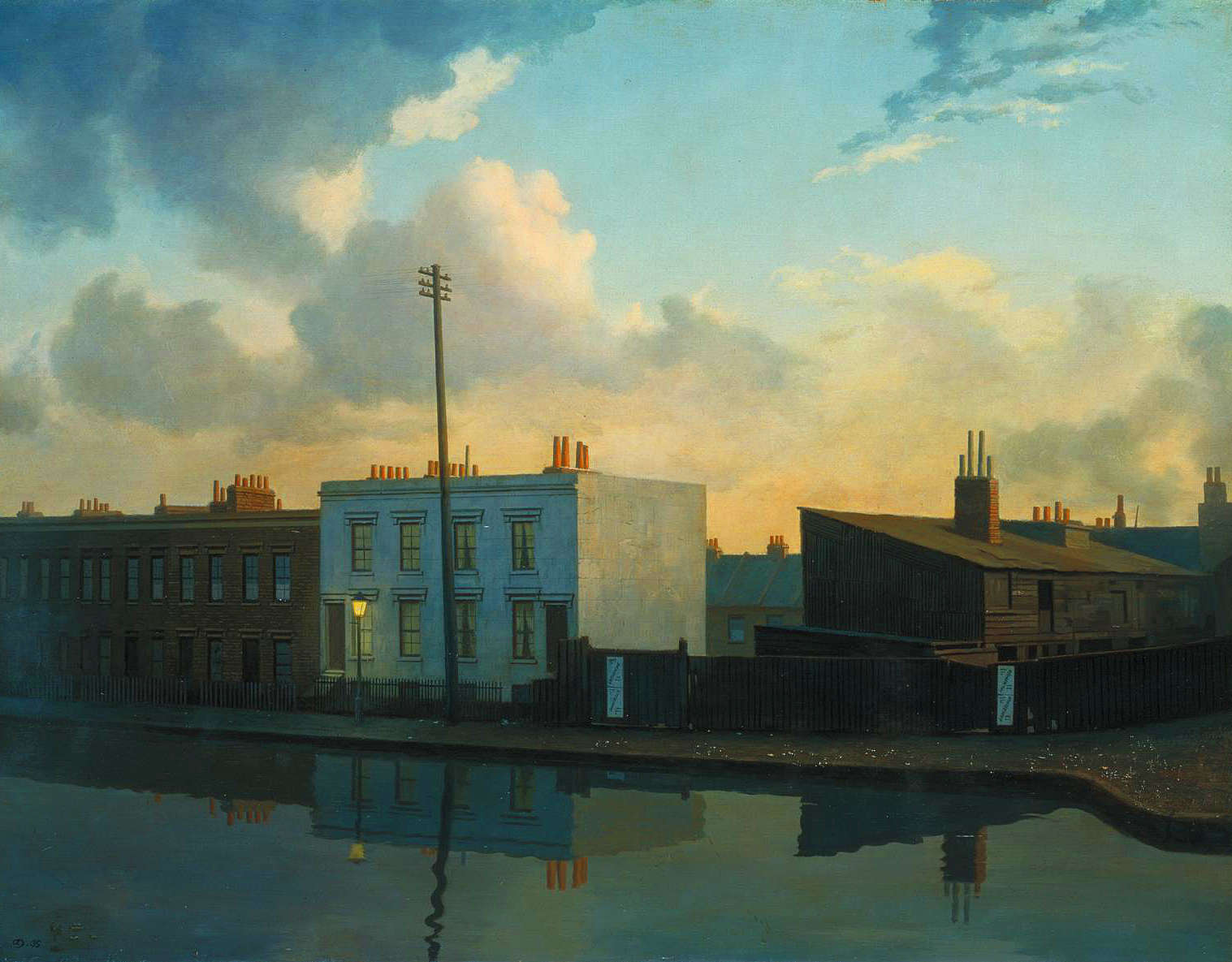 Smock or no smock, popular descriptions of the tall ghostly figure did not match the real Mr Munday. He was brawny and “singular looking”, although sadly none of the newspaper accounts explained in any detail what made him singular.  Joseph declared that he was as innocent as a newborn baby, that the peas found in his pockets were for when he was peckish, and certainly not for throwing at windows, and that he certainly would not have worn his white slop if he had known it would have led him to court.  He explained that he had called at Bath Place to visit a man called Hall, and that when Hall was not in he had found himself set on and arrested.  A John Coles was called, and said that the man used to live next door but one to him in Cowley Place, overlooking the Peckham Branch of the Grand Surrey Canal.  Mr Chance bailed Munday to keep the peace at the princely sum of ten pounds, but the homeless man had no money, and he was put into custody for six months.  The Peckham Ghost was laid to rest.

AND THEN …
Sadly, I have failed to locate the Peckham ghost.  There are plenty of Joseph Mundays born about the same time, but I have found no definite links to the pea-throwing spectre.  So was he a victim of mistaken identity?  Or was he a practical joker who took things too far?  Or was he just unwell?  I cannot say for sure.

The other characters in this tale have been easier to trace.  The Ayres moved back to Islington—perhaps haunted Peckham proved a little too much.  Matilda married a coal porter called Willis in 1878.  She raised a family while working as a laundress, but was widowed and remarried a retired printer, Thomas Phipps, returning to Peckham to live at 38 Cator Street until her death only a few months later in 1920.  Arthur Ridgway became a labourer, married and remained a Peckham resident until he died in 1938.  And Inspector Gedge?  He retired from the force in October 1876 on the grounds of long service and defective eyesight, and with a pension of a hundred and eight pounds per annum.  For the rest of his life he worked as a chemist’s clerk, leaving eight hundred and seventy-four pounds on his death in 1911.

The Witch of Moorgate