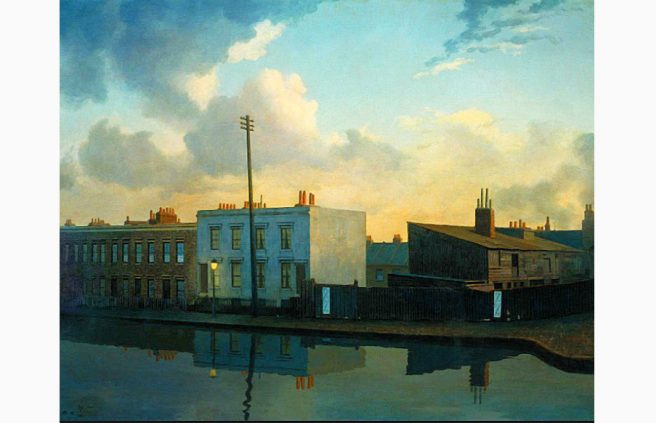 If you read our recent post on The Peckham Ghost, you will remember the haunting picture of the Surrey Canal at Camberwell, which was painted in 1935 by Algernon Newton.  The canal is no more, but in its heyday it snaked through the southern stretches of the capital.  So it is not unreasonable to look on it as a Londoner of sorts, and an overlooked Londoner at that.  And, as such, it is a fitting subject for our blog.

BUILDING THE CANAL
Engineers had been talking about the practicalities of digging waterways in south London since the late 1700s, and in 1801 an Act of Parliament was passed that authorised the construction of what would become the Grand Surrey Canal.  The first engineer was the eccentric Ralph Dodd, who in 1798 had attempted—unsuccessfully—to drive a tunnel under the Thames to connect Tilbury and Gravesend.  He was assisted by his sons Barrodall and George, and his clerk of works, one Robert Dodd, may also have been related to him.  He was paid the handsome salary of £600 per annum, but he was constantly at loggerheads with the chairman of the company, and in April 1802 he was paid off with a gratuity, and replaced by John Rennie, a Scottish civil engineer of great distinction.

On Mogg’s 1806 map the Grand Surrey Canal is the thin blue waterway travelling south from the river at Rotherhithe.

In 1807, on a cold but sunny Friday in March, a first section of canal was opened with much pomp and circumstance.  Spectators cheered, cannons were fired, and a military band played “God the King” and “Rule Britannia”.  At this early stage the canal started at Rotherhithe and went only as far as the Old Kent Road.  By studying contemporary maps—Horwood’s and Mogg’s—one can follow its route as it zigzagged across fields on its way south and west.  The Grand Surrey was not yet the canal of urban lore, the brown and oily “cut” oozing along the back streets and beneath the gasometers, its towpath half-hidden by weeds.  That would come later.

By the end of the decade the canal had been extended to Addington Square in Camberwell, and a branch running south to Peckham was completed in 1826.  Its total length was a little over four miles, and it drew its water principally from the Thames, but also from other rivers and streams that entered its course.  The Act made an exception of the River Wandle—its waters were needed to power the many mills built along its banks—but in the event the canal never got that far.  The project ran out of steam and money. 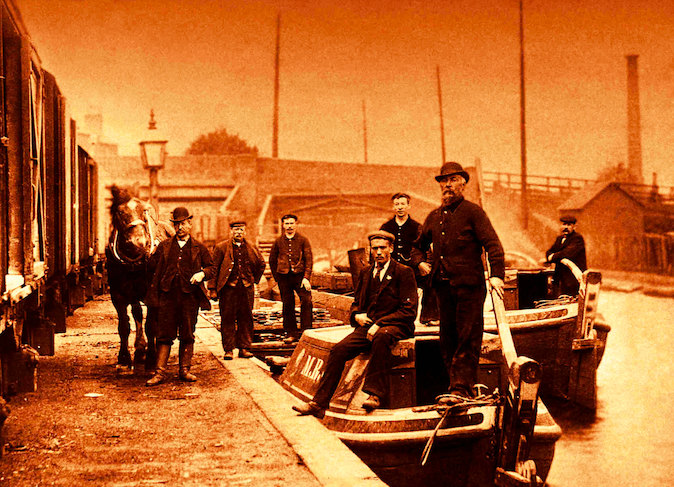 Not the Grand Surrey but the Lifford Canal in Kings Norton in Birmingham.  Date unknown but probably early twentieth century.

USING THE CANAL
The canal was used mainly for transporting freight, and vessels laden with heavy goods inched their way to and from the docks at Rotherhithe.  Their cargo was metal and coal, and above all the timber that fed the building boom of the early Victorian period.  The canal itself was industrialised, with brick kilns and lime works and paint and glue factories squatting alongside it.  The towpath was used by pedestrians, and its water was piped away to be used to clean streets and to supply factories and homes.

There were ambitious schemes for extending the canal.  In 1835 branches to the Thames at Deptford and Vauxhall were proposed, a link that would have been two and a half miles shorter than the route along the river.  In 1850 it was suggested that the distance from Reading to Deptford might be halved by communicating with the Kennet and Avon Canal.  Both schemes failed for want of sufficient funding.

As the century wore on, the canal continued to provide important transport for timber, and the South Metropolitan Gas Company hauled coal on tugs and barges to its gas works on the Old Kent Road.  But as the docks at Rotherhithe steadily expanded, the configuration of locks and basins changed.  By the early years of the twentieth century these new works had absorbed almost a mile of the original canal.  Tough times lay ahead. 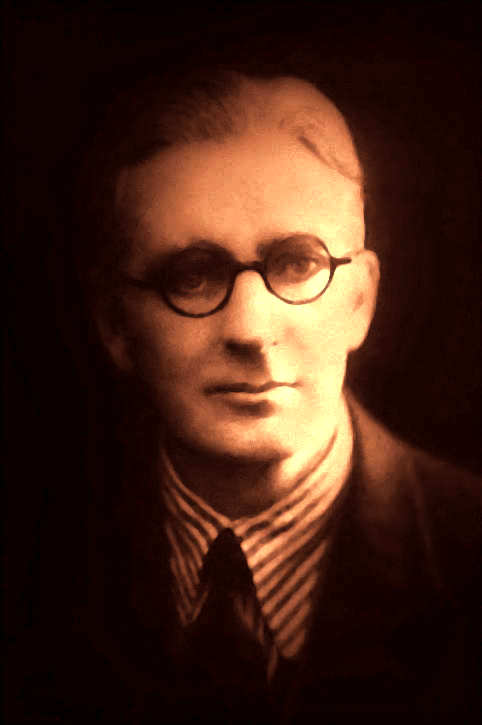 Photograph of a young Algernon Newton.

AN ENGLISH CANALETTO
And it is at this point that we must introduce Algernon Newton—full name Algernon Cecil Newton—into the story of the Grand Surrey Canal.  He was born on the 23rd of February 1880 in Hampstead, the youngest of eight children of Arthur Newton and his wife Georgina.  In 1832 Arthur’s father Henry had co-founded the firm of Winsor & Newton—suppliers of fine art materials—and Arthur was himself a colour manufacturer.  Therefore Algernon had painting pretty well in his blood, and he studied at the School of Animal Painting in Baker Street, and then at the Slade and at the London School of Art in Kensington.

In the Great War Newton served in the Royal Naval Volunteer Reserve with the rank of Sub-Lieutenant.  However, his health was not good, and after a spell of pneumonia he was forced to resign his commission.  He then enlisted as a trooper in the Royal 1st Devon Yeomanry, but in 1916 he was invalidated out of the army.  He lived first in Cornwall, and later in London, where his work was shown at the Royal Academy and at the New English Art Club. 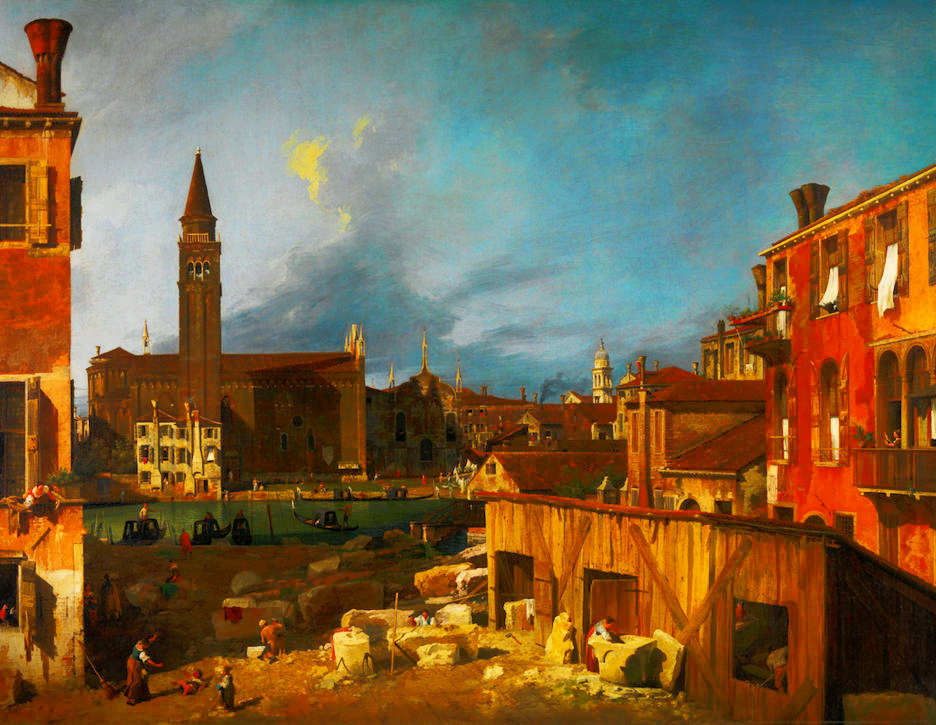 Before all else Newton was a landscapist.  But he was also fascinated by the work of Canaletto, and he learnt from the Venetian master to search for his subjects in urban settings.  In his memoirs he recounts how he wandered the streets of the capital, where he discovered a strange beauty in scenes of dereliction and decay.  “A certain sadness,” he wrote, “hung over the sordid streets and backwaters of London.” 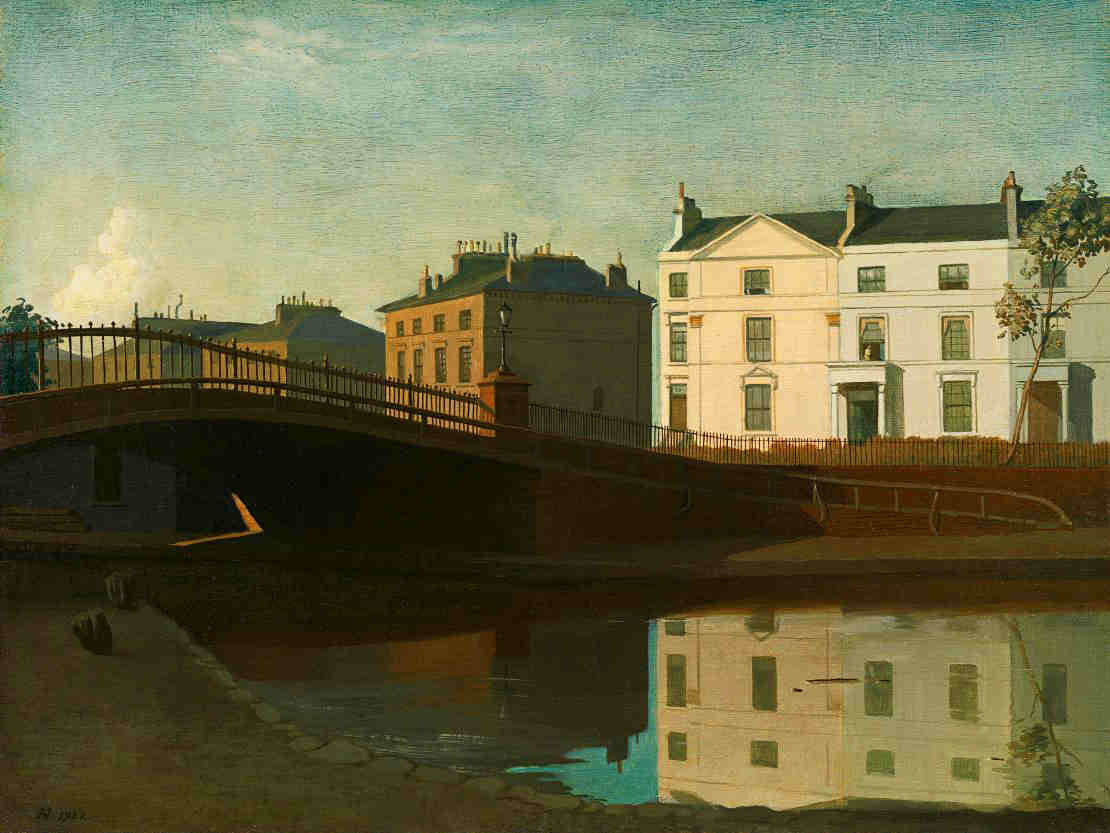 The views of the Regent’s Canal that he painted in the mid 1920s were the first examples of a theme that Newton would return to again and again over very many years.  One evening he saw a

rather dirty neglected-looking white house standing by the dark water of the canal in a dim half-light.  It seemed to me that it was not the bricks and stucco that I wanted to express but the ghostly presence of its past fading into the night.

He painted what other artists might dismiss as unpaintable.  The “gleams of sunlight” lighting up a drab building.  The pale clouds “drifting through golden veils of smoke”.  The gasometer, which to his way of thinking could make “as beautiful a picture as a palace on the Grand Canal” in Venice.  “It simply depends on the artist’s vision.”

DOWN BY THE GRAND SURREY CANAL
Our two stories come into contact in the year 1935, when Newton painted a stretch of the Grand Surrey Canal in Camberwell.  There could be no finer example of the artist’s personal aesthetic.  A row of modest dark-coloured brick dwellings leads in from the left of the picture, and ends with a grander white-painted house.  To the right of the picture are sheds built of slatted timber.  In the foreground is the canal, its gently rippled surface reflecting the buildings and the telegraph pole that stands tall in front of and above the white house.  The sky, which occupies half the view, is blue at the top of the picture, but lemony where it meets the rooftops.  One’s eye roves over all these details but is always drawn back to the the street light outside the white house, its lamp a brilliant yellow.  There is not a soul in sight. 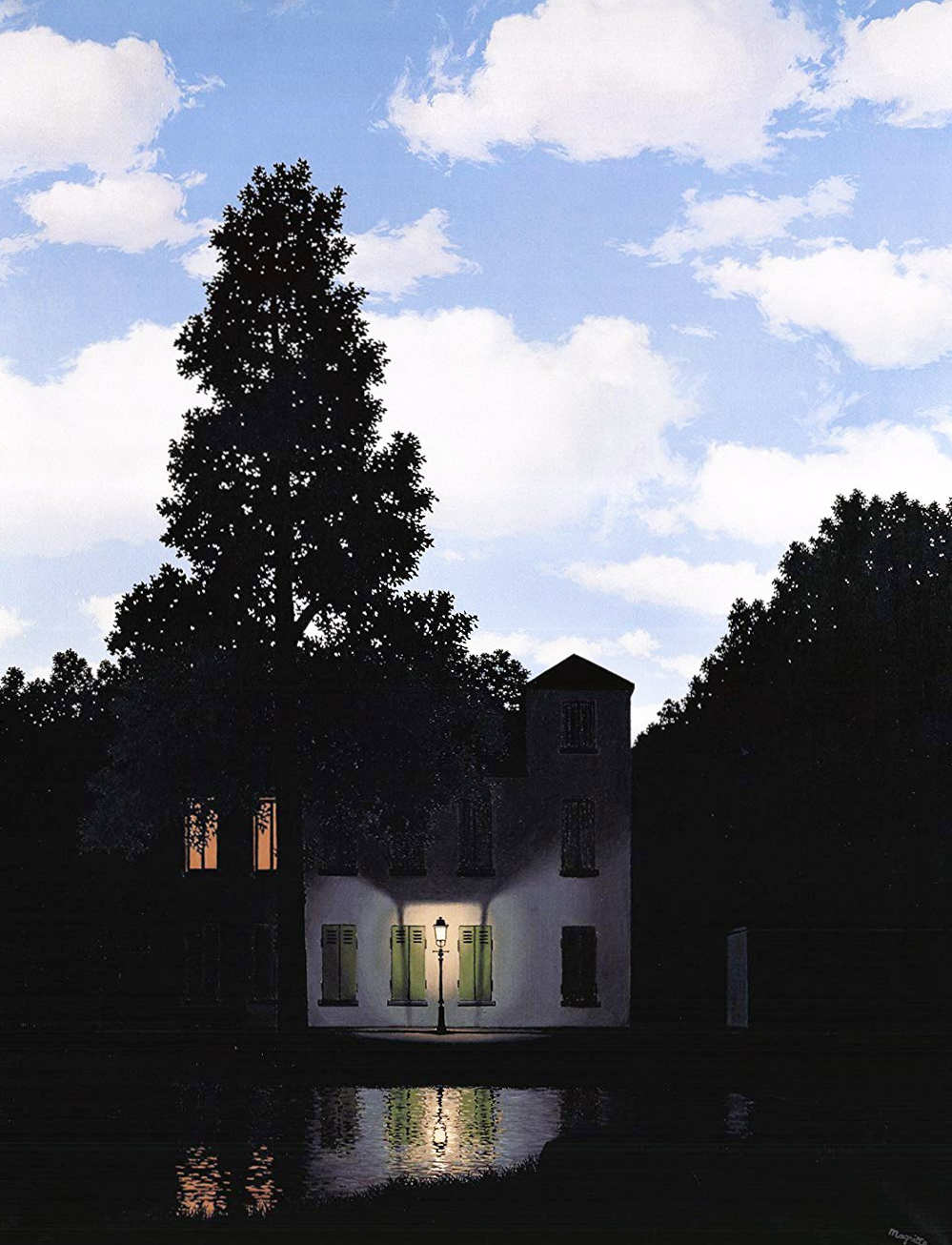 The emptiness, the stillness, the air of melancholy make one think of Hopper, or of the Magritte of the Empire of Light series.  But it is an astonishing fact that Magritte painted his mysterious canvasses some fifteen to twenty years after Newton’s Camberwell was first exhibited.  One really does wonder if those art historians who trace Magritte’s inspiration back to, say, Atkinson Grimshaw might have overlooked something.

Newton returned to these forgotten corners of south London a number of times over the years, and two of his finest “Canalettos” date to 1950, when he was already seventy.  But in the end he moved on, and from the mid 50s until his death in 1968 he concentrated on painting conventional landscapes.  As a subject of art, the Grand Surrey Canal had simply disappeared. 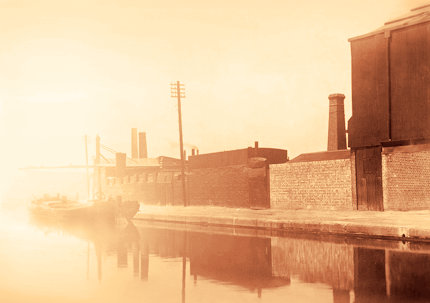 Photograph of a wharf on the Grand Surrey Canal from a series dated c.1915-1925.  The photographer is thought to have been an employee of the Port of London Authority.  © PLA collection/Museum of London

A STRONG BROWN GOD
And the real canal was soon to disappear as well.  The development of the road system that followed the end of the Second World War rendered it progressively purposeless, and by 1960 the Camberwell stretch had been filled in.  The demise of the dockland timber trade accelerated the process, and in the 1970s the Grand Surrey ceased to exist as such.  There are still vestiges—canal bridges and cottages, old mooring rings, the Surrey Canal Road in Bermondsey—but they are little more than the “ghostly presences” of Newton’s vision of a faded past. 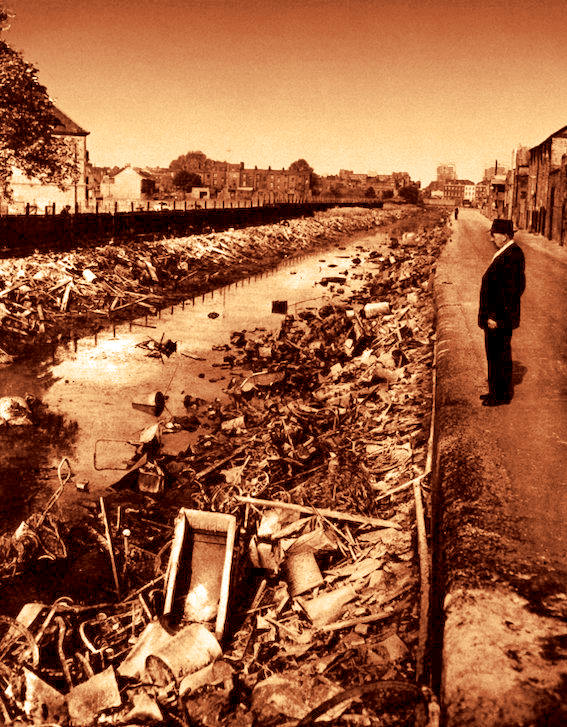 Draining a stretch of the Grand Surrey Canal in Camberwell.  Image in The Illustrated London News 4 June 1960.

Ironically, the final impression of the canal was left not by painting but by photography, for its slow death was recorded in numerous images that capture in stark monochrome the strange poetry of decline and dilapidation.  In one such photograph, which was published in The Illustrated London News in 1960, a man stands on the bank of the canal, staring forlornly at a mass of tangled metal.  The canal near Wells Way Bridge in Camberwell had been drained, prior to being filled in, and an astonishing assortment of rejectamenta was on show.  Ranging “through all ages of man”—here a pram, there a bedstead—the abandoned items could be seen as an “allegory of the moral basis of our modern civilisation”.  And, when all was filled in, a block of flats would be built “where once the laden barges of the last century floated on hot June afternoons”.

Which may sound a touch whimsical.  But water in all its forms flows through the human psyche.  “I think” Eliot wrote in The Dry Salvages, “that the river / Is a strong brown god”.  Would he have extended this to the Grand Surrey Canal?  Possibly, possibly.  After all, “brown” sounds just about right.