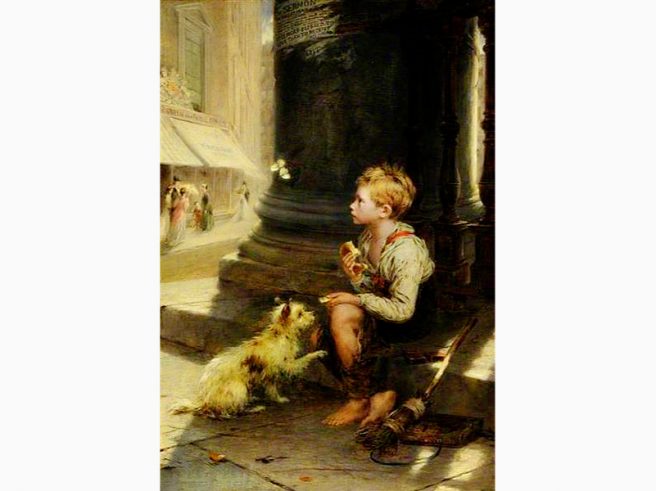 If you read last week’s article you will remember how the philanthropic Martin Ware took a poor young Londoner by the name of Edward Connor under his wing.  Edward was an Irish Catholic, and Ware, a teacher at the Brunswick Street Ragged School, and a man of stern Christian principles, exercised forbearance as well as compassion in his dealings with the boy.  But tragedy trod on the heels of tragedy, for Edward lost first his father to a workplace accident, and then his mother to consumption.

Edward had several siblings, of whom one in particular, William, is of interest to us, because he too was known to Ware.  William was younger than Edward by about three years, and at about the time when Edward was going into the industrial school, in May 1854, he was in the St Pancras workhouse.  With him was his sister, Margaret, who was four years younger.  Ware tells us that at this time Edward was almost fifteen, so we can assume that William was about eleven, and Margaret about seven.  Then in the first week of June William and Margaret came out of the workhouse.  We have good reason to assume that they did not return to their mother, who was probably already laid low by the consumption that would kill her in about two months’ time.  Ware suggests that someone was looking out for them—“A woman came to speak about Edward Connor’s brother William”—and a reasonable guess is that she was a relative or a family friend. 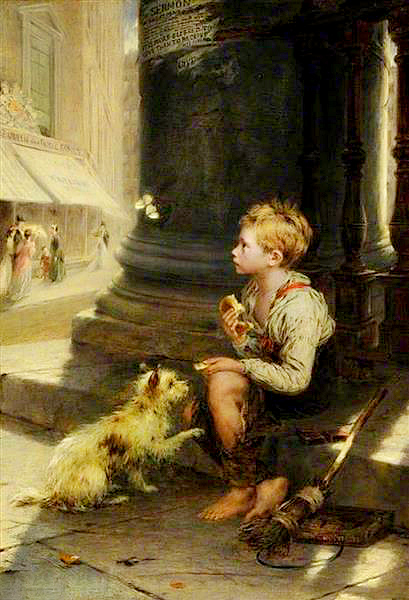 An impoverished boy shares a crust of bread with his faithful companion.  Oil painting by Augustus Edwin Mulready dated 1871.

HOW HE CAN
William was clearly a sad little creature.  Ware’s informant was worried that he was drifting aimlessly—“getting his living how he can”—deprived of the security that even a workhouse offered.  When Ware finally met him, in the middle of June, he was wandering about the streets.  William said that he had work of sorts, but that he was sleeping rough, in passages and in dust-holes.  What was it to sleep in a dust-hole?  The hole was a large open bin where the ashes from a fireplace fell, to be collected from outside, and carted away to the dust-yards.  William might have found some protection against the elements in a bed of coal ash and cinders as he burrowed down to pass the night alone, wretchedly poor, and abandoned to the darkness and solitude of the nighttime city streets.

Ware had seen all this before with William’s brother, who he knew had also resorted to sleeping in the streets.  And he did for William what he had done for Edward, by persuading the committee of the industrial school to give him a place, which afforded accommodation as well as training. 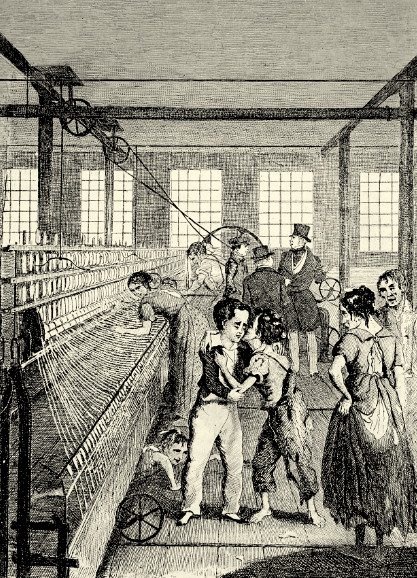 Children working in a textile factory.  Image in Frances Milton Trollope The Life and Adventures of Michael Armstrong, the Factory Boy (1844) between pages 82 and 83.

HE CANNOT SETTLE
For the next twelve months the boy moved from here to there and back again.  He stayed with a cousin in Fulham for a while, and there was the promise of work, which for some reason never materialised.  He returned to the industrial school a week before his mother died in the infirmary of the St Pancras workhouse, and a fortnight later he went to work in a cotton factory, although this too came to nothing.  The following year he was taken on as a newspaper boy by the nascent Daily Telegraph, but the pay was abysmal.  At which point Ware stepped in again by giving William a place in the Shoeblack Society, sending him into the streets in July 1855 to see if he might enjoy some success in this line of work.

But William simply could not settle.  First, he was ill, which led to long absences from his work as a shoeblack.  Then he found a position as page to a Major-General Charles Dixon of Clapham, which came to an end after little more than a year when he was held to have spoken inappropriately to Dixon’s grown up daughter Mary.  Ware heard second-hand that he was guilty of “answering” the young woman, which makes one wonder who in fact said what, and to whom.  Nine months later another job fell through, this time an opportunity to work for the publishers Brooks Day & Son, who had premises in Lincoln’s Inn Fields, and specialised in chromolithography.  William’s world was fast falling apart.  In April 1858 he started sleeping in the streets again, having been turned out by his older sister Mary: Ware gave him two and six to help him makes ends meet.  Then he made one final bid to make something of himself.  He decided to go to sea. 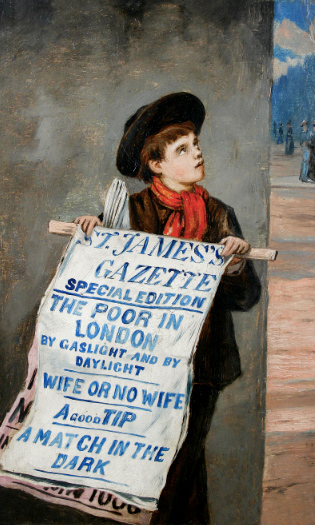 Portrait of a boy selling newspapers on a London street by Augustus Edwin Mulready.  Date of oil painting unknown.

GETTING ON WELL
For a boy like William Connor life on the ocean wave started with the Marine Society.  The purpose of the Society was to offer the sons of poor parents an apprenticeship, in the course of which they would be trained in the essential duties of a seaman.  The training was free of all expenses to parents or guardians.  In Stanford’s 1860 New London Guide the destitute boys placed in the Royal Navy, the Indian Navy or the merchant service in 1859 numbered between five and six hundred.

In the autumn of 1858, when he was about fifteen, William wrote to Ware from Woolwich, where his training ship, the Venus, lay moored off Charlton Pier.  His two letters are profoundly moving testaments to the respect and affection in which he held his former protector and mentor.  He reported that he was getting on well, that he liked the ship, and that he liked it more as every day passed.  He also asked Ware to send him some reading material: a book, perhaps, or an issue of the The Leisure Hour.  He also requested some stamps for the letters he was planning to write to his siblings. 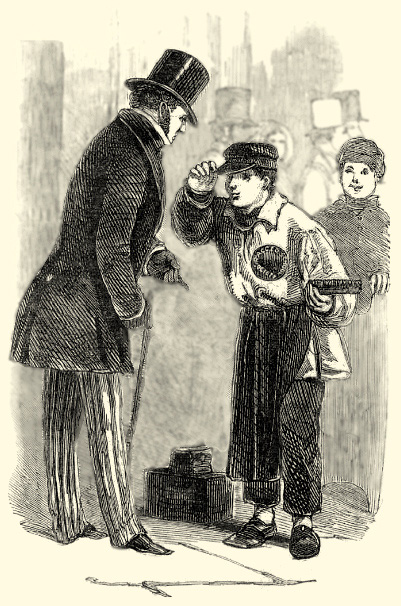 A member of the Shoeblack Brigade at work.  Image in The Illustrated London News 24 May 1851.

William appeared to have lost contact with Edward.  He did not know where his brother was at the time, and he was sure that his brother would not know where he was.  He also expressed disappointment at receiving no answer to either of the two letters he had written to Mary.  Nor had she visited him in Woolwich, which left him wondering if she might be ill.  He was anxious for news of her.

William was drafted into the Indian Navy, and on the 6th of November 1858 he sailed from Gravesend on board the Persia.  He did not write for another twelve months, by which time he had been transferred to the Ferooz.  His life had become turbulent and dangerous, for the Ferooz was involved in fighting between British troops and Indian rebels over the island of Bet Dwarka off the coast of Gujurat.  Writing to Ware in October 1859 he gave a vivid first-hand account of these events, including the number of men killed or wounded.  The following year he was in Hong Kong, where the Ferooz was caught up in the Second Opium War, and in particular in the actions of Lord Elgin.  Again he described to Ware the hostilities, the casualties, the dead piled in heaps along the shore or floating on the water.  Somehow, though, amidst all the destruction, it was the punishment of a marine that affected William most.  The marine had shot and wounded two officers—we never learn why—and he was hanged from the yardarm of a gunboat. 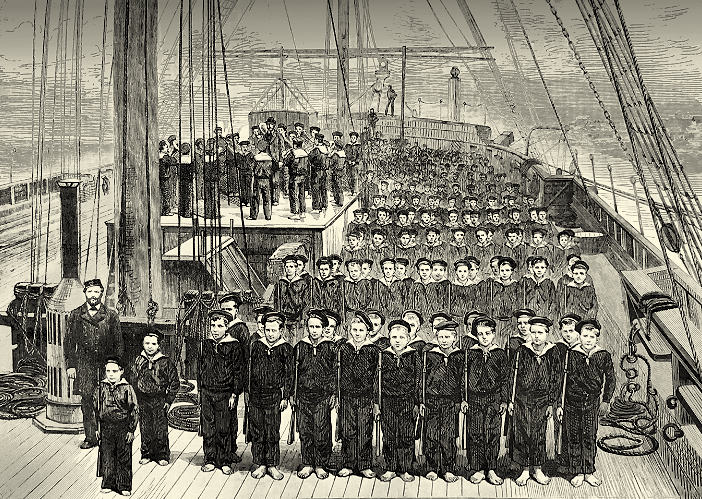 I WISH OH I WISH
All of this was recorded in four letters to Ware written between October 1859 and January 1861.  Two more—but only two more—were to follow.  He wondered if books and newspapers might be sent out to him so that he could keep in touch with the England he missed so very much.  “I should like to see England again,” he wrote at one point.  He thought of the boys he had known in the Brunswick Street school, and the “gentlemen” who taught there, and he thought of Mary, who was living he knew not where.  These last two letters were written in 1862, when William would have been about nineteen.  He was in the Gulf of Oman and then in the Persian Gulf.  He had travelled far—far from the streets and the alleys and the passages of the capital.  But for all his yearning he would never return home.  For on the 15th of September 1862, while on board another ship, the Semiramis, he died. 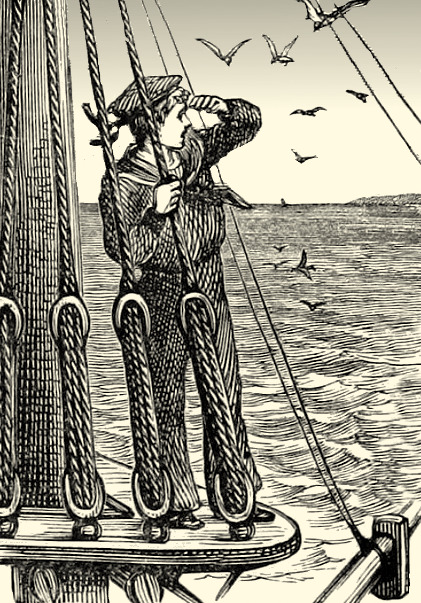 Sailor boy on the lookout.  Image in Mark James Barrington-Ward The Round World (1890).

He had been ill for five days with “brain fever”, which might have been meningitis, or encephalitis, or scarlet fever.  When the news reached him, Ware was saddened.  “Peace be with him!” was the last mention he made of the boy in his journal, adding “R.I.P.” in the margin.  He had reason to believe that the boy had not forgotten him, even as his life was flickering out, and he noted that

his last sensible words were “Oh I wish I could see Mr Ware”.

How Ware knew this—he was in London and William was in the Gulf of Aden—is an interesting question.  And the answer to the question is interesting too … TO BE CONCLUDED.

Shoes and Ships, or, The Story of Marcus Worley