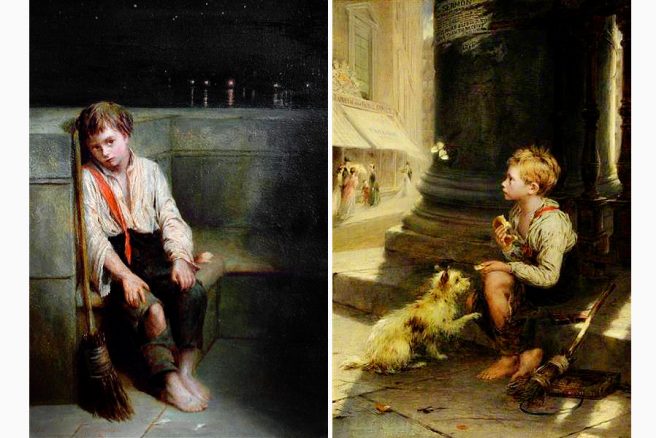 If you have been following the story of Edward and William Connor, the poor Irish brothers who were taken under the wing of the philanthropic Martin Ware, a teacher at the Brunswick Street Ragged School, and co-founder of the Shoeblack Society, you will remember the part played in the drama by a cruel fate.  Both brothers had gone to sea, and it was on board a ship in the Gulf of Aden that the younger of the two, William, died at the age of nineteen.  Ware believed that William’s last thoughts had been of him.  If only we could be sure that this was the case, for it would indeed be a moving testimonial for the man who had done so much to turn his life around.

According to the entry Ware made in his journal for the 1st of November 1862, Edward had been on board the same ship, the Semiramis, and it was he who sent their benefactor the distressing news.  But he had been at his side when his brother uttered his last “sensible” words—the last words Edward could make sense of—before he died.  They were simple enough—“Oh I wish I could see Mr Ware”—but they would have given great comfort to the man whose kindness and compassion they celebrated. 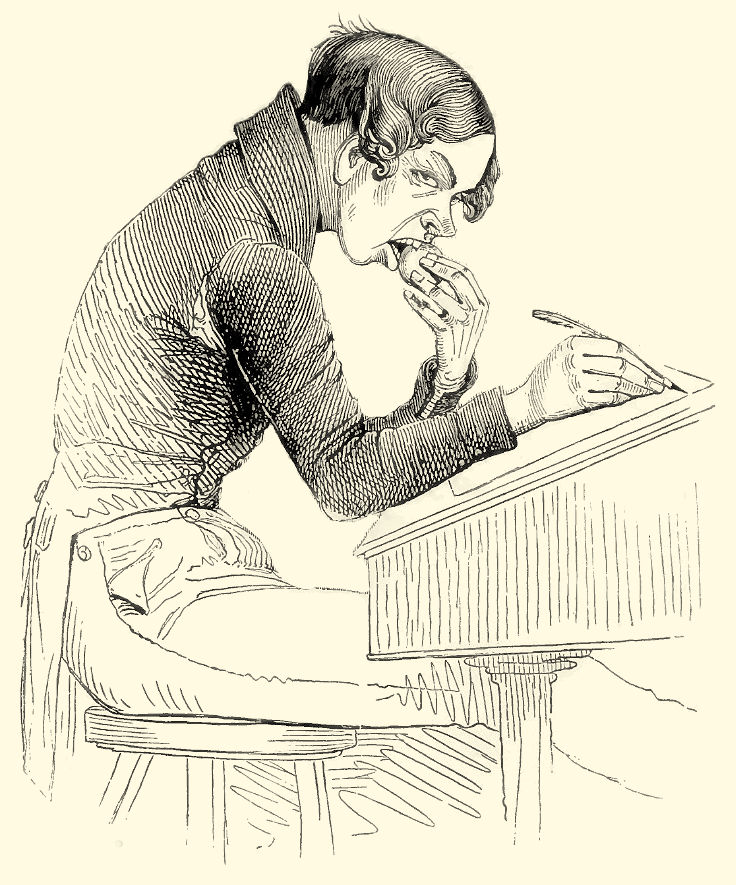 A not very flattering picture of a nineteenth-century lawyer’s clerk.  Image by Kenny Meadows in Heads of the People; or, Portraits of the English (1840) between pages 24 and 25.

THE CALL OF THE SEA
Following the death of his mother Ellen in the late summer of 1854, when he was fifteen or sixteen years old, Edward went from one place of employment to another.  We know from entries in Ware’s journal that he had at one point been a servant of a Mr Bale, who moved away, and that over a period of six months he worked for the Electric Telegraph Company, and then for a doctor, and then for a Mr Piper.  His relationship with Piper is a mystery—possibly apprentice, possibly servant—and Ware was evidently concerned that it might be exploitative.  He wrote that Edward

does not seem very comfortable with Mr Piper.  He made him do some work this morning (Sunday) which the boy did not like.  I told him he ought to refuse to do it & take the consequences.  I rather dissuaded him from being bound unless he quite liked his master.

A few days later Ware noted that Edward had been dismissed.  He could not satisfy himself as to the reason, but he realised that the boy was in need of help once more. 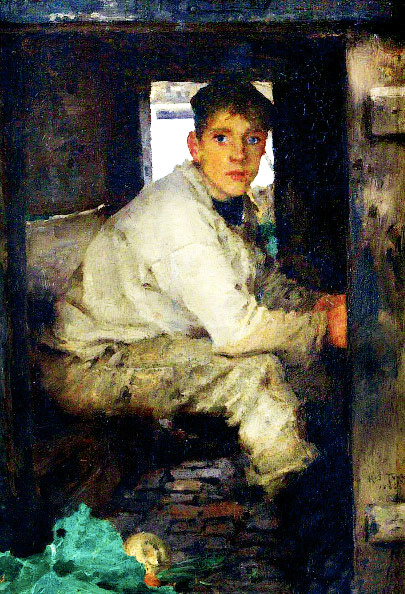 Help came in the form of a clerical position with John Savill Vaizey, a solicitor with a practice at 2 South Square in Gray’s Inn.  (The address has an interesting little history, for it was next door at 1 South Square that the firm of Ellis and Blackmore, for whom a fifteen-year-old Charles Dickens started work as a clerk in the early summer of 1827, had their offices.)  Presumably Ware, a barrister by profession, had pulled a few strings, but the arrangement did not last, and four months later, in June 1855, Edward “obtained a situation” with a Mr Edward Innes Robinson at his home at 55 Victoria Road in Pimlico.  The situation entailed travelling abroad, but Ware did not have any details beyond the fact that Robinson was a retired major in the 7th Light Cavalry, a regiment of the Bengal Army.  “It seems a mysterious engagement,” he wrote, rather unhappily.  What on earth did he mean?  Robinson struck Ware as a reputable man—his military background probably impressed—but we can only guess at the nature of his business.

Sadly, the next we hear of Edward is that he had been dismissed again.  This was in March 1856, and, although we cannot guarantee that Ware recorded all his comings and goings, we may assume that it was his employment with the retired army officer that was being terminated.  The boy’s master had “found him occasionally saucy”—a bit lippy, as we would say now—but still agreed to give him a good character reference.  Possibly his time with Major Robinson had suggested a way forward, for he made it known to Ware that he wanted to go to sea, and when we next hear of him, in a journal entry for May 1857, he was serving in the Indian Navy at what is now Mumbai but was then Bombay. 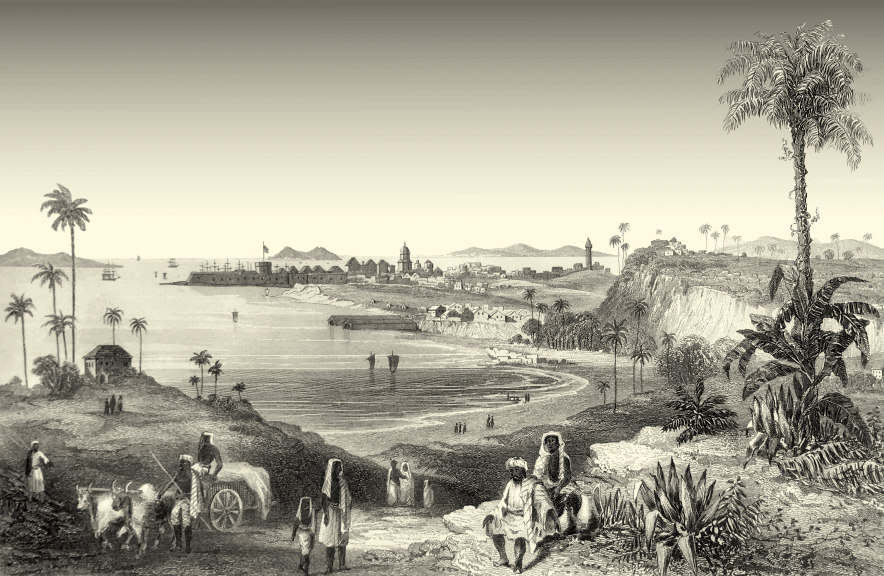 View of nineteenth-century Bombay, or Mumbai, as it is known now.  Image in Robert Montgomery Martin The Indian Empire volume 1 (1858-61) between pages 216 and 217.

UP INTO THE AIR
By now Edward would have been seventeen or eighteen.  Two letters to Ware have survived.  The first is dated the 22nd of March 1858, when Edward was serving on board the Tigris, an Indian Navy ten-gun brig, which had sailed into Bombay Harbour for repairs following a dramatic incident.  The brig had been run into by another vessel, the Carpentaria, when she was lying off Kharrack (now Kharg) Island in the Persian Gulf.  The foremast and bowsprit were damaged, the anchor lost one of its flukes, and the Tigris drifted for about fifteen miles in the direction of Bushire (now Bushehr).  There were no casualties, and eventually the ship made it to the west coast of India.

Edward thanked Ware for sending out reading material, which was hard to come by when his ship was operating in the Gulf, and asked for more.  His main complaint was the discomfort caused by prickly heat—“it comes out in large spots all over your body so that you can scarcely move yourself”—but he was less concerned with his physical condition than with the whereabouts of his siblings.  He had heard that his brother William was well, and he hoped to find out where in London he was working.  He wondered if William might be able to find out for him where their sisters Mary and Margaret were.  If so he would write to them.  What tender feelings for those he loved and missed! 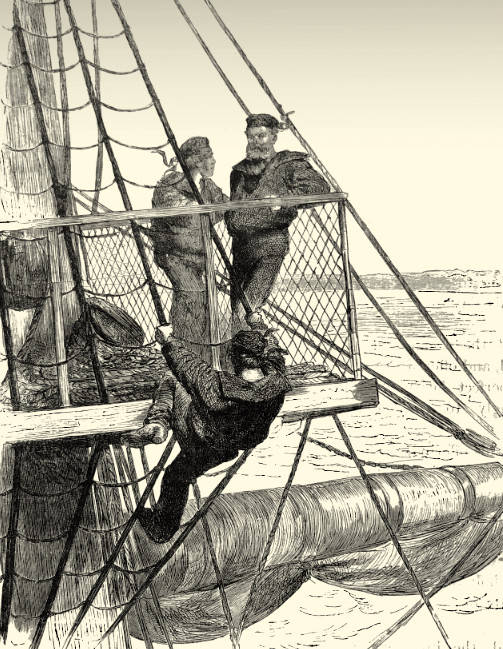 Sailors on duty high above the deck of a ship.  Image in the May 1879 issue of The Cottager and Artisan.

As we know, William died at sea four years later.  He had also enlisted in the Indian Navy.  How it came about that the brothers were together on board the Semiramis is not clear: the letters do not tell us.  But in his second and last surviving letter, written from Aden, Edward set down the painful details for Ware, starting with the onset of William’s illness on the 10th of September.  Three days later Edward came on board, and two days after that, on the 15th of September, William died.  Edward believed that his brother might have survived if had received appropriate medical attention.  But in all the time he was on board

the doctor never saw him once neither had he a drop of medicine until yesterday morning when the doctor said that there was not anything the matter with him and about an hour afterwards when I took him up into the air he told me my brother would not live anymore than the day out.

And the doctor was right, for at three in the afternoon William died, cradled in his brother’s arms, and calling for Ware.

FOR GALLANTRY
But Edward’s letter to Ware has more in it than his account of William’s death.  He believed that he was in line to receive a medal for an extraordinary act of selflessness.  And he wondered if Ware was able to confirm this. 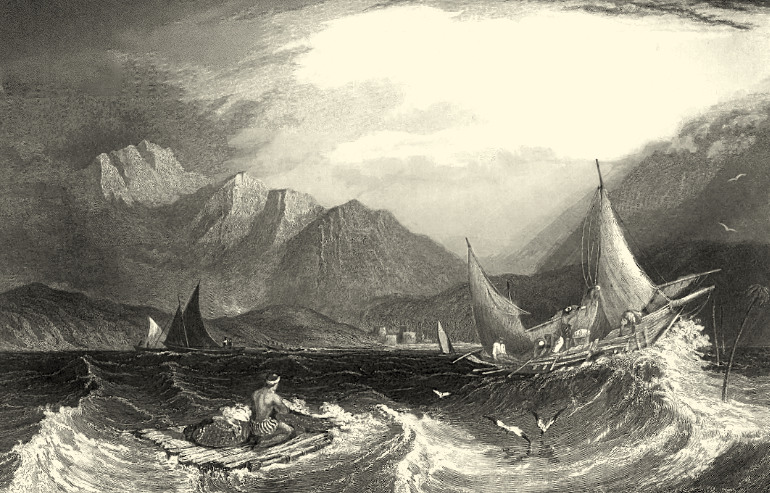 Bombay (Mumbai) Harbour in the monsoon.  Image in Robert Montgomery Martin The Indian Empire volume 3 (1858-61) between pages 73 and 74.

On the 6th of July Edward had been serving on board the Falkland, a sloop-of-war operating in the Persian Gulf, when one of the crew, a young boy, fell overboard.  Edward, with no thought for his own safety, jumped in after the boy.  He was putting himself in considerable danger, for the sea was running high, and sharks were patrolling.  But a midshipman by the name of Price, who had seen what had happened, came to his assistance.  All three were pulled safely back on board.

The courage shown by the two rescuers was reported to the Royal Humane Society.  The stated aim of the Society was the preservation of life, most notably by providing equipment and trained personnel in locations where there was a significant risk of death by drowning.  But a secondary role was the recognition of any individual who had taken exceptional steps to rescue another from danger.  Medals were awarded annually, and details of the more conspicuous interventions were published as “cases” in the Society’s annual report.  All rescue attempts, whether from a raging sea at one end of the scale, or from a tranquil backstreets canal at the other, were worthy of consideration.  And although case no. 17004, for which Edward Connor and Midshipman Price were awarded bronze medals, was not published in the annual report, others of a similar nature were, and from these we may form an impression of the wording of the citation that the saviours of the boy would have received.  As it happens, the very next case was published, and the similarities are striking:

The medal presented by the Royal Humane Society.

On the 8th of August, 1862, HMS Aboukir was nearing the entrance of Port Royal Harbour, Jamaica, under steam and sail, going about seven or eight knots, when John Welsh, ordinary seaman, fell overboard from the flying jib-boom, while stowing the flying jib which had just been taken in, and would in all probability have been drowned, but for the gallant act of Richard Malone, A.B., who, on hearing the cry of “man overboard”, ran aft, and jumped through one of the ports to his relief, and was greatly instrumental in saving the man’s life by supporting him until picked up by the cutter, which was lowered as soon as possible; but which, from the velocity with which the ship was going, necessarily took some time.  In addition to the ordinary risk of jumping overboard at sea, the voracity of the sharks in the waters near Port Royal is notorious.

We are probably not far off the mark in taking the gallantry of Able Seaman Malone in the West Indies as a re-run of the heroic acts of Connor and Price in the shark-infested waters of the Gulf. 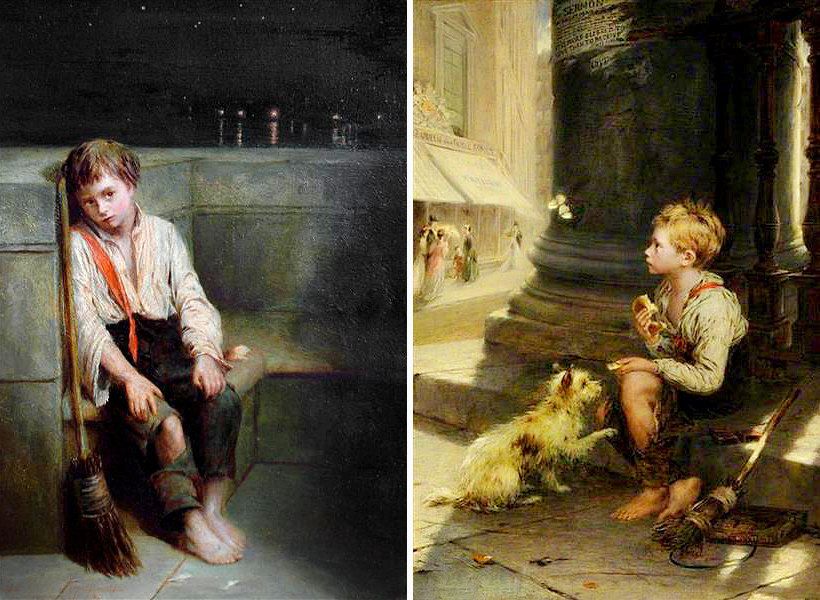 COMING FULL CIRCLE
But after 1862 we hear little more of Edward.  Two brief mentions appear in Ware’s journal—then silence.  In August 1863 Ware noted that a letter that he had sent to his former pupil in Bombay, in the belief that he was there in the European General Hospital, had been returned unclaimed.  Two months later he discovered that Edward had left the Navy, and was living at an address in Liverpool.

Thereafter we lose sight of him.  He was only in his mid-twenties, and it is interesting to speculate what the future held in store.  In a sense he had come full circle, ending his journey in the same obscurity from which he had started, many years ago, when the good Martin Ware took an interest in his physical and spiritual welfare.  But what a journey!  Poor London boy, rough sleeper, seaman, hero and medallist.

On Thin Ice, or, The Pleasures and Perils of Winter in the Parks