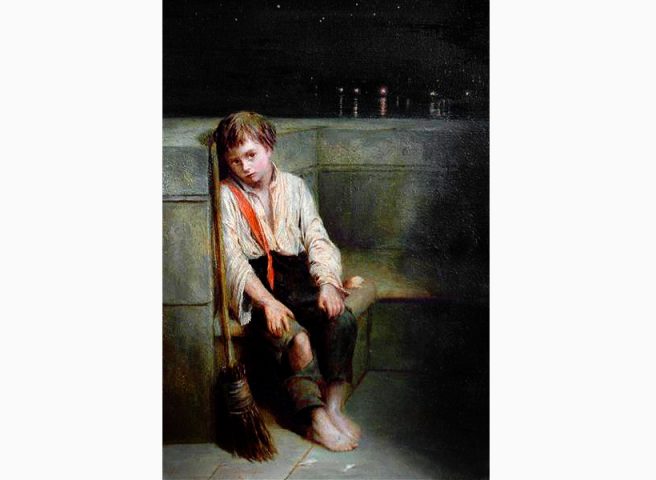 If you have read my occasional pieces on the boys of the Shoeblack Society, of which the most recent can be found here, then the name of Martin Ware will be familiar to you.  Ware, a barrister by profession, devoted himself to the welfare of those who were growing up on the very margins of society.  Fired by his strong Christian principles he strove to improve the lot of the poorest of the poor, and he saw it as his prerogative to reform juvenile characters along the way.

His involvement with the Shoeblack Society went hand in hand with his work for the Brunswick Street Ragged School, details of which fill the pages of his journals.  These written testaments are witness to the values and objectives, to the successes, and indeed to the failures, of an extraordinary man.  He looked out for and looked over young Londoners whom London had largely overlooked. 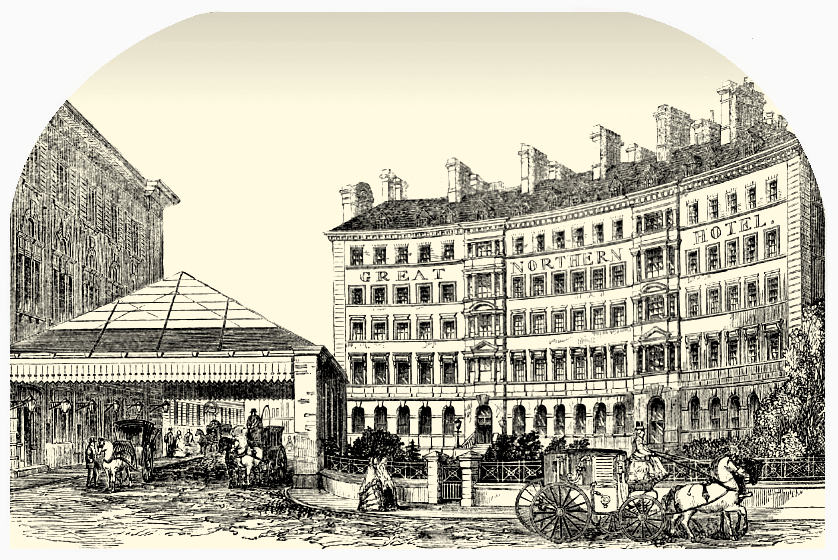 The Great Northern Hotel, designed to follow the curve of Old St Pancras Road, where it stood.  Image in George Measom The Official Illustrated Guide to the Great Northern Railway (1857) frontispiece.

STARTING OUT
One such beneficiary of Ware’s charitable concern was an Irish boy, Edward Connor, who was not quite fifteen years old when he was mentioned for the first time in the journals.  That was in May 1854.  He had been known to Ware for about two years.  Now he was in need of help, and he was hoping to be taken into the industrial school, which would have provided board and lodging as well as training in the skills required for employment.

Previously Edward had been a pupil of the St Mary’s Roman Catholic Schools in Lincoln’s Inn Fields.  The Catholic Schools, which operated under the aegis of the Associated Catholic Charities, had been in existence since the early years of the nineteenth century, and their stated purpose was to provide free education for poor children.  (For more on this subject see the story of William Weale.)  They had been set up in four London districts, and by the middle of the century they had a total population of some fourteen hundred pupils.

The Royal Free Hospital as it was in the middle years of the nineteenth century.  Image in The Pictorial Times 29 July 1843.

St Mary’s was in fact a consortium of schools—two each for boys and girls and one for infants—and the site was at the north west corner of Lincoln’s Inn Fields at 14 Gate Street.  Edward must have made a favourable impression, for the Master of the school recommended him to a young lawyer, James Henry Pattison, who took him on as a clerk.  For reasons unknown he left Pattison to work for a law stationer.  Then he relinquished this employment as well in order to work with his father, another Edward, who earned his living by the sweat of his brow far from the world of books and documents.

ROUGHING IT
Edward Connor senior had been born in Cork in Ireland.  He was one of the vast army of Irish labourers in London, and when his son joined him he was working as a builder.  Ware noted that young Edward was helping his father as a plasterer, and it would appear that he was not entirely happy with the arrangement, for he eventually found employment with a second firm of law stationers.  But this did not last either, and he went back to work with his father.  The wording in Ware’s journal—Edward was “taken away” from his job with the law stationers—suggests a degree of coercion.  We do not really know how the two Edwards got on, but their relationship, whatever form it took, was cut short when in 1853 the father was involved in an accident.  He had been working at the Great Northern Hotel in King’s Cross when he fell from scaffolding.  He ruptured his spleen and left kidney, and was taken to the Royal Free Hospital in Gray’s Inn Road, where he died of his injuries. 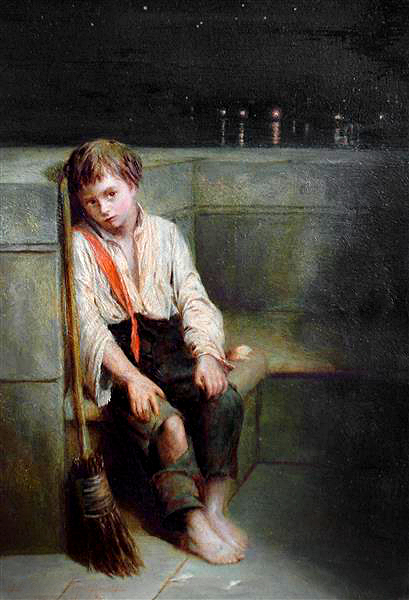 At this point Edward’s mother went into the St Pancras workhouse.  Edward was now living from hand to mouth, running errands to make ends meet, when there were errands to run.  He took to sleeping in the streets.  Ware was concerned—the boy was “quite destitute”—and saw to it that he was accepted into the industrial school.  There at least he was able to sleep in a dormitory, which afforded him security and a degree of comfort.  He must have struck Ware as a soul worth saving, insisting as he did that he had never been in prison or in any sort of custody.

TERRIBLY ALONE
Religion was never far away from Ware’s philanthropic activities, and it is clear from entries he made in his journals that he raised the subject with Edward about a month after he was admitted into the industrial school.  At the time Edward was still drifting from one job to another.  He had recently been working as a messenger boy in Brunswick Square, just to the west of the Foundling Hospital, but he was moving on to a new job in Holborn.  The day before, at the Sunday School overseen by Ware, he talked about his religion, and expressed unhappiness at the problems it was causing him. 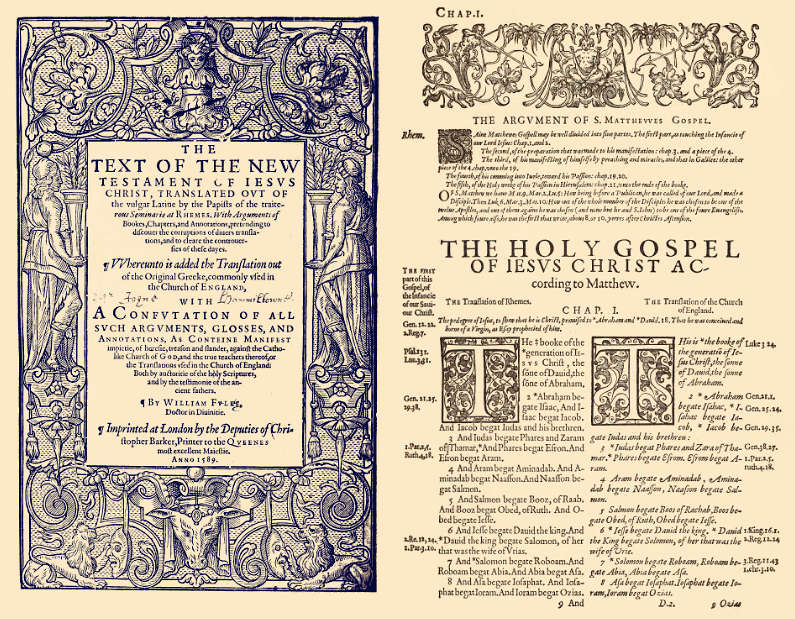 Title page of the Rheims New Testament alongside the first page of the Gospel According to Matthew from William Fulke‘s 1589 edition of the Bishop’s Bible.

To be precise, he was being bullied on account of his Catholicism.  The aggressors appear to have been other boys at the ragged school, who taunted Edward, and possibly attacked him, for “being a Papist”.  They tried to undermine his faith by telling him what he took to be lies about his religion.  Catholic priests, they claimed, could not absolve sinners of their sins.  Without parents to care for him, marginalised, wretchedly poor, and now rejected by those he would have considered his natural fellows, Edward must have felt terribly alone.  One can see how a man like Martin Ware—a decent and compassionate man—must have seemed to him at times to be the only friend he had in the world.

Edward, secure with the sympathetic Ware, asked if he had a Roman Catholic bible.  He wanted to explain that it was necessary to pray to the Virgin Mary.  As it happened, Ware had a copy of the Douay-Rheims Bible, which he said he might borrow.  He jotted down a comment in his journal—”I feel doubtful whether I was doing right”—but his hesitation was doctrinal.  On the matter of the boy’s physical well-being there was no such hesitation, and Ware was concerned that he should be properly kitted out for the next day’s employment.  “I gave him an old pair of shoes,” he wrote, “to go to his place tomorrow.” 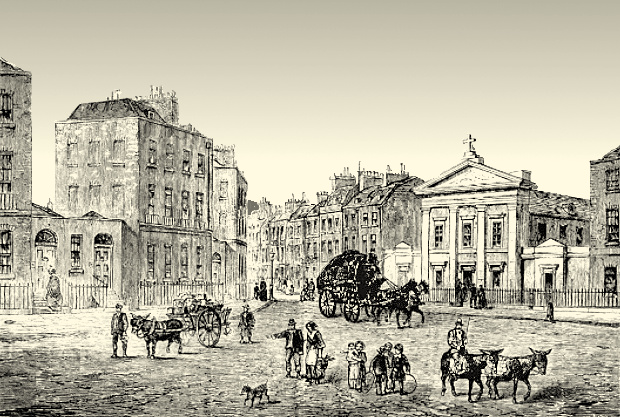 Clarendon Square in Somers Town with the Roman Catholic chapel of St Aloysius to the right.  Image in Edward Walford Old and New London volume 5 (1878 ) page 343.

THE GOOD BOOK
About six weeks later Ware actually gave Edward a bible.  He observed with satisfaction that the boy was turning out well, by which he probably meant that he was responding to the teaching at the Sunday School.  His interest in his pupil’s spiritual progress, which may strike us as oppressive, expressed itself as a marked displeasure that Edward had taken another boy to the Roman Catholic chapel of St Aloysius in Clarendon Square in Somers Town.  But the gift of the bible probably had less to do with the boy’s lapses than with the sad plight of his mother.

Ellen Connor, now a widow following the death of her husband at the Great Northern Hotel, was in her mid forties.  Her occupation was menial—a charwoman—and now she was ill with consumption.  Towards the end of July, on a Sunday, young Edward visited her in the infirmary of the St Pancras workhouse.  Ware went with him, and no doubt he was able to give the boy emotional support.  He was shocked at what he found—Ellen seemed to him to be “very ignorant & unenlightened”—and it is clear that he regarded the boy as being abandoned in more than one sense of the word.  But he noted that Ellen was dying—the doctors did not hold out much hope—and his first thought was for a young boy who was days away from becoming an orphan.  The bible may or may not have been what Edward needed at that time, but Ware’s presence, and his concern for him, however motivated, must have brought some comfort.

A scene outside the casual ward of a workhouse.  Oil painting by Luke Fildes.  © Tate  CC-BY-NC-ND 3.0 (Unported)

Two weeks later Ellen Connor died, as expected.  She was in the workhouse still, and alone.  Edward had a younger brother, William, but neither was at their mother’s side as she passed from life.  Why this was so we can only guess.  But for Edward, and, as we shall see, for his brother William, the story did not end there.  Fate most certainly had more in store … TO BE CONTINUED.