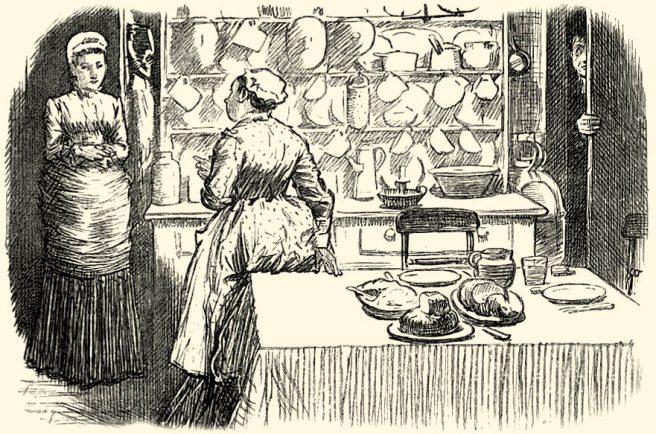 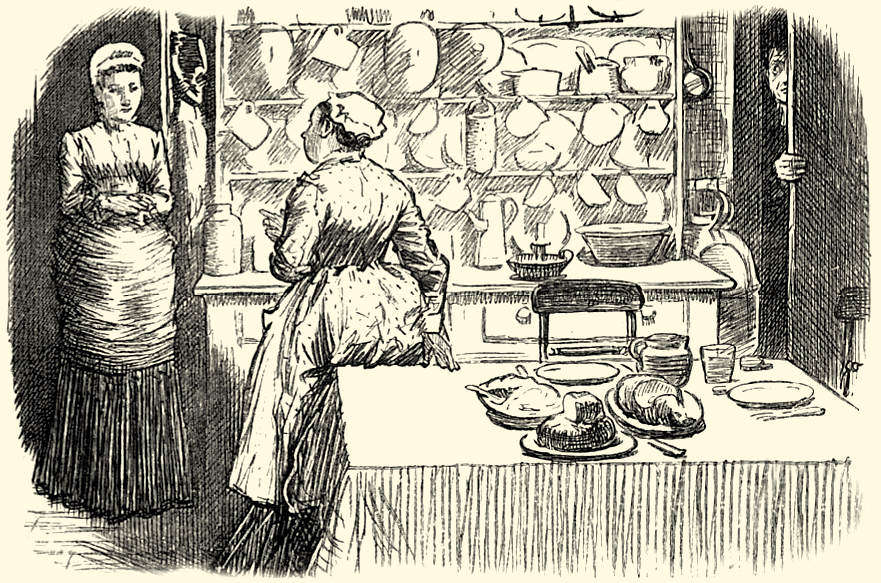 The mistress of the household interviews her cook.  Image in Punch 27 September 1884.

On Monday the 27th of May 1872 James Fisher began the nightly ritual of checking that his house at 90 Sandringham Road in Hackney Downs was securely locked.  At quarter past eleven he entered the breakfast parlour, where only a few hours before the family had eaten supper, and heard what appeared to be a low snore.  He tutted in irritation: one of the family’s dogs must have sneaked into the room and settled in for a sleep.  He decided that in the morning he would have words with Mary Ann, the maid, who had been remiss in her duties.  The animal should have been put outside in the garden hours ago: now he would have to do it himself before going to bed.  Working out that the sound appeared to be coming from under the sofa, James bent down to remove the mutt.

WORK WORK WORK
James Fisher, aged fifty-one, was a retired solicitor who lived with Sarah, his wife of seven years, and the three children from her first marriage.  Like most middle-class families the Fishers employed a live-in maid, in this case a young woman called Mary Ann Brooks, who came from Brinkley near Newmarket in Cambridgeshire.  Mary Ann, the daughter of a carpenter and wheelwright, had attended school until she was eleven, after which she entered employment as a maid-of-all-work. 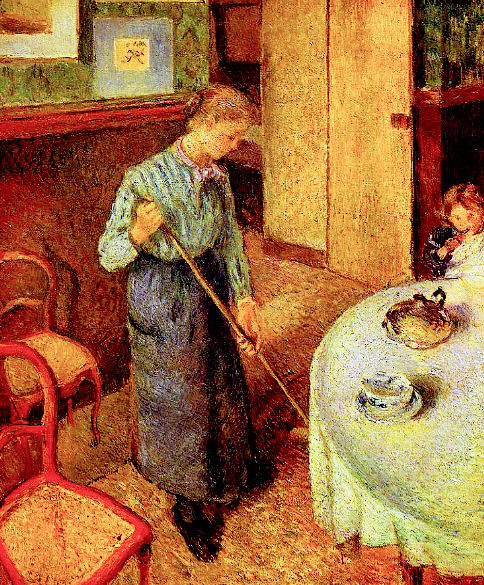 According to Mrs Beeton in her 1861 Book of Household Management, the general servant

is perhaps the only one of her class deserving of commiseration: her life is a solitary one, and in some places, her work is never done.  She is also subject to rougher treatment than either the house or kitchen-maid, especially in her earlier career: she starts in life, probably a girl of thirteen, with some small tradesman’s wife as her mistress, just a step above her in the social scale; and although the class contains among them many excellent, kind-hearted women, it also contains some very rough specimens of the feminine gender, and to some of these it occasionally falls to give our maid-of-all-work her first lessons in her multifarious occupations: the mistress’s commands are the measure of the maid-of-all-work’s duties.  By the time she has become a tolerable servant, she is probably engaged in some respectable tradesman’s house, where she has to rise with the lark, for she has to do in her own person all the work which in larger establishments is performed by cook, kitchen-maid, and housemaid, and occasionally the part of a footman’s duty, which consists in carrying messages. 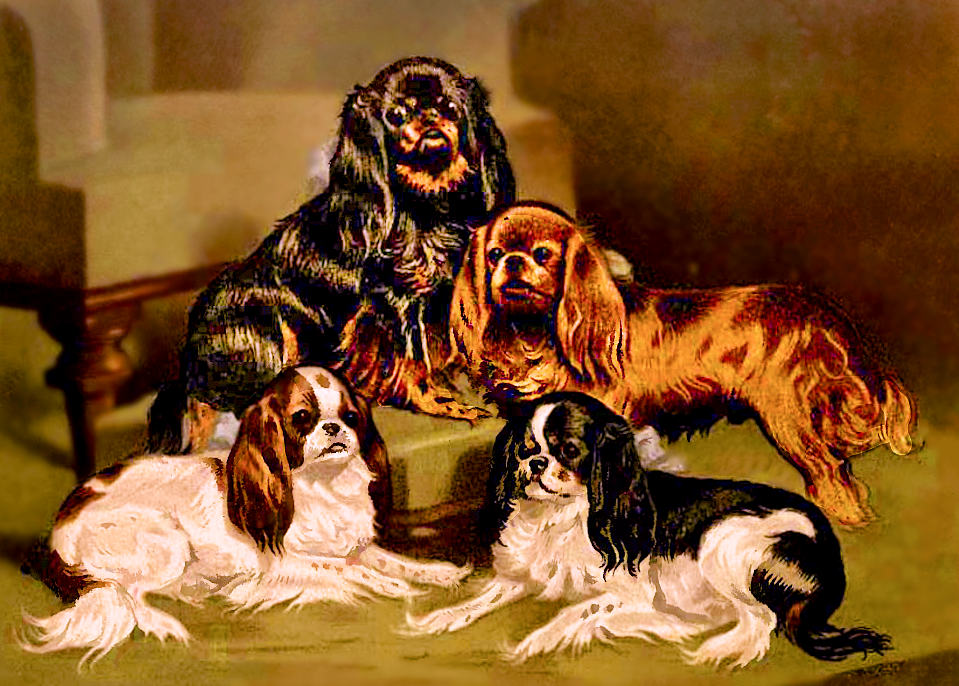 Portrait of toy spaniels.  Image in Vero Kemball Shaw The Illustrated Book of the Dog (1881) between pages 168 and 169.

But let us return to James Fisher.  Stooping to extract the snoozing dog he was shocked to see not a familiar furry face but a pair of gentleman’s boots, and next to the boots the recumbent figure of the man he took to be their owner.  The man was not only sleeping but snoring as well.  Fisher was alarmed.  Could this be a burglar, he wondered, with designs on his extensive collection of silver plate?  And how long had the man been under the sofa?  The family had not heard a peep when they had eaten supper there only a few hours ago.  (Supper may well have been one of Mrs Beeton’s plain family menus: fried whitings with anchovy sauce, cold mutton, mashed potatoes and stewed veal, a fig pudding.)  Thinking quickly Fisher crept from the room and ran outside, where, as it happened, a police constable was standing.  Following Fisher back into the house the constable roused the “burglar” from his slumbers, and took him into custody. 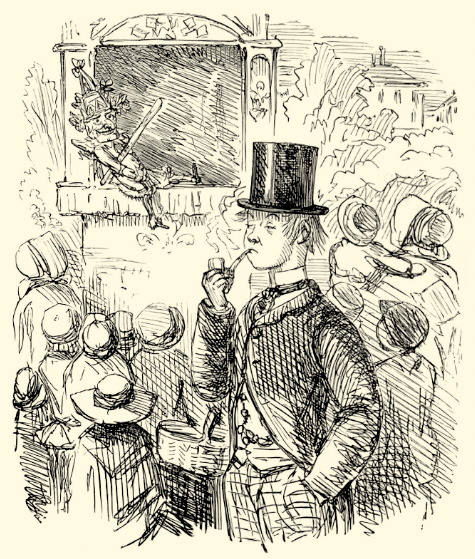 STRAIGHT TO THE ALTAR
The following day the “burglar” appeared before James Lennox Hannay, the magistrate at the Worship Street Police Court, charged with being concealed in a dwelling house for an unlawful purpose.  He was found to be a young man of eighteen by the name of Louis Steib, a cigar maker, who lodged in Tottenham Street only a short walk down Kingsland High Street.  The bashful Steib explained that the purpose for which he had been at 90 Sandringham Road was neither nefarious nor unlawful.  Far from planning to steal the Fisher family silver, he had hoped to steal the heart of their maid, the twenty-two-year-old Mary Ann, who he had been courting for some time. 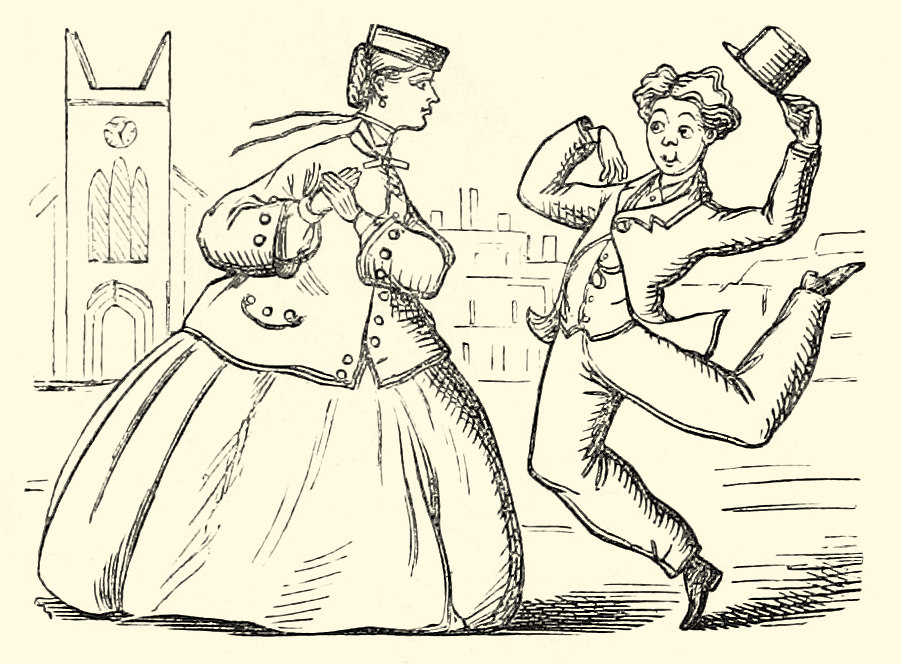 Maid servants had little free time—perhaps a half day off once a week and an evening if they were lucky—so Mary Ann and Louis Steib had few opportunities to meet.  Therefore she had let him into the house to wait until the family had gone to bed, when they could be alone together.  Unfortunately, while Steib was secreted under the sofa, a hard day’s work at the cigar factory had taken its toll, sending him off to the Land of Nod.  “I am willing to marry her directly,” he told the magistrate in all sincerity, “and I went there for that purpose.”  Mr Hannay raised an eyebrow at Steib’s curious phrasing, but believed his story, and released him into Mary Ann’s loving arms. 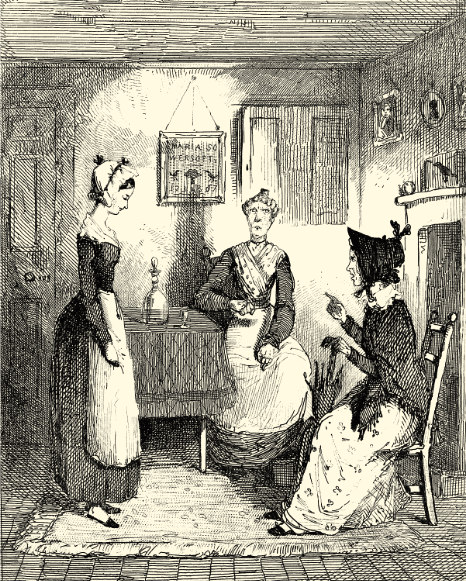 A maid being spoken to rather sharply.  Image by John Leech in Charles Hooton Colin Clink volume 2 (1841) frontispiece.

DUBIOUS CONNECTIONS
What the Fishers made of this we do not know.  But it is likely that Mary Ann was promptly dismissed without a character or a reference, for a maid with a follower, that is to say a boyfriend, was rarely regarded in a positive light by the Victorian employer.  The expansion of the middle-classes meant that satisfactory servants were increasingly in short supply.  So if a household had gone to the trouble of finding and training a maid, it was jolly inconvenient if she left to marry.

Of course there were greater catastrophes than having a maid hand in her notice.  For example, she might have her mind more on her admirer than on her job.  Or she might be tempted to let some unknown scallywag into the house, a scenario envisaged by Henry Mayhew in London Labour and the London Poor:

Some respectable looking young women, in the service of middle-class and fashionable families, are connected with burglars … Some of these females are usually not a fortnight or a month in service before a heavy burglary is committed in the house. 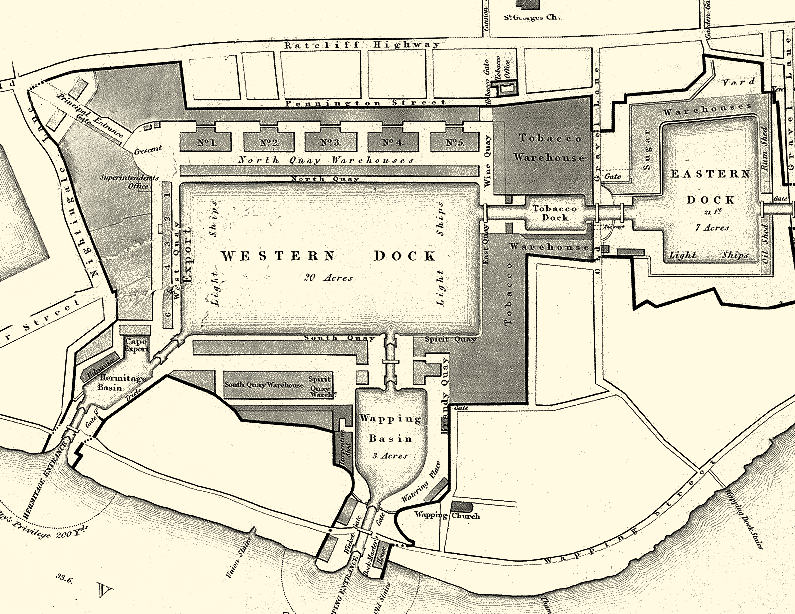 And, horror of horrors, the maid with a follower might become pregnant.  Having a maid in the family way would bring shame on the household.  There would be muttered comments to the effect that a woman whose servants were able to indulge in immoral behaviour could not be doing her job properly.  There was even a chance that a pregnant maid who had not been dismissed in time might actually give birth in her employer’s home.  Jane Welsh Carlyle, writing to Mary Russell in November 1864, confided that during her absence her cook, another Mary, had given birth to a child.  While Mary

was in labour in the small room at the end of the dining room (the china closet), Mr Carlyle was taking tea in the diningroom with Miss Jewsbury talking to him!!!  Just a thin small door between!  the child was not born till two in the morning when Mr C was still reading in the Drawing room.

Some servants arranged to send their child off to be nursed, but not all pregnancies got this far, and there are many sad tales of lonely stillbirths and desperate acts of infanticide.  One such case is described in our article on poor Sarah Gough, who certainly fared worse than Mary Ann. 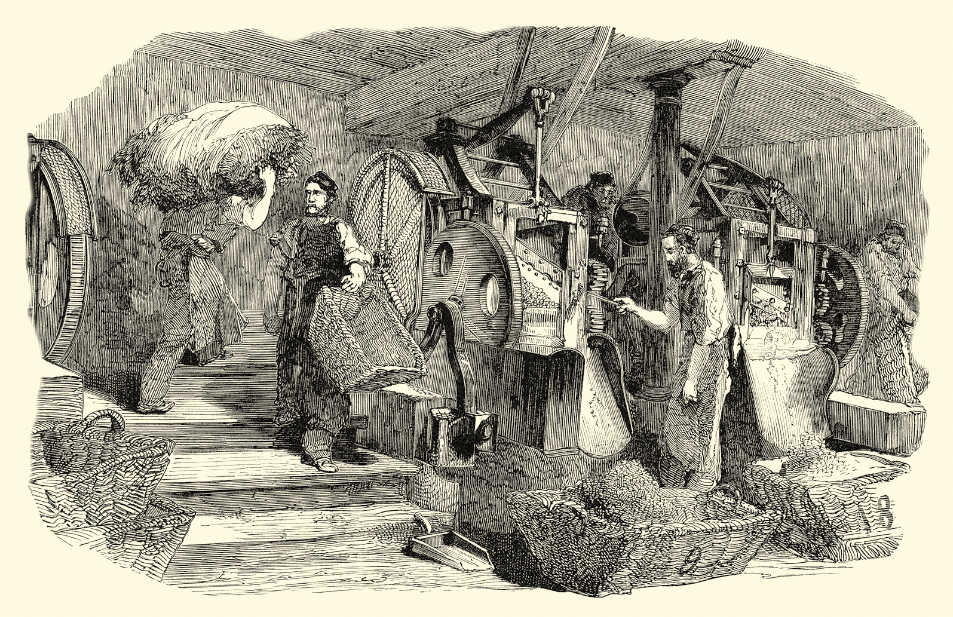 STEADY IN THE END
Louis Steib, the son of a newsagent and tobacconist, was Hackney born and bred, and a steady worker who had been employed as a tobacco stripper from an early age.  Tobacco was big business in Victorian London, bringing in significant revenue to the government.  Huge quantities of the leaf came into London through the docks.  The warehouse at Tobacco Dock could store twenty-four thousand hogshead at a time, the hogshead being a specific size of barrel containing four hundred and fifty-four kilos of tobacco. 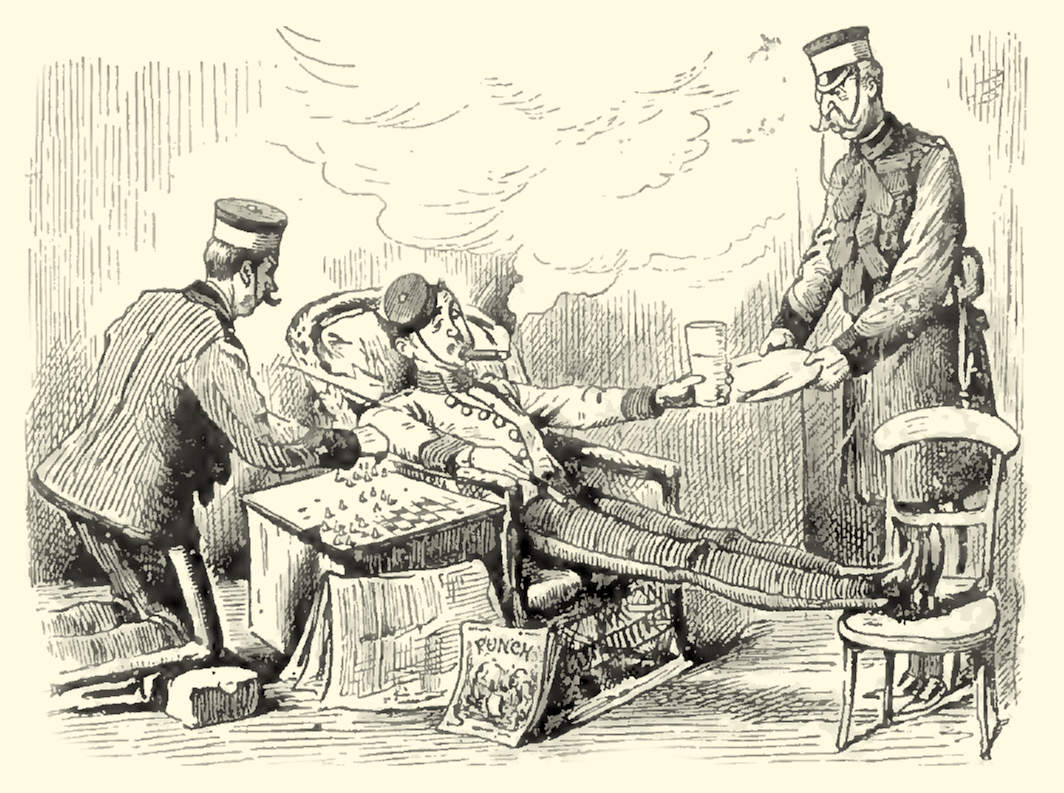 Since the sixteenth century tobacco consumption had become popular in the British Isles.  But smoking as we know it was not universally popular.  One early opponent was King James I, who in his polemic A Counterblaste to Tobacco wrote that smoking was a

custome lothsome to the eye, hatefull to the Nose, harmefull to the braine, dangerous to the Lungs, and in the blacke stinking fume thereof, neerest resembling the horrible stigian smoke of the pit that is bottomeless.

Cigars gained popularity after the Peninsular War—they were introduced to British soldiers in Spain—and cigarettes during the Crimean War. 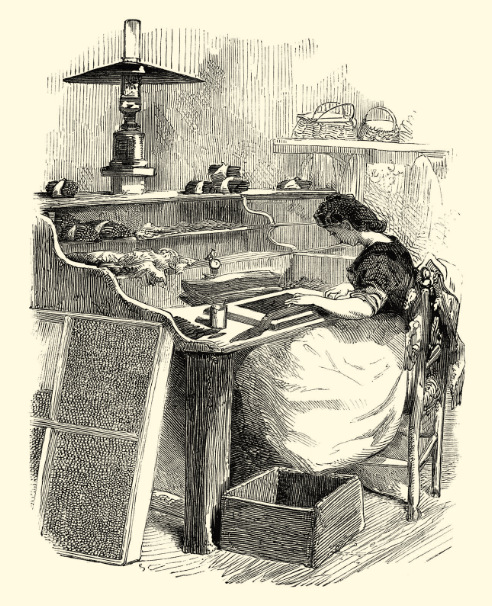 Most of the London tobacco factories, of which there were at least seventy-six, were situated in and around Hackney and Bethnal Green.  Forty-nine made mainly cigars, and it was in one of these that Steib would have worked.  Tobacco workers, who served an apprenticeship of up to five years, were skilled, relatively well-paid and unionised.  Liquorers would wet the leaves so they could be safely handled.  Strippers would carefully remove the central rib from the leaf to avoid damage or bruising.  Cigar makers rolled the cigars by hand, which gave better results than the moulds used in some factories.

But in spite of having a steady job Steib did not have a steady home life.  His mother had died in the year before he appeared in court, and his widowed father’s hasty new marriage to the owner of a sweet shop may have precipitated the young man’s exit from the family home.  But before long his father and stepmother emigrated with his siblings, in search of a better life in the United States.  He alone remained in England, perhaps for the sake of Mary Ann.

A picture of familial bliss by Alfred Bouchette.  Image in Frederick Langbridge Love-Knots and Bridal-Bands (1883) between pages 142 and 143.

I am pleased to report that this story has a happy ending.  For in 1875 Louis Steib and Mary Ann Brooks were married.  They had seven children, and spent the next fifty-four years together in and around the Bethnal Green area.  Steib took a brief sabbatical as an omnibus conductor before the tobacco trade lured him back for the rest of his working life.

Undesirable or Unlucky Maid? Lucy Constable and the Walworth Robbery

A Young Father, or, Shocking Immorality in the Pentonville Road