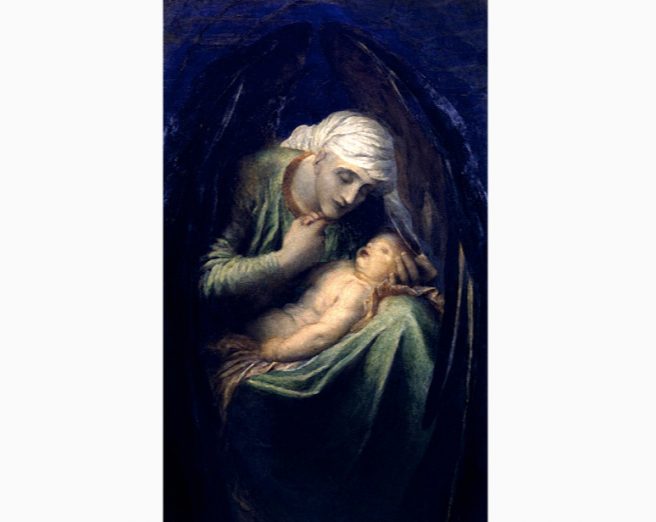 Lithograph of the house of Mercy in Clewer.  © British Museum

On the morning of Saturday the 25th of May 1860 a small parcel sent from London arrived by train at Windsor railway terminus addressed to “The Mother Superior, House of Mercy, Clewer near Windsor”.  A Great Western Railway porter set off to the neighbouring area known as Clewer New Town, and on arriving in Hatch Lane he handed the box to the House of Mercy gatekeeper, Elizabeth Harper.  Finding the parcel in the Mother Superior’s sitting room the maid, Maria Bensley, began to unpack it.  First there was a sheet of reused brown wrapping paper bearing the words “J  Mirehouse, Esq, Brownslade”.  Underneath, in a bed of old clothes consisting of an apron and a shift, she found the lifeless body of a tiny child, wrapped only in a napkin embroidered with the letter “M”.

It is an odd fact that the police were not informed of this gruesome discovery for nearly ten hours.  Possibly the Mother Superior was away, and any action had to wait for her return.  Probably, though, she was not away, and was concerned that making the discovery public would show the House of Mercy in a bad light.  The matter might even prove awkward for Mr J Mirehouse, who, as it happened, was a particular friend of hers.

Whatever the reason for the delay, one of the ladies from the House of Mercy went to find Inspector O’Neill, head of the local police, and said that Mother Harriet wished to consult him.  In all likelihood Inspector O’Neill was not surprised by the contents of the box, given the reputation of the inmates of the House of Mercy, which was a home for penitent “fallen women” run by an order of Anglican nuns.

SHAVEN-HEADED PENITENTS
In the nineteenth century a woman could be outcast and labelled as such—she had “fallen” from the grace of God—if she had offended society by “losing her innocence”.  She lost her innocence if she had sex outside marriage.

These women might have worked in the sex trade or they might have been victims of rape or sexual abuse.  They might have been seduced, and given birth to illegitimate children.  They might simply have revealed what was viewed as an unnatural interest in sensual matters.  Some people wanted them to be kept separate from decent society, so as not to taint their more innocent or biddable sisters.  But there was a growing conviction that these woman could be rescued.  By instilling Christian values in them, and helping them to learn useful skills, they might be enabled to find respectable employment with sympathetic people who could ignore their previous lives.  Or they might be given the chance to emigrate, to make a clean break, and hopefully to end up in a redemptive marriage. 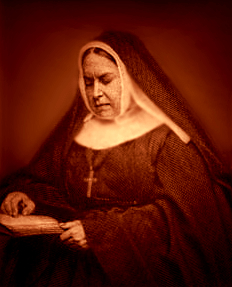 Harriet Monsell, the Mother Superior of the Community of St John the Baptist.  Portrait in Thomas Thellusson Carter Harriet Monsell. A Memoir (1884).

The Clewer House of Mercy, which had developed from the philanthropic activities of a Mrs Mariquita Tennant, the comfortably off widow of a clergyman, was one such religious penitentiary for outcast women.  Encouraged by Thomas Thellusson Carter, the parish rector, Mrs Tennant by 1849 had twelve unfortunate women living in her house, “The Limes”.  (Coincidently Charlotte Julia Weale, sister of the none too pleasant William Weale, was one of Mrs Tennant’s helpers.  You can read about them in another post.)  Reports suggest that running a home for penitents was no easy matter: the contrast between the life experience, opportunities and expectations of the middle-class charitable ladies and their largely working-class charges made for a tense atmosphere.  Another of Mrs Tennant’s assistants was an aristocratic Irish clergyman’s widow called Harriet Monsell.  By 1852 Harriet had become an Anglican nun, and the Mother Superior of the Community of St John the Baptist, which had been set up to run the House of Mercy.  A historian of the Victorian age notes that

Most penitentiaries for sexually and morally outcast females were established and operated by another group of Victorian sexual radicals – Anglican nuns1.

Clewer grew into a large establishment with its buildings designed free of charge by the architect Henry Woodyer.  The 1861 census shows a community of eleven sisters, some visitors, five servants and sixty-eight penitents who are only listed by their initials.  The shaven-headed penitents lived a fairly austere life, allowed out only once a week for a walk in Windsor Great Park.  Windsor was a garrison town: to give these girls the best chance of not being drawn back into their previous lives, measures were taken to ensure that they did not meant the local guardsmen.

PLEASE DON’T CRY!
At eleven o’clock on Monday night Inspector O’Neill made his way to 60 Upper Seymour Street in Portman Square, the home of Mr John Mirehouse, barrister, landowner and owner of Brownslade in Pembrokeshire in Wales.  He was accompanied by Inspector Steer of D (Marylebone) Division.  In the presence of the butler, John Weavings, the two policemen questioned Sarah Gough, a thirty-year-old widow who was both cook and housekeeper.  They asked if she had recently been delivered of a child.  In astonishment she agreed that this was so, but could not imagine how they knew, as she had told nobody at all.  When asked to explain the circumstances of her child’s death she asked to speak to Inspector Steer alone, and proceeded to recount a sorry tale which would have been all too familiar to a metropolitan policeman. 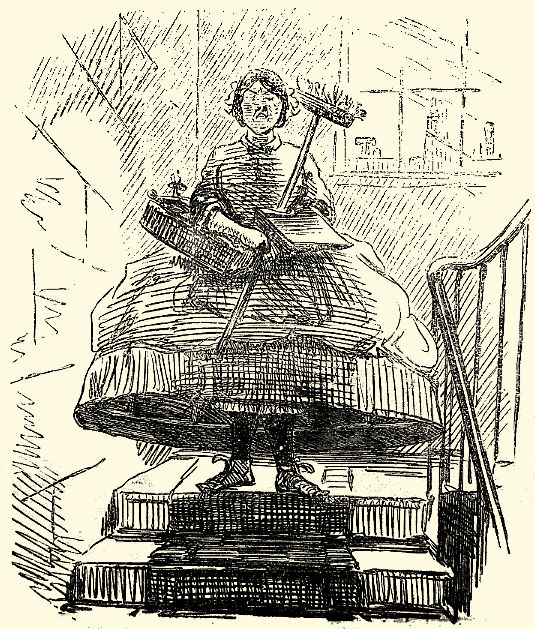 In 1859 she had been in service in Dublin.  She was looking forward to marrying an Irishman, a policeman, who on discovering she was pregnant resigned from the force and emigrated to Australia.  (Oddly enough, Inspector O’Neill was also a Dublin-born policeman, which may have been why Sarah preferred to speak to Steer.)  She then came to London, obtained a post with Mr Mirehouse, and hid the pregnancy with the help of a concealing crinoline.

On Wednesday the 22nd of May she went into labour in her bedroom.  “The poor little dear was born at about twenty to six,” she explained.  Soon after the birth, hearing the bell summoning her to work, she left the baby alone on the bed.  The poor woman must have been exhausted, distraught and in shock after the ordeal of giving birth all on her own.  No doubt she was frightened that the baby might cry, and reveal her secret, which would have resulted in instant dismissal without any chance of a good reference.

After finishing work Sarah dragged herself upstairs, where she found the baby on the floor.  She saw the child move, so at this stage it was still alive.  Later she took the baby into bed with her, and then, waking at three in the morning, she found that the little girl had died.

That her experience was not uncommon can be seen when one examines all the infanticide cases that came up at the Old Bailey between 1839 and 1906.  There were common patterns between the cases: women managing to hide their pregnancies from families and employees, in most cases giving birth alone and without any assistance, and in many returning to work almost immediately after the birth was over.

The next morning Sarah packaged the baby in a box, and took it to the Gloucester Coffee House on the corner of Oxford Street and Park Street.  The Gloucester operated as a booking office for sending packages by rail.  Then having paid for the box to be delivered to Clewer, Sarah returned to work.

WHAT MADE HER DO IT?
But what made Sarah send the dead baby to Clewer?  No doubt she was disturbed after the trauma of the birth and the death of the child—but her actions suggest a degree of planning. There had been nothing to stop her discarding the child’s body if she had wanted to, for dead babies were not an uncommon sight on the streets of Victorian London.  In 1862 a hundred and fifty dead infants were found in streets of the capital. 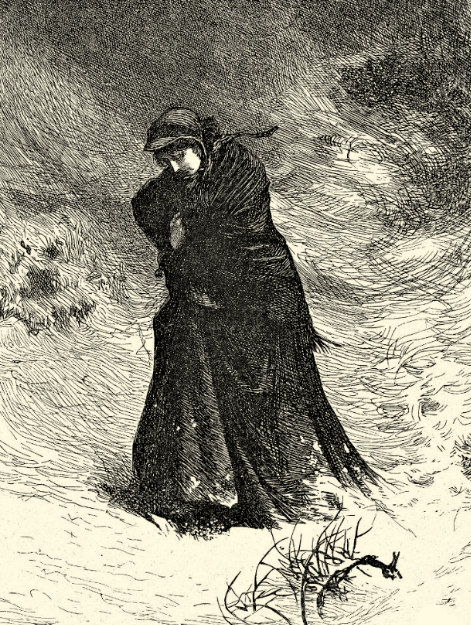 Had she perhaps sent it to Clewer for religious reasons?  At this time children who were either unbaptised or illegitimate were not buried in consecrated ground.  Sarah may have thought that the nuns, being ignorant of her poor child’s origins, would ensure that she received a Christian burial.  Interestingly, Sarah Gough later told the court that she had no personal knowledge of the House of Mercy, and only found out about it from a visiting lady’s maid.  This may be true, but I cannot help wondering if she was a former penitent, who had turned her life around only to go wrong again.

What had been her plans if the child had lived?  Had she intended to leave it at the Foundling Hospital in Bloomsbury, or perhaps even to try to get it admitted to the St John’s Orphanage in Clewer?  The other course of action would have been to farm the baby out, paying for someone else to look after it so she could keep her job at the Mirehouse establishment.

Who were Sarah’s employers?  The establishment appeared to consist of a twenty-four-year-old barrister—John Mirehouse—his widowed mother Elizabeth and his various siblings.  His father John, a wealthy lawyer who died in 1850, owned the Brownslade estate in Pembrokeshire.  Elizabeth Fisher was the daughter of John Fisher, the Bishop of Salisbury and great friend and patron of John Constable.  Fisher also gives us a link with Windsor, as he had extensive connections with the Royal family, and had been Canon of St George’s Chapel.  When reporting the story the newspapers said nothing about the Mirehouse family, except that Sarah worked in their house.  Whether they were kind to her after the death of her daughter, or dismissed her, is not known. 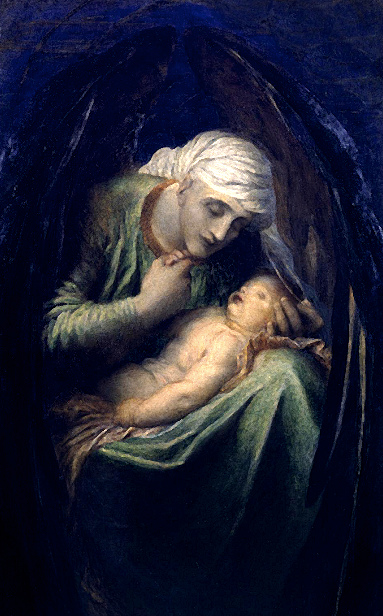 THE CRIME OF CONCEALMENT
At the inquest a doctor explained that the child had been well grown and full term.  Marks seen on her forehead, neck and face might have been caused by an unassisted labour rather than any violence.  He noted that the umbilical cord had not been tied, and suspected that the baby had died of a haemorrhage.  It was agreed that death had been caused by the absence of proper assistance at birth.  This meant that when Sarah was tried at the Old Bailey she was charged not with murder, which was a capital crime, but with concealing a birth, which might result in up to two years in prison.  In fact after 1849 no woman was hanged for the death of a child under the age of one, and indeed Sarah was treated sympathetically.  She was sentenced to one month’s imprisonment in Newgate.

I cannot tell you what happened to Sarah after she was released from prison.  She may be one of the unfortunate Sarah Goughs mentioned in contemporary newspapers who came before the courts for this, that or the other misdemeanour.  Perhaps she is one of the other Sarah Goughs who are found in domestic service in the 1861 census.  She may even have emigrated, sharing the same fate as some of the girls from Urania Cottage, the house for fallen women that Charles Dickens was instrumental in setting up.