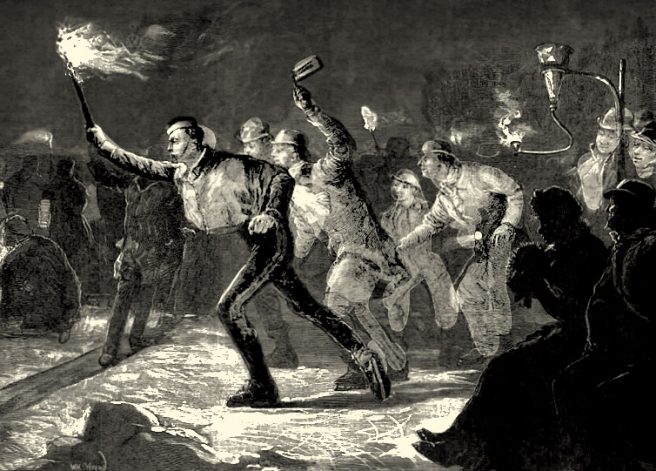 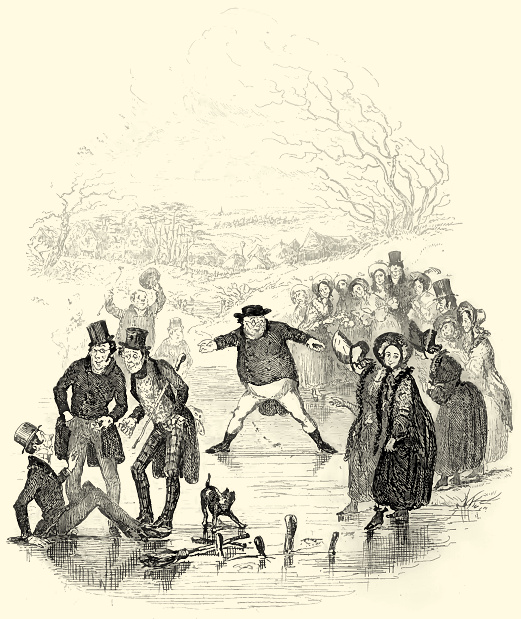 Mr Pickwick slides on the ice.  Image by “Phiz” in Charles Dickens The Pickwick Papers (1837) chapter 30.

Readers who enjoy their Dickens will remember Mr Pickwick sliding on the ice at Dingley Dell.  Hablot Knight Browne—“Phiz”—illustrated the scene in the 1837 edition of the novel, and, although his was only the first of many interpretations of this memorable episode, it has never really been surpassed.  Pickwick used to slide “on the gutters” when he was a boy, but that was a long time ago, and he takes to the ice with understandable anxiety.  “Keep the pot a-bilin’, Sir!”, says Sam Weller to keep things moving.  Dickens has caught perfectly the moment when nervousness gives way to delight.  The moment, too, when the ice cracks, and Pickwick disappears into the freezing water, leaving his hat and gloves and handkerchief floating on the surface.

Interestingly, frolicking on ice was quite a fashion in the nineteenth century.  The newspapers gave over many column inches to this risky sport, and more than a little journalistic glee crept into reports on the accidents that befell unlucky skaters.  In January 1867, for example, the Morning Advertiser told the story of the little boy who was playing on the frozen surface of the Grand Surrey Canal in South London.  Somehow he fell through the ice, and had to be saved first by a brave gentleman who happened to see the accident, and later by a doctor who visited him at his home in Camberwell.  Curiously, the boy was called George Snow. 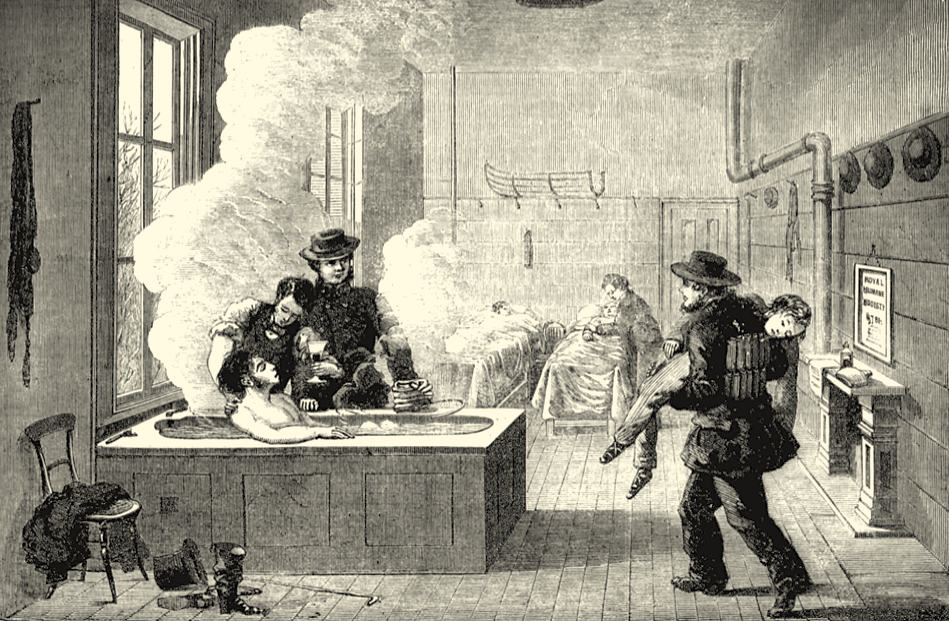 The receiving house in Hyde Park operated by the Royal Humane Society.  Image in The Illustrated Times 26 January 1861.

HEROES IN THE PARKS
Many of the reports have a common structure.  First the location is identified, often with statistics, which typically give the thickness, or the thinness, of the ice and the number of people twirling and swirling on its surface.  Next the accident the reader has been waiting for is described.  Finally the heroism of rescuers and medical attendants is recorded.  Here is another paragraph from the same issue of the Morning Advertiser, recording an incident on Clapham Common:

the ice of the ponds on this common is now between 3in. and 4in. thick, and during the day upwards of 6,000 persons, including a number of ladies, disported themselves upon the frozen surface.  Several persons were tripped up by the skaters, and received slight injuries, but they were attended to by Mr. H. R. Silvester, of Clapham-common.  Several immersions also took place. 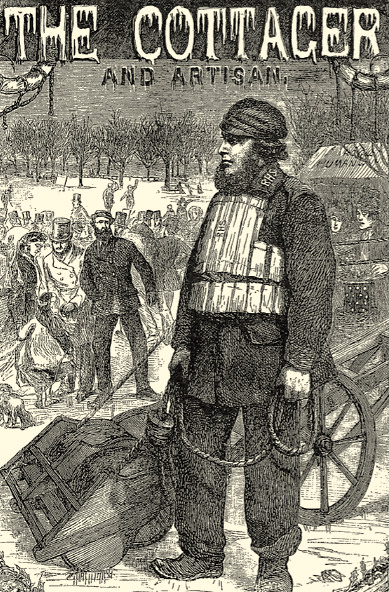 An “iceman” of the Royal Humane Society.  Image in The Cottager and Artisan 1 December 1865.

Reports of this kind abound.  The London papers naturally focused on the water in the parks, and often the heroes were members of the Royal Humane Society, the organisation that had been rescuing lives in the metropolis since the late eighteenth century, when the first receiving house, or emergency medical station, was built in Hyde Park on the north bank of the Serpentine.  And they really were heroes.  Many Londoners who fell through fragile ice in winter, or who got into difficulty while swimming in other seasons, owed these courageous individuals their lives, and the image of the gritty “iceman” and his wide-eyed admirers on the front cover of an 1865 issue of The Cottager and Artisan needs no explanation or comment.

NIGHT’S FRIENDLY GLOOM
A particularly magical variation on this theme was skating by torchlight.  The illustrators naturally saw these scenes, in which light shines through the dark to brilliant effect, as opportunities to demonstrate signficant skill, and many tried their hand at it.  The best created a convincing chiaroscuro, the raking illumination from the burning torches revealing expressions of joy and excitement.  The writers sidelined grim accounts of accidents on the ice in favour of breathless and whimsical prose.  So in 1871 the Graphic described the nighttime skaters on the Serpentine rather beautifully, albeit with a tinge of disdain for an activity that encouraged uninhibited and raucous behaviour:

The friendly gloom of night, aided by the glow of the torches, eliminates every evidence of vulgarity; the swift-gliding skater twisting gracefully, flambeau in hand, seems to the eye of fancy some gigantic fire-fly; while the professional skate-fasteners, as they creep about the ice, with lanterns at their waists and cane-bottomed chairs in their hands, take the resemblance of humble and unobtrusive glow-worms.

As it evolves the scene is a glorious ensemble in which the sight of the skaters gyrating and tumbling combines with the cries of the snack-sellers, and the clatter of the sticks of hockey-players, and the music of the buskers playing concertinas or cornets. 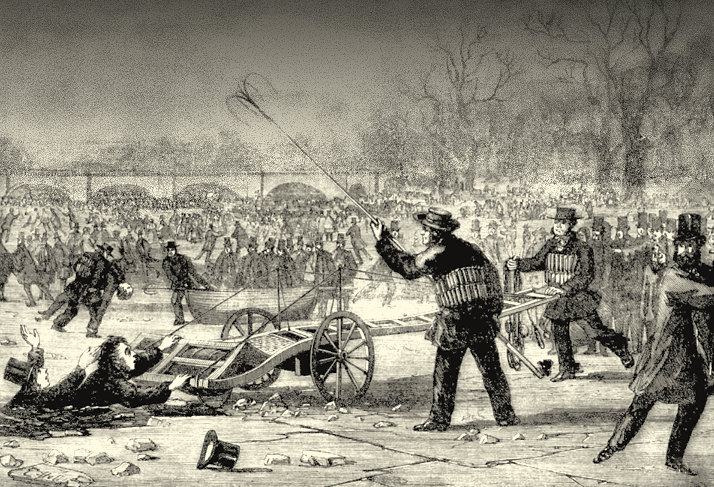 Men of the Royal Humane Society rescue victims of a break in the ice on the Serpentine.  Image in The Illustrated Times 26 January 1861.

A GLORIOUS RINK
However, press coverage of these seasonal japes was quick to emphasise the perilous nature of unregulated skating in the London parks.  The same 1867 issue of the Morning Advertiser that reported little George Snow’s accident commented on the huge numbers taking to the ice all over the capital.  A scene “of the greatest confusion” was created by the fourteen thousand Londoners who flocked to St James’s Park.  Victoria Park was also overrun, and, although there were no fatalities, the ice was judged to be “in a very dangerous condition”.  But never mind: the ornamental waters in Battersea Park were “tolerably safe”. 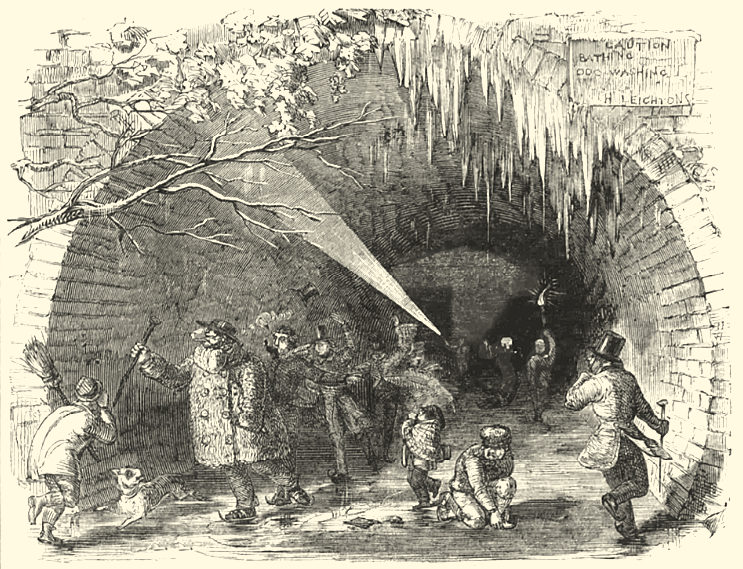 Skaters in the Regent’s Canal Tunnel.  Image in The Illustrated London News 3 March 1855.

The area of greatest concern that year was the Serpentine—a terrible tragedy had only recently occurred—where the police were deployed to prevent nighttime skating.  The fear was that large numbers of people descending on the ice without the benefit of daylight would generate unacceptable danger, and some constables were indeed dispatched to the Serpentine at about six in the evening on a particularly busy Thursday.  They arrived too late to keep people off the ice, but fortunately there were no serious incidents.  Instead there were curling matches, and races, and a gentleman who was treated by the Royal Humane Society for cuts to his nose and head made a donation of a guinea.

Yet another variation on the essential theme was recorded in the early spring of 1855, when the Regent’s Canal froze in intensely cold weather.  The skaters who braved the ice discovered that the Maida Hill Tunnel afforded an unusual form of entertainment.  The ice was strong—no snow could sit on its surface—and the tunnel became a glorious rink a quarter of a mile long.  Icicles dangling from the roof added a picturesque touch, but even nature at her gelid best could not distract the skaters from the main point of the exercise, which was of course to make loud choo-choos and whistles as they hurtled along, like so many express trains.  There were the usual concerns, and the police did step in once, but after that they allowed the trains to run under their own steam, as it were. 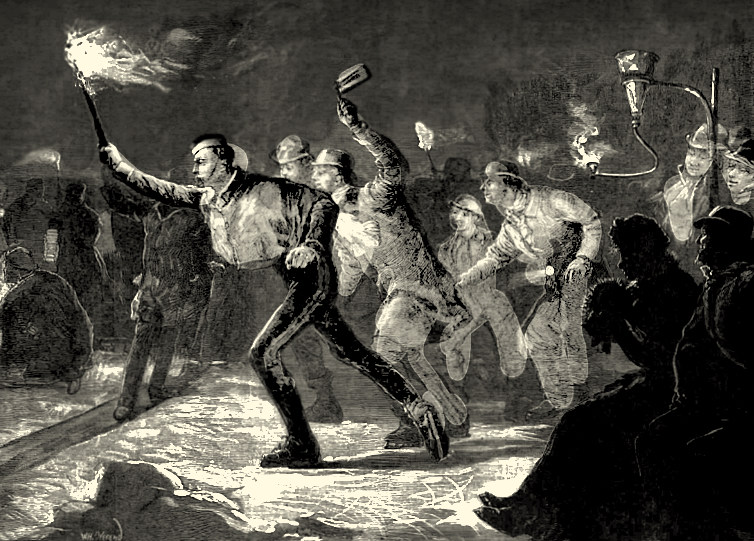 Skating on the Serpentine by torchlight.  Image in The Illustrated London News 29 January 1881.

ENJOYING THE LIMELIGHT
The strangest of all the nighttime events featured a different sort of train on skates.  On a bracing January day in 1861, at nine o’clock in the evening, a gent appeared on the ice of the crowded Serpentine with red and white lights attached to his person, and a firebrand in each hand.  As he was obviously the engine the carriages quickly lined up behind him—all eight hundred of them—and off they went.  They hurtled down from the east end of the Serpentine to the bridge, where they turned, and hurtled back again.  Meanwhile a brass band played “Bold Robin Hood was a forester good” and other lively tunes.

But the highlight of the entertainment was a mock battle.  The skaters divided into two groups, and armed themselves with weapons, which were fireworks.  After a royal salute and a brass band rendition of “God save the Queen”—Victoria, of course, not Elizabeth—the attacks began.  Twenty-one crackers were discharged, the noise of which was so great that people outside the park wondered if the gunpowder stored in the Magazine in West Carriage Drive had exploded.  After that there was something of a free-for-all, both sides letting off rockets and squibs and Roman candles and goodness knows what other pyrotechnic devices.  For several hours the grand purlieus of Kensington Gardens were bathed in a sort of eerie limelight, no doubt much to the annoyance of the staider residents. 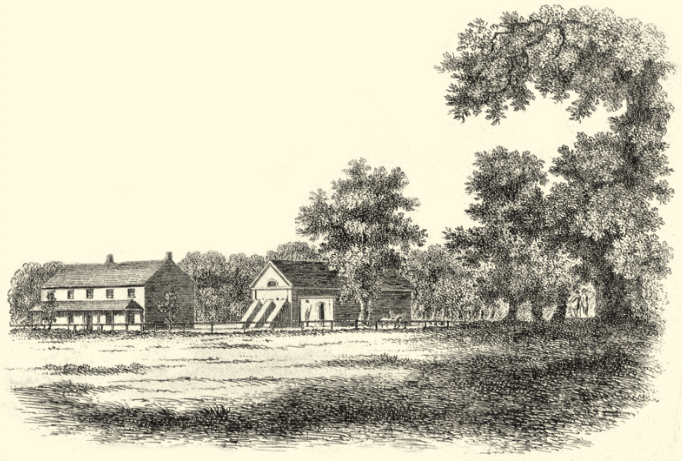 The Magazine near the Serpentine, in the centre of the scene, was built in 1805 by the Board of Ordnance to store gunpowder for troops training in Hyde Park.  Etching dated 1807.  © British Museum

SAFER NOW
One wonders what the stalwarts of the Royal Humane Society made of it all.  They were certainly kept busy, and some of the injured parties who were brought to the receiving house had taken fireworks full in the face.  Poor William Morris of Charlwood Street in Pimlico took a direct hit to the eye, and, as the Morning Chronicle noted with ill-concealed indignation, Corporal Robert Shields, a celebrated recipient of the Victoria Cross,

who had passed through the whole of the Russian war without receiving a scratch, although he performed such feats of daring, was much injured by one of the stray fireworks as he was passing along the bank. 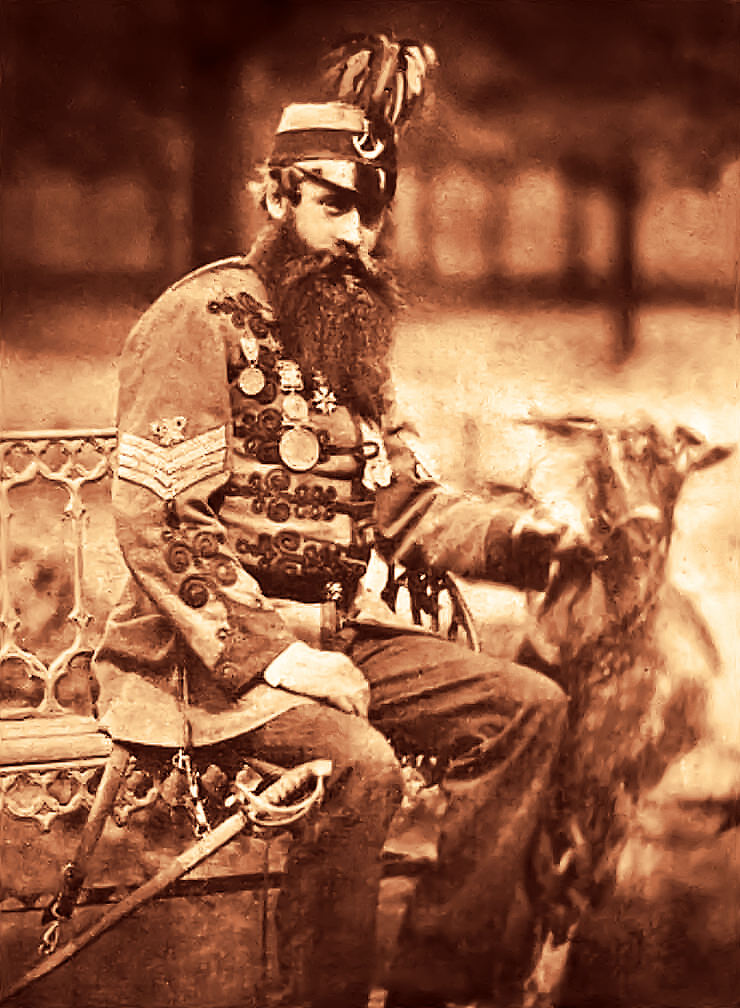 Corporal Robert Shields served with the Royal Welch Fusiliers during the Crimean War. He was awarded the Victoria Cross for his extraordinary courage in rescuing a wounded officer under heavy fire.  Photograph dated c.1855.

A number of unfortunate women were severely burnt when exploding serpents were thrown at the crowds on the banks.  Phoebe Hope of Vauxhall had her clothes set on fire by flying sparks, and she was only one of about twenty spectators who suffered this assault on their dignity.

At first glance the nineteenth-century obsession with ice activities looks very familiar: the simple pleasure experienced by Mr Pickwick and his friends is a common one.  But looked at another way the phenomenon appears to belong to a fast-receding past.  These days canals and ponds do not usually freeze over, at least not in the capital.  Even if they did, it is inconceivable that thousands of Londoners would be allowed free access to the ice in the way that they would have been a hundred and fifty years ago.  Our world is more cautious, less adventurous, and, let us be honest, a lot safer too.

A Matter of Honour, Your Honour