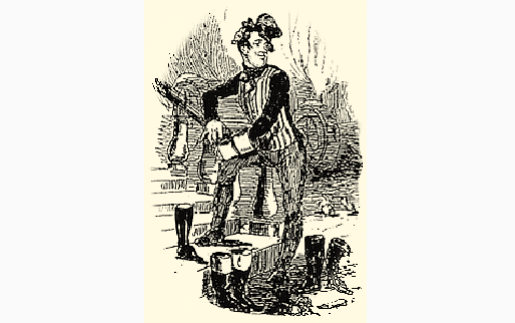 One of Charles Dickens’s liveliest characters—a character drawn with unerring precision and a sharp ear for idiosyncrasies of language—never made it into his novels.  Instead, he occupies an honourable place in the great writer’s personal correspondence.  Unlike Bill Sykes, or Stephen Blackpool, or Sam Weller—more of Sam Weller later—he was real.  He was a servant, and his name was William Topping. 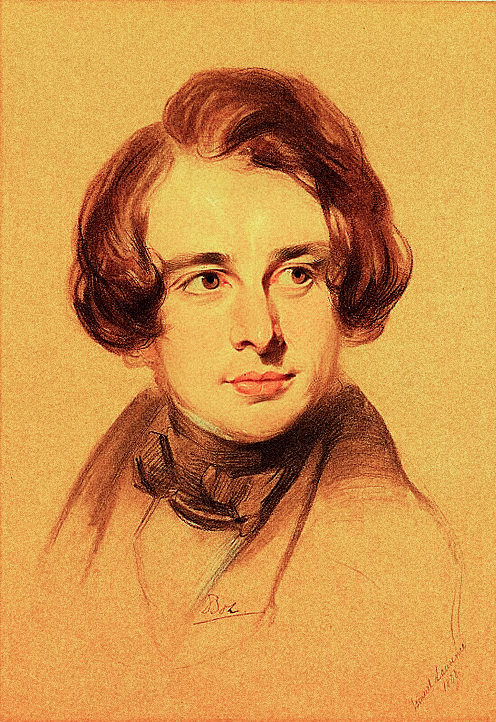 Drawing of Charles Dickens in 1838 by Samuel Laurence.

Topping entered Dickens’s service in 1839, that is to say between the appearance of Nicholas Nickleby and The Old Curiosity Shop.  With one brief hiatus, in 1840, he carried on in this capacity until 1851, the period sandwiched by David Copperfield and Bleak House.  He was loved and ridiculed by his master in equal measure.  He was a man of the people—the salt of the earth.  He was the quintessential overlooked Londoner.

IN DEVONSHIRE TERRACE
The precise moment at which Topping came into Dickens’s life was 2nd March 1839—a Saturday.  Dickens was then living at 48 Doughty Street, the home in Bloomsbury where he and his wife Catherine had their first three children, and which he shared with his younger brother, Frederick, and Catherine’s younger sister, Mary, and where Mary tragically died.  But later that year, in December, the Dickenses acquired the lease to 1 Devonshire Terrace.  The Terrace was a row of three houses on the west side of Marylebone High Street, just off what was then the New Road but is now Marylebone Road, and almost opposite the York Gate entrance to Regent’s Park.  They are no longer there—they were demolished in the late 1950s—but a sculpted mural on the side of the office block that replaced them commemorates their illustrious former occupant. 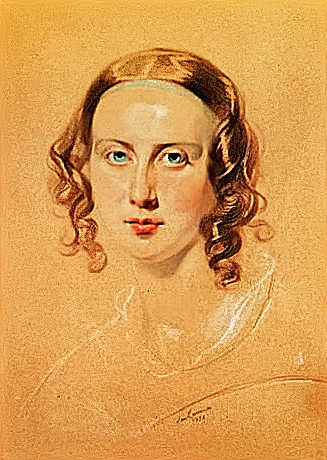 Drawing of Catherine Dickens in 1838 by Samuel Laurence.

Topping had originally been engaged to replace another servant, a wretch by the name of Henry, who had been dismissed after speaking rudely to Catherine.  The new man was a groom, and, when the Dickenses moved from Doughty Street to Devonshire Terrace, he lived over the coach-house and stable a few doors down from the main house in an annexe called Woodward Court Mews, where his neighbours included farriers and coachmen.  Like Dickens, he was a family man.  He was thirty years of age, and had been born in Kennington.  The previous year—almost to the day—he had married a woman by the name of Martha Perry.  At the time of their marriage they were both living in Gower Street North, just over a mile from Doughty Street, and Martha was already carrying their first child.

A FLAME-HAIRED SCHEMER
Topping was quite a character.  He was very short, but he would have been hard to miss, for he sported a head of hair that Dickens described as “fiery red”, adding wryly that such distinctive colouring was not exactly à la mode.  He even suggested that Topping was getting redder as he grew older, though it is not entirely obvious what he meant by this!  As for Martha, the years took their toll.  By the end of 1842 she had given birth to a son, John, and two daughters, Martha and Mary.  As might be expected, her life as a working-class mother was hard, and Dickens observed—not with any discernible sympathy—that she was now “dirtier & more down at Heel”.  One suspects that Catherine, who was now a mother of four, would have been more understanding. 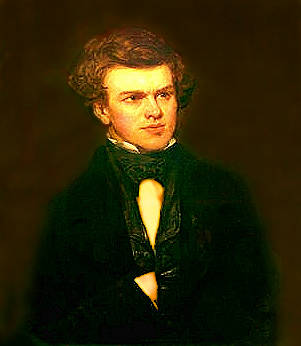 Portrait of a young John Forster in 1830 by Daniel Maclise.  © Victoria and Albert Museum

In some respects, Dickens had the Victorian gentleman’s condescending attitude to his servant.  He was quick to comment on Topping’s peccadillos, making a half-humorous reference to a fondness for the bottle here, and an irritated comment on the mishandling of a horse there.  His friend and biographer, John Forster, was even less patient.  To him Topping was “a highly absurd little man with flaming red hair”, a schemer who compromised himself with “secret devices of his own”.  Maybe it was with good reason that Dickens, writing at about this time, said of Forster that he “is more silent than in the old Days & his Nose is higher”.

OH FOR TOPPING!
The background to Forster’s acerbic remarks was a little dispute that arose between Dickens and two neighbours in 1840.  The casus belli was the chimney of Dickens’s stable, which apparently smoked.  Topping, acting as his master’s spokesman, fielded the complaints, and, although he meant to conciliate each of the complainants in turn, he only succeeded in angering both.

Even so, Dickens was fond of his servant-cum-groom.  At odd moments in the letters, when he lets his guard down, Topping is “trusty”, and even “gentle”.  He particularly valued him from a distance, and, waiting to return to England from New York in 1842, he exclaimed “Oh for Jack Straw’s!”—a much-loved tavern in Hampstead—“Oh for Jack!”—John Forster—“oh for Topping!—oh for Charley, Mamey, Katey.”  Naturally he ran the poor fellow off his feet.  But he talks about him constantly, and it is difficult to see in this anything other than appreciation.  Topping may have been Dickens’s factotum, but he enjoyed a degree of respect.  Dickens liked Topping, in spite of and maybe even because of his awkward manner, and his lack of polish, and his bumbling way of going about his duties. 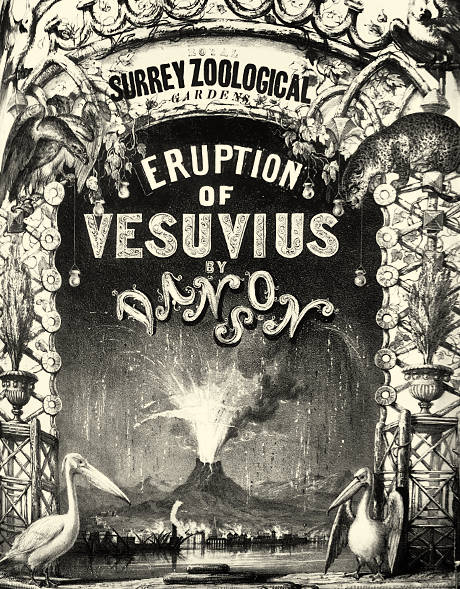 Above all, Dickens liked him for the way he spoke, and he captured his individual speech patterns with marvellous accuracy.  When one of the neighbours got him on to the subject of “the chim’ley”—the smoky chimney—he reportedly declared that “my master’s a genelman as wouldn’t annoy no genelman if he could help it”; and when the pet raven that is the subject of a post elsewhere on this blog started to have fits, and pluck its feathers out, he put its odd behaviour down to “aggerawation”.  He talked incessantly about the pyrotechnical display at the Surrey Zoological Gardens, malaproping Mount Vesuvius as “Mount Consumious”.  He thought that the United Service Club was the “United Servants Club”, and he was surprised to learn that one of its members, who was known to Dickens, was not after all a retired flunkey, but an officer in the army. 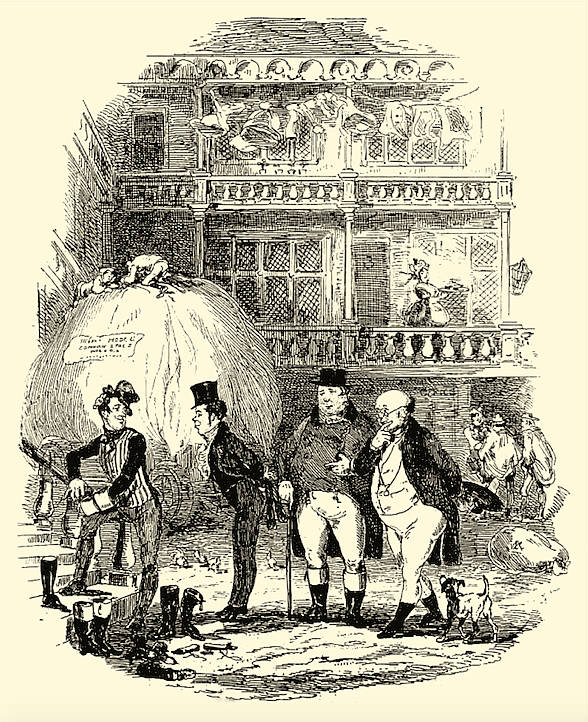 The first appearance of Sam Weller by Hablot Knight Browne, otherwise known as “Phiz”.  Illustration in the 1836 edition of Charles Dickens The Pickwick Papers.

Dickens was reminded irresistibly of Sam Weller.  He had published The Pickwick Papers, his first novel, a short while before Topping came into his life, and he must have thought of him as the flesh-and-blood equivalent of his fictional creation.  Topping, like Weller, was a real Londoner.  He even spoke like Weller, swapping “v” for “w”, and “w” for “v”, and Dickens’s record of a conversation could have come straight from the pages of the Papers:

“I vent to the Club this mornin’ Sir.  There vorn’t no letters Sir”—“Very good, Topping”—“How’s Missis Sir?”—“Pretty well, Topping”—“Glad to hear it Sir.  My Missis an’t wery vell Sir”—“No!”—“No Sir”—“She’s a goin’, Sir, to have a hin-crease wery soon, and it makes her rather nervous Sir; and ven a young ’ooman gets at all down upon her luck at sich a time Sir, she goes down wery deep Sir”—To this sentiment, I reply affirmatively.  And then he adds, as he stirs the fire (as if he were thinking out loud) “Wot a mystery it is!  Wot a go is Natur!”—with which scrap of philosophy, he gradually gets nearer to the door, and so fades out of the room.

A TRIPLE BLOW
The passage quoted above comes from a letter written in September 1842.  Behind it lies a curious bit of history, for, not long after, Martha Topping gave birth to Mary, the third of her three children.  Her husband’s use of the word “hin-crease” or “increase” to refer to a soon-to-be-born child is rather old-fashioned, and a touch poetic, and Dickens has recorded it with obvious delight.  But we can only guess what lay behind the gloomy comment about expectant mothers being down on their luck.  Possibly Martha’s pregnancy was not going well.

Worse, though, was to come, in the form of not one but three family tragedies that followed one another in quick—cruelly quick—succession. 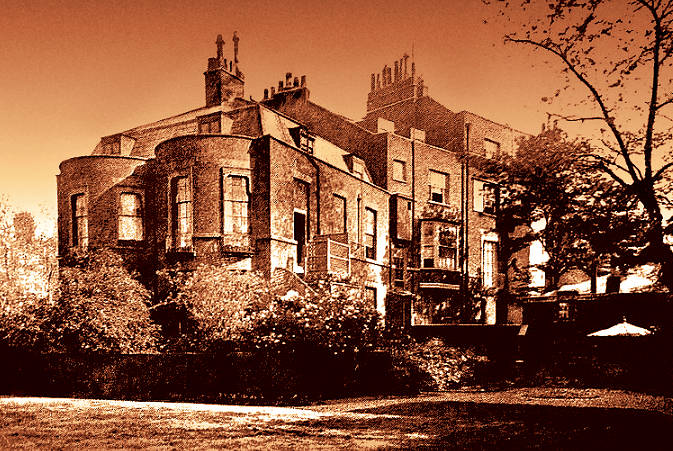 Photograph of 1 Devonshire Terrace.  Illustration in The Favourite Magazine.

The first of these befell the Toppings in 1846.  They were then living in a cottage north of Regent’s Park in Townshend Road, no doubt having been forced to leave their mews home in Devonshire Terrace by the demands of a growing family.  And there, one late summer’s day in 1846, their little daughter Martha died of diphtheria.  She was six years old.

Given the nature of the first of the three tragedies, the details of the second and third make grim reading indeed.  For only a year later, in 1847, and again as the year was on the wane, the older Martha—Mrs Topping—died too.  She had been suffering from measles and bronchitis, and three days before her death she had given birth to another daughter.  They had called the baby girl Martha, and they must have hoped that by giving her the name of the sister she never knew they would ease the pain of their loss.  But fate would have it otherwise, and, at the age of three weeks, the infant Martha died of malnutrition.  All three—the mother and her two namesake daughters—were laid to rest in the parish burial-ground in Marylebone.

Topping, who had been forced to endure—and to witness—the death of his wife and two of his children in a single twelve-month period, remarried in 1848.  His second wife, Elizabeth, a blacksmith’s daughter, came from Truro in Cornwall.  In 1850 she give birth to a son, Frederick, and we find the three of them in the 1861 census living at 33 Moscow Road in Bayswater.  Devonshire Terrace was a thing of the past, as were the Dickenses, who had themselves moved out in 1851.

Photograph of Charles Dickens riding with members of his family.  Sadly, the groom at the far left of the image is not William Topping!  Illustration in The Favourite Magazine.

POSTSCRIPT
William Topping died of pneumonia in 1874.  He was sixty-five.  In many of the official documents—the censuses, the marriage certificates, the death certificates—he is neither a servant nor a groom but a coachman.  He was taking his place in the story of his family, for his father, John Topping, had been a coachman, and the son of his first marriage, another John Topping, was a carter.

And there the story would end, were it not for one last little twist, namely that the younger John did not remain a carter all his life.  We know this because he married twice—his first wife died—and so he has two marriage certificates.  In the first certificate, dated 1868, he is indeed a carter, but in the second, dated 1871, he is a keeper in the zoological gardens in Regent’s Park.

Beyond this we know very little about him: there was no great writer in his world to keep his memory alive.  But it is a fair guess that, as a professional animal-handler, he would not have let himself be tormented by a raven in the manner of his father  Topping—the gentle Topping, the trusty Topping, the redheaded and Sam Wellerish Topping.