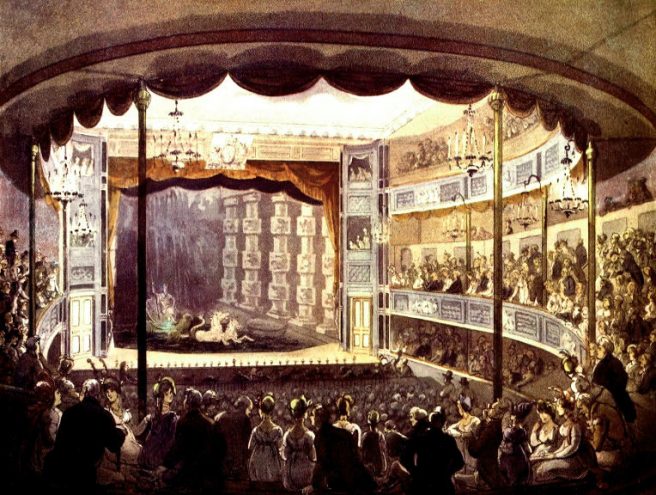 If you read my recent post on John Sackhouse, you will remember that I referred to the mysterious incident that took place in the Royal Dockyard in Deptford.  What follows is the full story.

First, a brief recapitulation.  Sackhouse was an Inuit who travelled to Scotland from his native Greenland on board a whaling vessel in 1816.  He made a name for himself first in Leith and Edinburgh and then later in London as a spectacular kayaker, who entertained crowds of admirers with demonstrations of his extraordinary skills.  The Admiralty took a particular interest, and recruited Sackhouse as an interpreter for the 1818 Arctic expedition under Captain John Ross. 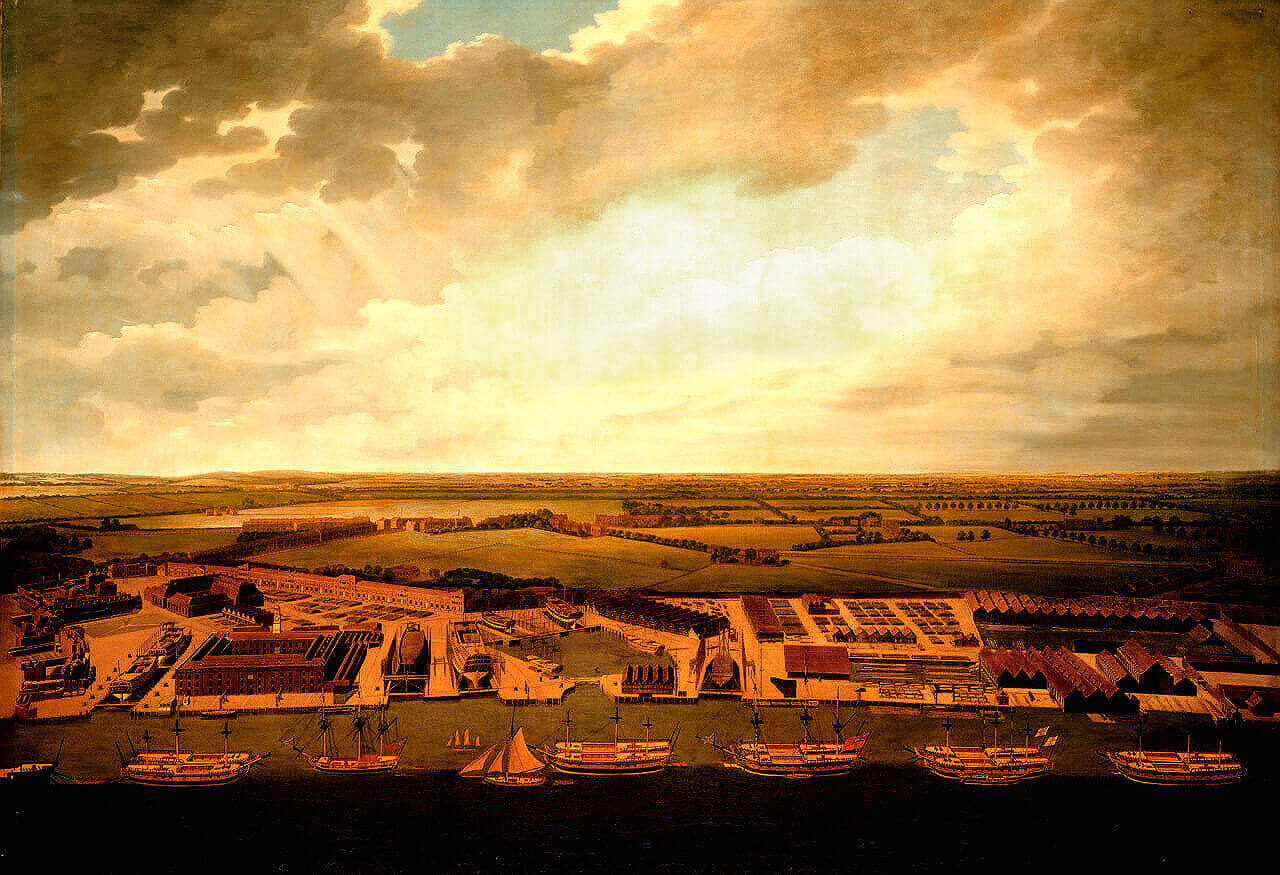 One day, as the ships were being loaded in Deptford, a stranger appeared on the dockside.  Sackhouse went with him to a nearby tavern, and when he emerged later, somewhat the worse for wear, he told the expedition officers that he was withdrawing from the expedition.

What had happened in that tavern?  Who was the man on the dockside?  What had he said to so unsettle John Sackhouse?  The answers to these questions will now be revealed!

DOWN IN DEPTFORD
Deptford is now a bustling district of Lewisham in south-east London.  But in 1818 it was a town in Kent, described by The General Gazetteer as “considerable for its fine docks”.  There were two divisions—Upper and Lower Deptford—and two parish churches.   There were also two pensioners’ hospitals for “decayed masters of vessels, pilots, and their widows”.

The history of Deptford has some curious little corners.  Near the docks stood a mansion, Sayes Court, which in the seventeenth century was the property of the great diarist John Evelyn.  In 1698 it was occupied for a time by Peter the Great, who had come to Deptford to study naval architecture—how to lay off the lines of ships, and how to cut out moulds—although he chose to work in the yard with the shipwrights.  Even so he had a lot of energy to spare, and he and his drinking companions trashed Sayes Court, covering floors with grease and ink, ripping furnishings, breaking chairs and windowpanes, and ruining Evelyn’s beautiful garden. 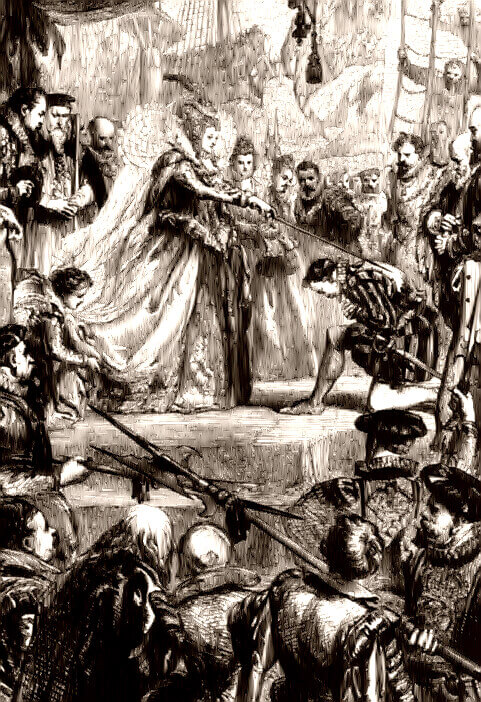 The Royal Dockyard was at one time little more than a dry dock, but it gradually expanded until it became the most important naval establishment of its kind.  The Golden Hind was kept there after Sir Francis Drake’s circumnavigation of the world, and, as it rotted, souvenir hunters took pieces of its timbers as keepsakes.  Drake was knighted on board on 4 April 1581, and it was in the dockyard that Sir Walter Raleigh “spread his cloak to carpet the footway” of Queen Elizabeth.  Some also say that it was from Deptford that the fleet that destroyed the Spanish Armada departed.

In later times other maritime celebrities were associated with Deptford.  Captains James Cook and William Bligh had ships refitted in the dockyard, and both HMS Neptune and Colossus, which saw action at Trafalgar, were built there.  But the end of the Napoleonic Wars in 1815 saw a decline in the demand for work of this sort.  By the time John Sackhouse arrived in 1818 with his kayak, much of the rasping of saws and the clanking of hammers would have died down.  The writer of a guide book published in the same year notes that more than three thousand dock workers had been employed in time of war but that “Deptford suffers proportionally during peace”.

Where in Deptford the stranger took Sackhouse we do not know.  But we do know from reports of the incident that were printed in the newspapers that he was from London.  He was connected in some capacity or other with the Aquatic Theatre at Sadler’s Wells.  And he was offering Sackhouse “several thousand pounds” to quit the expedition, to come up to London with his kayak and his harpoon, and to exhibit there instead.

THE AQUATIC THEATRE
The Aquatic Theatre was opened in 1804 by Charles Dibdin the younger, a dramatist and composer who was at the time the proprietor of Sadler’s Wells.  To all intents and purposes it was a vast tank made out of riveted copper, like a brewer’s vat.  Measuring ninety feet in length, and varying in width from twenty-four to ten feet to give the effect of perspective, the tank was fed through side channels from the nearby New River, an artificial stream that had been dug to supply water to the capital.  It was three feet deep, and when filled—by twelve men working at an Archimedean screw in long shifts—it held eight thousand cubic feet of water.  Another tank, fifteen feet square and five deep, was installed in the roof.  The main tank would be used to recreate seas and lakes, while its companion in the roof would provide a drop for cascades and waterfalls.

For the inaugural performance—The Siege of Gibraltar—men from the Woolwich dockyard were drafted in to build and rig one hundred and seventeen scaled-down versions of genuine warships.  These were manoeuvred by young men and boys swimming around the tank, wearing duffle coats against the cold.  Sails shifted in the wind, cannons roared, ships lost their masts and sank.  Children acting the part of sailors were thrown into the sea, where they struggled against the waves.  The audience was ecstatic. 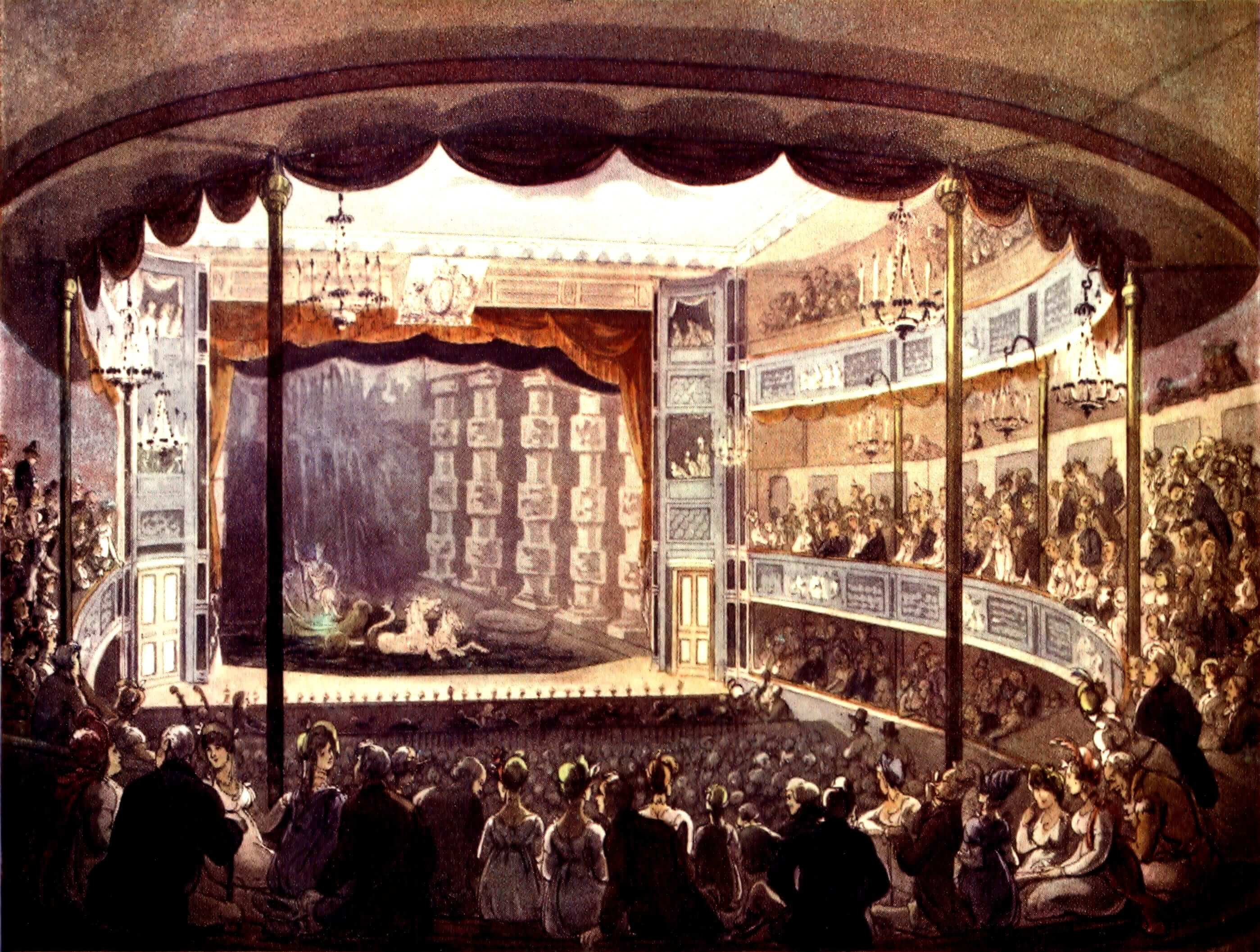 A performance at Sadler’s Wells c.1808.  Aquatint with figures drawn by Thomas Rowlandson and architecture by Augustus Charles Pugin in Rudolph Ackermann Microcosm of London volume 3 (1810).

A bewildering range of other spectacles followed.  Some were pretty obvious crowd-pleasers, such as The Rival Patriots, or the Battle of Trafalgar, which satisfied a thirst for patriotic set-pieces, even when the victories they were celebrating were fast receding into the past.  Others, such as The Invisible Ring, or Water Monster and Fire Spectre, and The White Witch, or the Cataract of Amazonia, were designed to inject variety into the repertoire.  Obviously there was only so much naval warfare London audiences could take.

Although Dibdin’s aquatic dramas were a huge success, it was not all plain sailing, as it were.  One night a sailor in the gallery, wanting to see if there really was water in the tank, slid down the pillars on to the stage, and dived in.  He surfaced, Dibdin recorded in his memoirs, “with the elegant lingo peculiar to the unreflecting Sons of Neptune”, and in doing so caused such a stir in the newspapers that the theatre had to put up with a week or so of repeat performances by annoying imitators.  Other spectators took the suspension of disbelief too far.  An 1807 drama, The Ocean Fiend, or the Infant’s Peril, had an infant thrown into the water from a bridge and saved from drowning by a Newfoundland dog.  The infant on the bridge was in fact a life-size doll, and the infant in the water was a four-year-old girl, a “precociously talented” stunt artist.  But it all went wrong when a member of the audience, clearly not a seasoned theatre-goer, leapt up and cried out “O d — it, they’ve thrown the child into the water!”

ENTERTAINING THE CROWDS
And so it’s easy to imagine what the man from Sadler’s Wells—an agent of sorts, we must assume—had in mind.  Interestingly, a few years later, the Aquatic Theatre did in fact succeed in securing Inuit performers, and their story sheds some light on what is was the London agent must have proposed to Sackhouse.

They were billed as a family of three, a husband and wife and their ten-month-old son Erelow.  But it was a fiction, for the two adults—George Niakungitok and Mary Coonahnik—were not married.  A Captain Hadlock, master of a whaling vessel, the Five Brothers, had taken them on board at Greedy Harbor on the Labrador coast, having paid Niakungitok’s mother in foodstuffs for the “use” of her son.  And so the Inuits left their village of Hopedale to put on displays in Philadelphia and New York, where it was revealed by Niles’ Weekly Register that “these poor creatures, strangers to each other, had been feloniously kidnapped, and, by threats, compelled to exhibit themselves”.  Hadlock was sent to prison, but, on his release, he brought Niakungitok and Coonahnik to London.  The child by now had died. 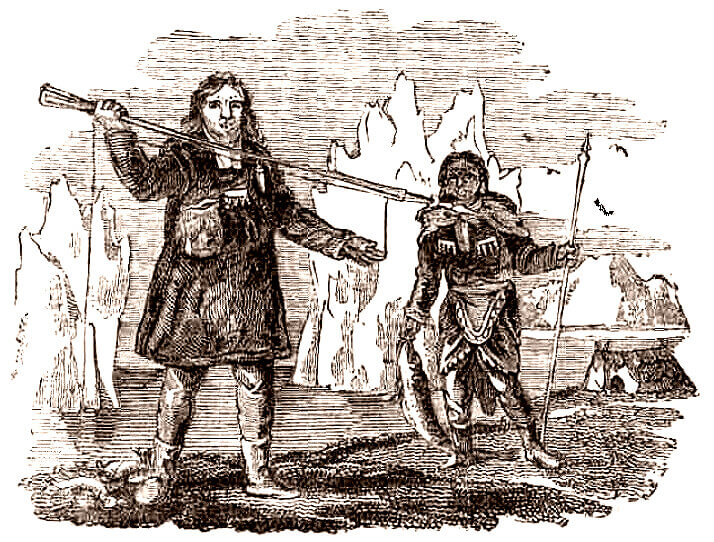 Niakungitok and Coonahnik at the Egyptian Hall in Piccadilly.  Image in The Mirror of Literature, Amusement, and Instruction volume 1 (1823).

In May 1823 The Mirror of Literature ran an article on Niakungitok and Coonahnik, who at the time were on show at the Egyptian Hall in Piccadilly, where by all accounts they were the talk of the town.  Why the interest?  The Mirror suggested that Londoners were astonished by the Inuit people’s capacity for survival, by their reliance on a diet of raw meat and fish, by their kayaks and seal-skin clothing, by their skill with the harpoon.  A drawing of the couple accompanied the article—a bit crude, and certainly not as graceful as the two coloured lithographs that can be seen in the museum of the Scott Polar Research Institute in Cambridge.  (Click here to see the lithographs of Niakungitok and Coonahnik respectively.)

AND AFTER?
Niakungitok and Coonahnik enjoyed only a brief career in London, and there can be no doubt that they were regarded, patronisingly, as exotic outsiders.  It cannot have been a particularly pleasant experience, and it is a fair guess that a similar fate would have befallen John Sackhouse.  A genuine native of the desolate north, paddling his kayak in a London theatre—that really would have given the Sadler’s Wells crowd something to gawp at.

This, though, did not happen.  How so?  Well, I refer you once again to my earlier post, where the rest of John Sackhouse’s story—post-Deptford—is told.

SOURCES
A detailed history of the Aquatic Theatre at Sadler’s Wells is given by Charles Dibdin in his Professional and Literary Memoirs (ed. George Speaight 1956).  My other principal sources were contemporary newspapers.