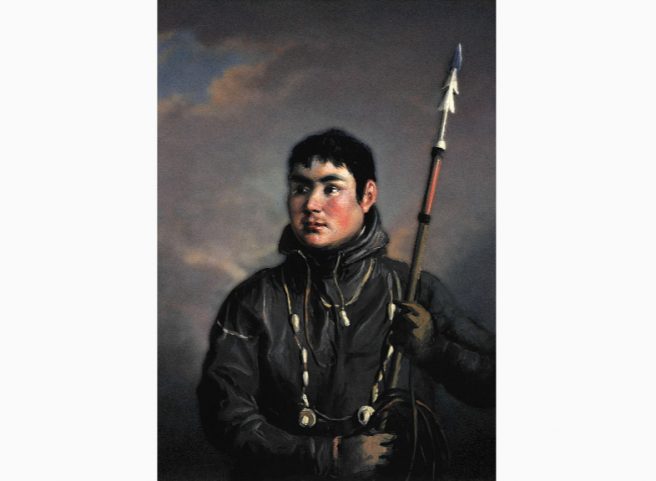 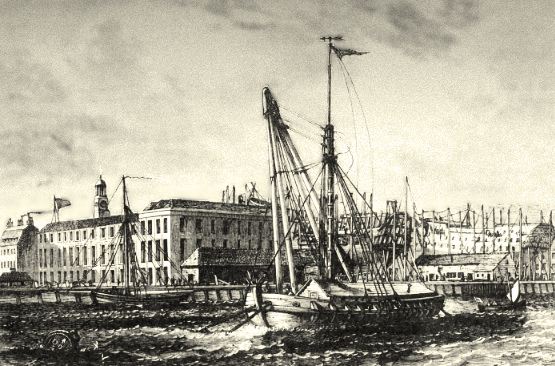 The docks at Deptford.  From Edward Walford Old and New London volume 6 page 151.

If you read our post on Valentine’s Day postmen, you will see a connection with this next item in the rather sad twist at the end!

We start, though, on a chilly Saturday late in March 1818.  Although the temperature in London would not rise above 47oF, a large crowd had gathered in the Royal Dockyard in Deptford.  Moored to the quays were four vessels, the Isabella, the Alexander, the Dorothea and the Trent.  They were being fitted out for the voyage to desolate arctic latitudes—the Northern Expedition—that would be led by Captain John Ross.  Bigwigs from the Admiralty were “received with the usual honours”—as reported by the newspapers—“and proceeded to inspect the equipment of the vessels in every part”.

Later that day the naval gentlemen returned to London.  They had seen everything they wanted to see: the arrangements for keeping the crew safe and warm, the ice-boats designed to cope with frozen seas, the fishing gear stowed on board for the purpose of catching whales.  They had also been treated to a curious spectacle.  For a little kayaker had paddled into view.  The crowd had rushed to the quayside to get a good view of him.

The kayaker was an Inuit.  He was called John Sackhouse—that at least was his Europeanised name—and he hailed from Greenland.  He was also something of a celebrity.

FROM GREENLAND TO SCOTLAND
Sackhouse had come to these shores in the autumn of 1816 on board a Scottish whaling vessel, the Thomas & Ann.  The hunting season was over, and the whaler had a rich haul of blubber for her owners, Messrs Wood, Weddell and Co. of Leith on the east coast of Scotland.  As she was pulling away from Davis Strait, which lies between Greenland and Baffin Island, the Greenlander presented himself to the captain of the ship.  He was nineteen years old, five feet six inches in height, and muscular in build.  When it turned out that he had a kayak with him, the captain, whose name was John Newton, asked the crew if they had saved him from the rough waters.  Eventually, though, it emerged that Sackhouse was a stowaway.  He had come on board before the ship had sailed from port and had befriended the crew, and they had agreed to hide him from sight until they were well out to sea.

Having arrived in Leith, and needing to support himself, Sackhouse began to put on aquatic exhibitions, advertised by means of hand-bills.  He could hit a ship’s biscuit bobbing on the waves with his sealer’s spear from thirty yards, and hoist his kayak over a floating timber with his paddle.  These displays were enormously popular.  Men and boys clambered on to the roofs of houses along the harbour, or monkeyed up the rigging of ships, and women in elegant dresses put out into the harbour in little boats, which from time to time had to pick up half-drowned spectators pitched into the sea by the jostling on the pier.  Strangers approached an increasingly exasperated Captain Newton on his ship where it was moored in the harbour, and even at his home, for a sight of the renowned John Sackhouse. 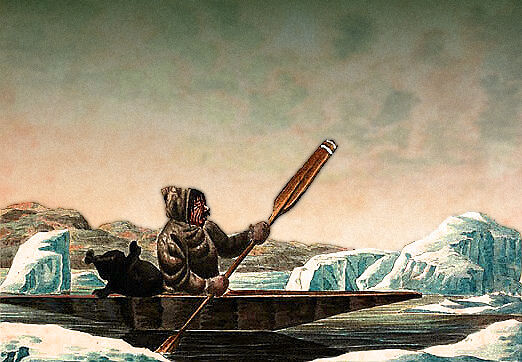 He was prodigiously strong, and one afternoon in September 1816 he outpaced a six-oared whaleboat in a race from the harbour round the island of Inchkeith in the Firth of Forth, completing the ten-mile course in a mere sixteen minutes.  Afterwards his craft was put on public show at the wet dock, along with Inuit artefacts: two sea-unicorn’s horns, the skulls of a sea-horse and bear, the ear of a whale, the preserved skin of black eagle.  Sackhouse then demonstrated his kayaking skills for nearly an hour, astonishing the spectators by turning turtle, and then righting himself again, a technique essential for survival in his native waters.  A reporter for The Bury and Norwich Post observed rather lyrically that the manoeuvre would have enabled Sackhouse to “preserve himself, like a sea fowl, amidst the most tempestuous weather.”

He cut a curious figure in his jacket and trousers of undressed seal skins, with only his face and hands exposed to the waters sloshing around him.  His kayak, which was fifteen feet long, and weighed only sixteen pounds, was also made entirely of seal skins.  It was pointed at both ends, and a newspaper reporter observed that it was “like one of the small boats on the Thames, commonly called funnies.”  The skins around the opening through which Sackhouse seated himself were fastened to his body with a belt made of a whale’s entrails, and, as another reporter pointed out, thanks to this draw-string, which was “like the mouth of a purse”, he could not fall out.

As time went by Sackhouse’s reputation spread to the city at large.  He sat for portrait painters more than once, and he went to the theatre.  Although at first he could only talk in his mother tongue, which The Caledonian Mercury described as “a species of whispering”, he attempted to learn English.  The Morning Post would claim rather unkindly that even after two years he could say little more than “Give me all the fat; I love fine fat.  Give me fine port wine”.  By “port wine” Sackhouse meant oil, which allowed the Post to make another pointed remark, namely that wine was his favourite drink.  Even so, as we shall see, drink is not entirely absent from the story! 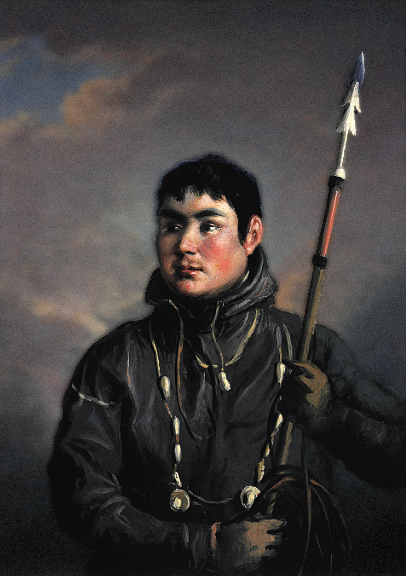 AND FROM SCOTLAND TO LONDON
In the winter of 1817 a chance encounter with the artist Alexander Nasmyth took Sackhouse from Leith to Edinburgh.  Nasmyth taught his protégé to draw, and he painted him dressed in thick oil skins and clutching a harpoon.  Being powerfully connected, Nasmyth was able to recommend Sackhouse to the Royal Society of Edinburgh and subsequently to the Admiralty Board in London as an interpreter.  And it was in the course of preparations for the 1818 expedition that the events with which we began—the display in the Royal Dockyard at Deptford—took place.

This was the third time Sackhouse had exhibited on the Thames.  In fact he almost came a cropper, when, in the words of one of Ross’s officers, “poor John, anxious the crowd to please, approached too near the shore, and in turning the turtle, stuck his head fast in the mud, as the quivering bottom of the canoe plainly indicated”.  A “jolly marine … dashed boldly through thick and thin” to rescue the stranded Sackhouse.

Two days later, though, on Monday the 30th of March, something rather remarkable happened.  Another deputation, which included the Foreign Secretary—Lord Castlereagh—and the Bishops of Oxford and Winchester, had arrived in Deptford.  Ten thousand spectators had assembled on the decks of ships in Deptford Basin, waiting for the advertised display—which never happened.  The reason behind Sackhouse’s mysterious failure to appear in his kayak will be the subject of a later post—which can be found by clicking here—but suffice it to say here that this intriguing affair involved a man from London, a low dock-side tavern, and the promise of filthy lucre.

Anyway, the upshot was that Sackhouse, now thoroughly intoxicated, returned to the Isabella, where he announced that he was seriously considering abandoning the expedition.  Captain Ross and his fellow officers were rattled, fearing that they would lose their Inuit interpreter.  Even so, after remonstrating with Sackhouse, they left it to him to make up his own mind.  Wednesday arrived, with a sharp wind blowing from the north east, and Sackhouse relented.  He apologised for his short-lived change of coat, and stayed firmly on board.  And the Admiralty, anxious to keep temptation at bay, ordered that no stranger must go near Sackhouse, although an exception was made for two artists, who went on board to take his likeness.

BUT TO GREENLAND NO MORE
The expedition finally got under way on the 18th of April.  And although Ross failed in its stated objectives—principally to find the elusive North West Passage—Sackhouse’s value as an interpreter did not go unnoticed.  The Admiralty had its eye firmly on future outings, and so, when Sackhouse returned to England later that year, it set about having him properly educated.  But in the end, growing tired of London, he returned to his friends in Edinburgh.  They would remember him as a gentle and obliging fellow, thankful for the kindnesses shown to him, and sensitive to the feelings of others.  On one occasion he met two children lost in the snow: he gave them his jacket and saw them safely home.  But even his tough Greenlander’s constitution could not withstand European diseases, and on the evening of Valentine’s Day in 1819 he died of typhoid fever.  He was only twenty-two.

Over the years Sackhouse had taken an interest in Christian beliefs, and it is said that he died clutching an Icelandic catechism, which he only dropped when at the very end his strength and sight failed him.  In his final delirium he seemed to see his long-lost sister calling to him from his native Greenland. She was begging him to return home—which of course he never would.