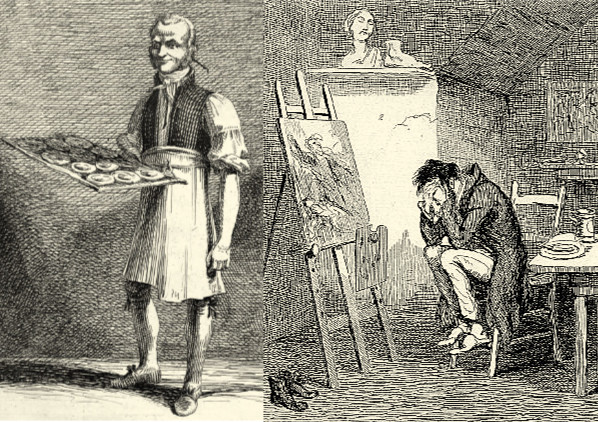 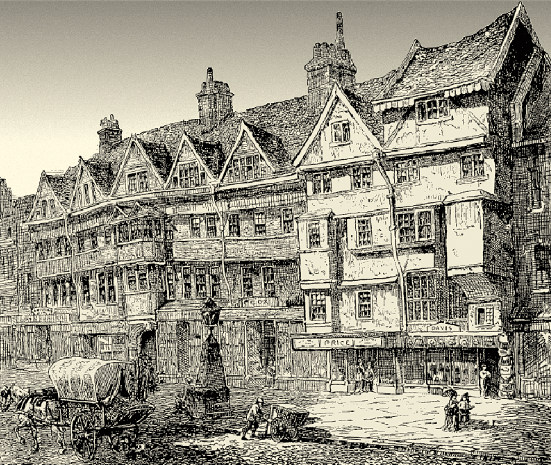 If you read our recent piece on Joseph Freeman and Thomas Williams, who stole a silk handkerchief belonging to one Robert Campbell Mallett, and were transported for their pains, you will no doubt have come away with a vivid impression of the area of London in which the two pickpockets operated.  That area was Holborn.  As well as affording rich pickings for the light-fingered, Holborn brought out the best and the worst in the writers of the day.  A now forgotten novel described it as noisy and murky and sloppy!

One of the more unusual sights in the streets of Holborn was a fellow by the name of Stokes.  Peter Stokes, to be precise.  He was a pieman, and, in case you are wondering why that would have been unusual, I should add that he was none other than The Flying Pieman—yes, Flying—of Fetter Lane.  And that, as I am sure you will agree, must be worth a story.

BUY BUY BUY
Henry Mayhew in London Labour and the London Poor tells us that the pieman was one of the longest standing of the capital’s street traders.  He catered for a range of tastes, selling meat pies made with beef or mutton, fish pies made with eels, and fruit pies made with just about anything that was in season.  But at the time Mayhew was writing, in the middle of the nineteenth century, the days of the pieman were numbered.  The itinerant trader, hawking his wares on foot, had been largely ousted from the streets by fast-food shops. 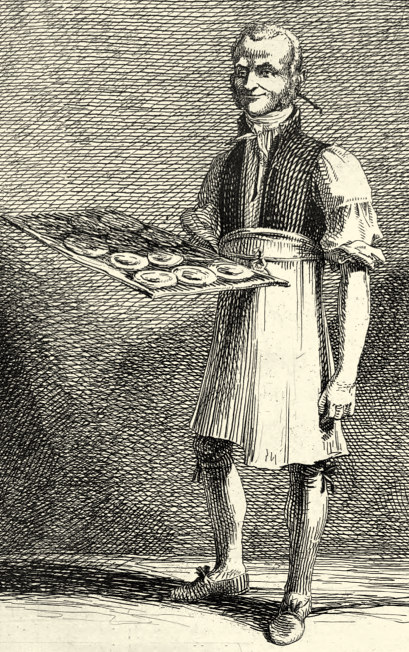 However, Peter Stokes was of an older generation.  Although we do not know his exact dates, it is likely that he lived in the early years of the nineteenth century.  We have a wonderful description of him from the pen of William Harvey, who under the name “Aleph” published anecdotes of old London curiosities in The City Press, a weekly newspaper that started up in the 1850s but has long since disappeared.  Stokes, we are told, was

a slim, active, middle-sized man, probably about forty years old.  He always wore a black suit, scrupulously brushed, dress coat and vest, knee breeches, stout black silk stockings, and shoes with steel buckles—then rather fashionable.  His shirt, remarkably well got up, had a wide frill, surmounted by a spotless white cravat.  He never wore either hat or cap; his hair, cropped very close, was plentifully powdered; and he was decorated with a delicate lawn apron which hardly reached to his knees.

What gives this delightful pen sketch its unmistakable air of authenticity is the fact that “Aleph” had known Stokes as a boy.  He would see him on Holborn Hill, selling, rather surprisingly, not pies but smoking-hot plum pudding.  He was obviously rather taken by the pieman, and he remembered that

his countenance was open and agreeable, expressive of intellect and moral excellence. 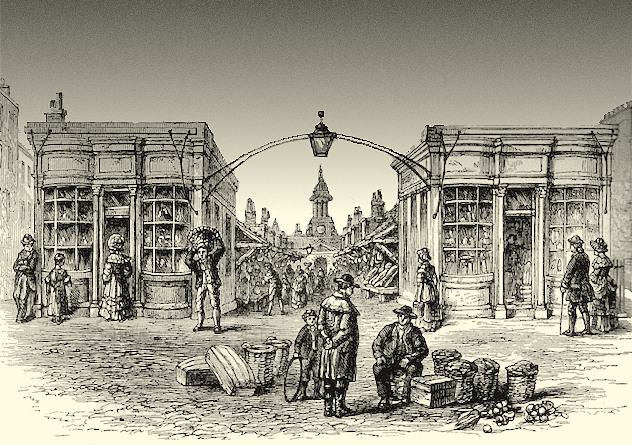 And the flying?  Well, Peter Stokes flew here, there and everywhere, with a small round tray of pudding in his right hand, and a broad-bladed glittering spatula in his left hand.  He would zip from one Holborn street to another—from Fetter Lane to Ely Place and from Ely Place to Thavies Inn and from Thavies Inn to Field Lane—stopping only to hand over a slice of pudding in exchange for a customer’s penny.  If the penny was not ready to be taken, Stokes would be off down the street, leaving his peckish customer to scrabble about, now pointlessly, in the recesses of his pockets.

The scrupulously observant “Aleph” recorded some interesting statistics.  Each pudding was about three inches thick.  Stokes would cut it into twelve slices, and he was so swift an operator that he could sell all twelve between Hatton Garden and Fleet Market, before nipping out of sight to collect another pudding.  He worked tirelessly from noon till four in the afternoon—as measured by the sound of the clock of the church of St Andrew Holborn—and in that time he was capable of selling fifty rounds of pudding.  His street cry—a rather unoriginal “Buy, buy, buy”—could be heard several streets away.  So energetic was the Flying Pieman that he would be crying his cry even as he was dashing off to recharge an empty tray.  Predictably, he was a perfect menace to traffic, weaving between the carts and the coaches to get from one side of the street to the other.

A SECRET SORROW
But Stokes was something of an enigma.  Had he worn a cap he probably would not have doffed it to any man or woman, and the story goes that a well-heeled widow, on paying double the asking price for a slice of pudding, was shown a clean pair of heels rather than the anticipated display of fawning gratitude.  He was happy to work on a foggy winter’s morning—hot plum pudding was very popular in cold weather—but on a rainy day Holborn could not buy his cheering confectionary for love nor money.  Most intriguingly, from time to time

a solemn, cogitative expression stole over his features, and the redness and moisture of his eyelids indicated the presence of tears.

And though the clouds would lift soon enough, and the usual “glow of satisfied industry” would return quickly to light up his face, the question of a secret sorrow never went away.  And it is to just such a question that we will turn.  In due course, naturally. 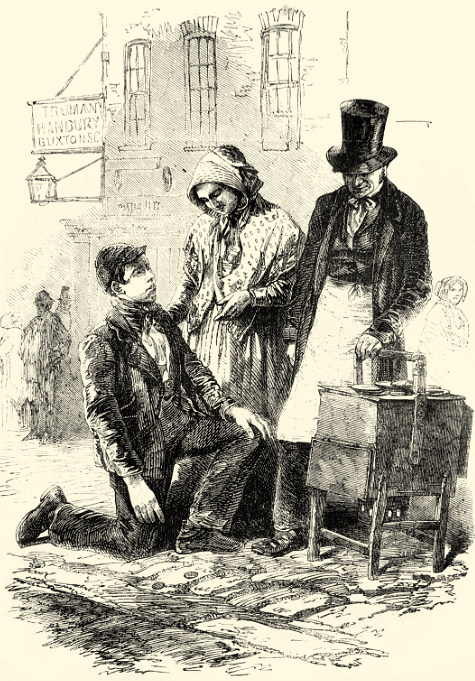 A coster boy gambling with a pieman.  Image in Henry Mayhew London Labour and the London Poor volume 1 (1861) between pages 204 and 205.

INFERIOR GOODS
As noted above, the survival of the pedestrian pieman was threatened by the rise of the fast-food establishments that Mayhew identified as the penny pie-shops.  The lone hawker could not compete in a newly crowded market, and, although he was charging no more than the shop, he was giving the customer less pie for his penny.

We are now talking about real pies—not plum pudding—and we can imagine that the trade in these was not wholly innocent of sharp practice.  One traditional street seller, clearly angered by the decline in profits, hit out at the shops in the Tottenham Court Road.  He told Mayhew that their pies were full of pepper—“I bought one there the other day, and it nearly took the skin off my mouth”—the aggressive seasoning masking the tell-tale flavour of inferior fillings.

Grumble as they might about the fast-food shops, the piemen themselves did not enjoy an entirely wholesome reputation.  They were in the habit of playing a coin-tossing game with customers, pocketing the penny if they won, and handing over a pie free of charge if they lost.  As working-class boys were easy targets for the street sellers, the practice did little for their image.  The police, in particular, took a very dim view, and in 1829 a Marylebone magistrate, sitting in judgement over just such an offender, protested with impressive rhetorical skill that “as soon as children came out of their petticoats, they were taught gambling, which was the first step to thieving”. 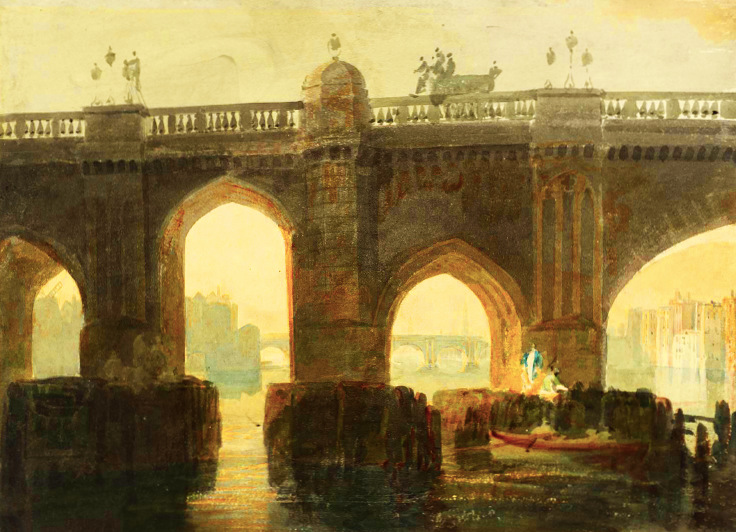 The outrageous behaviour of a pieman who found himself in the Mansion House Police Court in the late summer of 1829 could not possibly have helped.  He was accused before the Lord Mayor of stealing the hat of a poor deaf and dumb boy, having encountered his victim asleep in an alcove on London Bridge.  In court the arresting officer bore witness to the power of the pieman’s voice, which, no doubt given great strength by constant crying, went “through his brains like a sword”.  The Lord Mayor was obliged to release the prisoner, as the theft had not actually been witnessed, but at least he had the satisfaction of putting it on record that the wretch’s wares were well and truly past their sell-by date.  “The pies were detained,” reported the Morning Advertiser with barely concealed amusement, “but the pieman was discharged.”

THE DAY JOB
But to return to Peter Stokes.  What was his secret sorrow?  Well, legend has it that he was in fact a portrait painter.  But he married young, and, although he appears to have had little difficulty in producing children, he had immense difficulty in securing sitters.  Five years into his marriage his prospects had not improved, and his family were living off scraps. 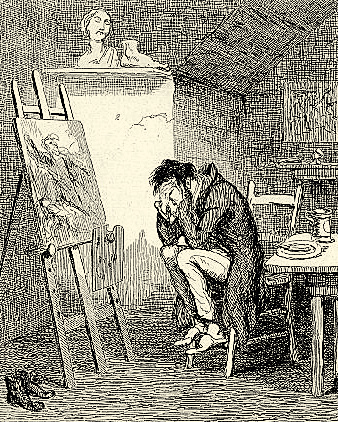 A hungry artist sitting in despair, with an empty plate on the table.  Etching by George Cruickshank dated 1846.  © British Museum

One day, unable to bear the sight of hungry children, he took one of his paintings to a pawnshop, and on his way home he ran across a boy at a street corner doing a brisk trade selling baked potatoes.  In a Damascene moment he realised not only that street vending might be his way out of poverty, but also that having an unlikely other calling might give him an odd sort of cachet.

And so it came about that Peter Stokes, pieman and painter, would fly about Holborn in the afternoon, and paint in the morning and evening.  His long-suffering wife, toiling in a cellar in Fetter Lane, made the plum puddings that were the secret of his commercial success, but her reward was a prosperity she and her family had never known before.  She even acquired a gold watch, with which she cut quite a dash.

No doubt the sadness that occasionally came over the Flying Pieman, as described above, was for the dream that never quite came true.  For although he prospered as a painter—and moved his family to decent lodgings off Oxford Street in Rathbone Place—he had failed to live by his brushes alone.  We understand his regret, but he is not alone, and there have always been Peter Stokses, yearning for artistic freedom while hanging on, grimly, to the day job.

Fully Figged and Fleet of Foot, or, Giving the Duke a Bloody Nose