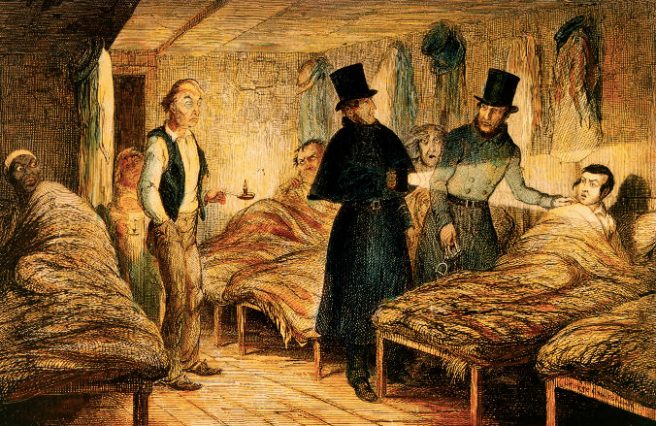 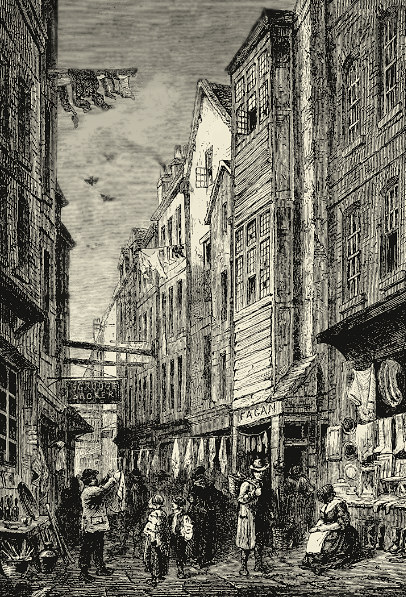 The name of George Bradshaw is forever linked with the railway guides that were at one time in every traveller’s pocket.  In fact the publishing company founded by Bradshaw spread its net far wider than timetables, and among the many titles that came out under its patronage was a rather splendid handbook to London, which first appeared in 1880, price one shilling.  The author was one Herbert Fry, and along with many other gems he penned a fascinating brief description of Field Lane in Holborn.

Field Lane was of course made famous by Dickens as the “narrow and dismal alley” that led up from Holborn Hill towards Saffron Hill, its shops festooned with the silk handkerchiefs supplied to the traders by pickpockets.  Narrow and dismal it may have been, but Field Lane

has its barber, its coffee-shop, its beer-shop, and its fried-fish warehouse.  It is a commercial colony of itself: the emporium of petty larceny: visited at early morning, and setting-in of dusk, by silent merchants, who traffic in dark back-parlours, and who go as strangely as they come.  Here, the clothesman, the shoe-vamper, and the rag-merchant, display their goods, as sign-boards to the petty thief; here, stores of old iron and bones, and heaps of mildewy fragments of woollen-stuff and linen, rust and rot in the grimy cellars.

Well, Fry scarcely recognised Dickens’s Field Lane.  More than forty years had passed, and the tenements were being swept away.  The whole neighbourhood was coming up in the world—it could hardly go down—and the pickpockets had departed long ago.  But the memory of them lingered still, and Fry had an intriguing anecdote up his sleeve:

It used to be asserted of this quarter of London, that if a gentleman in the Strand or the West-end lost his pocket-handkerchief and wished to recover it, he need but take a walk to Field Lane or Saffron Hill and there, about an hour or so after it had been picked from his pocket, he would be pretty sure to find it already washed and ironed, with his name erased, hanging with a hundred others of divers qualities and colours, outside one of the twenty shops for the sale of such articles then to be found here.

So was the real Field Lane ever the den of thieves that Dickens—and later Fry—would have us believe it had once been?  London Overlooked has been investigating.  And there can be few better guides to this notorious corner of the Victorian capital—pace the esteemed Mr Fry—than a potted history of one of its more notable residents.  He was Thomas Greenham.  No doubt he was know to his friends and his family as plain “Thomas”, or “Tom”, or even “Tommy”.  But to the rest of the world—and above all to the citizens of Holborn—he was Police Constable Greenham.  He was, as the saying goes, a bobby on the beat. 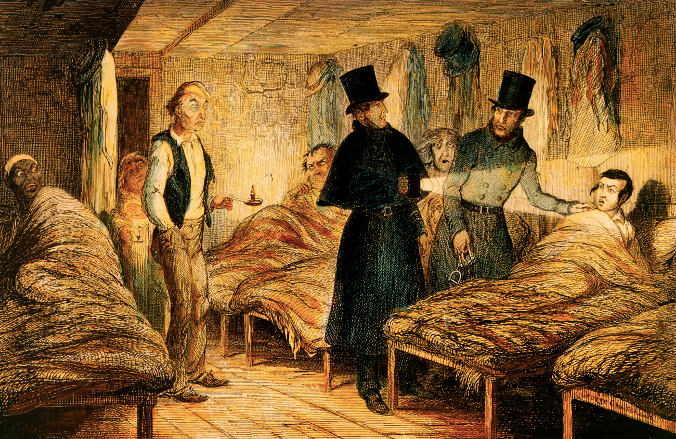 HIS HAT!  HIS HAT!
Greenham’s career as a guardian of the peace was certainly challenging.  His name crops up in contemporary records, and from these it is possible to ascertain that he was frequently called upon to deal with street crime, often involving the theft of a handkerchief.  He would have gone about his duties dressed in a long blue swallow-tailed coat—fitted with a raised leather collar as protection against garrotting—and sporting the distinctive stove pipe hat that marked the “peeler” out from the crowd.  He would have been armed only with a rattle, used to summon fellow constables, and a truncheon, used in ways it would be tasteless to describe here.

These men were not exactly popular.  They were regarded as a threat to civil liberties, and were regularly insulted. Some called them “raw lobsters”, others “blue devils”, in reference to the colour of their uniforms.  They were liable to be assaulted, and we hear of constables suffering terrible injuries at the hands—literally—of a suspicious public. Indeed Thomas Greenham was one such victim of attack in the line of duty.  In the summer of 1840 he was set upon by two young men, Joseph Freeman and Thomas Williams, whom, as we shall see in due course, he was trying to apprehend.  Having been knocked about by his assailants, Greenham was robbed of his constable’s hat.  The hat, which was worth three shillings, disappeared into a crowd of bystanders, and was never seen again.  In it had been a handkerchief worth three shillings and sixpence, which also vanished into thin air.

Greenham’s stove pipe hat was more than a trophy.  The two roughs were particularly keen to get hold of it—“Take the b—r’s hat off!” Freeman had shouted to Williams—and no doubt it was a scalp of sorts.  More to the point, Greenham was now more vulnerable, for the hat afforded a degree of protection against blows to the head.  Some bobbies even used their headgear as makeshift pedestals, perched on which they might peer over a wall to see who was doing what on the other side.  One way or another, stealing a policeman’s hat was, and probably still is, a popular sport.  At this point aficionados of P G Wodehouse will no doubt recall the affair of Constable Oates and Harold “Stinker” Pinker. 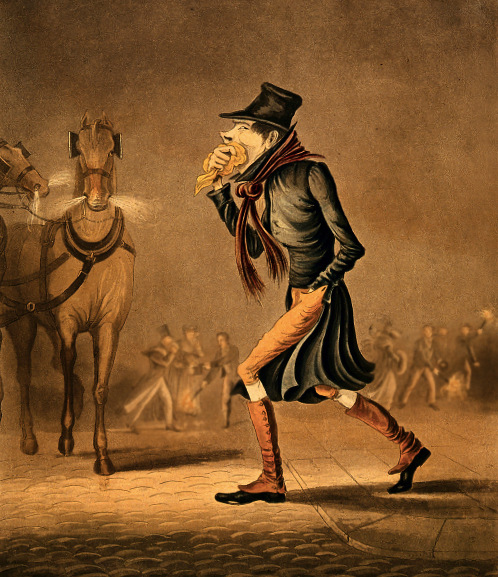 A man covering his mouth with a handkerchief, walking through a smoggy London street.  Coloured aquatint dated 1802.  Credit: Wellcome Collection  CC BY

MY HANDKERCHIEF!  MY HANDKERCHIEF!
But let us go back to the beginning.  And the story begins properly with another handkerchief—a white handkerchief, to be exact—although at a value of only two shillings it was presumably not as fancy as the one Greenham carried in his hat.  The setting, let me remind you, is Holborn.

What was Holborn like?  Squalid, according to Peter Cunningham, who, like Herbert Fry, published a handbook to London.  In a similar vein the Poor Man’s Guardian deplored the state of its wretchedly crowded lodging houses, which were cramped and unwholesome.  And the author George Henry Lewes came up with a richly rhetorical description—“noisy, murky, and sloppy”—which he inserted into the second sentence of his 1847 novel Ranthorpe.  One assumes that his first sentence, to wit, “It was a cold November night”, cost Lewes considerably less creative effort.

Anyway, between ten and ten-thirty on the night of the 6th of July 1840, a fellow by the name of Robert Campbell Mallett was making his way up Holborn Hill.  We know very little about Mallett, other than that he was about twenty-five years old, and was missing his right arm.  His father was a shipwright who lived in Deptford, but how he himself made a living is a mystery, although it is an interesting fact—and a nice irony in view of what is going to happen to him in the next paragraph—that a year later he was tried at the Old Bailey on a charge of larceny.  Happily—because we are on his side in what follows—he was acquitted.

So.  Mallett was on the point of turning down Shoe Lane, where he lived, when he felt his two-shilling handkerchief being pulled out of his pocket.  “My handkerchief is gone!” he exclaimed.  “Stop thief!”  At that moment a figure wearing a brown coat passed him on the right, and, had he not been one-armed, Mallett would have grabbed hold of him.  The brown-coated figure had two accomplices, and they all scarpered.  Two of the three were Freeman and Williams.  The third was never identified.

Showing a clean pair of heels, Joseph Freeman disappeared into Union Court, on the north side of Holborn Hill, where a narrow passage crawled between beetling tenements.  Mallett followed him into the menacing shadows, but, confronted by a hostile mob, he lost his nerve, and let his quarry get away. 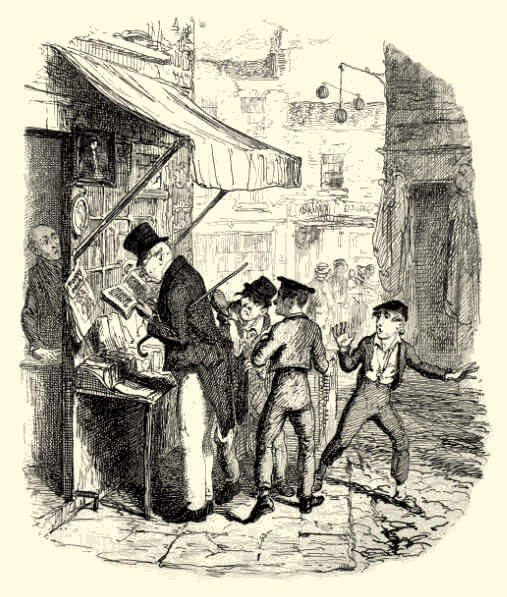 LEAVE THE OTHER TO ME
At the time of the incident Police Constable Thomas Greenham was standing opposite Shoe Lane.  He spotted two details.  One was a pair of young pickpockets—Freeman and Williams—with whom he had previously had dealings of a professional nature.  The other was a white handkerchief.  The handkerchief was being spirited away by one of the two lads—Greenham thought Williams—and it was obvious to the peeler that the lad in question was not its rightful owner.

While Mallett went after Freeman, Greenham went after Williams.  At some point the white handkerchief changed hands, and, as Williams had run off in the direction of Field Lane, it is easy to infer that he deposited it with one of the many “fences” who operated in the area.  In this way he hoped to get rid of the incriminating evidence.  He then dashed off again, and crossed to the south side of Holborn Hill, but with Greenham on his tail he was overtaken in Brewer’s Yard in Smithfield.

SHOWDOWN IN BREWER’S YARD
The scene in Brewer’s Yard is blurry to say the least.  A crowd had gathered, as it were spectators at the ringside.  One witness, a house painter by the name of George Higgins, insisted that Greenham waited for reinforcements, and that when two or three fellow constables arrived he finally made his move.  “He made a grab at anybody he could lay hold of,” Higgins said.

Greenham remembered it differently.  When he went after Williams he lost sight of Freeman.  “But he afterwards came and rescued Williams,” he said, referring to the encounter in Brewer’s Yard, “with the assistance of others.” These others were so intimidating that Greenham screamed “Murder!” over and over, and whirled his rattle.  Clearly one man’s crowd of idle bystanders is another man’s mob of heavies.

And after?  Greenham surfaces from time to time in the records, blighting the careers of pickpockets.  His was not an easy life—he claimed that he had “never been well” since the scuffle in Brewer’s Yard—but we should perhaps spare a thought for Freeman and Williams as well.  Both were in their early twenties, but age could not have carried much weight, for when their case came up at the Old Bailey they were duly found guilty.  They were transported for ten years, which by any yardstick is a heavy price to pay for a bobby’s hat and a couple of handkerchiefs.