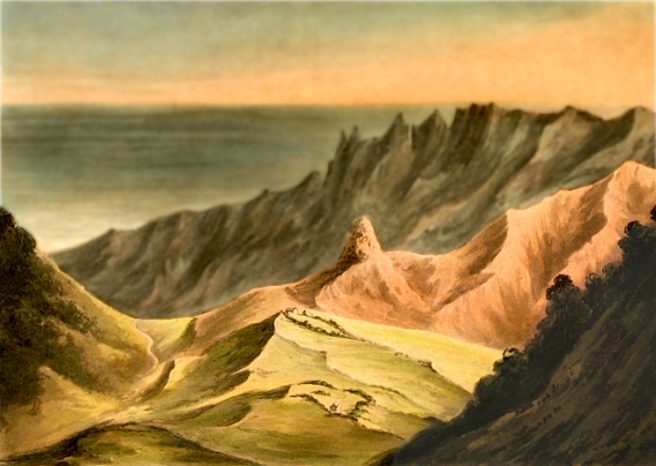 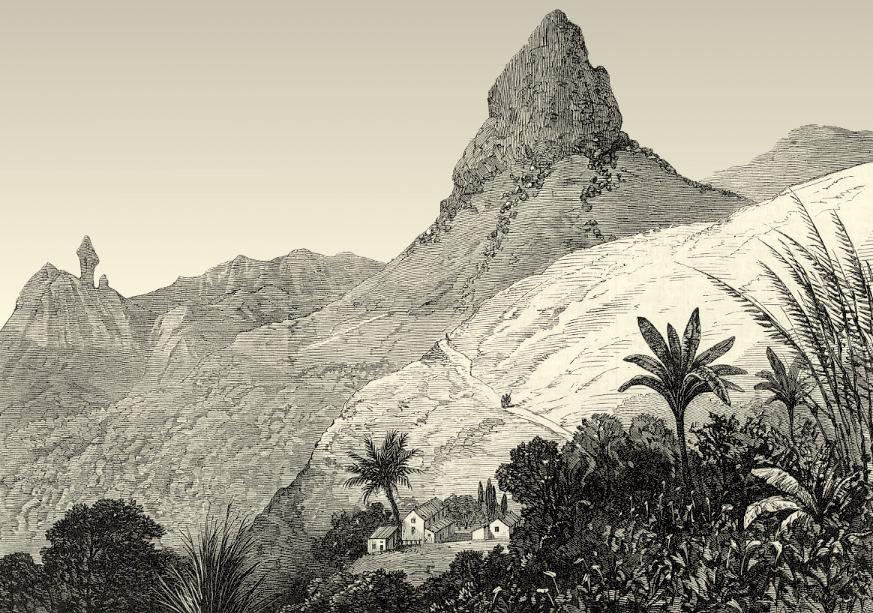 View of the interior of Saint Helena.  Image in The Illustrated London News 5 January 1878.

If you read the first part of this story, which we published here last week, you will remember that in January 1848 an unpleasant incident occurred at the Whitechapel workhouse involving a woman by the name of Margaret Layton.  Margaret, who was of African heritage, had come to England from Saint Helena, where she had once been enslaved.  She had married an English soldier, William Layton, and she had borne him four children.

On William’s discharge from the army he and Margaret had left Saint Helena, and had settled in London, finding accommodation in cheap lodgings.  But their lives were hard, and William, who had trained as a copperplate engraver and printer before enlisting, struggled to find work.  They could not feed their family, and there was little prospect that their circumstances would improve at any time soon.

The Laytons were desperate.  The parish was in a position to help, in principle, but when Margaret appeared at the gate of the workhouse she received an unfriendly reception from two of its officers, whose names were John Findlater and John Waterman.  Findlater was in his forties, and Waterman in his sixties.  The younger man was the relieving overseer of the Whitechapel Union, and his older colleague was the workhouse gatekeeper.  And they were about to make life even more difficult for Margaret than it already was.

COLD AND HUNGRY
The incident at the workhouse took place on the 11th of January—a Tuesday—but this was not the first visit Margaret had made.  She had already applied to the parish for relief, which might have taken the form of money or food or clothing, and, although she had received meagre handouts for a while, these had now dried up.  For six weeks she had been given no assistance at all.  The purpose of her visit was to ask that a new application might go before the board of guardians for their consideration and approval.

A scene in Spitalfields, where the Laytons were living at the time of the 1841 census.  Image in The Illustrated London News 6 April 1844.

One can well imagine that applying for parish relief was an ordeal.  Applicants had to submit to being questioned by workhouse officials, and so, as well as suffering hardship and poverty, they were compelled to reveal their circumstances and the extent of their need.  In a sense, then, they were punished twice.  In addition to undergoing these probing examinations, they would have to accept the humiliating necessity to acknowledge their utter dependence on a public institution.

But a woman in Margaret’s position—the mother of a young family—had no choice but to throw herself on the mercy of the parish.  And London was in the grip of a cruel winter.  For several days the city had been wrapped in cloud and lashed by rain.  Only the week before, in Deptford, a destitute man by the name of William Sturges Nichols had died of starvation and exposure to the cold.  There were those who said that he had been turned out of the workhouse in September, after which he had tried to survive on a weekly allowance of one shilling and a loaf of bread.

BE KIND ENOUGH
When Margaret arrived outside the workhouse she encountered John Waterman, the gatekeeper, who took her across the site to the relieving offices.  Passing through the centre of the Charles Street block, which was five storeys high, and housed committee rooms and male and female wards, they headed towards the rear block, which was six storeys high, and to the southern corner along Thomas Street, where the offices adjoined more male wards to the north and the dispensary to the west.  Beyond this block, extending along the eastern side of the site, was an imbecile ward, where the unhappiest of the inmates were sent. 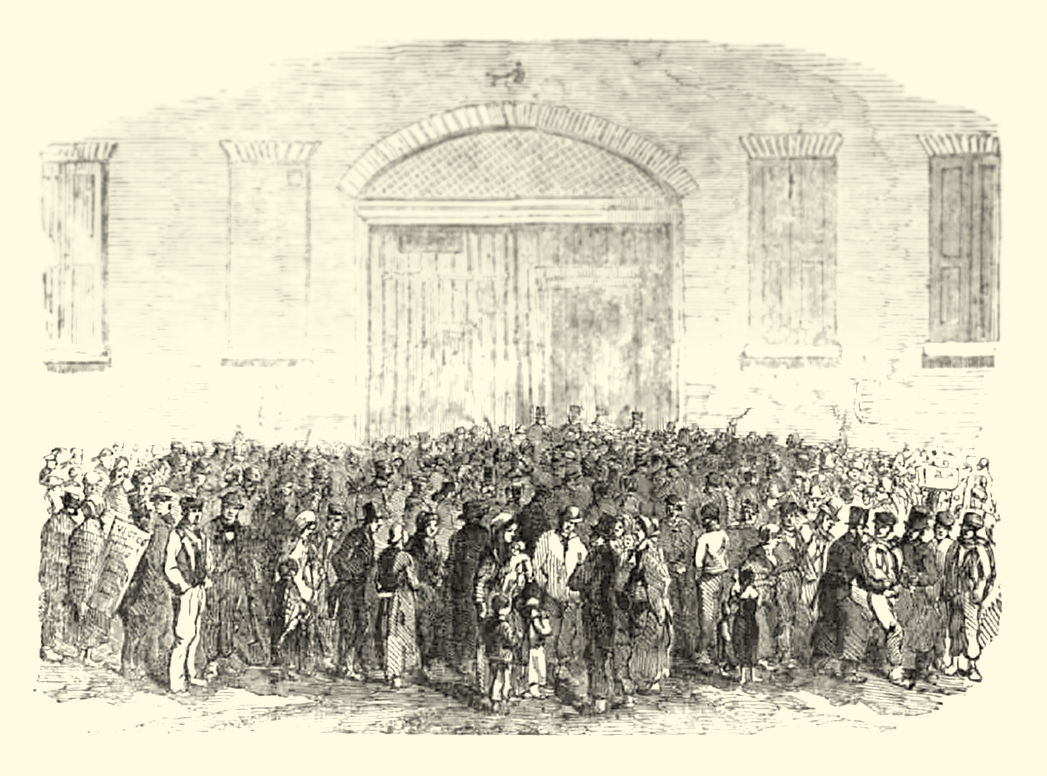 A crowd of unemployed workers assembles outside the Whitechapel workhouse.  Image in The Illustrated London News 3 March 1855.

When they were inside the building, Margaret was ushered along a passage.  At the end of the passage there was a door opening into an office, where she found herself standing in front of John Findlater, who was sitting behind a desk.  His manner was hostile in the extreme.  “What is your business?” he asked.  “I wish that you would be kind enough to insert my name in the books,” Margaret replied, “that I may go before the board.”  “I will do no such thing,” Findlater said. Then he added: “You must send your husband instead.”  “My husband is unable to attend,” Margaret replied.  Findlater now ordered Margaret to leave.  She refused, and asked him again to register her application.

Suddenly, even while Margaret was speaking, Findlater leapt up from his chair.  Seizing her arm, and using considerable force, he pushed her to the door.  He shouted to Waterman to assist him.  Waterman walked up to Margaret, put his arms around her waist, and started forcing her along the passage.  Margaret struggled, but Waterman managed to drag her to the outer door, where he attempted to thrust her out into the street.  At this point she lost her balance.  As she was being pushed through the door, and down the steps, she missed her footing.  She reached for the rails to avoid falling, but Waterman pulled her arms away.  He gave her a violent shove, which sent her tumbling on to the pavement.  She landed heavily on her hands and knees.

DUTY BOUND
Margaret was helped up from the pavement by another woman, a workhouse inmate who had witnessed the incident.  But as she got to her feet she experienced intense pain on one side of her ribcage and in one of her ankles.  She went at once to the London Hospital in Whitechapel Road, where a surgeon dressed her wounds.  The skin had been torn from her ankle, and blood was pouring from the ball of one of her thumbs, where flesh had been gouged out, leaving a deep gash.  She was made an out-patient of the hospital, and was still receiving treatment there when her case against John Findlater and John Waterman came before the Worship Street magistrate a week later, on the 18th of January. 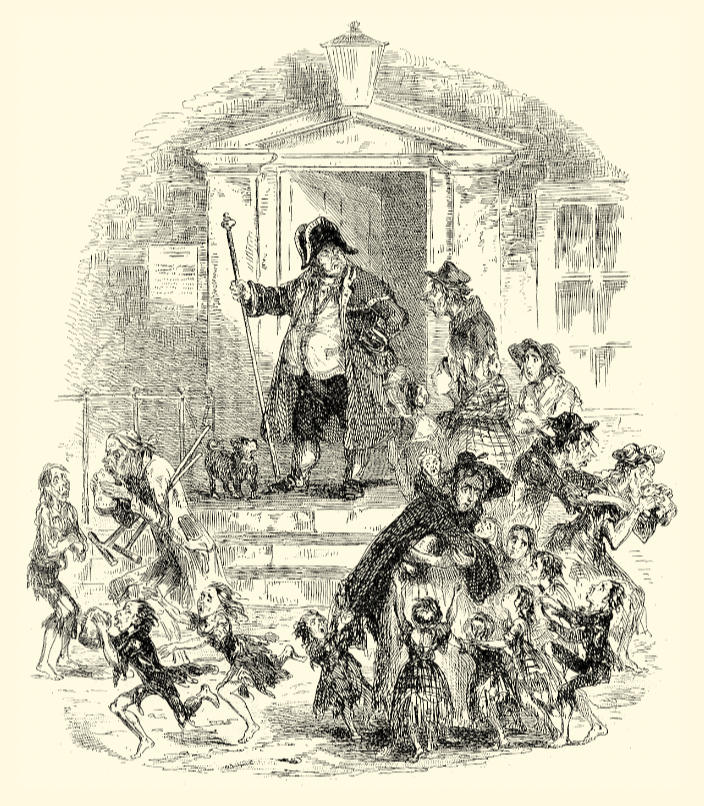 Applicants for outdoor relief submit to the judgement of a workhouse officer.  Image by Hablot Knight Browne, otherwise “Phiz”, in James Grant Sketches in London (1838) between pages 246 and 247.

Findlater’s defence was to offer a completely different version of events.  He claimed that this had not been the first time he had told Margaret that he needed to speak to her husband.  On every occasion, he went on, she had refused to comply, and had caused so much disturbance that he had been compelled more than once to call the police.  He conceded that on the Tuesday in question he had removed her from the workhouse with the help of the gatekeeper, but he had had no choice, and he had done so only after trying, repeatedly but in the end unsuccessfully, to persuade her to leave of her own free will.  He and Waterman had used only such force as was needed to remove Margaret from the premises.  He could not understand how she had sustained those injuries.  When her husband came to the workhouse, some time after the incident, he said that the hospital surgeon was of the view that they had been inflicted with a sharp cutting implement.  But no such implement was kept in that part of the workhouse.

The magistrate, John Hammill, was not impressed.  He reminded Findlater that he was duty bound to show forbearance towards applicants for relief, who in some cases were so distracted by their sufferings that they were bound to act in a difficult manner.  He and Waterman had not shown sufficient restraint.  Their behaviour had been inhumane, their violence unacceptable, and he felt himself obliged to send the case to be tried before a jury at the Clerkenwell County Sessions.

WE HAVE NO OPTION
At the trial on the 11th of April, which was presided over by Serjeant Adams, further details of Margaret’s circumstances emerged.  She appeared to be anxious to return to Saint Helena, and the purpose of her visit to the workhouse on the 11th of January was to apply for a free pass.  Findlater was refusing more than a routine application for relief.  In response Findlater maintained that he asked her to leave because free pass applications would be dealt with on another day.  He also insisted that the injury to her hand was accidental, that she had tried to steady herself by grasping the door frame, and that her hand had been caught as the door was being shut.  And she had not been thrown on to the pavement: she had fallen on to the pavement. 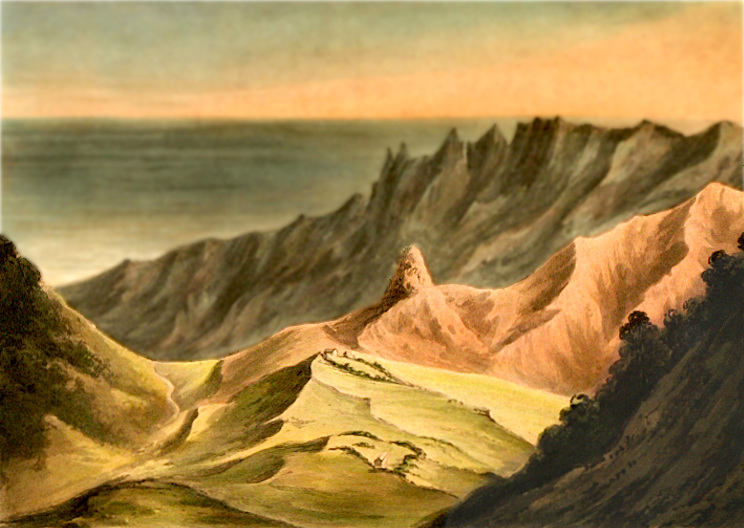 View out to sea from the interior of Saint Helena.  Watercolour by George Hutchins Bellasis dated 1815.

Given that Margaret was a poor woman, it might seem that the trial could only turn out one way, and, to be sure, Findlater and Waterman were both acquitted.  And one might suppose that the members of the jury did not believe Margaret because they preferred to believe Findlate, but Findlater really had nothing to do with it.  The reason they did not believe Margaret—at least the reason they gave the court—was that she appeared to them to be insane.  During the course of cross examination she had spoken of her “relationship” with the Holy Ghost, which left them in no doubt that she was subject to delusions.  Her testimony was not to be relied on, and so they, the members of the jury, had no option but to return two not guilty verdicts.

ON A LONDON PAVEMENT
One ray of light in this sad little story is that Serjeant Adams gave directions that Margaret be properly cared for.  He had compassion—exactly the quality that John Hammill had found wanting in the two workhouse officers.  But Margaret never fully recovered, and, although there are few traces of her in later records, we know that in 1854 she was placed in a workhouse asylum.  Of course it is not impossible that she did eventually get her free pass to Saint Helena, but somehow it seems unlikely.

And what of William, her husband?  We never find out why he was not at Margaret’s side when she asked John Findlater to register her application.  Maybe he was the reason she wanted to return to Saint Helena.  He died in 1856, at the age of sixty-one, and was buried in the City of London and Tower Hamlets Cemetery.  He was living in Stepney at the time, but he was found dying in the street.  He had been drinking heavily, and as he lay there, alone on a London pavement, his strength finally deserted him.

The Layton Affair: Part One