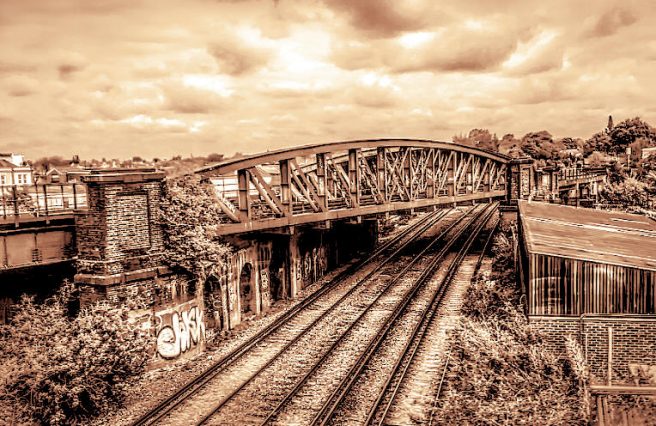 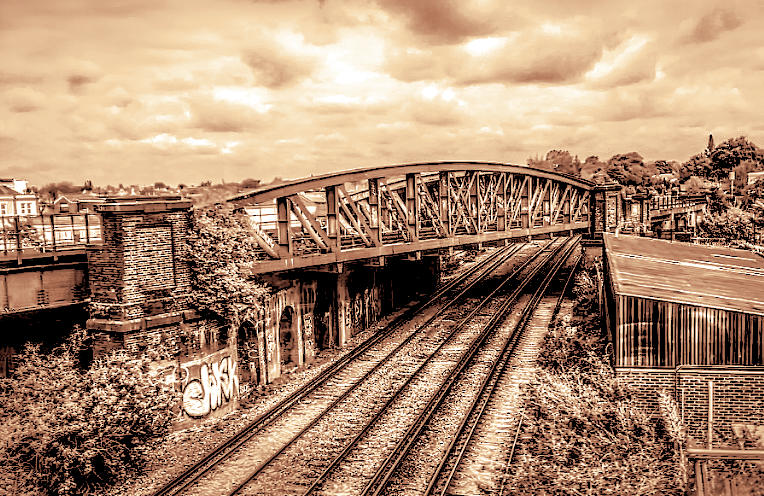 Viaduct railway bridge over the Portsmouth line at Streatham in South London.  George Johnson was guarding this location at the time of his death on the 17th of September 1914.  © William Ellis-Rees

If you read the first part of this story, which can be accessed by following this link to the London Overlooked website, you will remember that George Johnson was a police constable living and working in South London at the outbreak of the Great War in July 1914.  In these traumatic times the deteriorating state of relations in Europe had for many years generated suspicion of and hostility towards German and Austrian nationals resident in Britain and Ireland.  And it was in this climate of fear—fear for national security—that George Johnson met an untimely death.

In the early weeks of the war there were constant reports of subversive activities, many of them printed in the Times.  The methods of the spies and saboteurs were known to be various, in some cases openly confrontational, as when the occupants of a train travelling in Kent between Whitsable and Faversham had their compartment shot at, in others rather more covert, as when a man—“apparently a foreigner”—was spotted snooping around the railway workings in a key military area, or when another was discovered trying to break into a power station in London.  Every conceivable form of espionage was investigated, a precaution that even extended to resident Germans who bred carrier pigeons. 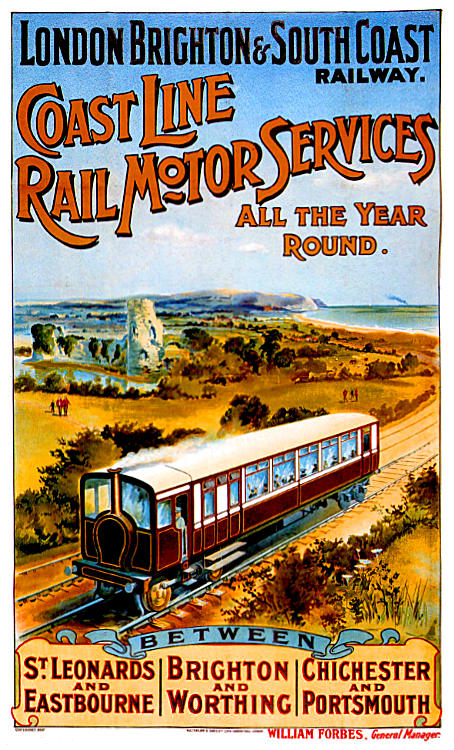 Poster for the London, Brighton and South Coast Railway.  Dated 1906.

WHERE WE ARE VULNERABLE
Just how seriously the danger posed by the “enemy within” was taken is seen in official documents.  Even in 1909, some years before the outbreak of hostilities, the Home Ports Defence Committee was directed to enquire

into the manner in which our magazines, dockyards, large oil-stores, cable landing stations, wireless stations, private shipbuilding yards, railway bridges, tunnels, and other vulnerable points are guarded, with a view to definitely assigning the responsibility for safeguarding these localities to the Admiralty, the War Office, or the Police.

Now, one of the many “vulnerable points” alluded to by the Committee was a viaduct railway bridge on a branch of the London, Brighton and South Coast Railway in the South London borough of Streatham.  And it was this bridge in Streatham that Police Constable George Johnson, who was based in the neighbouring borough of Tooting, had been ordered to safeguard on the day he died in September 1914.

The significance of the bridge lay in the fact that the Portsmouth main line passed beneath it.  It would be hard to overstate the wartime importance of Portsmouth, not only as a naval centre with access to the English Channel, but also as a key location for storing arms and ammunition.  Disruption of the transport of men and equipment by acts of sabotage against the Portsmouth line—blowing up a bridge, for example—would have done considerable damage to the war effort.  Guarding against such disruption was a serious matter. 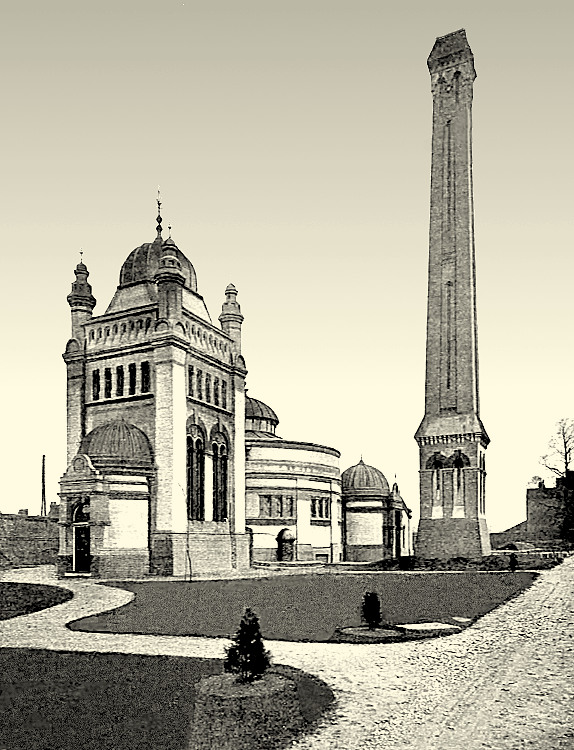 The Streatham Pumping Station.  Image in The Engineer 22 April 1898.

MAYBE MAKING MISCHIEF
But there was another good reason why the local police undertook this special duty, and to see what this was one only has to look at the Ordnance Survey map for Streatham in the wartime years, which can be accessed by following this link.   Along the western side of this stretch of the Portsmouth line, in Eardley Road, there were residential terraces, whereas on the eastern side, in Conyers Road, there was a large municipal enclosure, in which stood, and still stands, a pumping station.

This—the Streatham Pumping Station—was obviously a local “vulnerable point”.  We have already seen that a man had attempted to get on to the site of a London power station, and a pumping station presented the same sort of target for determined saboteurs.  The potential for mischief was very great.  The machinery might be rendered unusable by a well-placed bomb.  The water itself—and this is a horrifying thought—might be poisoned.  Not surprisingly, then, the duty entrusted to Police Constable George Johnson was to guard the railway bridge and the adjacent pumping station.

DOMES AND TURRETS
But before we go on with the story, it is worth looking at the Streatham Pumping Station, for it is truly remarkable.  Built towards the end of the nineteenth century for the Southwark and Vauxhall Waterworks Company by Messrs James Watt and Co. of Soho Foundry in Birmingham, from the designs of James William Restler, the station drew about two-and-a-half million gallons of water a day from a depth of almost two hundred and fifty feet.  The magnificent triple-expansion horizontal engines that accomplished this feat were housed inside a domed and turreted neo-Byzantine building, the elegant appearance of which was somewhat at odds with its prosaic purpose.  By a curious coincidence the construction work was done by the same Henry Holloway who employed George Johnson’s wife, Esther, as a domestic servant. 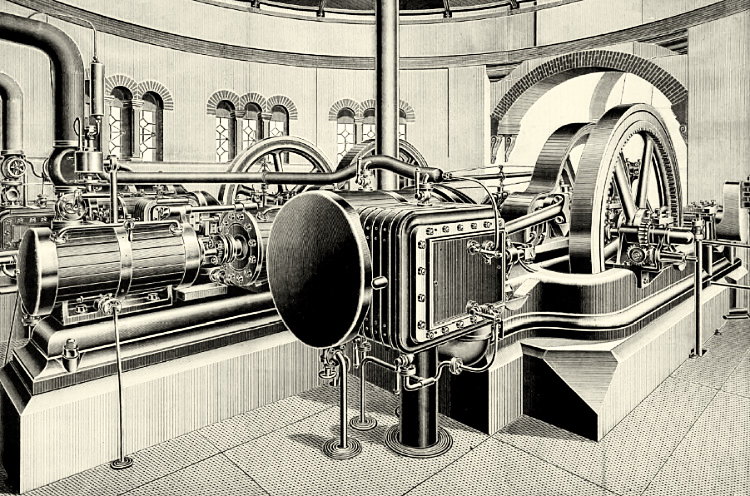 View of the interior of the Streatham Pumping Station.  Image in The Engineer 29 April 1898.

Little has changed in the last hundred or so years, and, when we peer through the railings that run along the Conyers Road side of the pumping station, we are seeing almost exactly what George Johnson would have seen.  With one important difference, though.  Whereas we can walk up and down the pavement in complete safety, the police constable, stationed on the railway line, was in great danger.  Nor was the danger only of enemy activity, as he was about to discover to his cost.  For suddenly, as a train thundered past, he was felled by a terrific blow.

A BODY ON THE LINE
George had been hit by the train.  We do not know whether he was standing on or under the bridge.  Nor do we know the exact nature of the injury.  But it is possible that a carriage door which had accidentally been left open had swung against him, as had happened only recently to a member of the Civil Guard at Worthing, a man by the name of Arthur Gordon Wright.  Ironically, Wright had also been patrolling the Portsmouth line.

Poor Arthur Wright had been discovered by two fellow members of the Civil Guard.  He was dead—his skull had been fractured—and his body was slumped at the side of the track a few yards from the end of a station platform.  He had lain there for about an hour.  Maybe the injured George Johnson had also lain alone for some time until seen by another police constable, or by a passer-by.  Maybe the driver of the train had realised what had happened, and had stopped to rescue the stricken man.  We do not know. 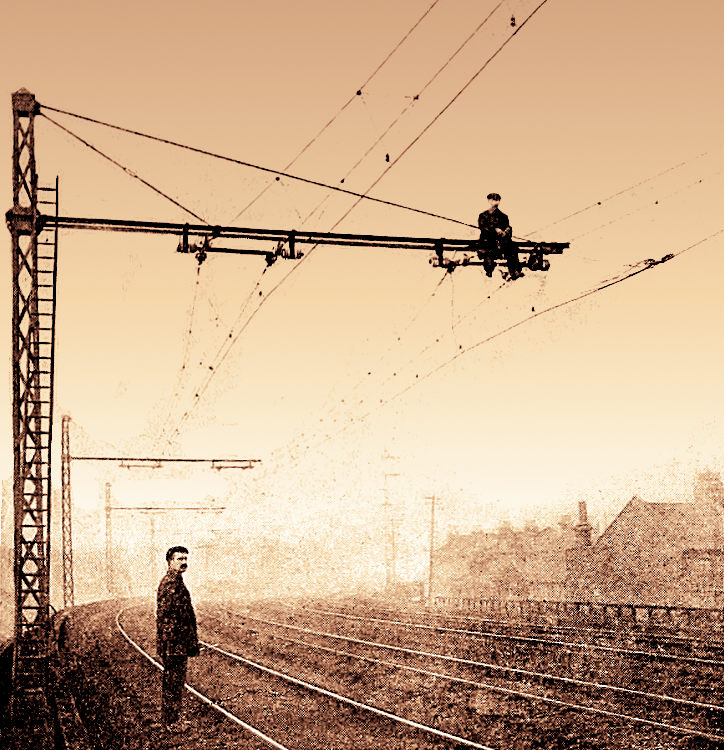 Men working on the construction of overhead electrical lines on the London, Brighton and South Coast Railway.  Image in Electric Railway Journal volume 33 (May 1909) page 840.

But we do know that in spite of the awful accident George was still breathing.  He was taken to the Bolingbroke Hospital, which was about three miles away, near Wandsworth Common.  But his injuries were too serious for there to be a realistic hope of survival, and on Thursday the 17th of September he died.

NOT SO INNOCENT
On the evening of Monday the 21st of September an inquest was held at the Battersea Coroner’s Court in Sheepcote Lane.  The coroner for the City of Westminster and South-West London, Samuel Ingleby Oddie, recorded a verdict of accidental death, and added that it was not the first of its kind.  He went on to observe that guarding railway bridges was a hazardous but essential undertaking, and that those who put themselves at risk in this way were doing a service for their country “almost as great” as the soldiers fighting at the front.

Oddie developed his theme.  Apologising for discussing matters of public policy, he suggested that the very considerable risks faced by the police and special constables would be relieved by the deportation of German and Austrian nationals.  In his view they and they alone were the enemy within.  He conceded that the matter was made complicated by the fact that “there were thousands of Germans in this country who were perfectly innocent and decent men”.  Sadly, though, some were neither innocent nor decent.  They were spies, or saboteurs, who not only imperilled those who guarded the infrastructure, but also drew unwelcome and undeserved attention to their fellow nationals.

Having made known his views, which would have resonated with many in those tumultuous times, Oddie expressed his sympathy with the widow and family of the dead man.  At the age of forty-two George’s widow, Esther Emily Johnson, was in the prime of her life.  But now she had to care for two children—Edward Thomas Johnson and Elsie Mabel Johnson—on her own.  Edward was twelve, Elsie was ten.  One wonders how children that young dealt with the death of their father. 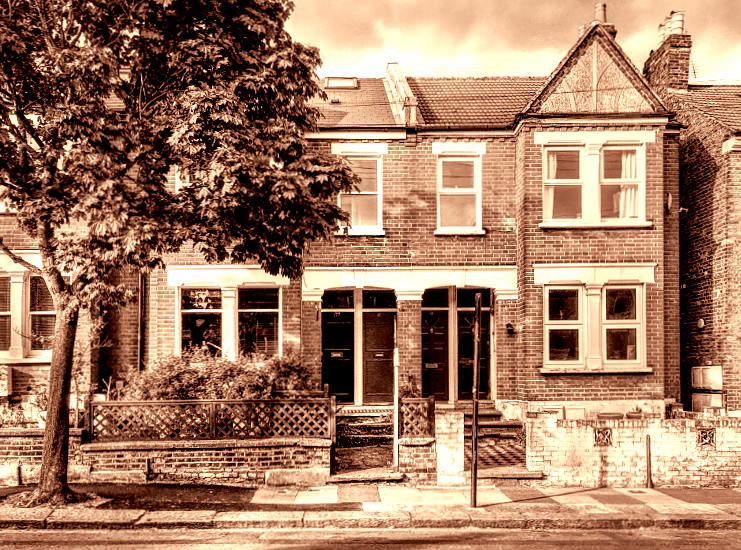 Terraced houses in Tooting Graveney.  George Johnson lived with his family in the house in the left half of the property.  © William Ellis-Rees

CHIPS OFF THE OLD BLOCK
Esther Emily Johnson remained in the house in Tooting Graveney she had been living in at the time of her husband’s death, and died there in 1943, aged seventy-one.  There is something poignant in the fact that even in her final years she was not allowed to draw a line under her experience of war.  But she was never alone, for her daughter, Elsie, lived with her right to the end.  Elsie never married, and she stayed in her childhood home until her own death in 1987 at the age of eighty-two.  We know very little about her life, only that when the Second World War broke out she was employed as a shorthand typist, and that she put her skills to use as a volunteer in an Air Raid Protection report centre, making her own significant contribution to the national cause.  She really was her father’s daughter.

And Edward was very much his father’s son, for when he married in 1924 he was employed as a police constable.  He had been too young to fight in the war, and he had started his working life as a brass finisher before enlisting in the Tank Corps in 1919.  His spell in the army has left us a delightful sketch of his physical appearance: not that tall, slight of build, a fresh complexion and brown eyes.  If we knew that he took after his father, then we would have an image, albeit indistinct, of the police constable who in 1914 made the ultimate sacrifice in the service of his country.

Edward married a Florence Maud Dannell, the daughter of a commercial traveller, who lived in the same street in Tooting Graveney, just a few doors away.  We will leave it to the reader to supply the details—suffice it say that they married in June and had a son the following January!  Thereafter Edward disappears from the records.  In 1928 Florence was living alone next door to her mother-in-law.  It is possible that she was divorced, but it is equally possible that she was widowed, and, if so, then the Edward T Johnson who died in Kensington in 1926 may well have been the young police constable she had married only two years before.

The Railway Children, or, A Moving Story of Youthful Heroism