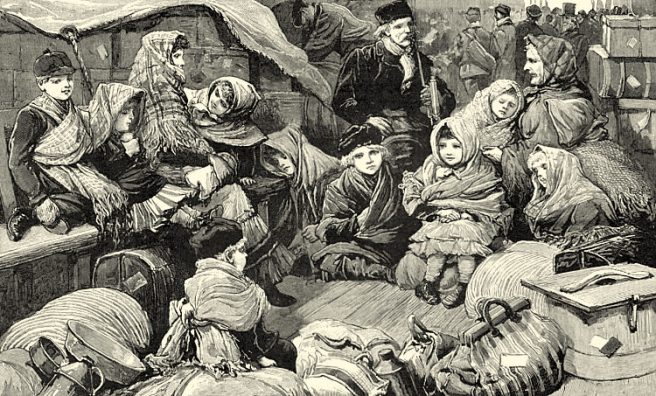 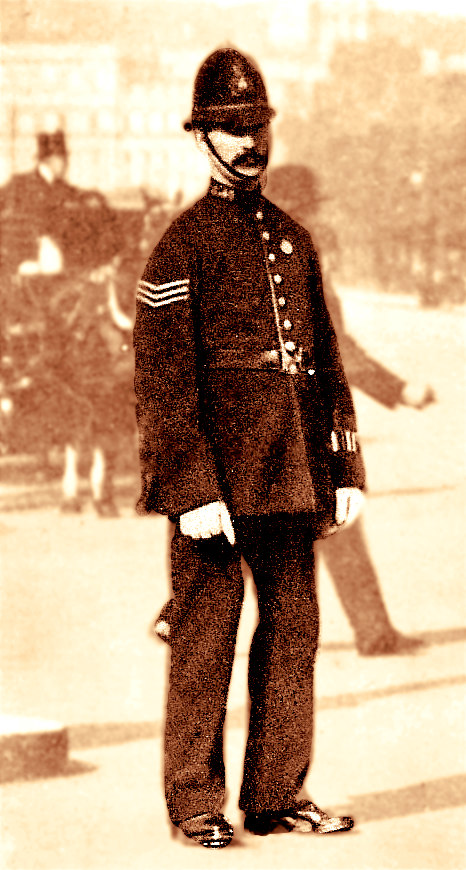 A London policeman of the Edwardian period.  His three stripes mark him out as a sergeant, whereas George Johnson was a constable.  Postcard dated c.1905.

In a churchyard in South London there is an unassuming headstone bearing the name of a certain George Johnson.  We are told that George Johnson was a police constable, and that he was a member of the “W” or Clapham Division, with warrant number 202.   He died “through injuries received in the execution of his duty” on the 17th September 1914.  He was forty-four years old, and married with a young family.

How Police Constable Johnson came to receive those fatal injuries is a sad and rather extraordinary story.  Although he was a regular copper, a local man who lived in a quiet terraced street, in a modest house with a front yard and a back garden, his death was linked with events that were unfolding far beyond the boundaries of his world.  For in the early autumn of the year 1914 the First World War had already been raging for two months on the other side of the English Channel.  British forces were already confronting the German army, which had pushed down through Belgium into north eastern France.  But civilian life was affected too, and, as we shall see, the impact of a conflict that had broken out on the Continent was felt even in South London, and by men like Police Constable Johnson.

A QUIET CORNER
George Johnson was not a Londoner in the strict sense, for he had been born in Hertfordshire, in the village of Stocking Pelham.  His father, Thomas Johnson, was an agricultural labourer, and by the time of his birth in 1870 his mother, Elizabeth Johnson, already had three other sons and two daughters to care for.  The two oldest boys, who were still in their teens, were also agricultural labourers, as indeed were many members of the male workforce in that part of the country.  Both the parents were local: Elizabeth came from Stocking Pelham itself, Thomas from a neighbouring village, Furneux Pelham.  George’s brothers and sisters were all born in one or the other of these two villages, which must have made for a strong sense of family rootedness.

By the time he was ten George was engaged in the same occupation as his father and his older brothers.  But he did not stay long in Hertfordshire, and at some point he moved down to London.  We know that at the age of twenty-one he was lodging with a brewery worker and his family in Islington, making his living as a general labourer.  We also know that this state of affairs did not last long either, for in due course George had enrolled in the police force, and was boarding in the police station in Tooting Graveney with a number of other constables. 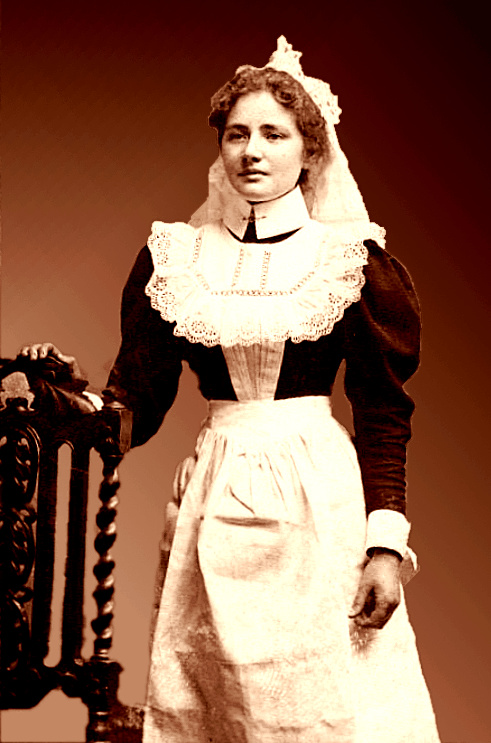 A domestic servant of the Edwardian period.  Studio photograph undated.

In 1907, at the age of thirty-one, George married Esther Emily Drage, who was twenty-nine.  Esther came from Bozeat, a village in Northamptonshire, where her father, John Drage, worked as a shoemaker.  She was a domestic servant, first in Northamptonshire, and later in Tooting Graveney in the home of Henry Holloway, who was a prominent building contractor as well as a fervent member of the Wesleyan Methodist church.  They had a son, Edward Thomas, and a daughter, Elsie Mabel, who were born in 1902 and 1904.

And, as far as we can tell, and at least down to the outbreak of war, life for the Johnson family in this quiet corner of South London was perfectly unremarkable.  George and Esther duly entered their forties, while Edward and Elsie approached adolescence.  But in September 1914 all that changed, dramatically and irreversibly, when, as we have seen, George died from injuries received in the line of duty.  And that duty was to guard a road bridge over a railway line, and to keep it safe from the enemy, who were, to be precise, the “enemy within”.

THE ENEMY WITHIN
Even before July 1914 there had been antagonism towards Germans resident in Britain.  In part this was an aspect of the general xenophobia that all immigrant groups experienced throughout the nineteenth century.  However, hostility became more pronounced in the 1890s, as Anglo-German political relations steadily deteriorated.  The phenomenon intensified even further in the years before the Great War, when it took the particular form of a fear of subversive activities on this side of the Channel.

Suspicion fell on German residents in all walks of life, and a letter that was published in the Times in 1908 is a good example of a growing concern about spies, who, it was widely assumed, were busy building up an intimate knowledge of places that were vital to national security: 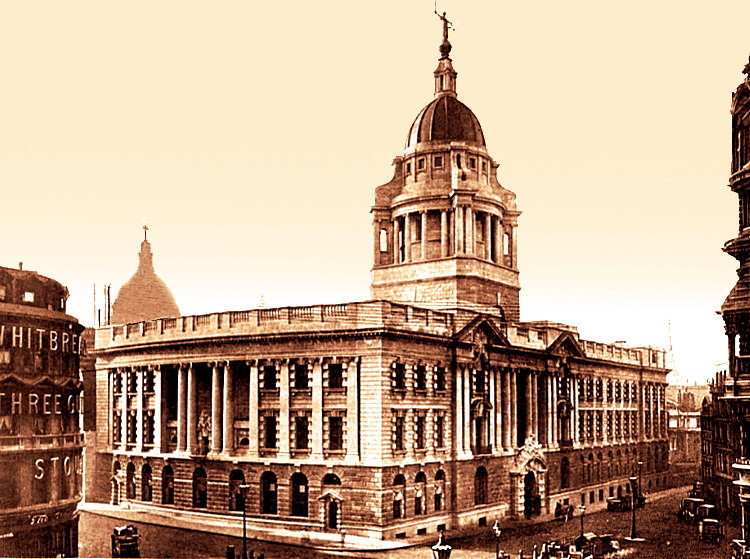 The Old Bailey as it is today was designed by Edward William Mountford and built by the construction company of Holloway Brothers.  The building was opened in 1907.  Image in The Graphic 23 February 1907.

I am certain that, as regards Great Britain and Ireland, Germany not only possesses now a vast mass of this knowledge in its most detailed form, but is constantly acquiring more.  And amongst those who contribute largely to the stock are the crowd of Germans who, after serving in humble capacities in this country, such as waiters at restaurants, &c., return home, possibly for their annual army training, each with his little item of information.

The writer of the letter—Colonel Lonsdale Hale—went on to offer anecdotal evidence in support of his views:

I do sometimes have my hair cut, and a short time ago I missed the German who had had to do his best to make my head look tidy.  His employer told me he had gone.  I wondered whether in his pocket-book were memoranda as to the telegraph wires outside the shop, the sidings at Camberley Railway Station, or the bridges over the Blackwater.

Hale was certainly not alone in warning that the “enemy within” might be plotting acts of sabotage against the infrastructure.  A fellow soldier, Lieutenant-Colonel John Macclesfield Heath, had written a letter to the Globe in the previous year in which he had shared the following apocalyptic vision:

The streets of London, as anyone must observe, swarm with Germans.  Where do they go?  What do they do?  They appear in no hurry.  They are comfortably dressed and well nourished.  Undoubtedly soldiers.  I have noted them with interest for years.  They are unusually numerous now.  We shall awake one morning to find all important commanding points in London held by armed Germans.  The railways cut, bridges blown up, and points destroyed. 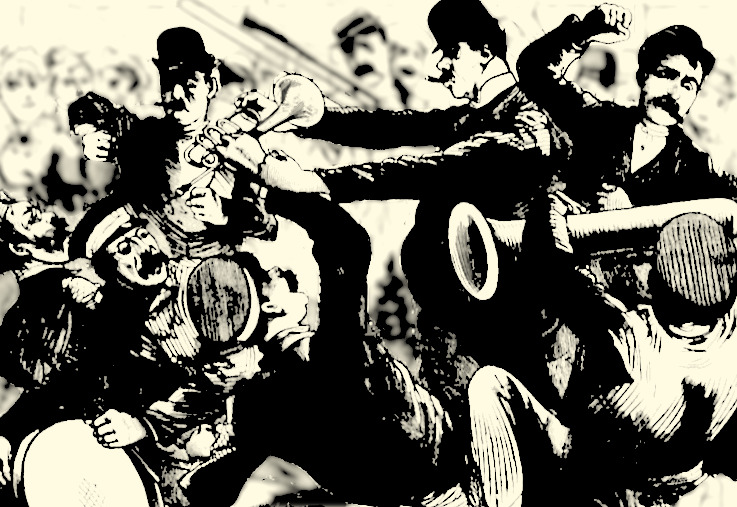 A German street band being attacked by ruffians, who, one suspects, are not simply objecting to oompah music.  Image in Boxing World and Mirror of Life 29 August 1900.

SPY MANIA
Nothing illustrates this “spy mania” more powerfully than reports of alarming occurrences in the opening weeks of the war, and the Times regularly printed these under dramatic headlines like “Suspected Spies” and “The Alien Peril”.  A degree of paranoia must have been at play in some cases, such as the arrest of Franz Heinrich Losel, a photographer who was spotted with a camera on a sea wall at Sheerness in Kent facing the naval harbour.  In other cases, though, there was hard evidence to support suspicions.  Karl Hammer, a waiter, was found to have a Winchester repeater rifle, some maps and an atlas in his lodgings, while Hermann William Wahnschiff, a bank clerk, was charged with failing to disclose that he possessed firearms when he registered  himself with the police as a foreign national in response to the Aliens Restriction Act, which had been passed early in August.  The kit that was eventually unearthed comprised a revolver, a pistol, a pair of field glasses, a combined wire-cutter and hammer, two nautical books, two maps, a diagram of German ships and a camera.

Hammer was charged in the West London Court, and Wahnschiff in the Marylebone Police Court, and it goes without saying that the capital, with its dense and fluid population, was highly susceptible to concerns over security.  But these scenes were being repeated up and down the country.  And so we read Times reports of a German pastor charged with spying in South Shields, an Austrian resident employed as a draughtsman at Swann Hunter on Tyneside charged with possessing photographs of submarines and specifications, and so on.  Some suspicions bordered on the bizarre.  A gentleman living in Torquay, who had at one time occupied “an intimate position” at the German court, was reputed to be familiar with “every horse trough for miles round”.  Meanwhile an ex-army officer claimed to have seen two signed commissions in the window of a curio shop, and

this in a town where numbers of Germans reside and where two spies have lately been arrested, one in female attire.

The name of the town was not disclosed, but it was clearly on the qui vive for the clandestine activities of the enemy within.  And on occasions jitteriness had unfortunate consequences, as when soldiers guarding Rochester Bridge on the River Medway fired on a rowing boat, whose occupants were certainly not German saboteurs.  In fact they were a police patrol: they had not heard the challenge shouted at them by the soldiers.  The soldiers for their part had not fully realised who was in the boat.  But no one was hurt.

German families at the railway station in Liverpool.  Image in The Graphic 15 November 1884.

A REAL THREAT
The Times stated openly that there was no desire for a systematic campaign against naturalised foreigners.  However, it cautioned that the threat from spies and saboteurs was real, and to underline the point it printed an analysis of the occupations of those who had already  been arrested on charges of espionage:

No one, it would seem, was above suspicion, no matter who they were or how they were employed.  And it was against this backdrop of heightened awareness—this urgent concern to safeguard the infrastructure—that George Johnson met his untimely death … TO BE CONCLUDED

The Gray’s Inn Road Fire, or, The Case For Constable Carter

The Gray’s Inn Road Fire, or, The Case Against Constable Carter

A Copper and his Coat