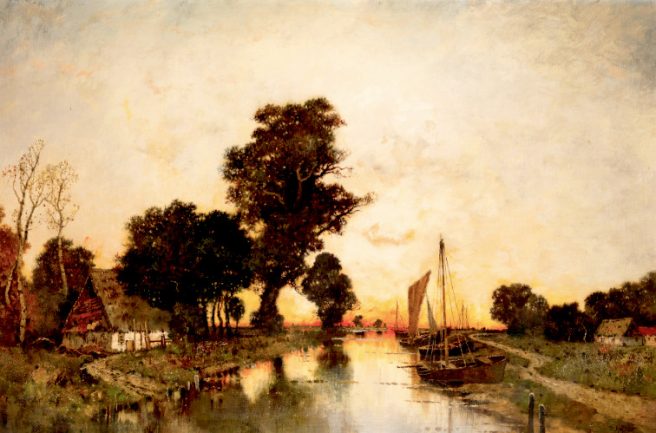 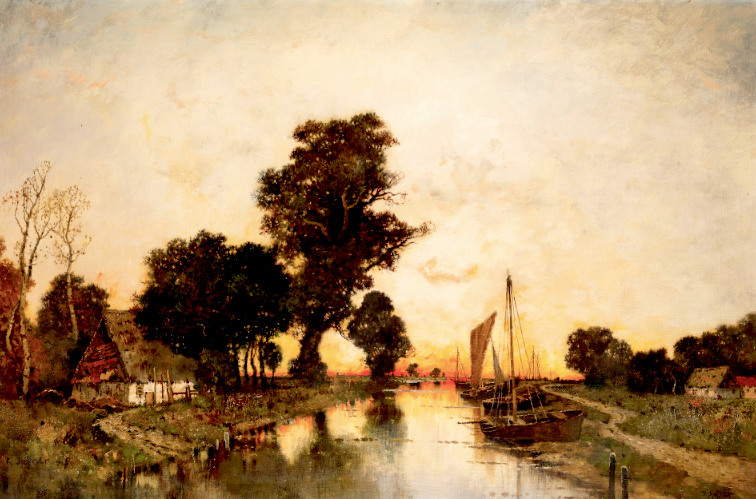 If you read our article on Nikolai Astrup, which can be found here, you will remember that the Norwegian painter came to London early in 1908 on a sort of creative sabbatical.  Among the works he noted in the capital’s galleries were paintings in the Victoria and Albert Museum by Karl Heffner, a name one does not now hear that often, if at all. 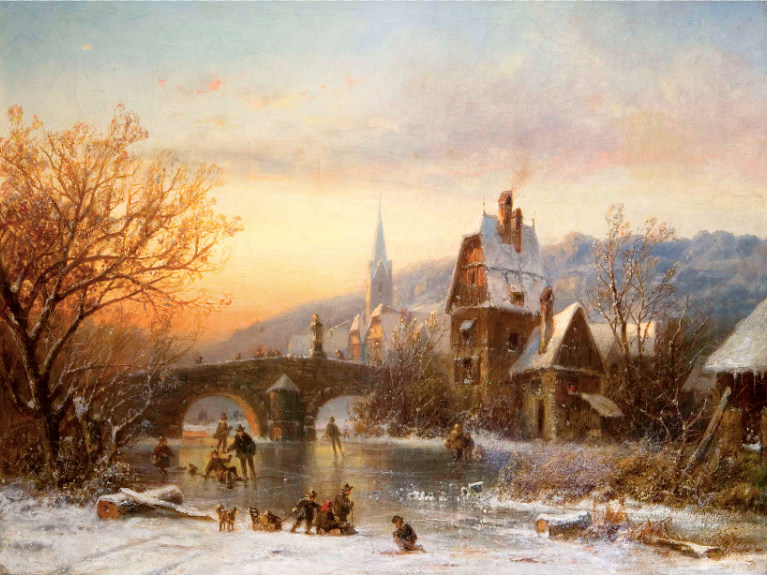 Although many of Heffner’s works found their way into private collections, the South Kensington museum owns fifteen.  They are principally landscapes, ranging in subject from flat countryside to the greater drama of the hills over Florence, of the Swiss lakes, of Mont Blanc and the Matterhorn.  There are fine depictions of skies—a pale yellow expanse stretched across the Rhenish lowlands, backlit evening clouds marching across the wintry River Isar, a sun setting in a final burst of lemon light.

In his day Heffner was much admired.  He certainly caught the eye of the art world, and his paintings were exhibited and bought.  So what did the connoisseurs and the collectors see in him?  We at London Overlooked have investigated, and we have come to the conclusion that Astrup was right, and that Heffner is worth at least a second look. 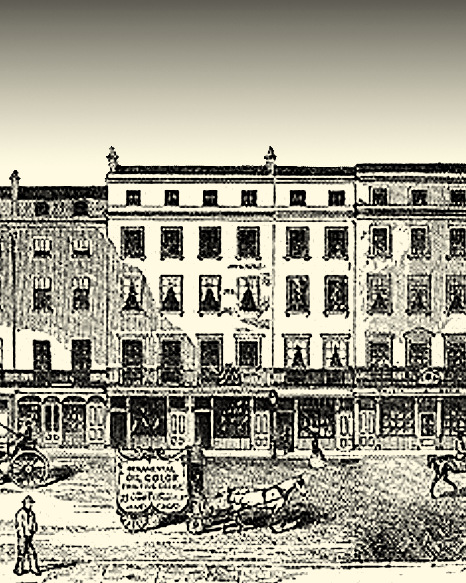 THE QUALITY OF LIGHT
Karl Heffner was born in Würzburg in Bavaria in 1849.  His early training was as a musician, but he had a strong interest in painting, and he travelled to Munich to study with Adolf Stademann and Adolf Heinrich Lier.  Stademann was first and last a painter of landscapes, and, as an admirer of the seventeenth-century Dutch masters, he was able to teach Heffner how to capture the subtle quality of winter light.  Lier, also a landscapist, subscribed to the realism of the Barbizon school, and we see his influence in the directness and immediacy that characterise many of the scenes painted by Heffner.

Heffner’s association with England, and in particular with the London art world, owed a great deal to Thomas “Tom” Wallis.  This prominent art dealer had started out as an engineer, and for a time lived in Australia.  But on his return in 1862, when he was still a young man in his twenties, he changed direction completely.  He worked for his father, William Henry Wallis, who had trained as a line-engraver, and who at the time managed the French Gallery at 120 Pall Mall.

The French Gallery had been founded in 1854 by the Belgian-born Ernest Gambart, who had considerable clout as an art publisher and dealer.  Special attention was paid to the work of contemporary Continental painters.  Gambart, for example, was instrumental in launching the career of Lawrence Alma-Tadema, who, for all his fame as the preeminent Victorian painter, was in fact Dutch.  Wallis was equally vigorous in promoting artistic talent, and he takes at least some of the credit for the success of Jacob Maris and his brothers Willem and Matthijs, as well as that of Anton Mauve and Jozef Israëls, all of whom were, like Alma-Tadema, Dutch. 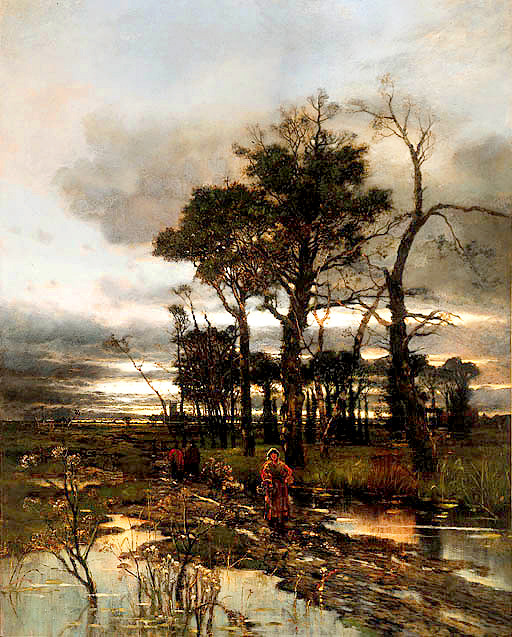 The importance to Heffner of the French Gallery cannot be overstated.  Exhibitions of contemporary work were held twice a year, and some of Heffner’s English landscapes went on show in the refined spaces of 120 Pall Mall.  The catalogue for 1898, for example, lists views of Yarmouth and the Norfolk Broads, as well as Datchet and a backwater on the Thames.  Several other paintings executed on the Continent were included, and it is obvious that in this year alone Heffner was being afforded generous exposure through the patronage of Wallis.

Wallis retired from the French Gallery in 1910.  On his death in April 1916 he was able to leave in excess of seventy thousand pounds to his widow, Margaret Ann, and to two sons, Harry and Harold.  However, what must seem to have been a charmed life spent in the company of artists and their works had its share of troubles, for health failed him in old age, and a daughter, Maggie, died the year before on Christmas Eve.  Maggie was in her late forties in 1915, and for much of her life she had lived with Tom and Margaret, remaining unmarried. 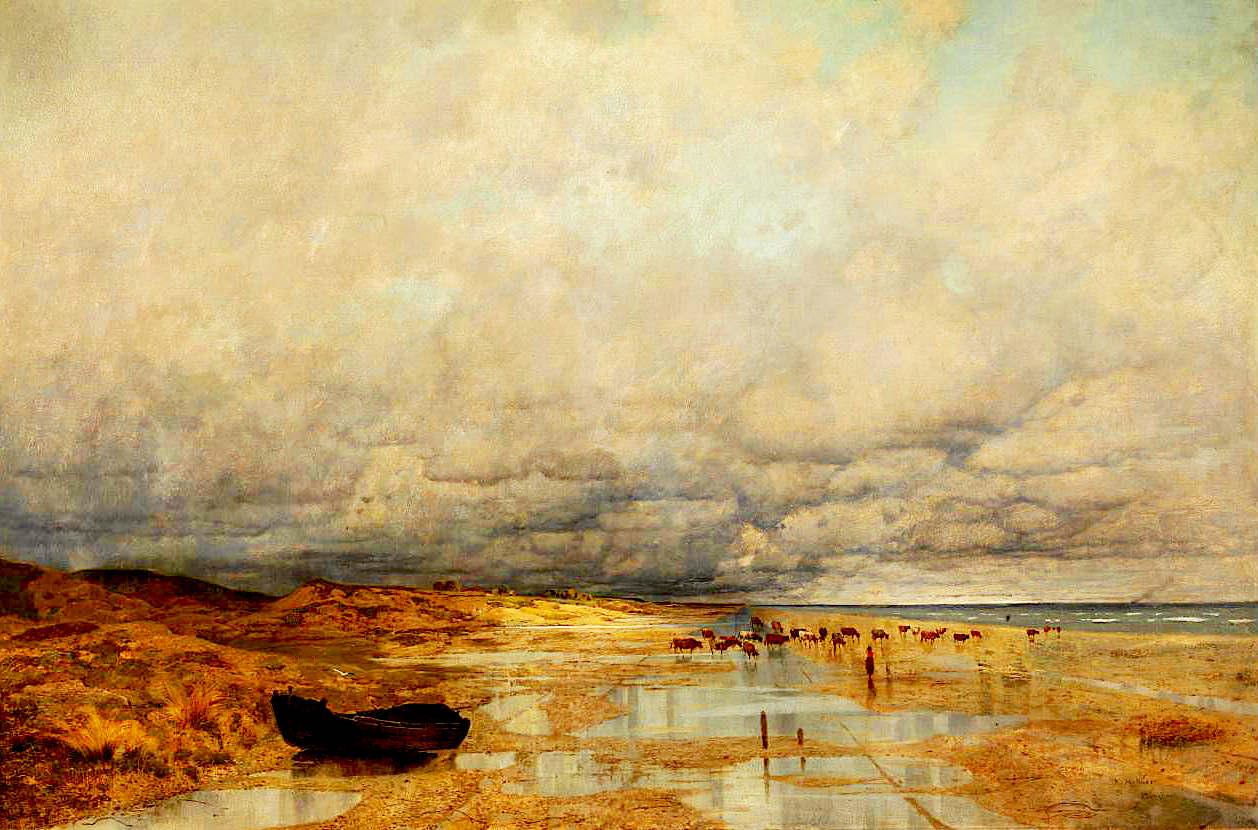 Flitting Gleam before the Storm by Karl Heffner.

WHERE HE IS AT HOME
Wallis’s success in showcasing the art of Heffner was not limited to English collectors.  In 1885 a view of Ostia, which had been exhibited at 120 Pall Mall, was purchased for the National Art Gallery of New South Wales in Sydney.  Possibly Wallis exploited connections that he had cultivated during his years in Australia, for Sydney already had a “Twilight in Bavaria” and a “Desolation”, and the National Gallery of Victoria in Melbourne had acquired a “Flitting Gleam before the Storm” and in due course would add an “Early Morning, Bavaria”.  He might also have been responsible for introducing Heffner’s work to American collectors, and in 1891 a picture with the title “The Gloaming” featured in an “important collection of modern paintings” that was sold by auction in New York by George Ingraham Seney, a wealthy banker and philanthropist. 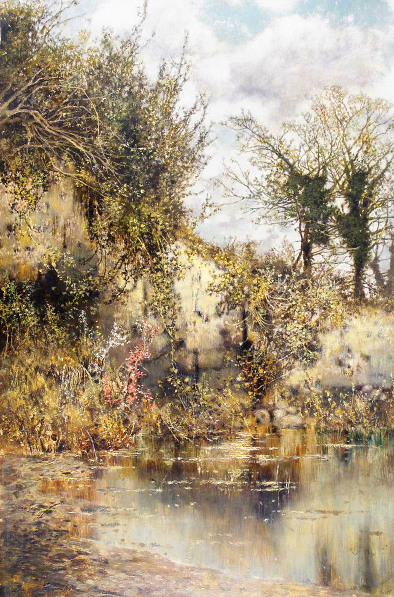 The catalogue for the Seney sale considered the English landscapes the best of Heffner’s work:

the alliance of land and water is his favourite theme.  Wide rivers, showery skies, wastes of marshland, and the luxuriant vegetation of drowned meadows and groves rooted in the moist soil of alluvial streams, provide him with his best-loved material.  Among these he is at home, as Daubigny was on the placid current of the Oise, as Millet was in the fields of Barbizon, and Corot among the silvery willows of Ville d’Avray.

Elsewhere the Dutch subjects are praised.  The Official Guide to the Centennial International Exhibition held in 1888 in Melbourne, where a “Golden Eve” and a “Silver Morning” were on display, gave fulsome praise to Heffner, who

delights in the grey mists of early mornings on Dutch foreshores, and in the mysterious golden glamour of riverside sunsets, latticed by interstices of branches and tree trunks. 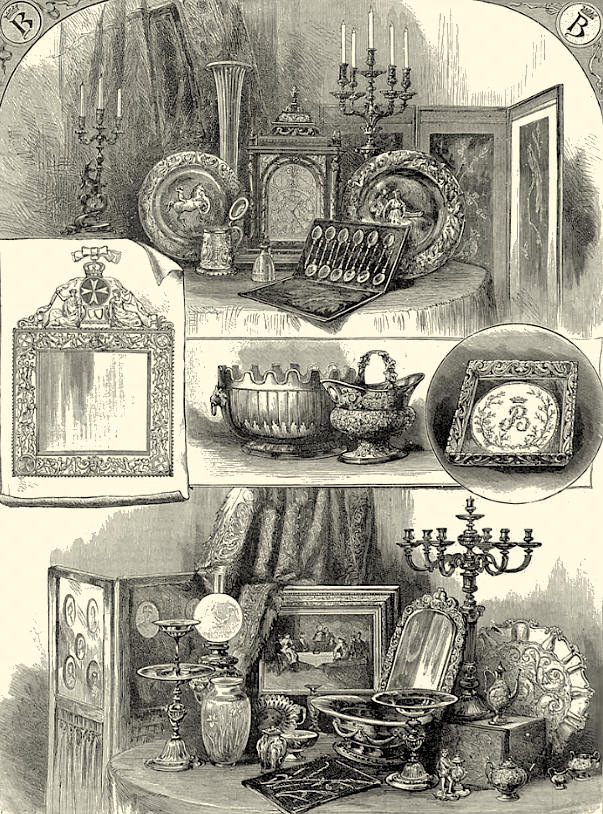 Wedding gifts presented to Princess Beatrice and Prince Henry of Battenberg.  The wedding took place at Whippingham on the Isle of Wight on 23 July 1885.  Image in The Illustrated London News 27 July 1885.

LANDSCAPE WITH CASTLE
But there were greater triumphs even than these.  For early in 1885 Wallis was asked to submit some paintings then being exhibited in the French Gallery for the inspection of the Prince of Wales, the future King Edward VII.  Those chosen were by Heffner, who by now had acquired the honorary title of Professor, and Leopold Carl Müller, an Austrian genre painter and also an honorary Professor.  Edward must have admired Heffner, for he commissioned a painting, which he insisted was to be an English landscape, although he left the choice of view to the discretion of the painter. 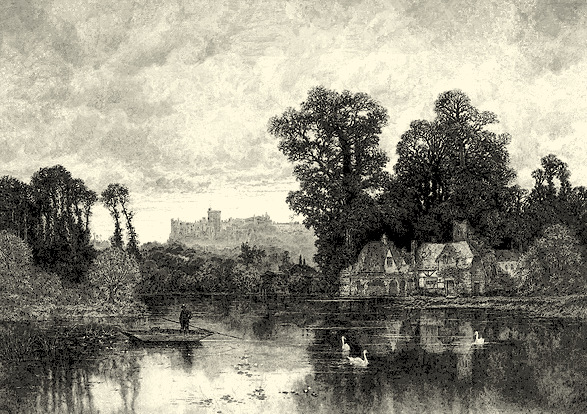 View of Windsor Castle with the River Thames in the foreground.  Etching by Alfred Louis Brunet-Debaines after the painting by Karl Heffner.

As one can imagine, all this was accompanied by a flurry of interest in the society pages of the newspapers.  When the painting was delivered in the summer of that year, it was noted that Professor Heffner had chosen as his subject a view of Windsor Castle.  How free a choice this had in fact been is something we might speculate about, but for all that it is a delightful image.  The distant castle hardly disturbs the simple rustic charm of the foreground scene, in which a man in a punt and swans animate the tranquil expanse of water.  Edward gave the painting to his sister Beatrice on her marriage to Prince Henry of Battenberg, although one might suppose that it had some stiff competition from the many costly wedding gifts that were sent to the happy couple from all corners of the Empire, as required by the immutable laws of patronage. 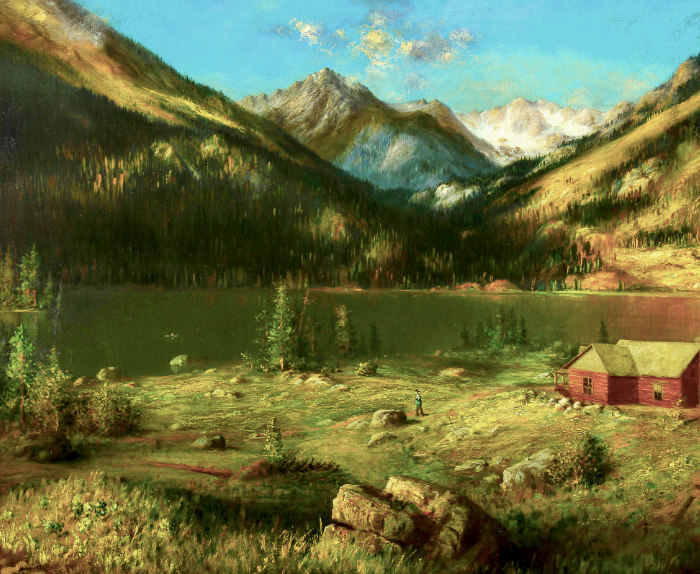 MORE THAN A GLANCE
Heffner died in 1925, well into his seventies, in his native Germany.  In his lifetime he had received widespread recognition, and had exhibited on the Continent as well as in London, at the Royal Academy and the Grosvenor Gallery, and of course at the French Gallery in Pall Mall.  He was the subject of many favourable reviews, and he was praised for the charm of his paintings, and for the poetic feeling he expressed through them.

We end where we began, with Nikolai Astrup in the Victoria and Albert Museum.  Astrup was a passionate admirer of Constable, and it is perhaps significant that Heffner’s technique reveals the influence of the great English landscape artist.  Astrup, in his own work, found inspiration in the lakes and mountains of Norway, and one can well imagine that he gave Heffner’s images of Mont Blanc and the Wetterhorn and the Staubbach Falls more than a cursory glance.  And if he did, then he paid fitting tribute to a fine artist, an honorary Londoner who is now all but overlooked.