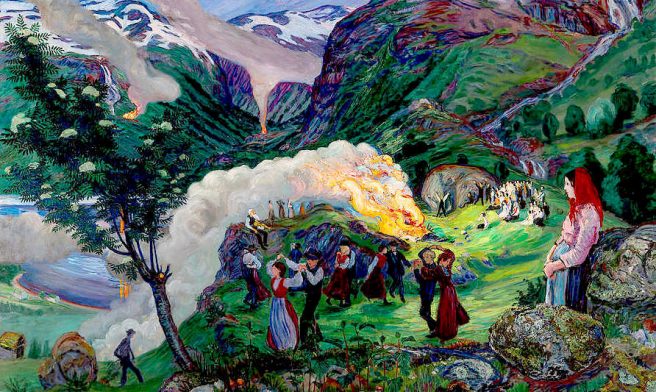 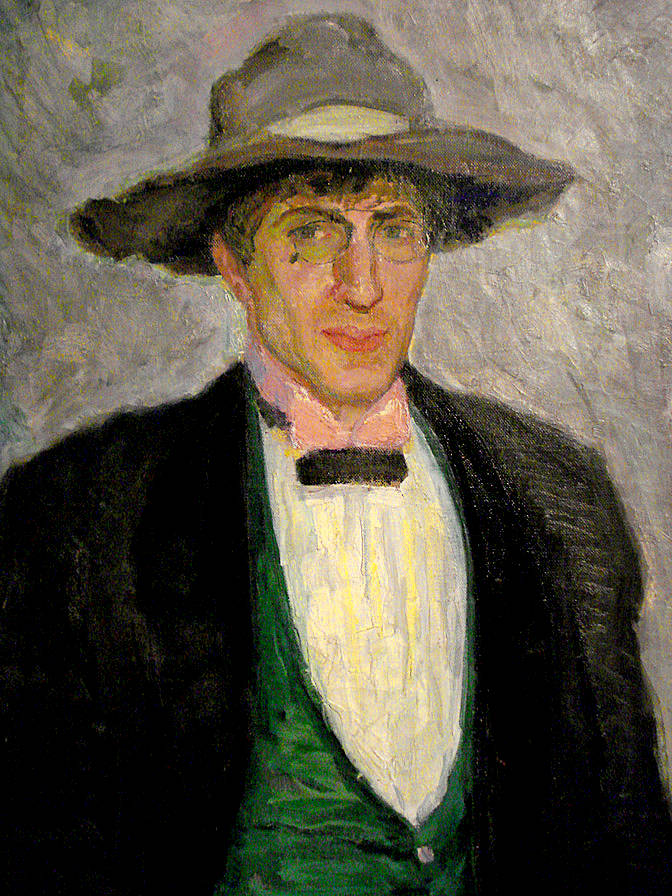 Nikolai Astrup is not a name we hear very often.  And yet the Norwegian artist, who died in 1928, produced a body of work that makes him of more than passing interest.  His paintings and woodcuts of the mountains and fields of his native land are imbued with an idiosyncratic vision and an unusual intensity of feeling.  Among the artists of Norway he surely ranks alongside his contemporary, Edvard Munch, whose fame has possibly made it harder for him to achieve the recognition he deserves.

We at London Overlooked have a particular interest in Astrup.  For in the early weeks of 1908 he came to England to visit the capital’s great collections.  He recorded his very personal impressions in his notebooks and correspondence, and these afford a fascinating glimpse of the processes that shaped his own art.  In any case we like to think of Astrup as an honorary Londoner, and, at least until he is better known, an overlooked Londoner at that.

A GUEST IN LONDON
Nikolai Johannes Astrup was born on the 30th of August 1880 in Kalvåg, a village on the west coast island of Frøya, which lies at the entrance to the Nordfjord.  However, he grew up further inland in Ålhus, a village in the municipality of Jølster.  His father, who had been appointed parish pastor in Ålhus, fiercely opposed his ambition to be an artist.  But in 1899 he went to Oslo, which was then known as Kristiania, in order to further his studies, and it was there that his talent really began to emerge.  Although he came into contact with representatives of an identifiable “Norwegian” movement in art, he made an effort to open himself to a range of influences by travelling to important galleries in Europe.

In the autumn of 1901, with the financial support of Olaf Fredrik Schou, a wealthy industrialist and art collector, he visited Hamburg, Berlin, Dresden and Munich.  By the end of the year he was in Paris, and in the weeks that followed he studied works by Maurice Denis and Henri Rousseau, as well as Japanese woodblock prints.  Now fully awake to the artistic potential of his native land he returned to Norway in the late spring of 1902.  But a few years later he embarked on another European tour, and in January 1908 he arrived in London, where with the help of a grant from the Henrichsen Foundation he remained until May of the same year. 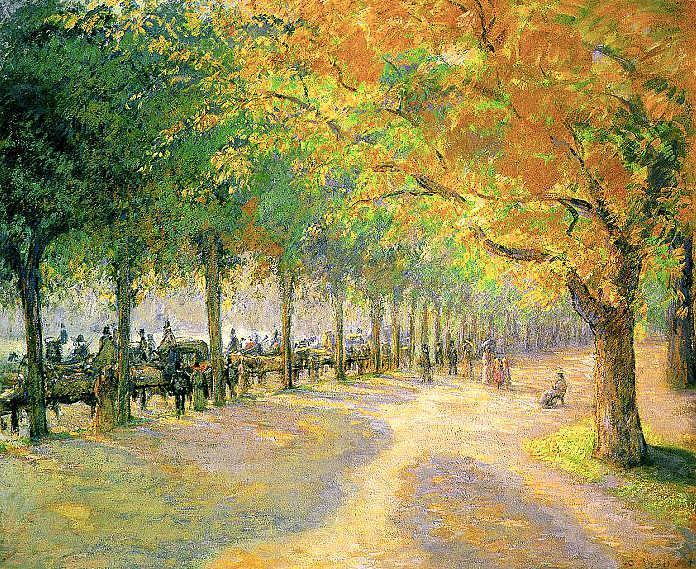 He stayed in King’s Cross, close to the station, in what is now Birkenhead Street but was then Liverpool Street.  (He pointed out in a letter to Henrik Lund, a fellow Norwegian painter, that there were several Liverpool Streets in London.  He was right: the Post Office directory for 1908 lists four!)  He had found accommodation at no.6, which was advertised as Whitney’s Private Hotel.  In fact it was a small guest house, run by a Mary Harris.  Next door was a similar establishment, and many of the neighbouring houses were offering rented apartments.  A photograph of Liverpool Street in 1906 shows a wide road lined on both sides with three-storey buildings of a uniform appearance.  He could not have been further from the meadows and forests of Jølster!

A HIDDEN GEM
On the 7th of January Astrup wrote a letter to his wife, Engel, which gives us an idea of his movements.  He was principally concerned to visit the great art collections, and his impressions of these will be described below.  But he also walked across Hyde Park, which he considered beautiful, as, incidentally, had an earlier visitor from abroad, Camille Pissarro, who in 1890 painted a stunning vision of a tree-lined sunlit avenue.  And he had the good fortune to discover Leighton House, a hidden gem that quite possibly he stumbled across by chance. 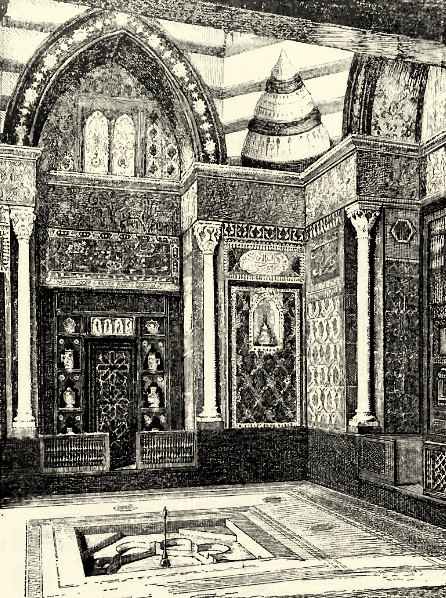 The Arab Hall in Leighton House in Holland Park.  Image in The Life and Work of Sir Frederick Leighton (1886) page 28.

Although this delightful museum in Holland Park was only opened to the public in 1929, anyone with artistic credentials was given access.  The house had been built in the 1860s for the painter and sculptor Frederic Leighton, and, although its collection of Victorian works was remarkable, what chiefly impressed Astrup was the Orientalist design of the interior by the architect George Aitchison.  How refreshing!  Rather than bombard Engel with an inventory of paintings by the Pre-Raphaelites, whom he did not especially admire, he commented on the fine carpets and marble columns, the high vaulted ceilings, the orange trees in large pots, and the pond and fountain in the middle of the Arab Hall.  Oddly, he did not mention the tiles for which Leighton House is renowned, but one cannot imagine that he would have failed to appreciate these beautiful examples of Islamic art.

A RICH HAUL
Astrup’s response to the art collections has survived not only in his letters to Engel and Lund but also in the notes he made as he walked round the galleries.  From these sources we learn that he visited the National Gallery, the Victoria and Albert Museum, and the recently opened Tate Gallery, which in 1908 was still the National Gallery of British Art.  As well as recording the names of individual painters, and in some cases the titles of their paintings, he captured impressions of colour and form, scribbling these details down in a sort of breathless shorthand.  Here and there he made rough sketches to accompany his written descriptions. 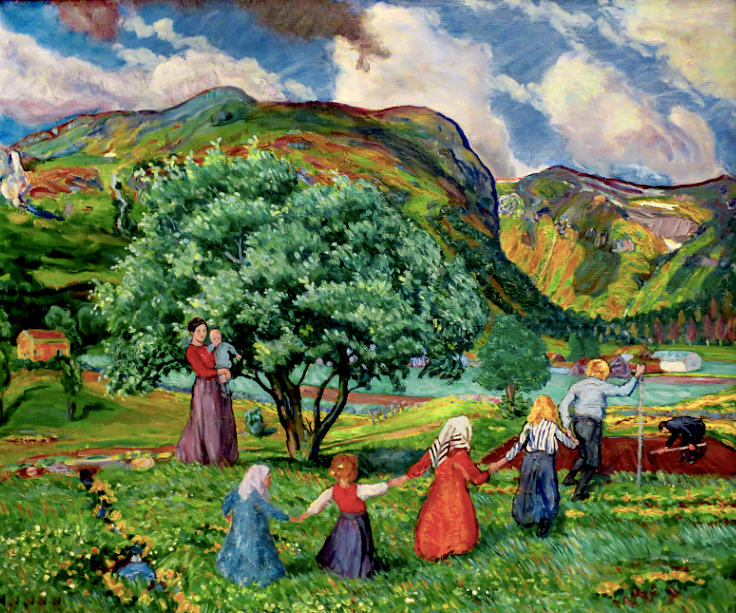 Children playing in a summer landscape by Nikolai Astrup.  Dated 1913.

Without very much difficulty we can see what Astrup liked, and, equally interestingly, what he dismissed.  He admired the Reynolds in the National Gallery, but in general he had little interest in the art of earlier periods.  Instead he discovered a rich haul of appealing eighteenth-century work in the Victoria and Albert Museum, where he made notes on the landscapes of Richard Wilson and William Collins, with whom he shared a powerful response to nature. 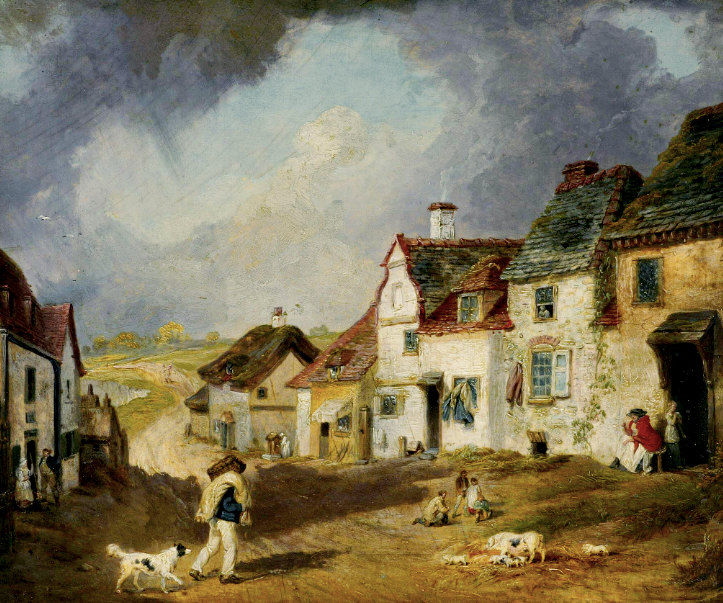 A view of the village and coast of Pegwell Bay in Kent by James Ward.  © Victoria and Albert Museum

He would also have seen George Heming Mason’s painting of a country wedding, which can be compared in both theme and design to one of his own images, in which children are seen playing in a rural setting.  Similarly, when we consider Astrup’s skill in depicting sky and cloud, we can understand why he noted James Ward’s charming view of Pegwell Bay, with its finely observed rendition of light.

A view of St Donat’s Castle in Glamorganshire, with bulls fighting in the foreground, by James Ward.  Dated 1803.  © Victoria and Albert Museum

Another of Ward’s paintings that caught Astrup’s eye was the extraordinary scene of fighting bulls.  There is something nightmarish about it, and indeed Astrup injected fantastical elements into his own paintings, a striking example being the willow tree, shown below, that metamorphoses into a troll.  He saw similar flights of imagination in the work of the Swiss symbolist painter Arnold Böcklin, and indeed in Turner.  His assessment of Turner was slightly muted, and it is clear that he preferred Böcklin, whom he found more instinctual, and more primal.  Nor could he summon any great enthusiasm for the Pre-Raphaelites, who were splendidly represented in the Tate.  Indeed, the painter who consistently won his approval, and to whom he devoted most space in his letters and notes, was Constable. 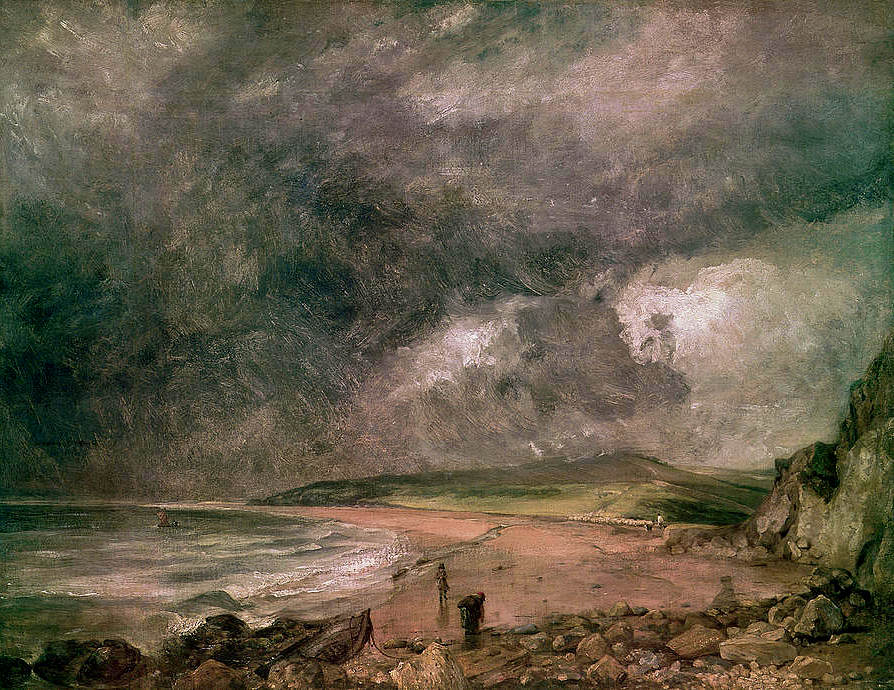 THE FINEST ENGLISH PAINTER
Astrup had already seen and admired Constable’s view of storm clouds approaching Weymouth Bay in the Louvre during his time in Paris.  The colours reminded him of western Norway, and it was above all Constable’s mastery of colour that made him, in Astrup’s estimation, the finest English painter.  The clouds in one image are rendered in “lovely silky grey-blue” tones, while the leaves on the trees in another are “a uniform dark vermilion-green” set against “a grey-violet atmosphere”.

The view of Gillingham Mill in the Victoria and Albert Museum, which Astrup considered the loveliest of Constable’s paintings, was described in equally lyrical terms, while his abbreviated notes on an oil sketch of a double rainbow combine intensity of emotional engagement with a forensic precision: 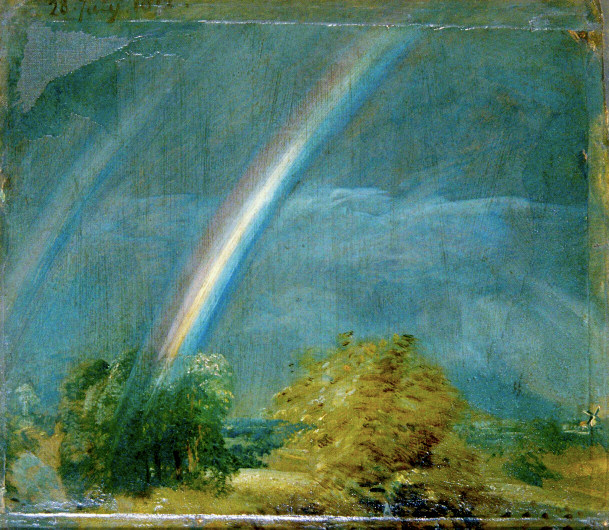 A double arch until it disappears entirely in blue at the bottom.  Wine-red pale alizarin crimson and blue at top of background.  Cold blue-green like a winter landscape in pale moonlight.  Or like glaciers in moonlight.  Damp.  Rainy.

Astrup’s appreciation of Constable’s skill in painting rainbows may go beyond these written plaudits, for several of these beautiful atmospheric effects appear in his own Norwegian landscapes.

A FRIGHTENING DREAM
In the end, though, he grew tired of London.  The smoky air disagreed with him, and he became unwell after sitting in the draughty library at the Victoria and Albert Museum.  He seemed to eat nothing but ham and eggs and undercooked steak, which had little appeal.  He found a restaurant that served fish, but it was a long way from Liverpool Street, and he could only afford to eat there once a week.  He was shocked at how much everything cost.  “I have looked into other hotels,” he complained to Engel, “but the price is the same—or even more expensive.” 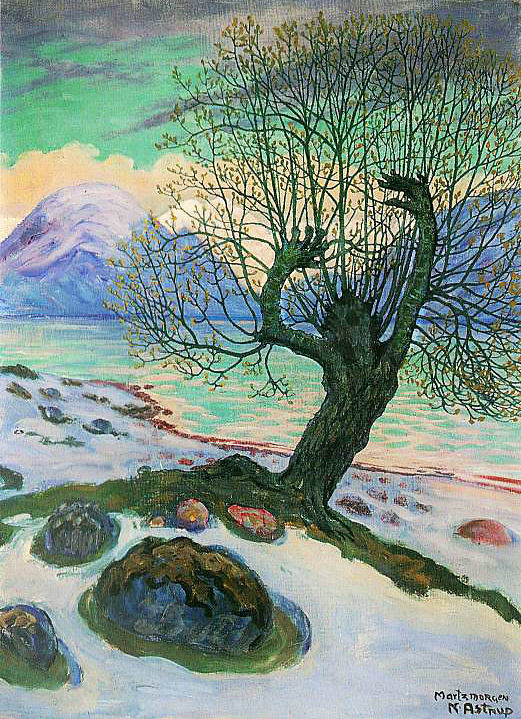 Metamorphosis of a willow tree into a troll by Nikolai Astrup.  Dated c.1920.

And he missed Engel, to whom he was devoted.  One night he lay awake worrying that something might have happened to her.  He was suddenly aware of how far he was from home, how cut off from his family:

So I lay there dreaming frightening dreams.  I dreamed that mother was dead and we were planning a funeral and when I arrived home it turned out that I had received the wrong message and that it was you who were dead.  Well, thank goodness that it is not so and that you are healthy and fit.

Here, perhaps, we glimpse a preoccupation with death that had its roots not only in the darkness of traditional folklore, but also in Astrup’s sense of his own frailty.  He was dogged by ill health, and when he died of pneumonia, in 1928, he was only forty-seven years old.

But for all the discomforts of his temporary life in London, he managed to find snatches of beauty.  After visiting the Victoria and Albert Museum he walked in Kensington Gardens, where he saw a thrush building its nest in a tree.  Listening to its song he thought of spring, in Norway, when he would be home.  “I shall see my lovely little Engel again,” he wrote.  In his fond imagination the fields were a lovely pale green, the sprouting grass just beginning to grow.  How beautifully Constable would have painted that scene!  How beautifully Astrup himself painted it, many times over!