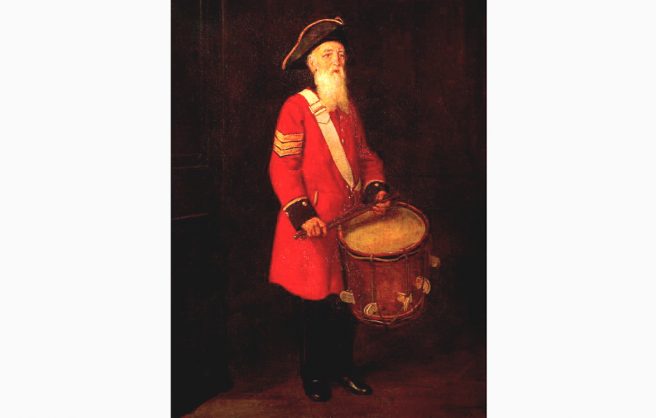 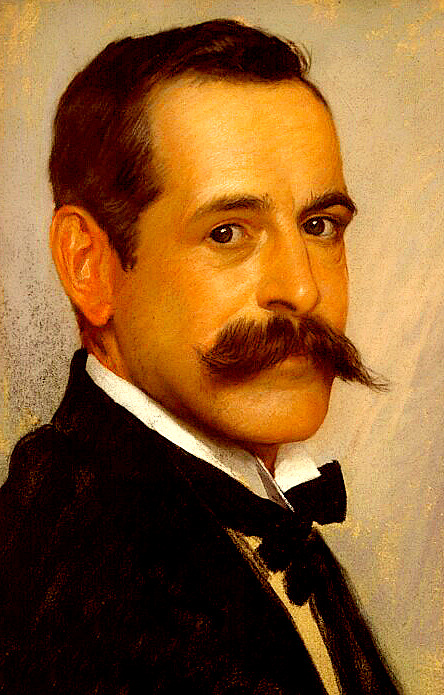 A while ago I wrote about the artist George Percy Jacomb-Hood in an article that can be found on the London Overlooked website by following this link.  Jacomb-Hood, who was born in 1857, was as versatile as he was talented, and his output ranged from society portraits to illustrations for the Graphic.  One minute he was working on Andrew Lang’s The Blue Fairy Book, the next on Leopold Hartley Grindon’s History of Lancashire.  Seemingly he could turn his hand to anything.

One of Jacomb-Hood’s most intriguing works is a portrait in oils of a Chelsea Pensioner by the name of Henry Gribble.  The portrait, which was painted in 1921, was presented to the Royal Hospital, where Gribble spent the last eleven years of his life.  He cuts a fine figure, complete with flowing white beard, black tricorne hat and scarlet coat.  The title identifies him as a “sergeant drummer”, and he does indeed have three gold chevrons on his right sleeve, and a side drum attached to a white sling that sits on his right shoulder.  In his hands he is holding two drumsticks, the tools, as it were, of his trade.

A VERY RAW RECRUIT
Henry Gribble was born in 1855 in the St Giles district of the Victorian capital.  His father, also Henry Gribble, came from Exeter, and worked as a bricklayer.  His mother, Sarah Street, was described rather mysteriously as a “dealer” in the 1861 census, and the only certain information we have about her was that she was Irish.  As for young Henry, when he enlisted in 1869, at the age of fourteen, he gave his occupation as musician. 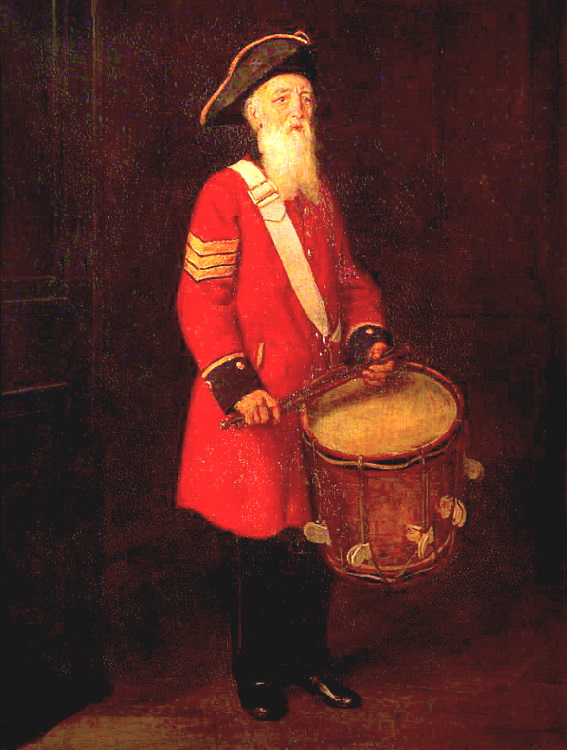 We cannot really be sure what lay behind this claim, and, although it is possible that he had received some sort of musical schooling, it may simply be that he had a leaning in that direction.  We do know, though, that within two years of his enlistment he was appointed a bugler, and that in almost nineteen years of service he was not involved in a single campaign.  His regiment was the 60th King’s Royal Rifles, and on the 3rd of December 1869, in Aldershot, he was recruited for the 4th Battalion.

His enlistment documents give a remarkable picture of this juvenile recruit, who was some way off the minimum age requirement for regular soldiers, and would not have been taken by the army, at least not officially, in any other capacity than that of trainee bandsman.  For the first few years he was ranked “boy”, only becoming “private” on reaching the age of seventeen.  He was still small—only four feet four-and-three-quarter inches—but he showed good muscular development.  His chest measured a little over twenty-six inches, and he weighed a mere sixty-five pounds.  He had light brown hair, grey eyes, and a light complexion.  He had been marked by smallpox, and carried a scar on the back of his right calf, but in general he was in fine fettle, with a pulse of one hundred beats and a respiration rate of twenty breaths per minute.  Sadly, his educational attainment was third class. 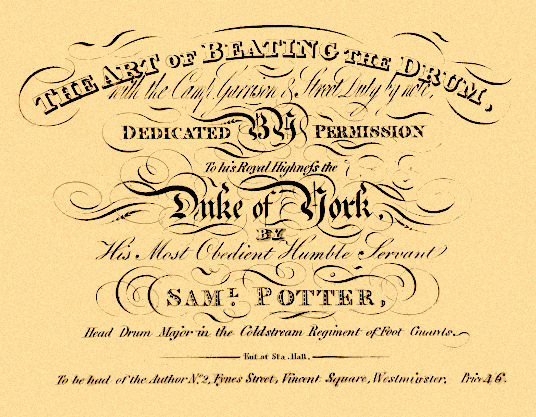 Title page of The Art of Beating the Drum by Samuel Potter, published in 1817.  © British Library

LEARNING LEFT FROM RIGHT
Some might think it odd that a man who had been a bugler should be portrayed as a drummer, but we are probably not far off the mark if we assume that Gribble, as a member of the regimental band, was instructed in the use of the drum for ceremonial purposes.  If so, his instruction would very likely have followed the method prescribed by Samuel Potter in The Art of Beating the Drum, which was published in 1817.  Potter, who was a drum major in the band of the Coldstream Guards, made it absolutely clear that military music called for military discipline, and his manual opened with the following stern command:

The first thing previous to a Boy practising on the Drum is to place him perfectly upright, and place his left Heel in the hollow of the right Foot, then put the Drum sticks into his Hands, the right Hand stick to be grasp’d with the whole Hand about two inches and a half from the Top (or more if requir’d) as Drum sticks are not all of the same Weight; similar to grasping a Sword or Stick when going to play Back-sword.

The drumming technique involved learning a range of patterns and their variations.  The essential pattern was the roll, which utilised varying numbers of strokes.  In addition the trainee had to master flams—the left and right sticks striking in rapid succession—and drags—two light strokes with the left followed by a heavy stroke with the right— and paradiddles—left right left left or right left right right—not to mention flam paradiddles and drag paradiddles and even flam and drag paradiddles.

TO INDIA AND BACK
From 1869 to 1874 the 4th Battalion moved around England from one army base to another.  Then in 1875 it was sent over to Ireland, where in November 1876 it went on board HMS Serapis, an iron-hulled troopship bound for India.  The Cork Daily Herald witnessed the riflemen arriving by train in Queenstown—now Cobh—from the barracks at Fermoy.  At the terminus of the Great Southern and Western Railway they were greeted by the bands of the 77th and 95th Regiments, which must have delighted Private Henry Gribble, who was now a young man of twenty-one.  They tramped through the streets down to Hargreave’s Quay, where they were ferried out to the awaiting troopship courtesy of the Citizens’ River Steamers Company, which

was a spectacle worth looking at, as the long dark-green column four deep, composed of well set-up and compact soldiers in the full vigour of youth, and headed by two splendid bands in scarlet uniforms, marched down to the steamers.

The reporter for the Herald, clearly moved by the occasion, noted approvingly that the embarkation was carried out smoothly, that the battalion acquitted itself admirably, and that not a single man was disorderly or under the influence of drink. 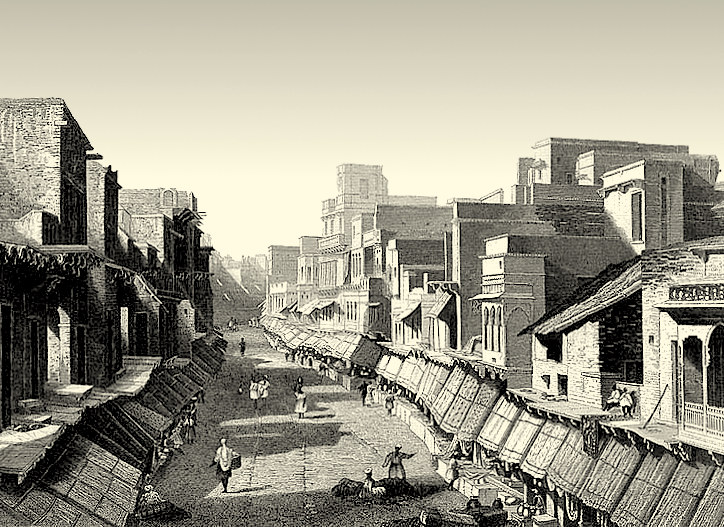 Early in December the Serapis reached Bombay—now Mumbai—from where the battalion went overland to Agra in the north west of the country.  A year later, still in Agra, Gribble re-enlisted in order to extend his service from its original twelve years to twenty-one, receiving a gratuity of sixty rupees, which would have been worth about five pounds, or roughly three months’ pay.  He travelled with the battalion to a number of stations in Punjab Province before transferring to the 2nd Battalion in 1888, and travelling back to Britain early in the same year on HMS Malabar.  He was discharged on the 24th of July at Enniskillen.  He was described as a man of very good character—even though he had twice been treated for gonorrhoea—with not a single adverse comment in his record.  He had obviously gained a few inches over the years, but even now, at five feet two, he was not what we would regard as a tall man. 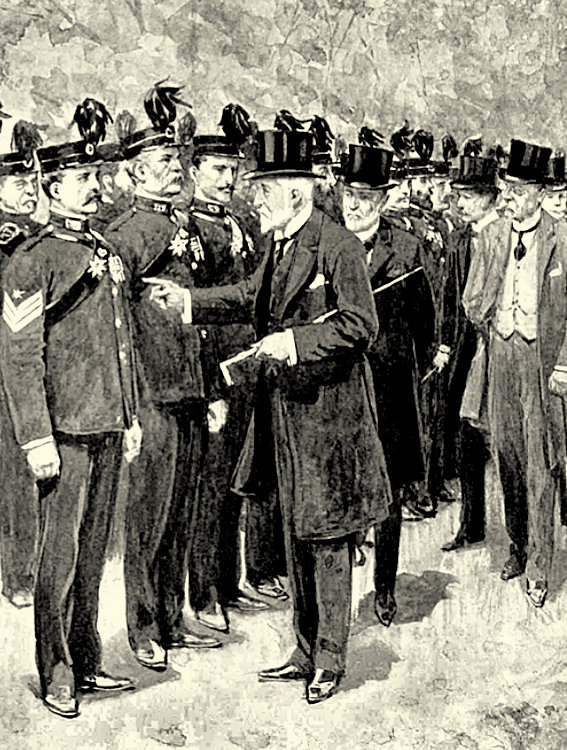 An inspection of the Corps of Commissionaires by Sir Henry Wylie Norman in the grounds of the Royal Hospital Chelsea.  Image by Ernest Prater in The Sphere 22 June 1901.

LIFE AFTER
Following his discharge Gribble joined the Corps of Commissionaires, giving his address as the Commissionaires’ Barracks at 419 Strand.  The Corps had been formed to give veterans of the armed forces meaningful employment, and its members would act as guides and couriers, night watchmen, attendants in hospitals and theatres, and so on.  In essence they made themselves available to anyone who needed an extra pair of hands.  They were uniformed and disciplined, and were required to have a clean military record.

Gribble’s official job title was “porter”—a doorkeeper—and he was employed in this capacity for well over twenty years.  In 1889, when he was in his mid-thirties, he married a woman from Northamptonshire by the name of Ellen Causebrook, and moved to Battersea.  From this point on he gave his name not as “Henry” but as “Henri”, a re-styling that probably had less to do with distant French ancestors than a desire for a rather more sophisticated image.

Things took a turn for the worse when after only ten years or so of marriage his wife died.  For a while he lived in a three-room apartment in Hampstead with his niece, Lotty Alice Causebrook, but at some point he removed to Towcester, the Northamptonshire town that was the home of the Causebrook family.  But he was finding life difficult, and in the spring of 1913 he was admitted to the Royal Hospital.  The years passed.  In 1921, as we know, he was painted by Jacomb-Hood.  And then on the 21st of February 1924, at the age of sixty-eight, he died. 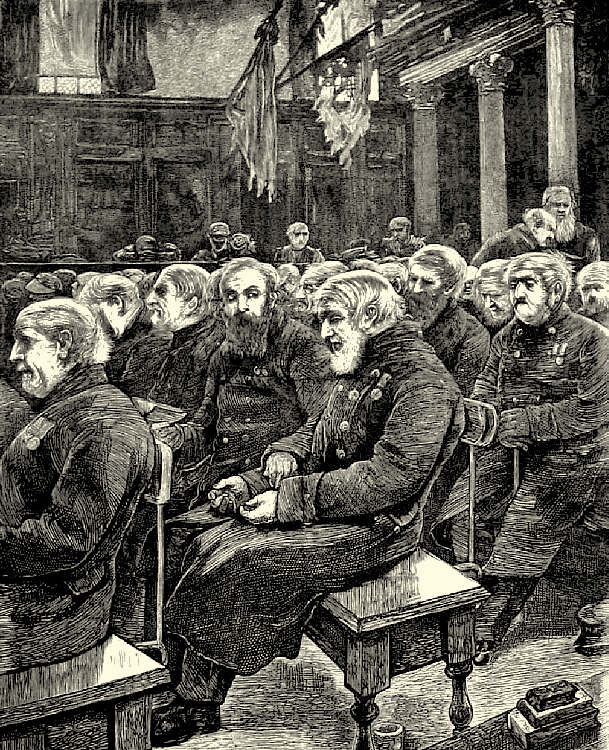 Wood engraving of a Sunday service at the Royal Hospital Chelsea.  Image by Hubert von Herkomer in The Graphic 18 February 1871.

FOR THE LAST TIME
The Chelsea Pensioners were as revered then as they are now as examples of selfless devotion to the nation.  A remarkable example of their iconic status is Hubert von Herkomer’s 1875 painting The Last Muster.  The image, which had first appeared in 1871 in a less developed form as an illustration in the Graphic, offers a fine view of a Sunday morning service.  But its emotional power derives from the detail of the old soldier sitting in the second pew, at the end that directly faces the viewer.  For him the gathering in the chapel is indeed the last muster, and the concerned look on the face of his neighbour, who is anxiously checking his pulse, makes it clear that he has just died. 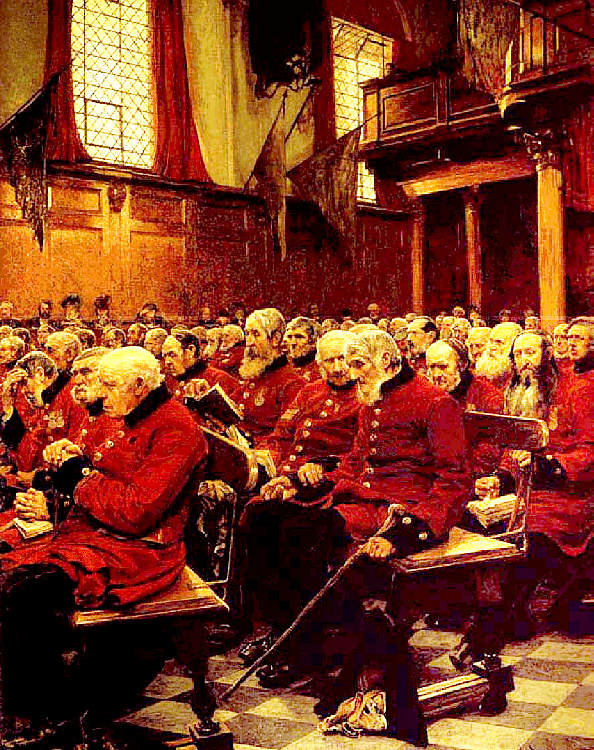 Herkomer’s beautiful painting, which he exhibited at the Royal Academy, was long remembered, and certainly long enough to be compared with Jacomb-Hood’s attempts at the theme.  Indeed, when Jacomb-Hood exhibited a Chelsea Pensioners at Home at the Royal Academy in 1905, he was castigated by the art critic of The Truth for placing himself in unnecessary competition with his illustrious predecessor.  But it was a theme dear to his heart, and at the same exhibition he hung a picture of pensioners playing a game of pool.  Many years later, in 1922, he added a Room in the Governor’s House to his series of Royal Hospital paintings, which of course included the 1921 portrait of Henry Gribble.

A DIGNIFIED OLD SOLDIER
We need not look far for a reason for Jacomb-Hood’s interest in the Hospital and its residents.  For many years he lived only a stone’s throw away in Tite Street.  There in his Chelsea studio he established a reputation as an accomplished artist, and it is perfectly possible that his portraits of the pensioners were commissioned.  Even if that was not the case, we can easily imagine that he sought permission to paint the dignified old soldiers who would have been a familiar and much loved sight in the streets of Chelsea. 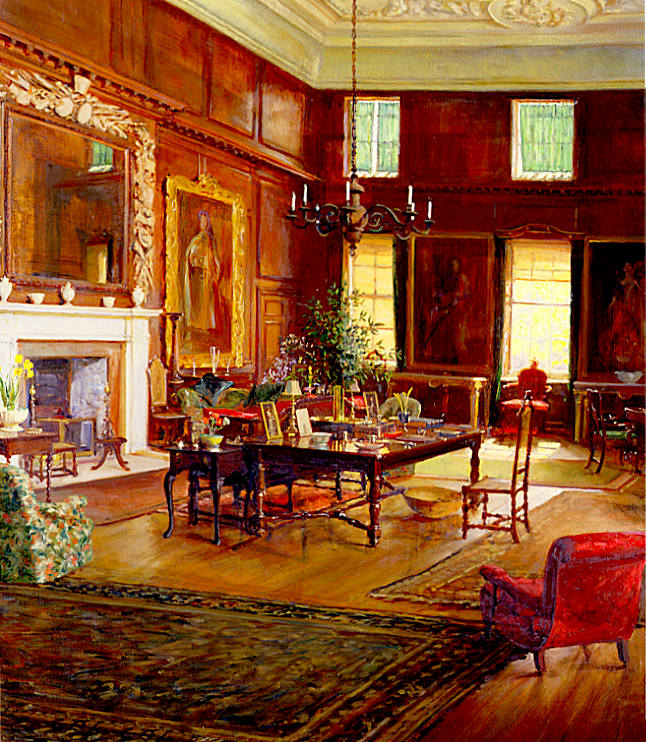 View of the State Room in the Governor’s House at the Royal Hospital Chelsea by Jacomb-Hood.  Oil painting dated 1922.  © The Harris

And why Henry Gribble?  We just do not know.  Gribble might have had some standing among the pensioners for reasons we can only guess.  Then again he might have been chosen simply as representative of army musicians—as an old fellow with a soldierly bearing and a face full of character.  Never mind.  Jacomb-Hood has left us a sympathetic portrait, and a reminder that images of “other ranks” are able to stand, as it were shoulder to shoulder, with those of the top brass.  Gribble may not have been a member of the military elite, but he made his mark.  Not bad for a poor boy from the back streets of St Giles!

The Mysterious Miss Muir: Actress and Model or Soldier and Thief?

Shoes and Ships, or, The Story of Marcus Worley