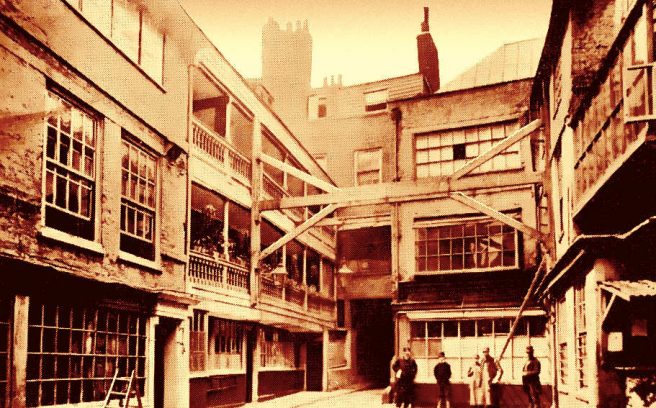 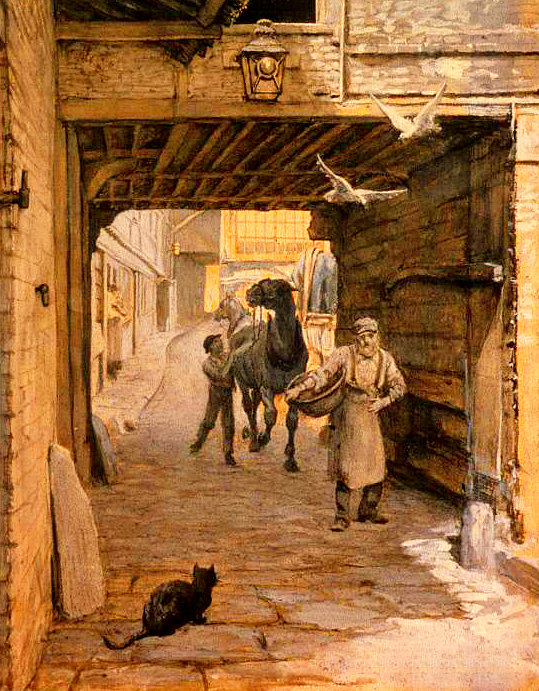 View of the inner yard of the George Inn in Southwark by George Jacomb-Hood.  Drawing dated 1865.

One of the more curious items in the heritage collections of Southwark Council is a drawing of the inner yard of the George Inn.  The drawing was executed in May 1865 by George Percy Jacomb-Hood—more of whom later—and it is about ten inches in height and seven and three-quarters in width.

The view is of the entrance to a coach yard, with two ostlers tending to a pair of horses.  To the left of the entrance a cat sits on the flagstones with its back to us, watching the proceedings, while two birds fly across the picture from the right.  The eye is drawn through the entrance to the yard itself, which is bathed in light. 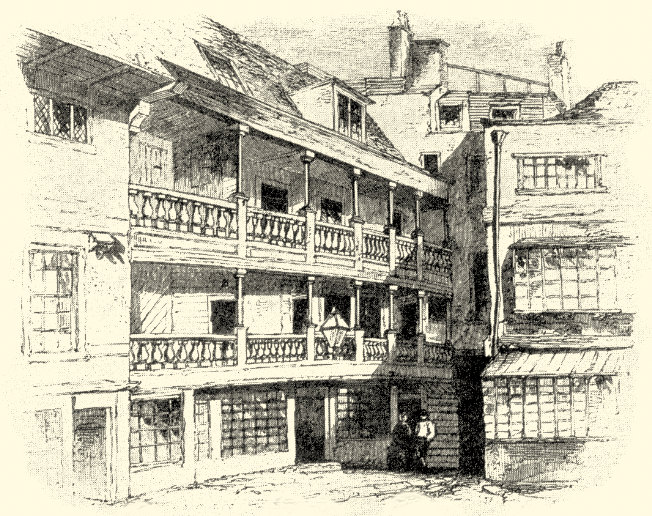 MAHOGANY THIS MAHOGANY THAT
The George, which still stands, is London’s only surviving galleried coaching inn.  On old maps one finds it lodged between White Hart Yard to the north and Talbot Yard to the south, both yards issuing into Borough High Street, which becomes Wellington Street before crossing the river over London Bridge.  Time was when it was only one of many such establishments in Southwark, all of which served the needs of travellers heading out of the capital along the great coaching routes.  In order to experience the George as it was in the days of Jacomb-Hood, one can do worse than leaf through a little monograph written by one Bertram Waldrom Matz, which was published in 1918.  Matz was a writer with a strong interest in Charles Dickens, and an editor of The Dickensian from 1905 to 1925, and he was fond of the George, which, along with Southwark generally, seemed to him to occupy an important space in the imaginative landscape of the great novelist. 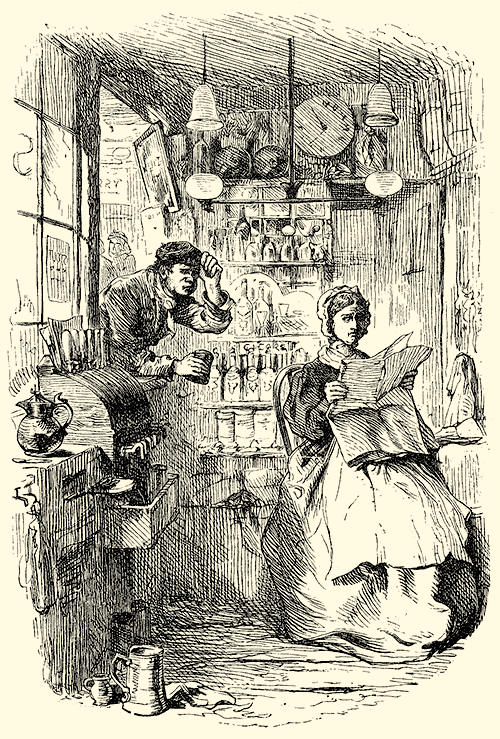 Miss Abbey Potterson and customer at the bar of the Six Jolly Fellowship-Porters.  Image by Marcus Stone in Charles Dickens Our Mutual Friend (1865) between pages 52 and 53.

Indeed, when Matz describes the interior of the inn, he is quick to make illuminating references.  The bar parlour, with its pewter pots and mahogany pulls, its polished casks and horse pistols, reminds him irresistibly of the equivalent room in the Six Jolly Fellowship-Porters in Our Mutual Friend.  The coffee-room is

such as the Pickwickians and their ancestors revelled in.  The same old box compartments with their mahogany tables, seats and high-backed partitions; mahogany sideboards and occasional tables, where the joints are placed at meal-times; mahogany chairs with horse-hair seats to pull round the fire on winter days; casement windows, T-shaped gas jets, old prints; to say nothing of the red cord bell-rope still in working order by the side of the fireplace.

In a similar vein Matz lovingly describes the wood pannelling and sawdust floor of the tap-room, the old-fashioned roasting-jack in the kitchen, the deal tables and plate warmer.  In his mind’s eye he can see and hear the garrulous coachmen of the past—“the Tony Wellers of his day and before”—smoking their long clay pipes and downing beer from tankards. 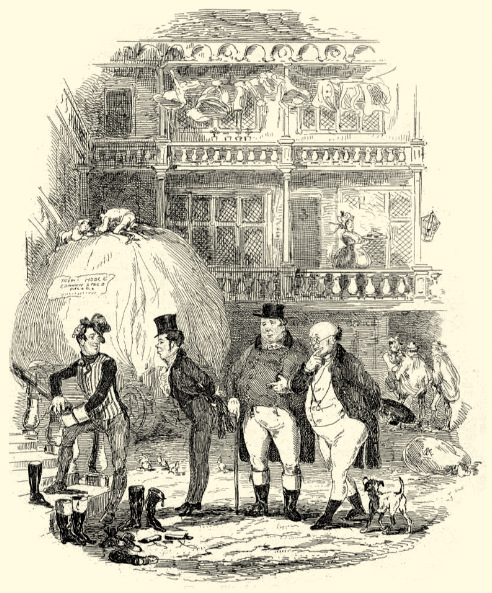 Sam Weller “engaged in burnishing a pair of painted tops” at the White Hart Inn.  Image by Hablot Knight Browne, better known as “Phiz”, in Charles Dickens The Pickwick Papers (1837) between pages 94 and 95.

FLITTING GHOSTS
Matz also gives an amusing account of clubs that patronised the George.  The Four O’Clockers, a group of local businessmen, dined there every day for almost thirty years, its wine-bill paid in part from the fines foisted on any member who turned up late for dinner, which was served, hardly surprisingly, at four o’clock.  The Old Chums, also businessmen, met for dinner on the first Saturday in each year, their ranks becoming depleted at the time of the Great War, when the tradition was just kept alive by a solitary member who on Saturday the 5th of January 1918 invited his wife to dine with him.  On one occasion members of The Most Secret Brotherhood of the Rolling Stones were ordered to present themselves at the George at exactly thirty-one minutes past seven, knocking at the door three times, and gaining admission to the meeting room by means of agreed signs.  Other clubs and societies listed by Matz, who obviously had an ear for the music of peculiar names, are 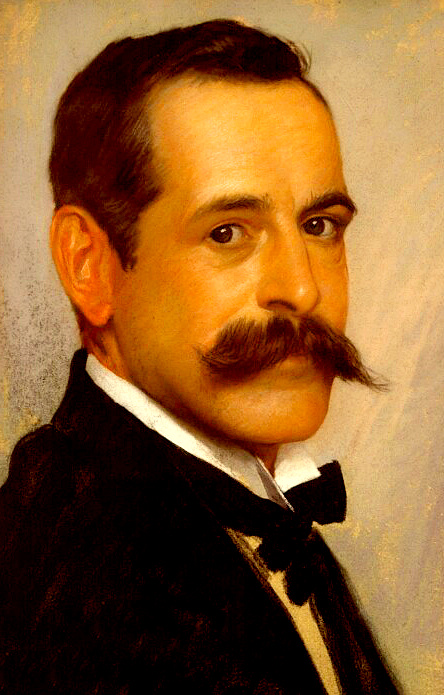 The Selborne Society, The Cult of London, Shakespearean Society, The London Co-operative Holiday Association, The Balham Antiquarian and Natural History Society and the Dickens Fellowship, the members of which, after visiting the many historic places of interest in the neighbourhood, bring their rambles to a fitting and appropriate end within the walls of the famous Inn.

On the subject of The Pickwick Papers Matz has little patience with the suggestion that the White Hart Inn, where Sam Weller makes his first appearance in Chapter Ten, was closely modelled on the George.  There is only one direct reference to the George in the novels—from Maggy in Chapter Twenty-Two of Little Dorrit—and there was in any case a real White Hart in the nearby White Hart Yard!  Even so it is not hard to “see” Sam Weller among the other ghosts that flitted through the fine old coaching inn whenever aficionados of the novelist stopped there for a drink, or a meal, or a night’s stay. 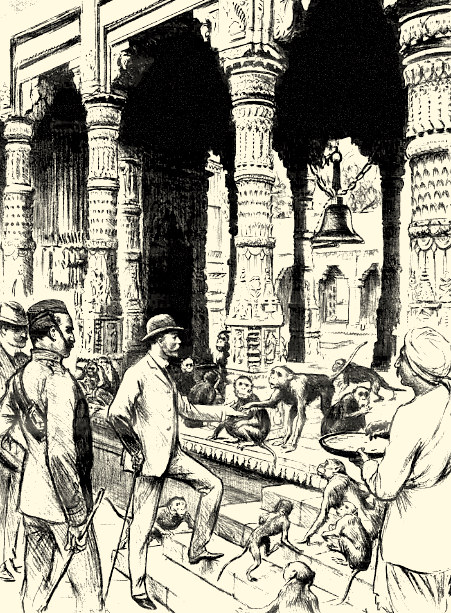 The Prince of Wales visiting the Monkey Temple at Benares.  Image by Jacomb-Hood in The Graphic 24 March 1906.

JACOMB-HOOD
But to return to the subject with which we began.  George Percy Jacomb-Hood, the creator of the drawing of the George, was born in 1857 in Redhill in Surrey.  His father, Robert Jacomb-Hood, was a prominent railway engineer.  His mother, Jane Stothard Littlewood, was the daughter of a printer, George Littlewood.  He won a scholarship to the Slade School of Fine Art to study under Edward John Poynter and Alphonse Legros, following which he travelled to Madrid, again with a scholarship, and to Paris, where he gained further experience under Jean-Paul Laurens and John Lavery.

He was closely associated with the artistic mainstream, living and working at fashionable addresses in Kensington and Chelsea.  He was a friend of Whistler and a horse-riding companion of Sargent, and he developed a fine reputation as a portrait painter.  He was comfortable in high society—when he was in his fifties he married the daughter of the 8th Baron de Hochepied Larpent—and in 1911 he recorded the royal investiture ceremony in Delhi. 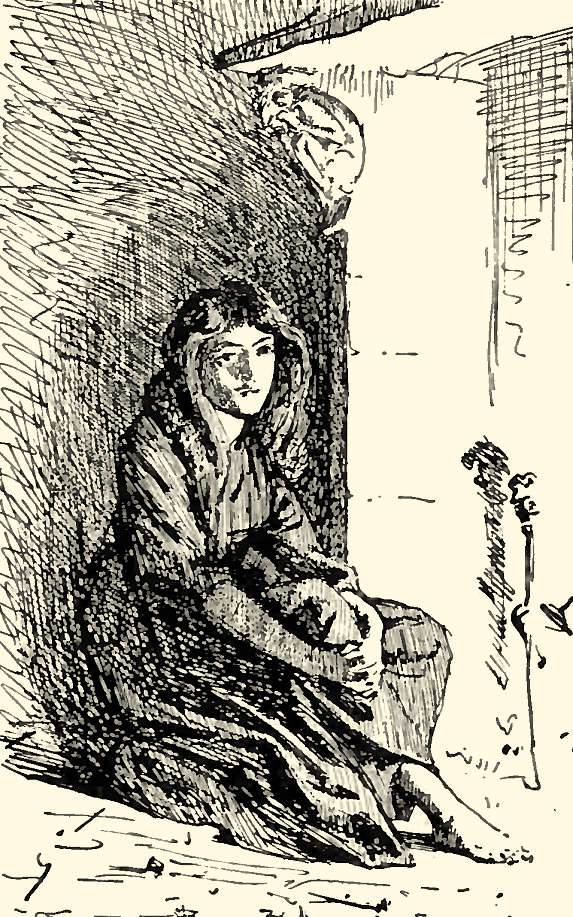 Cinderella sitting by the chimney among the ashes.  Image by Jacomb-Hood in Andrew Lang The Blue Fairy Book (1889) page 65.

In fact Jacomb-Hood covered a number of royal visits to India as an artist-correspondent of the The Graphic, and the front-cover image of the Prince of Wales on the tour of 1906 is a good example of his illustrative style.  Elsewhere, and in marked contrast to these high-profile commissions, he worked as a book illustrator, and some of his finest images are in that children’s staple, The Blue Fairy Book.  His enchanting Cinderella—to take just one example—captures wonderfully the aching unhappiness of the forsaken girl.

Jacomb-Hood exploited this sympathetic quality in a remarkable collaboration with Leopold Hartley Grindon in the 1890s.  Grindon was known principally for his many books on botany, but his writing embraced such diverse subjects as the world of Manchester bankers and the nature of figurative language.  But the publication we are interested in here was a descriptive history of the county of Lancashire, which not only allowed Grindon to bring together his wide-ranging interests, but also gave Jacomb-Hood, who was one of several contributing illustrators, an opportunity to employ a social realist style that rivals the best work of Luke Fildes and Hubert von Herkomer.  (For the link between Herkomer and Jacomb-Hood, see my article on the portrait of Sergeant Drummer Gribble.)  His heroic images of working-class men and women achieve a wonderful synthesis of the physical splendour of his subjects with the grittiness an poverty of their surroundings. 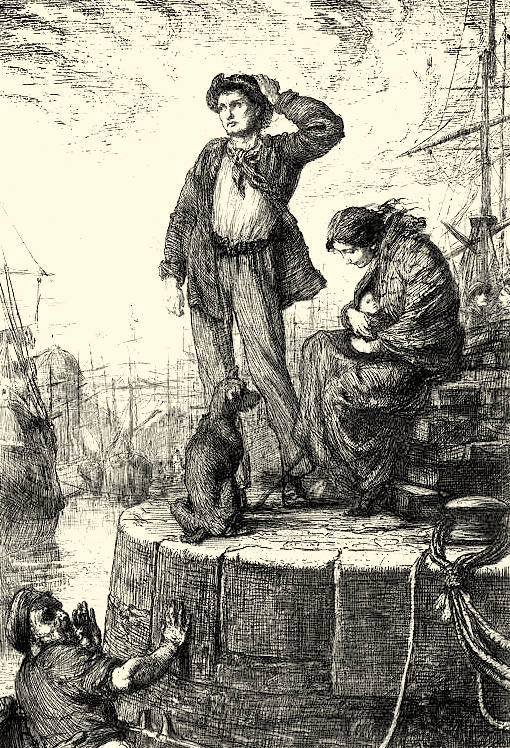 OLD OLD OLD
By the time Jacomb-Hood died, in 1929, the George Inn had submitted to the deleterious effects of progress.  In 1849 it was sold to the trustees of Guy’s Hospital, its neighbour.  Later, in 1874, it was bought by the Great Northern Railway Company for a sum in the region of eleven thousand pounds.  A portion of the building was destroyed to make room for a receiving-house, where a hundred tons of goods were weighed every day.

However, the work of destruction was never completed, and the George lived on, albeit maimed, where other coaching inns disappeared without trace.  Bertram Waldrom Matz, who dearly loved the inn and all that it stood for, finds many apt phrases.  “The last of its race.”  “An unspoiled survival”—for all the efforts of the demolishers—“of old London.”   “The rendezvous of a continual flow of literary and antiquarian enthusiasts.”

But for his definitive comment on the unique charm of the Southwark hostelry Matz resorts to a literary reference.  In Act One of She Stoops to Conquer Goldsmith introduces Mr Hardcastle as a man who loves

According to Matz it is this attachment to the past, and to its faded glories, that explains the very special appeal of a building that still serves as a reminder of a bygone age.

Peckham Past, or, Images of Basing Manor