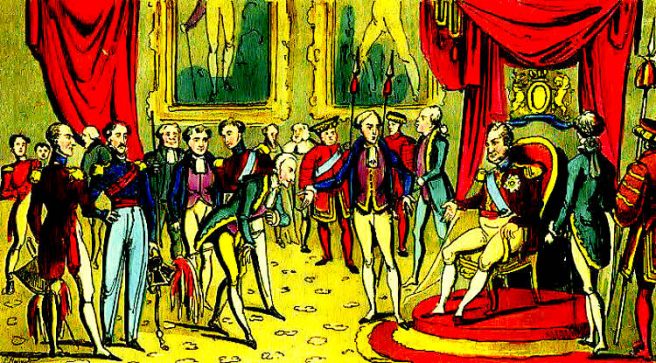 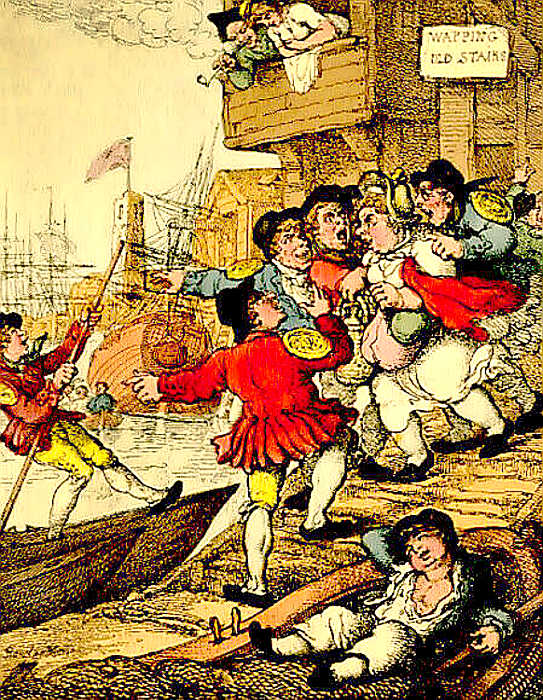 One of the strangest stories in the long history of investiture must be the knighting of Francis Columbine Daniel early in the reign of George IV.  The occasion was marked with the usual pomp and ceremony, and was widely reported in the newspapers.  However, not everything was quite what it seemed, and not everyone was impressed.

So who was the splendidly named Francis Columbine Daniel?  And what was his achievement?  We at London Overlooked have been investigating.

MASON AND INVENTOR
Daniel was born in King’s Lynn in Norfolk in 1765.  His father, Robert Daniel, was a native of Edinburgh whose own father had fallen fighting the Jacobite cause in the Rising of 1745, and his mother, Anne Columbine, belonged to a distinguished Huguenot family.  He trained as a surgeon and apothecary, setting himself up in a practice in Wapping, where, incidentally, he became a member of the local masonic lodges.

Given that Daniel was living down by the London docks, it is no surprise that he took a close interest in naval medicine, designing a medicine chest, and writing a pamphlet with “plain and practical directions on the most frequent diseases incident to seamen”.  Although London Overlooked has not located a copy of the pamphlet, it no doubt had much the same information as, say, Henry H Gregory’s Companion to the Sea-Medicine Chest, in which various medicinal preparations are recommended for tackling every conceivable marine ailment, from sea-sickness and sunstroke to dysentery and hepatitis.  Daniel claimed in the Memoir he published in 1821 that his designs were adopted by Dr Richard Reece of Medical Hall at 170 Piccadilly, a renowned physician who was patronised by the gentry and nobility.  This may well be true, although it should be pointed out that a number of Daniel’s claims need to be treated with very great caution. 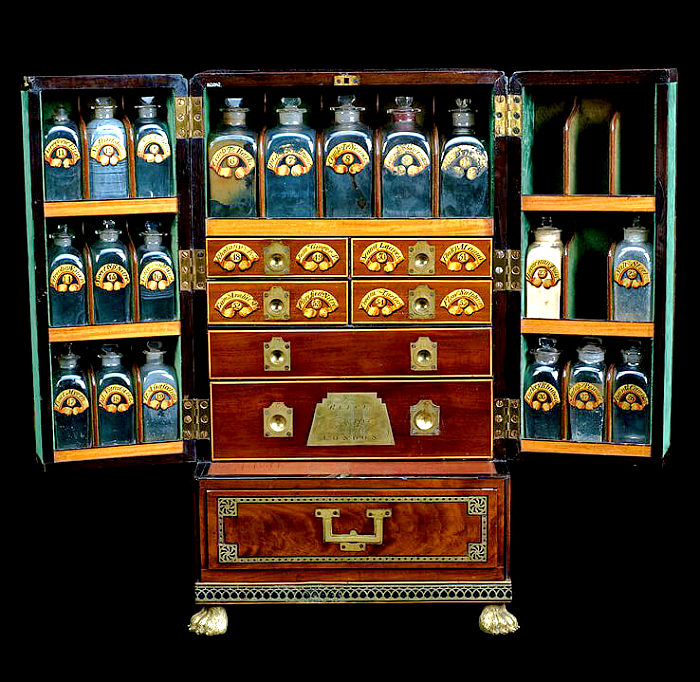 But it was the invention of his life preserver—or “air jacket”—that established his reputation.  He presented the preserver at the 1806 anniversary meeting of the Royal Humane Society, the charity that had been founded in 1774 to promote the prevention of deaths by drowning or asphyxiation.  The report on the meeting described a waterproof leather jacket, small enough to be carried in a coat pocket, and inflated by means of a silver tube, which supposedly could be done in thirty seconds.  The wearer was able to keep head, arms and upper body entirely clear of the water, and a promotional picture showed a brave soul bobbing on the waves, kept afloat by his preserver, with his bedraggled family clustering around him.

Daniel was quick to point out the significance of his invention.  He only had to cite the large number of shipwrecks recorded in Lloyd’s Register of Ships, and to lament the “scores of poor Souls” who died at sea in what he called “the devouring Element”.  The three-odd pounds he charged his customers was a small price to pay for a device which, should they be in danger of drowning, was “literally worth more to them than all the World besides”.  There were many testimonials.  One was written by John Dickenson, who was a gentleman of Norwich.  Fortuitously equipped with a Daniel’s preserver, he had rescued himself and three companions when his pleasure boat was upended off the Norfolk coast.  Clinging to one another they had been driven by the wind to a marshy shore, where they were helped by some locals.  They were given refreshments—and dry clothes for two female companions—at a farmhouse.  Dickenson thought of it as “a singular and providential escape”, and gave Daniel free rein to publish his account as he saw fit, which he duly did. 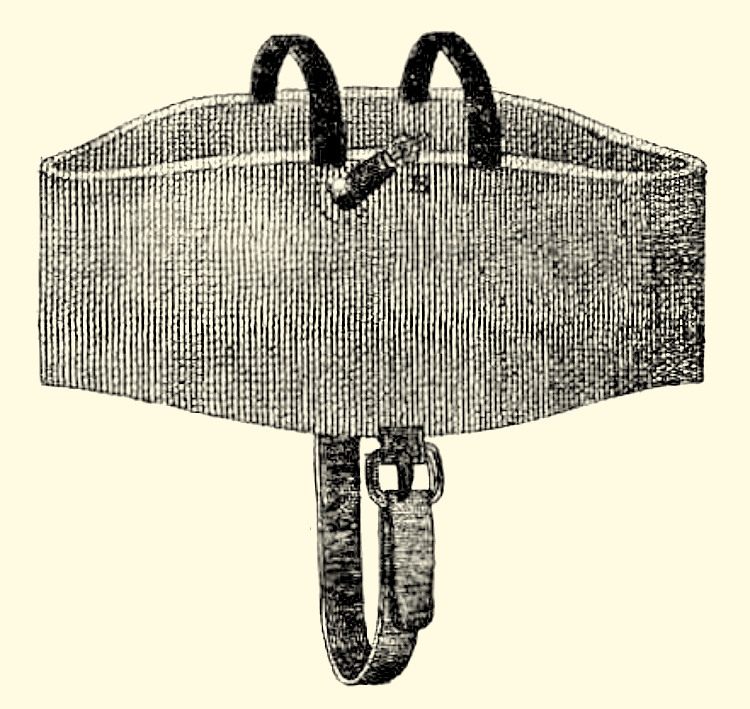 Daniel’s life preserver.  Image in The Repertory of Arts, Manufactures, and Agriculture volume 13 (1808).

But not everybody wrote of Daniel and his preserver in these glowing terms.  He was dismissed by The Royal Cornwall Gazette as a complete fraud, a “druggist from Rotherhithe” who had patented what was essentially a cork-stuffed mattress with a square hole in the middle, folded over and held in place with tape.  The Gazette took some delight in noting that Daniel poured so much time and money into promoting his product that he made himself temporarily bankrupt.  Other critics pointed out that a William Cobb had already patented an air jacket in 1764, and that similar designs had been published even earlier, by, for example, the German engineer Jacob Leupold.

TRIAL BY WATER
At this point the story of Francis Columbine Daniel takes two unexpected turns.  We begin with an incident that took place in the late summer of 1805.

At about 4 o’clock on a Thursday afternoon a crowd assembled on London Bridge, and watched in astonishment as men wearing life preservers jumped into the river from a boat at Old Swan Stairs.  They floated on the tide down through the centre arch of the bridge, and on down to Gun Dock at Wapping, all the while demonstrating freedom of movement by smoking pipes and playing the flute and the French horn.

Other such trials followed.  In July 1806, at a regatta on the river, there were men “actually walking in the water”—according to the Morning Chronicle—buoyed up by their air jackets.  Two carried large white bags on their backs with a fortnight’s supply of ship’s biscuits, while another “loaded and fired a horse Pistol several times”.  In 1807 the preserver was demonstrated in the Aquatic Theatre at Sadler’s Wells, and in 1812 on the Serpentine in Hyde Park in the presence—according to Daniel—of several thousand spectators and three members of the royal family.

ARISE SIR WHOEVER YOU ARE
The second, and scarcely credible, turn in the story took place some years later, on Wednesday the 15th of June 1820, shortly after the Prince Regent’s accession.  The occasion was a levée held at the new King’s palace in Pall Mall.

The newspapers gave a blow-by-blow account of the levee, which was attended by guards of honour, foreign ambassadors and ministers, and members of the nobility and the gentry.  In the audience was Francis Columbine Daniel.  When the moment came for the presentations—and the Morning Post reported that these were “very numerous”—the 5th Earl of De La Warr stepped forward.  The Earl was George Sackville-West, a Lord in Waiting.  He pushed Dr Daniel into the presence of the King, puffed him as the inventor of the life preserver, and, even though the doctor was not on the official list of recipients of honours, got him a knighthood.  Commenting on the extraordinary scene the Morning Chronicle observed rather solemnly that the new Knight of the Realm “had the honour to kiss his Majesty’s hand”.  In the circumstances it was the least he could do.

Presentation at the Levee on St George’s Day.  Image in Real Life in London volume 2 (1822).

Quite why Sackville-West effected this subterfuge is not known.  Could it be that freemasonry played a part?  London Overlooked is not able to comment, beyond pointing out that the 5th Earl’s eldest son, the Viscount Cantelupe, was a member of two lodges.  Was his father a Mason too?

Bogus or not, the knighting of Dr Daniel was a fait accompli, and could not be undone.  When he next appears in the newspapers, as a candidate in a Grantham election, he is “Sir Francis Colombine (sic) Daniel”, and his memoir is the memoir of “Sir F. C. Daniel, Knt. M. D.”.  However, not everyone was convinced.  Charles Dibdin the younger, for one, who had presided over Sadler’s Wells at the time of Daniel’s aquatic exhibition, dismissed him as an incurable self-publicist who received the knighthood by “attaching himself to the queue at an investiture”.

AND WHAT THEN?
Sir Daniel’s name continued to crop up in print.  He was instrumental in founding a “medical board” in Great Charlotte Street, off Blackfriars Road, with a view to combating the menace of quackery.  And he carried on inventing, devising a hernia truss which, looked at from the mechanical point of view, was probably not unlike the air jacket that had once brought him his celebrity. 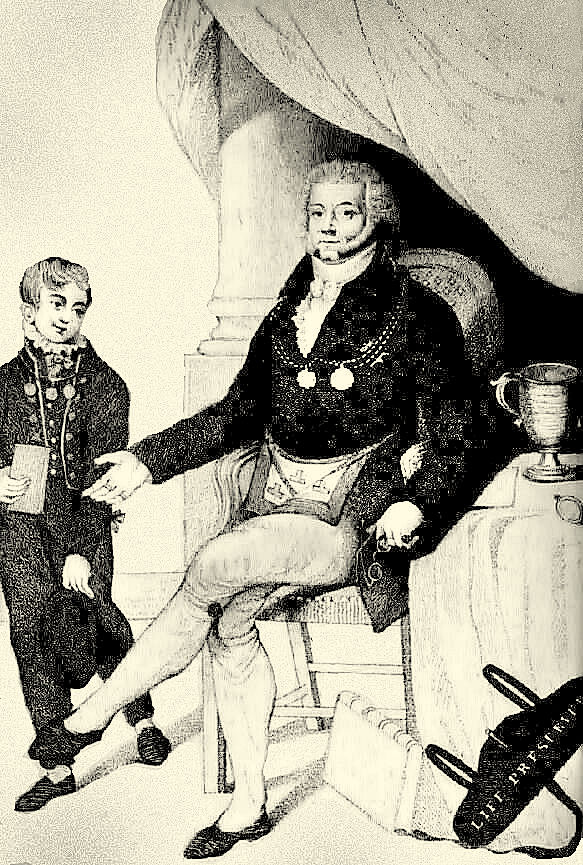 Portrait of Francis Columbine Daniel, seated, with David Humphrys, standing.  Columbine displays two medals awarded to him for the invention of the life preserver, and a Mason’s apron.  To his right is a silver cup presented to him in recognition of his services to Masonry, and beneath it is his life preserver.  Humphrys was an orphan educated by one of Daniel’s Masonic charities.  Image in Francis Columbine Daniel Memoir of Sir F C Daniel, Knt. M.D. (1821).

Oddly, his most colourful boasts concerned a passion for horses.  His favourite breed was the cream-coloured Arabian, and he owned Phenomena, a mare bred by Sir Edward Astley at Melton Park in Norfolk, which broke a succession of records for “trotting” against the stop watch.  He liked to be seen driving his phaeton, with two of his beautiful spotted dogs to keep him company, and the story goes that, when one day a child fell under his carriage as he was driving along the Hackney Road, he steered the vehicle with such skill that he was able to clatter on his way without inflicting any injury.

But after Daniel’s death in 1823 the truth—at least as others saw—came out.  A satirical poem appeared in 1826 in the Spirit of the Public Journals attacking doctors who “stole” knighthoods, and slyly suggesting that Daniel—who had a wife, Sarah, and a daughter, Anne—consorted with prostitutes.  The latter jibe soon blossomed into a fully-fledged allegation, and it was reported in The Times and other newspapers that Daniel had behaved disgracefully in public with a Mrs Elizabeth Morris, who was excessively fond of drinking, swearing, blaspheming, fighting, and dancing in an indelicate manner.  Mrs Morris had Grantham connections—she was descended on her mother’s side from the town’s most famous son, Sir Isaac Newton—which casts a tawdry shadow over Daniel’s ambitions in the politics of Lincolnshire.

In 1845 the Royal Cornwall Gazette, clearly hostile to the memory of the self-styled life-preserver, who was in fact “a life-destroyer”, blew the whistle on the medical board too.  No doubt it had been profitable, for Daniel had promoted it without restraint or shame, putting illustrated advertisements in the windows of local shops.  He even once “made a great smoke in his house” in order to publish notices in the newspapers celebrating its miraculous deliverance from destruction by fire.  But the “board” of learned professionals who received Daniel’s fee-paying patients were in fact hirelings dressed in the fine clothes of gentlemen, sitting in a panelled room painted with trompe l’oeil bookshelves.  One of these may possibly have been the Dr Nisbet who was denounced many years later as a fraud and a drunkard.

The Gazette made up its mind that Daniel was merely a quack.  Which is ironic, given that the medical board had reportedly been founded precisely to rid London of quackery!