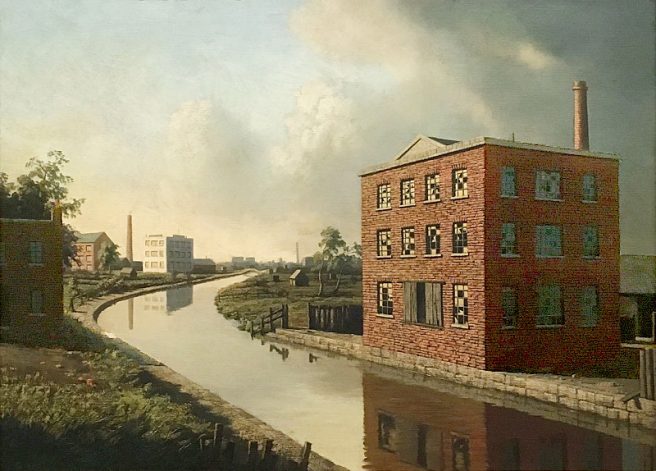 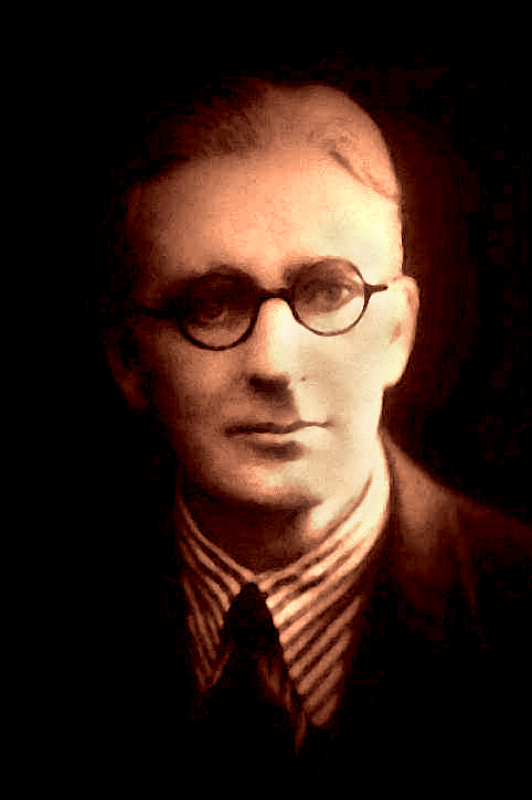 Photograph of a young Algernon Newton.

A while ago I came across a discussion on twentieth-century art.  I was interested because the painter under consideration was Algernon Newton, who has already been the subject of an article on this website, which can be accessed here.  Newton, possibly more than any other, captured the emptiness but also the strange beauty of London back streets and industrial wastelands.  He was, if you like, the painter par excellence of the overlooked corners of the capital—of London overlooked.

PLEASING DECAY
At the heart of the discussion was the striking concept of “pleasing decay”.  I understood this as an aesthetic of dilapidation, a conscious search for beauty in scenes that one would think of as being anything but beautiful.  Newton’s depictions of such subjects as the Regent’s Canal and the Grand Surrey Canal, which are as appealing to the eye as they are haunting to the imagination, illustrate the concept well. 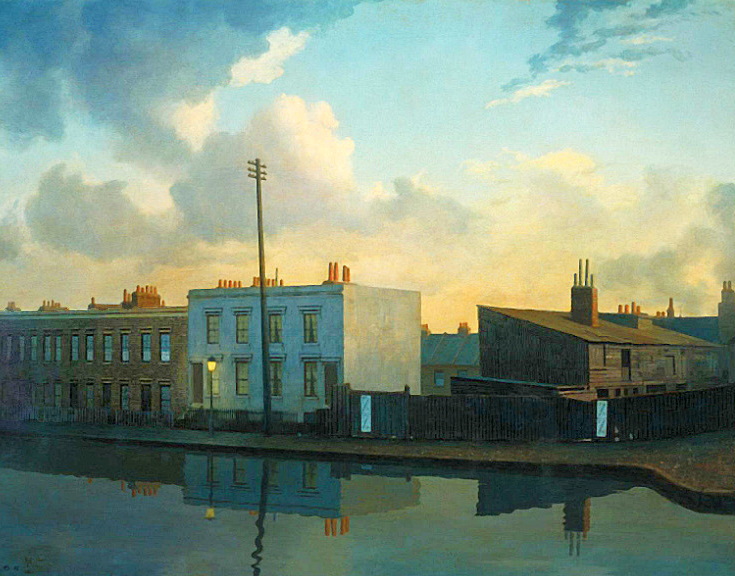 [/caption]However, he was certainly not the first artist to be drawn to tumbledown buildings and flaking plaster, and it makes some sense to see him as heir to a tradition that extends as far back as Canaletto, whose vision of Venice embraced not only the city’s majesty but also the deleterious effects of time on the very fabric of its buildings.  The famous The Stonemason’s Yard is a case in point, and there can be little doubt that it was one of the Canalettos in the National Gallery that Newton greatly admired and studied assiduously. 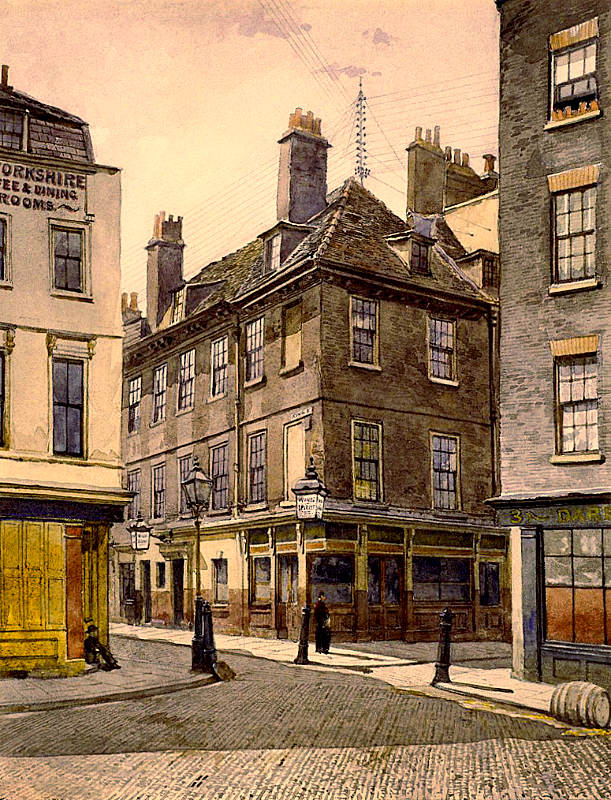 King Street in Stepney, one of a series of paintings in watercolour by John Crowther.  Date unknown.  The watercolours, numbering over four hundred, were presented to the Guildhall Library by Sir Edward Chadwyck-Healey in 1961, and are now in the London Metropolitan Archives.

At times this advocacy of an urban realism has an agenda that goes beyond the strictly artistic.  In the nineteenth century we see this in a concern to record faithfully the buildings of “old” London.  Artists like John Crowther were anxious to preserve in images what was slowly being swept away by metropolitan improvements.  Even where the impulse was not strictly archival, it might at least be documentary in spirit, and the many fine illustrations of the poorer parts of the capital in, say, Old and New London are unsparing views of ramshackle buildings that had a picturesque quality completely at odds with the human misery that festered within their walls. 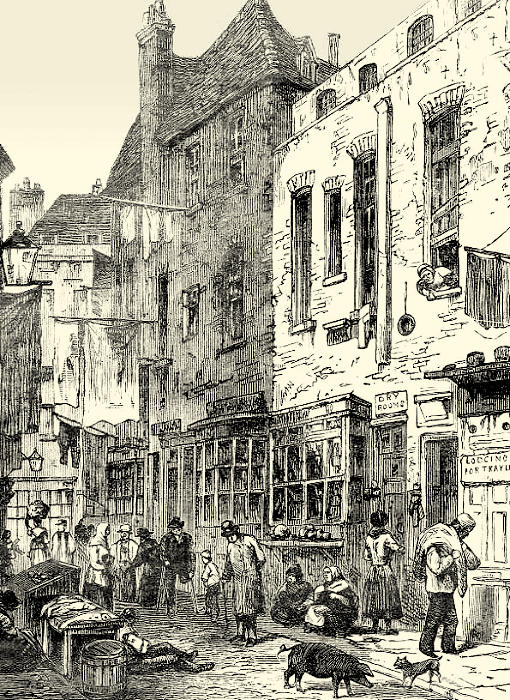 WORN BY TIME
The most obviously programmatic exposition of pleasing decay is an article by the painter John Piper, which was published in the Architectural Review in September 1947.  Piper proposed that we lay aside our distaste for the bad art of the past—the excessive attachment to “cottages shaded by trees and matted over with ferns”—in order to look again at the real beauty in time-worn buildings.  In support of his views he enlisted, among others, Henry James, who in his English Hours of 1905 wrote that

in so far as beauty of structure is beauty of line and curve, balance and harmony of masses and dimensions, I have seldom relished it as deeply as on the grassy nave of some crumbling church, before lonely columns and empty windows where the wild flowers were a cornice and the sailing clouds a roof. 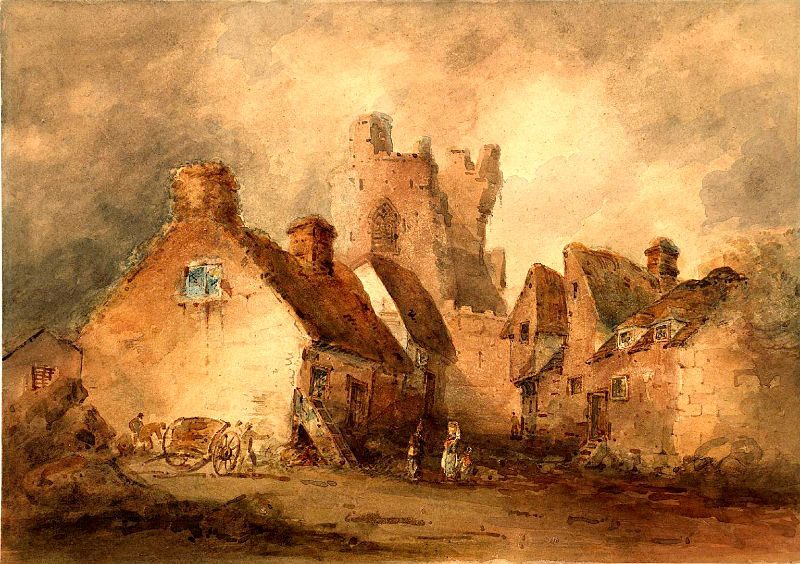 Piper found these ideas realised in the work of painters like John Sell Cotman and Samuel Prout.  The former, he thought, was “particularly susceptible” to the charm of aesthetic neglect.  The latter “speaks of very little else” in his work.

Piper had anticipated his preoccupation with pleasing decay in the paintings of bombed buildings he executed in response to two initiatives, namely the War Artists Advisory Committee, and the Pilgrim Trust’s Recording Britain project, the purpose of which was to create a visual record of the impact of the Second World War on civilian life.  A fine example of his ability to raise the documentation of the devastating effect of Luftwaffe raids to artistic heights is his image of the church of St Mary le Port, which had been gutted by the bombs that rained down in the Bristol Blitz of November 1940.  Alongside familiar elements of ecclesiastical architecture—the tower, the arch, the tracery—there are the new motifs of the shattered wall and the rubble. 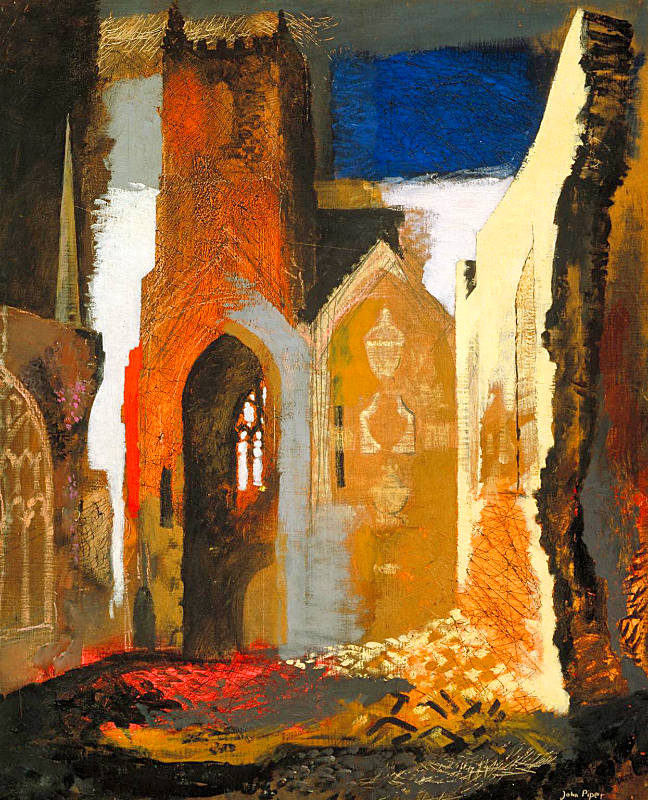 DEATHLY SILENCE
When we turn to the urban paintings of Algernon Newton, it is clear that “pleasing decay” is a valuable conceptual tool.  The haunting atmosphere of these images has been variously described as peculiar, strange, even menacing.  They have an eerie stillness, as noted by Richard Shone in the Burlington Magazine in 1980:

Newton’s best work evokes the deathly silence of decaying London, often by a suggestion of noise—footfall, flapping laundry, the slap of water against an empty barge.  Important skies gather above peeling stucco, factories by the Regent and Surrey Canals, abandoned houses in Paddington—how they recall the London scenes of Eliot’s early poetry.  Curious details add to the evocation without distracting from the picture’s firm design—a leafless tree gasps above rooftops, a cat prowls, shadows gather into disturbing configurations. 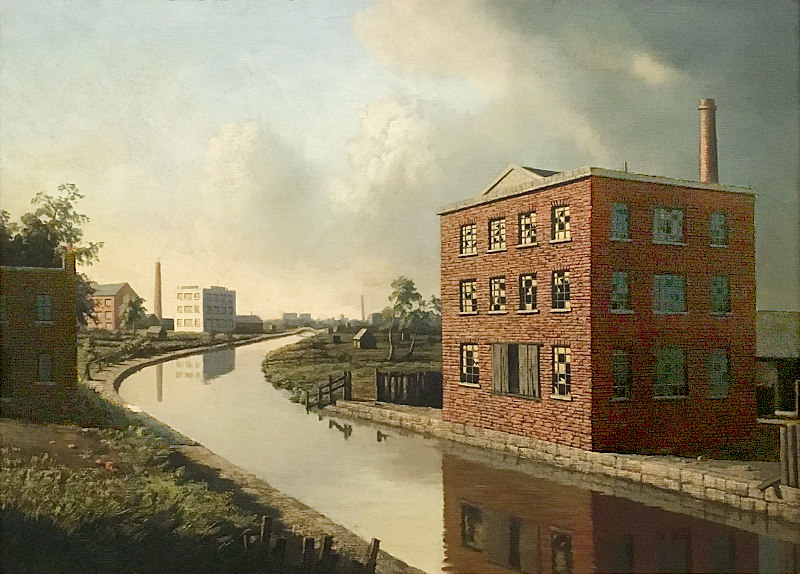 All these aspects of Newton’s vision come together in A Deserted Factory, which was painted in 1941.  The smashed windows of the factory are clearly expressive of redundancy and abandonment, and the complete absence of human life makes this one of the “unpopulated scenes” described by Adrian Clark in the British Journal of Art in 2013—the disturbing images that suggest that “we have arrived just after something has happened”.  The dark clouds to the right of the sky, the featureless white building at the water’s edge, the dreary banks—a landscape less lovely would be hard to imagine. 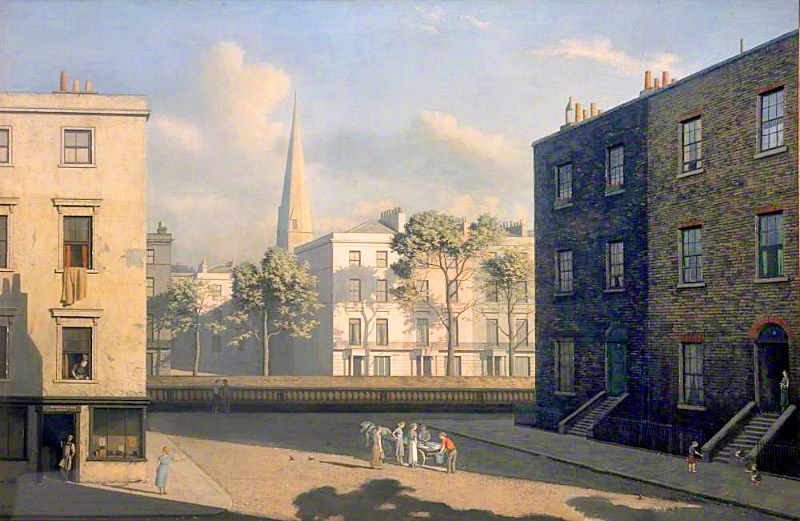 And yet the eye dwells with pleasure on the bleakness the artist has so painstakingly recorded.  The sweep of the water is gracefully curved.  The reflections of the buildings and the freestanding chimney are precise.  The brickwork of the walls of the factory has a satisfying complexity, and the irregular pattern of broken and unbroken panes in the windows is oddly animated against the boxlike utilitarian structure. 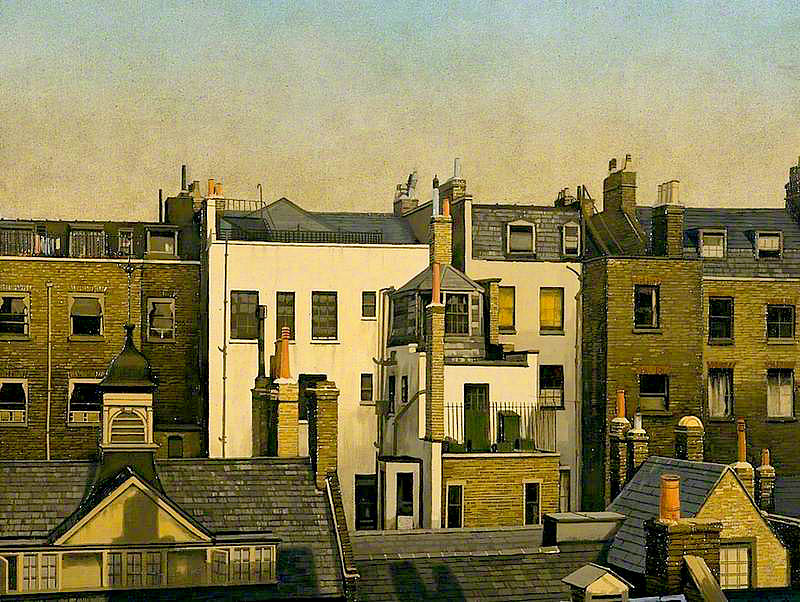 A TOUCH OF DESPAIR
At first glance his Townscape appears to be very different in mood, an assemblage of tall houses in a spacious and sunlit setting, complete with human figures and handsome trees.  But Newton has missed nothing, and the patches of damaged plaster in the house on the left indicate that here too time has done its work.  Something has been left to dry on the sill of a second-floor window—a sheet, perhaps, or a rug—and this symbol of the dull business of domestic life adds a touch of sadness, even of despair.  The figures are dwarfed by their surroundings, so much so that the woman leaning from the window seems to be remote from those at street level.  Meanwhile the woman standing at the top of the steps to the right, watching the two children, has an isolated air, alone in the shadows of the doorway. 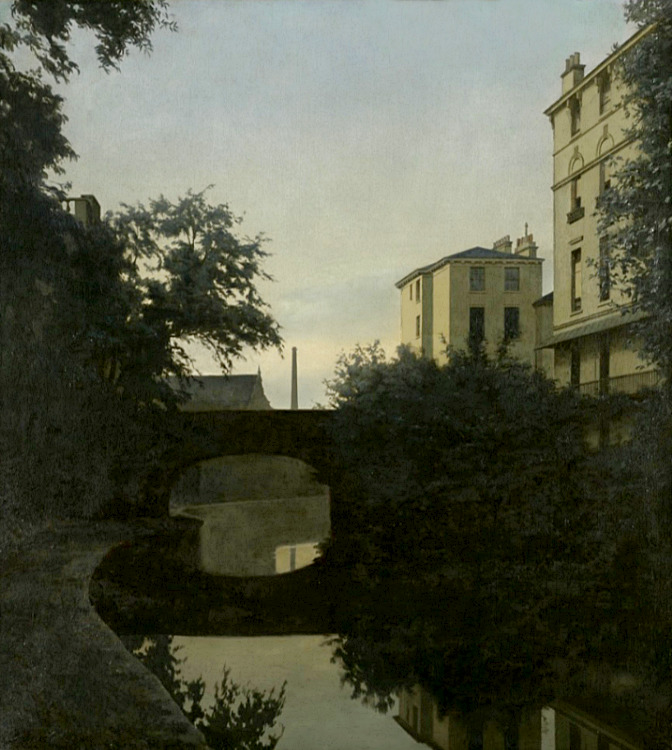 The same comments apply to other paintings by Newton, in which buildings alongside canals have smashed windows, peeling walls, washing draped out of a window or pegged on a line.  Again, a painting of the backs of houses, ostensibly a forensic study of urban claustrophobia, with the trademark clothes hanging out to dry and windows opening into gloomy interiors, is in fact a beguiling collage of texture and geometrical shapes.  The dreariness, captured with consummate skill, is not so much condemned as celebrated. 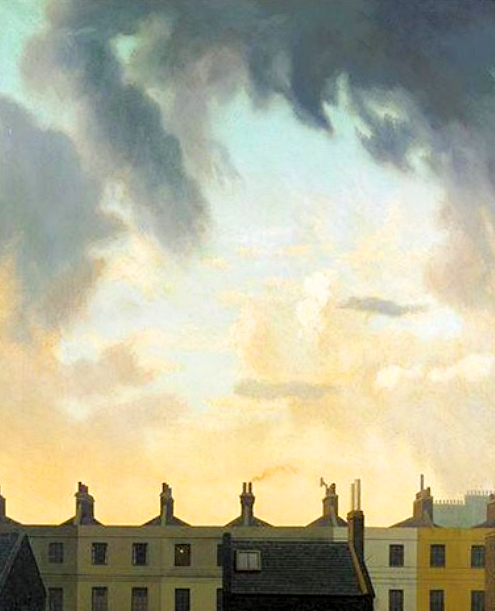 A DEEPER BEAUTY
Newton articulated his approach to his London paintings in an unpublished manuscript with the title Thoughts about Art and Life.  There he stated openly that he was principally drawn to poorer areas of the capital, which seemed to him decidedly more attractive than the West End.  Buildings in the wealthier quarters, he argued, were too often out of sympathy with their historical setting.  He also described how a painting of a twilit house by the Regent’s Canal was an attempt to express something that went deeper than its simple physical properties—something approximating to life, something subject to the passing of time. 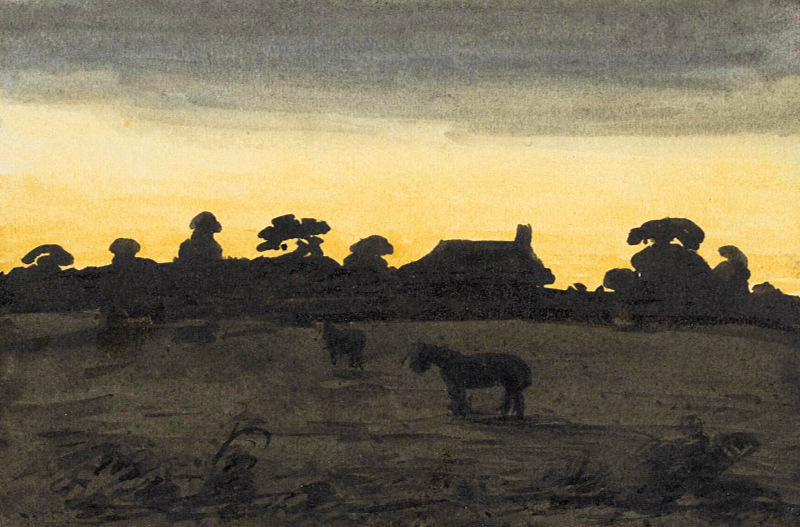 He has discovered beauty where others might find only drabness, and sadness.  A painting of an evening sky glowing above a row of houses records that moment in time when the day is about to end—to decay—but has not yet lost its radiant brilliance.  An Essex landscape is turned into shadows and silhouettes under a setting sun that splashes a lovely yellow light across the horizon.  A view of a moonlit Dovehouse Street in Chelsea has a simplicity of line and colour that commands attention.  These and other such images are as important in an assessment of Newton’s achievement as the “Canalettos” for which he is mainly remembered.