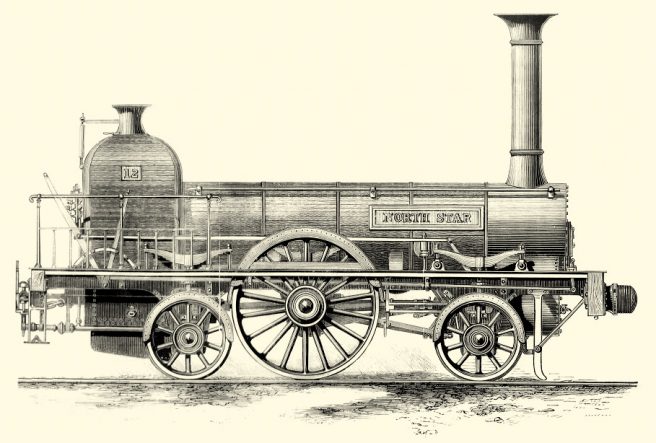 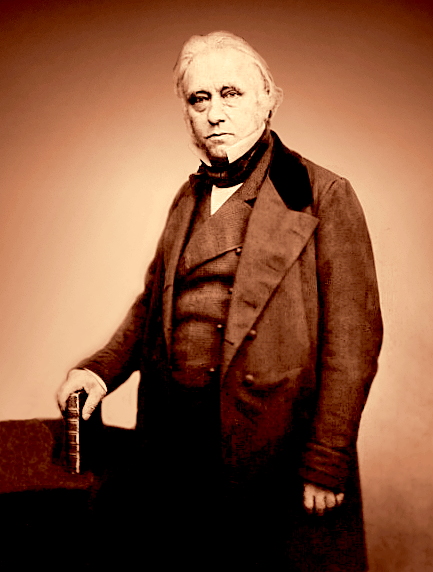 On Monday the 9th of January 1860 Lord Macaulay was buried in Westminster Abbey.  Macaulay is remembered principally as a leading nineteenth-century historian whose writings have won him both admirers and detractors.  He was also a Whig politician, and in this capacity he certainly made his mark.  His health had been in decline for many years, and on the 28th of December 1859, at his home in Campden Hill in Kensington, he suffered a fatal heart attack.  He was fifty-nine.  The general feeling in the days following his death was that he had been a man of unquestionable importance, and the Daily News no doubt spoke for many when it declared that the country “had suffered an irreparable loss”.

On the day of Macaulay’s funeral a crowd of some two or three hundred people gathered outside his residence, Holly Lodge, to pay their respects.  Shortly after midday a horse-drawn hearse set off from Campden Hill, and with it went three coaches carrying the mourners and a brougham.  The cortège made its way through Kensington, where people watched from the pavements, and the bell of the parish church tolled in solemn tribute.  At Hyde Park Corner the procession was joined by about a hundred carriages, a visible mark of the esteem in which Macaulay was held by the great and the good.  From there the body was taken past Buckingham Palace and on down Great George Street to the Abbey, where it arrived shortly before one.  An hour later, following the service for the burial of the dead, the public were allowed to approach for a final view of the coffin. 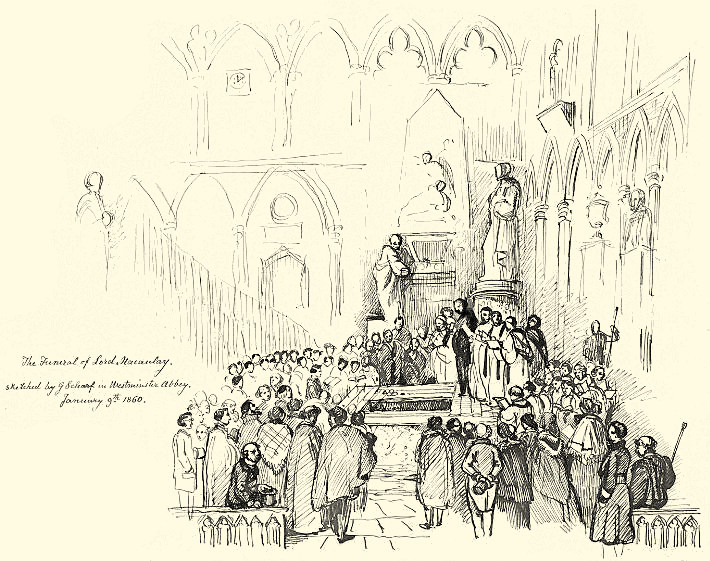 When the cortège came clattering through Westminster, two small boys, who had been looking in a shop window, turned to see what was going on, though their interest lay elsewhere, and they had not the faintest idea of the significance of the occasion.  They were brothers.  The older was Alfred Rosling Bennett, and he was nine years old.  The younger was probably William—Alfred had several brothers—who was eight.  Only later, at home in Coburg Road in Camberwell, did they find out from their father, a cotton goods merchant by the name of John Richard Bennett, that they had witnessed the last journey of a prominent man.

IN BRIDGE STREET
Alfred Rosling Bennett would one day make an impact, too.  In adult life he was an electrical engineer, and he carried out impressive work, both at home and abroad, in the field of telegraphic and telephonic communication.  He was also a journalist, and his activities as a writer lie behind two other articles on the London Overlooked website, one on Walk On Jenkins and his showdown with Slogger Ward, the other on the love of a butcher’s boy for a young cook.  Furthermore, he had a consuming interest in railways, a subject on which he published a number of titles.  For Bennett, railways were a serious matter, and in 1915 he served as vice-president of the Institution of Locomotive Engineers. 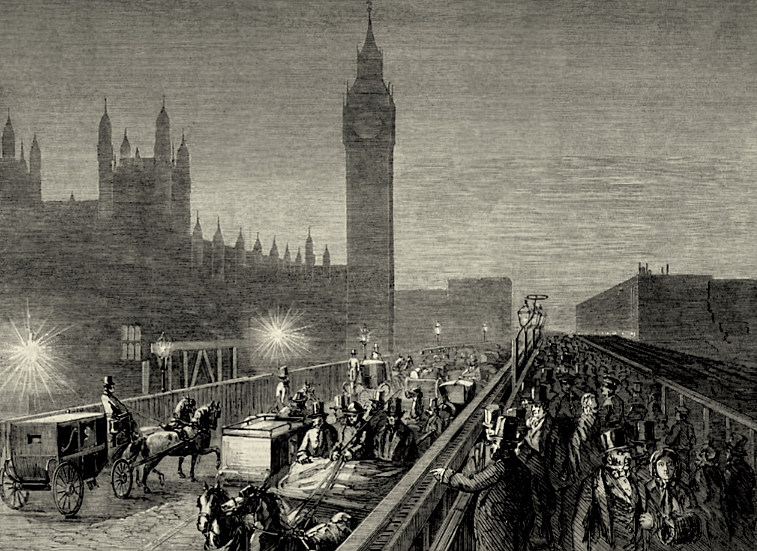 A view across Westminster Bridge after the installation of lime lighting.  The optician’s shop at 11 Bridge Street was in the row of buildings to the right of the scene.  Image in The Illustrated London News 19 May 1860.

And it was a model of a locomotive that the Bennett brothers had been admiring when the body of Lord Macaulay arrived at its final resting place in the Abbey.  The model was in the window of 11 Bridge Street, which runs from Great George Street down to Westminster Bridge.  In January 1860 no. 11 was occupied by Misses Sarah, Mary and Charlotte Beck, who were milliners, but it was also the business address of John Lyon Alexander, a surveyor, and Robert Mallet, a civil engineer.  Over the next few years changes would take place, and the milliners and the surveyor would give way to a wine and spirit merchant, a law stationer and more engineers.  However, Robert Mallet remained, and he was still there towards the end of the 1860s, when he and all other businesses handed over occupancy of 11 Bridge Street to Charles Suffell.  Suffell was a maker of mathematical instruments—of the sort used by surveyors like John Lyon Alexander—and for this reason he also advertised himself as an optical instrument maker or optician.

But to return to Robert Mallet, an engineer of remarkable versatility, whose interests ranged from the science of earthquakes to the properties of industrial materials.  He was Irish, and lived in Dublin, but by the time the young Bennetts planted themselves in front of 11 Bridge Street he was working in London as a consulting engineer.  Almost certainly the model locomotive was connected with the extensive railway engineering work he had undertaken in the 1840s, although its curious history by no means ended there. 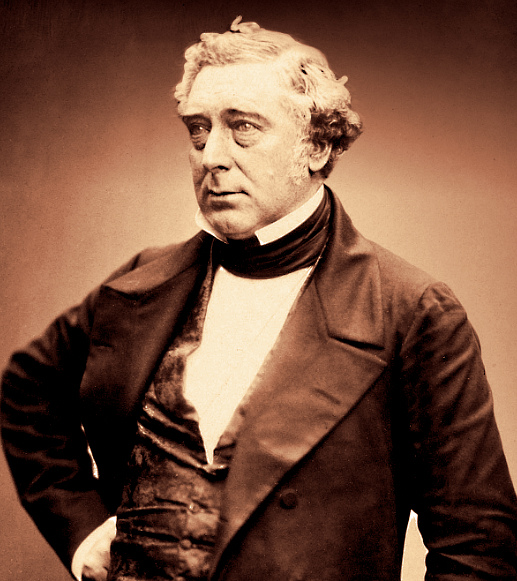 THE NORTHERN STAR
The model was an accurate representation of an engine type that had been patented by Robert Stephenson in 1841.  Stephenson’s design, which placed the three wheel axles under an elongated boiler, achieved an increase in engine power together with a reduction in the loss of heat and unburnt fuel.  The first two “long boiler” locomotives were built for the York and North Midland Railway and the Northern and Eastern Railway, and a beautiful illustration of the second of these was published later in the century, in 1892, in the Engineer.  The name of the locomotive was “Northern Star”, a perfect evocation of the romantic age of the nineteenth-century railways.

The model was made in 1845, that is to say only a few years after the long boiler locomotives came into service.  Who made it is not known, and it is equally unclear how it arrived in Bridge Street, although it is not hard to see why Robert Mallet would want to put it on display in the window of no. 11.  And it can be said with some confidence that it would have caught the eye of anyone walking past the shop, for it was an impressive size.  The overall length of the locomotive in Stephenson’s design was almost twenty-four feet, and the model, which was scaled by a factor of one-eighth, was near enough three feet from end to end.  No wonder the young Bennett brothers were scarcely aware of the solemn procession in a nearby street!  By an odd coincidence, Robert Stephenson had himself recently died, on the 12th of October.  And like Lord Macaulay, who survived him by a matter of weeks, he was buried in Westminster Abbey. 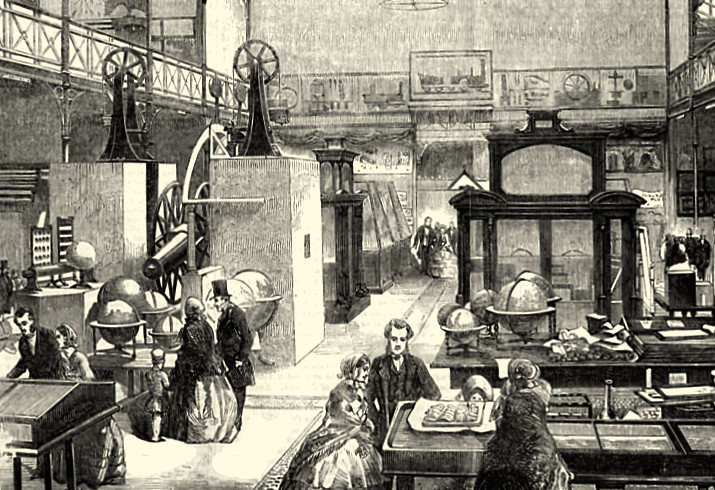 Now, the model of Stephenson’s long boiler locomotive has survived.  What is more, its survival is not only an interesting tale in itself, the continuation, as it were, of the history of the model, but it forges a second link with Alfred Rosling Bennett—not the nine-year-old Bennett with his nose pressed against the window of a shop on a cold winter’s day, but the elderly Bennett, whose youthful passion for railways was undimmed by the passing of the years.  And at the heart of this charming tale is that most noble of institutions, the Science Museum in South Kensington.

A GOLDEN AGE
In fact the Science Museum as we know it—the imposing edifice in Exhibition Road—did not exist at the time we are talking about.  In an earlier form it had been the Patent Office Museum in Cromwell Road, where it was one half of the South Kensington Museum, the other half being the art collections that would in time evolve into the V & A.  Among the exhibits illustrating the world of engineering and manufacture were such beauties as William Hedley’s “Puffing Billy” and George Stephenson’s “Rocket”. 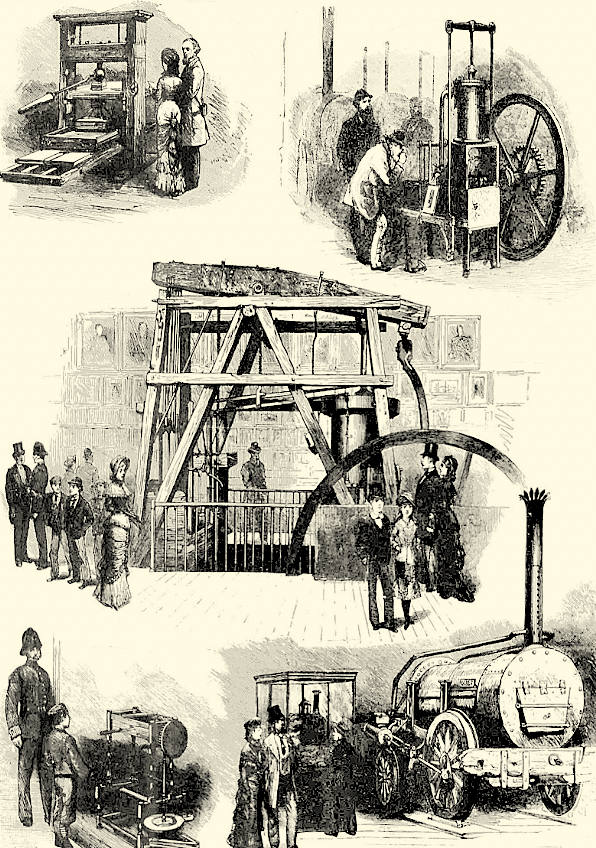 Five exhibits in the Patent Office Museum in South Kensington.  Image in The Graphic 3 January 1880.

But there were also models of locomotives, the purpose of which was to demonstrate and test new designs.  Many of us will have seen these gleaming prototypes, either in the modern Science Museum, or, more recently, in the National Railway Museum in York.  But our Victorian counterparts, visiting South Kensington, were gasping in astonishment at the beautiful models in their glass cases long, long before we got there!

The Science Museum formally came into existence in 1909.  However, it had been taking shape for a number of years, and in the 1880s it acquired the contents of the Patent Office Museum, which soon became defunct.  But the key date for our story is 1914, for that was the year in which building of an independent site for the museum began, and in which the model of the long boiler locomotive—the very model that had been so admired by the young Alfred Rosling Bennett—came to Exhibition Road.  Old catalogues record that it had been lent by a “G.” Stephenson”, who was probably one of the two cousins of Robert Stephenson with the name George. 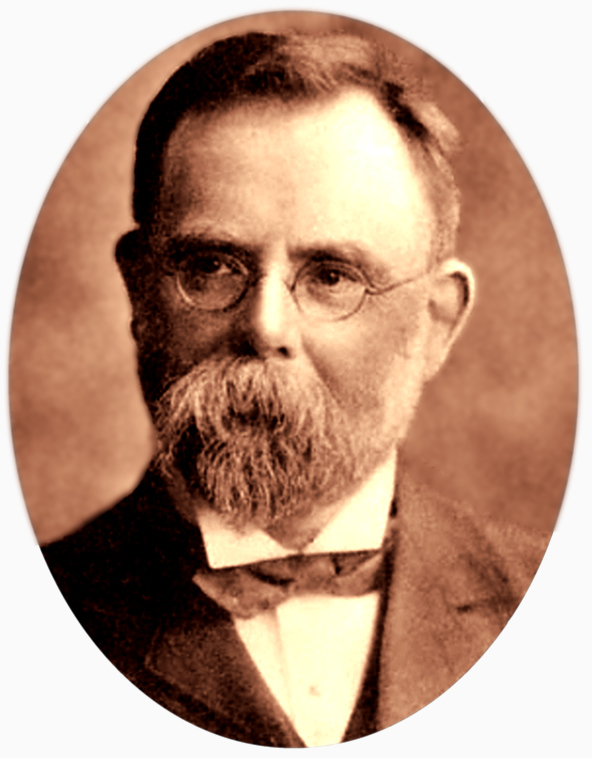 Portrait of Alfred Rosling Bennett by Elliott & Fry.  The sitter was in his late fifties at the time the photograph was taken.  © National Portrait Gallery

And, as fate would have it, the day came when Bennett was unexpectedly reminded of that January day in 1860 when he had stood, lost in wonder, at the window of an optician’s shop in Bridge Street.  In one of his books he described the encounter, briefly but movingly:

Revisiting the Science Museum, South Kensington, about 1918, I found amongst several models recently added to the fine collection there was my old Westminster friend, instantly recognisable after fifty-eight years or so.

A connection with childhood—a connection with precious and happy moments from a distant past—had been magically effected by nothing more than an object made of painted and polished metal.

NOW GONE
On the 26th of July 1868—a Sunday—a fire broke out at 11 Bridge Street.  Efforts to control the blaze proved futile.  The shop was gutted, its stock of mathematical instruments destroyed.  After the catastrophe Charles Suffell, the unfortunate optician, soldiered on for a few years.  Then in about 1870 he was succeeded by the partnership of Jonathan and William Edward Archbutt. 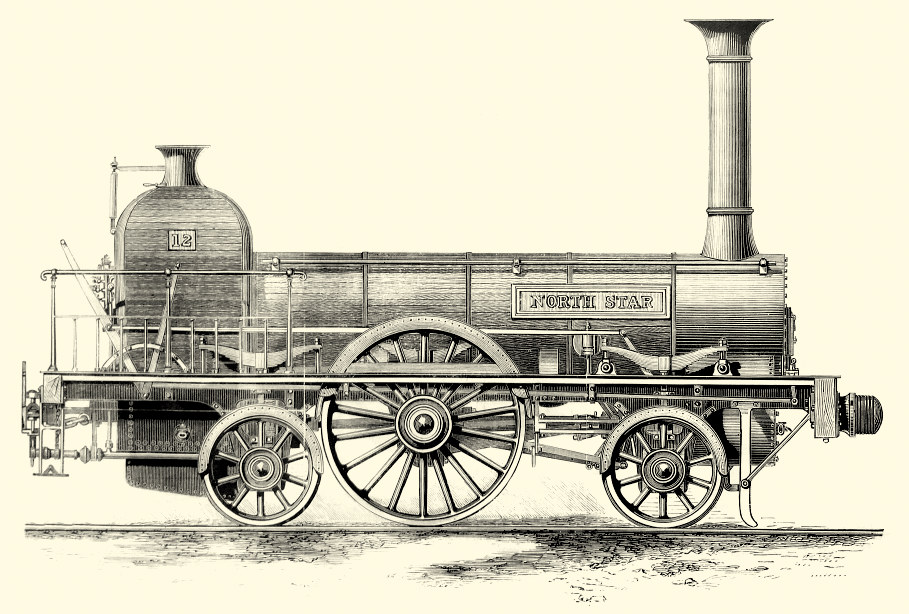 Robert Stephenson’s long boiler locomotive.  Image in The Engineer 27 May 1892.

Like Suffell, the Archbutts were instrument makers, so the spirit of the place had not changed.  But by the end of the 1880s they had moved their business to the south side of Westminster Bridge.  No trace of the optician’s shop that the Bennett brothers had once found so alluring remains today.  The train, we might say, has long since pulled out of the station, its locomotive steaming for the very last time.

The Magic of Christmas, or, Charles Dickens and Hamley’s of High Holborn