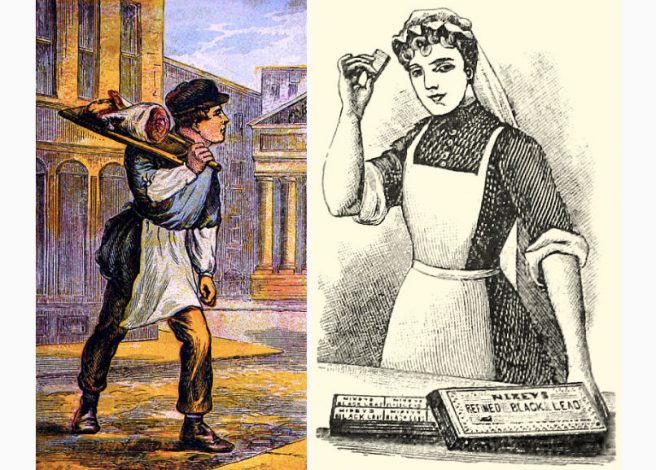 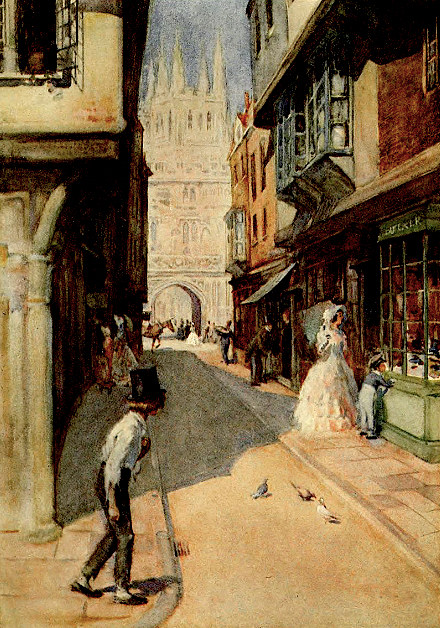 David Copperfield arrives in Canterbury, the scene of his fights with the belligerent young butcher.  Image by Frank Reynolds in Charles Dickens David Copperfield (1910) between pages 160 and 161.

One of the most memorable minor characters in the novels of Charles Dickens is the young butcher in David Copperfield.  We first meet him in Chapter Eighteen, when David is a pupil at Dr Strong’s school in Canterbury.  The description of him—he has a broad face and a bull neck and rough red cheeks—is not exactly flattering.  He greases his hair with beef suet, and his mind, which is not subtle, and his tongue, which is not polite, do little to improve his image.  He targets the “young gentlemen” as they walk along the street, punching the smaller boys on the head, and challenging others, David included, to take him on.  Those he fights he will fight with one hand tied behind his back.

Inevitably the butcher gives David a thrashing, although in a second fight the schoolboy turns the tables when he channels his frustrated love for Miss Larkins into a furious assault on his tormentor.  But the real triumph comes much later, in Chapter Fifty-Two, when David, returning to Canterbury as a young man, sees the butcher again.  The bruiser of Chapter Eighteen now sports the badges of respectability—“top-boots and a baby”—and David sees him a new light.  By this time David has achieved success as a writer, and so his ultimate victory is to have established himself at a level of Victorian society which will always remain out of the butcher’s reach.  Revenge, in Dickens’s world, is certainly sweet, and it is very sweet indeed when it comes with a dollop of snobbery. 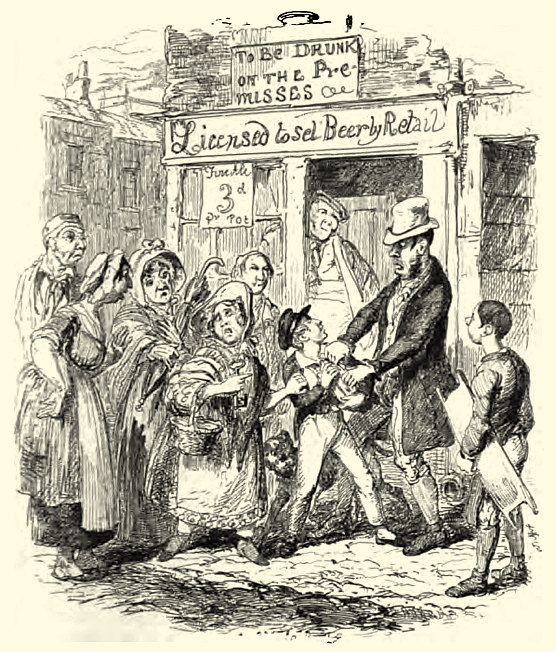 Oliver Twist is manhandled by Bill Sikes, while the indolent butcher’s boy, with a meat tray under his arm, looks on from the far right of the scene.  Image by George Cruikshank in Charles Dickens Oliver Twist volume 1 (1839) between pages 246 and 247.

SCRAGGING THE DOVE
Dickens seems to have had a bit of a thing about butchers.  The butcher’s boy in Chapter Fifteen of Oliver Twist, who looks on as Oliver is dragged back to Fagin, has hair shiny with suet, much like his counterpart in David Copperfield, and a lounging manner.  The greasy hair was perhaps an occupational hazard, but the indolent disposition perhaps betrays a tendency on the part of the author to patronise those in trade.  In his letters he records an extraordinary incident involving his pet raven, Grip, and a local butcher.  The butcher, it would seem, was attacked by the raven.  Dickens records the fellow’s outrage—his “pantaloons have suffered considerably”—as well as his grotesque promise to throw poison over the garden wall.  The wall in question was in Devonshire Terrace, and one imagines that the butcher hoped that Grip would ingest the poison and come to a miserable end.

Was Dickens imagining the business with the poison?  He thought not, and he even made a note of the butcher’s very words, which, he remembered, were that

he worn’t a goin to have pieces took out of his leg ev’ry time he come down them Mews, at no price.  And that if the wery dove as come out o’ the Hark interfered vith him, he wished he might be busted, if he wouldn’t scrag him.

Loosely translated, this tells us that the butcher disliked being pecked by a bird, and that he was ready to throttle the next one that annoyed him, even if it was the Biblical dove.  Incidentally, on a purely linguistic note, it is interesting to observe how Dickens embellishes his third-person report of the butcher’s words with the man’s distinctive speech patterns.  A clever trick.  Another point: you can find out more about Dickens’s fondness for ravens in another post on this blog. 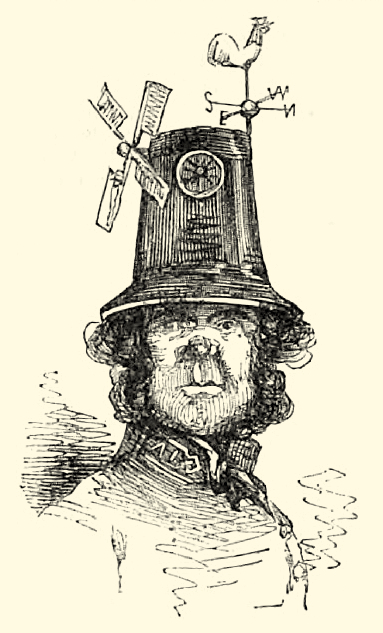 What would the London butchers’ boys have made of this new design of police hat, complete with ventilator, windmill and weathercock?  The windmill increased the flow of air, and the weathercock ensured that the bobby knew “what was in the wind” as well providing counterbalance.  Image in Punch volume 6 (1844) page 176.

CASUALLY INSULTING
But Dickens was not alone in fixating on butchers and their boys.  Alfred Rosling Bennett, an electrical engineer who for some mysterious reason published a book in 1924 on Victorian London and Victorian Londoners, tells us that the butchers’ boys of the capital were “blusterous and aggressive” as well as numerous.  Like young David Copperfield’s Kentish nemesis they were always ready to fight.  They made no concessions to rank—“policemen they derided to the very limit of safety”—and they would put up their fists at every opportunity.  But Bennett believed that there were definite rules of engagement.  “To hit an opponent when down,” he noted, “kick, strike below the belt, or take any other mean advantage was not to be thought of.”

Their fighting spirit was not always so obviously pugilistic, and it expressed itself equally in casual insults aimed at perfect strangers in the street.  Bennett again:

These boys and others also made a point of demanding, “Who’s your hatter?” of anyone whose “tile” departed a hair’s breadth from the strictest precepts of custom … “Does your mother know you’re out?” and “How’s your poor feet?” were other public interrogations calculated to disturb the complacency of stylishly dressed personages of either sex.

One hates to think what damage it must have done to the reputation of the London butcher if even half of Bennett’s claims were true. 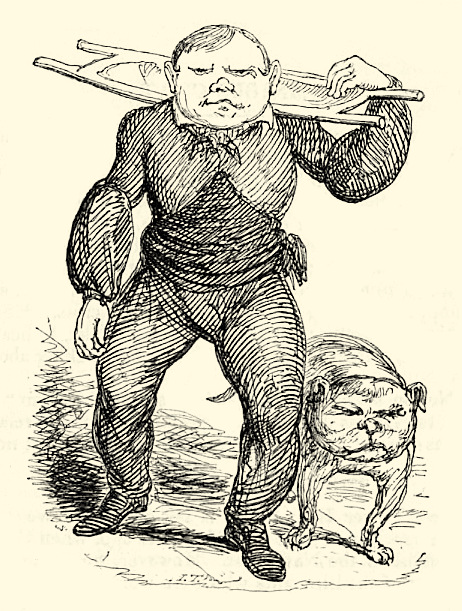 An alarming vision of a butcher’s boy with canine companion.  Image in George Cruikshank Omnibus (1842) page 225

Mind you, to judge from Bennett’s lurid recollections, the meat trade did not have much of a reputation to lose.  Meat was delivered to a customer’s home either in a basket or on a wooden tray balanced on the shoulder.  As a rule neither basket nor tray was covered, with the result that the cuts arrived with a coating of dust, soot and flies.  Sometimes, though, small pieces of meat, such as chops, were wrapped in paper, and Bennett suggested that it was a “blood-stained envelope of this kind” that sparked his interest in locomotives.  The paper was a page torn from a periodical with a cutaway picture of a train engine—“boiler, fire-box, tubes, cylinders, pistons”—which gave him a great deal more pleasure than the meat. 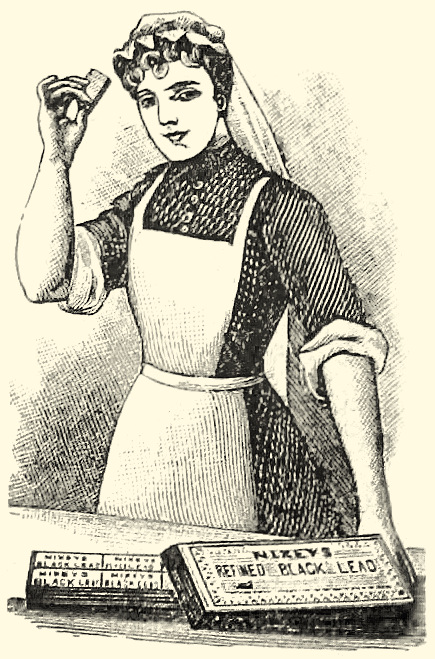 A young female servant in a nineteenth-century household.  Image in Robert Brown The Story of Africa and its Explorers (1896) page 344.

COOKING FOR THE CLARKS
All of which is merely my excuse for telling a rather good—and a rather sad—story about a butcher’s boy and a young cook.  I assume that the story is a reliable narrative of actual events, for it appeared among the law reports in a reputable London newspaper.  And it goes like this.

The cook, who was called Sarah Miller, and who was in her early twenties, worked for a respectable family, the Clarks, who lived at no.12 Hill Street in Peckham.  This was between the years 1848 and 1849.  The boy—we know he was eighteen but not what he was called—worked for a local butcher.  And it was while making his deliveries of meat to the Clark household that he caught sight of the lovely Sarah Miller, and fell head over heels in love.  Sarah experienced similar pangs of affection, and, having asked Mrs Clark for permission, invited the boy to visit her in the kitchen in Peckham where she toiled away, boiling and baking, braising and roasting, day after day after day. 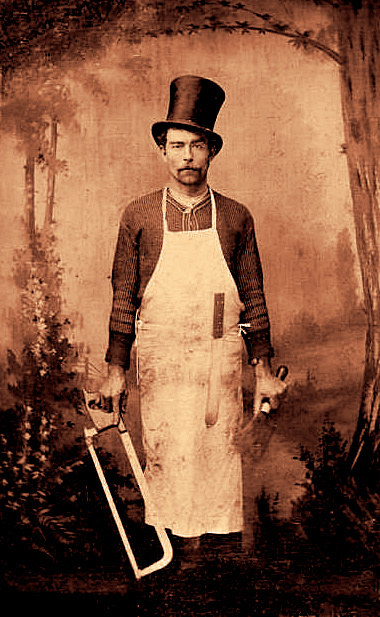 Before long the butcher’s boy was dropping in frequently.  Obviously flattered Sarah assumed that she was being courted, and her fellow servants were inclined to agree.  And the boy played his part to perfection.  He told Sarah, more than once, that he hoped to marry her.  He assured her that he had ambitions, that he would go into business on his own account, that they would have a servant of their own.  And this servant would be one of the Clark servants, who would be whisked away from no.12 Hill Street to serve them, and not the Clarks, in their marital home.

Nor was that all, for the eighteen-year-old also sent Valentine’s Day messages, and letters filled with poetic sentiments.  And so the affair carried on for many months, until the summer of 1851, when it ended.  Apparently the butcher’s boy had become somewhat cool towards the lovely young cook, who in her turn came to believe that her once ardent suitor had been stringing her along with empty promises.  There was also a suggestion that he had come into some money—an uncle had left him a thousand pounds on his death—and that he had decided that the time had come to move on.  And in moving on, as far as the unhappy Sarah understood it, he had moved out of Peckham, and out of her life. 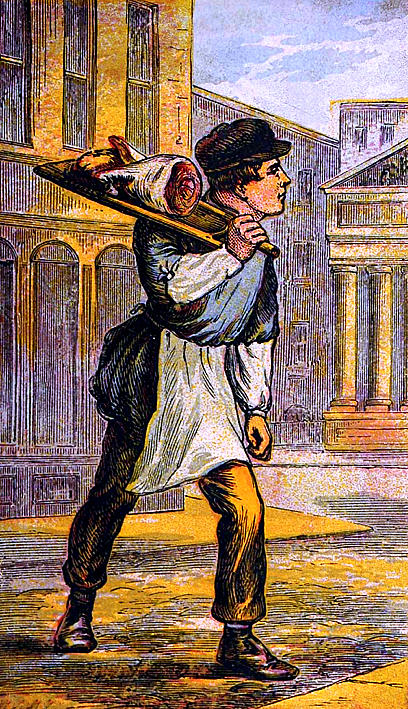 A rather more sympathetic vision of a butcher’s boy by Horace William Petherick.  Image in Laura Valentine London Characters (1875).

MY BUTCHER’S BOY
In fact there was no thousand pounds, only a boast that the butcher’s boy had circulated, no doubt to camouflage the truth.  And the truth was that he had thrown Sarah over, and needed a plausible story to explain his absence from the house in Peckham.  Nor was there a death of an uncle, although there was most certainly an uncle, and the uncle must have had some influence over his nephew, as Sarah paid him a visit to complain about the treatment she had received.

To add insult to injury, the butcher’s boy went off and married another woman.  This was too much for Sarah, who promptly sued him for a breach of promise of marriage.  With the benefit of hindsight she might have stayed away from the courts, for the fifty pounds damages she was awarded brought with them considerable humiliation.  The defendant’s counsel argued that the courtship had been only a harmless flirtation, and that the plaintiff, Sarah Miller, had nothing to recover through the courts, because all she had lost was “her” butcher’s boy, a put-down that was greeted with roars of laughter.  Furthermore, said the defence, it was a known fact that young cooks readily fell for charmers, and that they did so on account of the heat of the kitchen.  At which the courtroom resounded with laughter again.

Much was made of the letters that the boy had written.  They were used by the defence to show that their client was too inept, too unsophisticated to warrant the charge of cynical manipulation of an older woman’s feelings.  To prove their point they read certain passages to the court, a performance that provoked yet more patronising laughter.  Such sentimental nonsense could only have turned Miss Miller’s head if Miss Miller was willing to have it turned.  Whereupon the defence made a point which for them was their trump card, but which for us is the hollow pit of sadness at the very centre of the tale.  And the point the defence made was that the letters had in the end played not the slightest part in the matter, and the reason they had not played the slightest part in the matter was that the young cook in the service of the Clarks of no.12 Hill Street in Peckham could not read.