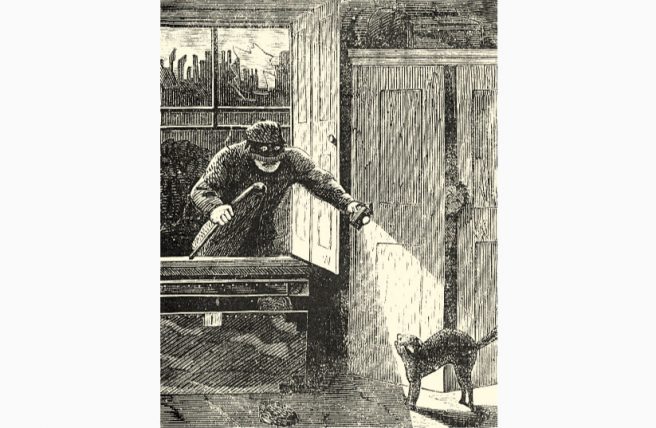 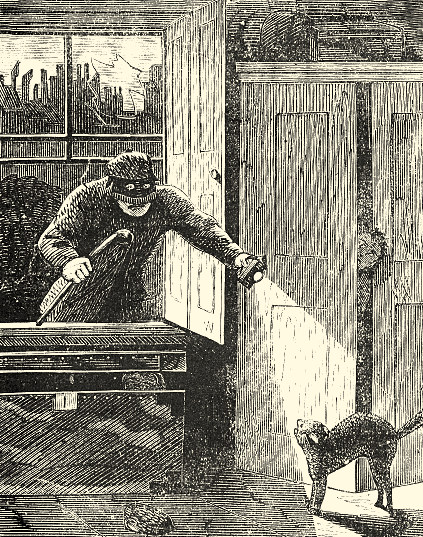 A Victorian burglar doing what burglars do best.  Image in The Wild Boys of London (1866) page 33.

In February 1894 three disreputable young men from Whitechapel were put on trial at the Old Bailey.  They had been caught one night on the roof of the Abbey Mills Distillery in West Ham Lane in Stratford, busily stealing ten hundredweight of lead.  A police constable, who had climbed about thirty feet up on to the roof, confronted the thieves.  One of them hurled a sheet of lead weighing over eighty pounds at the constable, who rolled down the slope of the roof, and was only saved from falling into a tank of water ten feet deep by the intervention of a fellow officer.  The thieves were hoping to get away with a valuable haul but ended up with sentences ranging from four months to three years.

One of the newspapers that reported the case made the interesting point that professional thieves had a fondness for lead.  In support of this claim reference was made to the activities of a once notorious felon by the name of Edward “Ned” Wright.  He rather specialised in this particular crime, and even in the early years of the twentieth century he was remembered for the lead stripping that had been his calling card as long ago as the 1850s.

We know a great deal about Ned Wright’s criminal career, because he considered his story remarkable enough to be told in print.  He confirmed that stripping lead from buildings was “one of the commonest thefts” he had perpetrated, so much so that on one occasion he had clambered on to the roof of the house where he was lodging, tools at the ready.  Nor was this mere underworld braggadocio, for court records show that at the tender age of sixteen he was found guilty of stealing some sheet lead, weighing about sixty pounds and worth a bob or two, from a sulphuric acid plant in Rotherhithe.

On that occasion young Wright was banged up for three months.  Not that this was his only experience of jail, for by all accounts he saw the inside of many a penal establishment as a direct consequence of many a colourful misdemeanour.  Even so his life had its share of twists and turns, and, as you will see, crawling over roofs in search of lead was just the beginning. 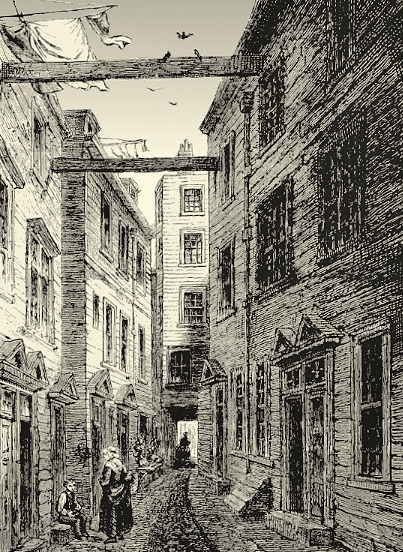 STEALING AND FIGHTING
Ned Wright was born in Southwark in 1836.  His parents, who were poor, lived in Pitt’s Place in Bankside, and much of his early life was set against the backdrop of the river, with its reeking waters and muddy shores, its lighters and billy-buoys, its vast warehouses and smoke-belching manufactories.  His father, a journeyman barge-builder, was a rough man, and a disciplinarian.  Inevitably young Ned fell in with bad company, and before long he had embarked on a life of crime.

As a boy he stole anything that was not tied down—money from a shop till, school badges from classmates, vegetables from working men’s allotments—and he quickly developed the skills that would make him an accomplished adult thief.  As a man he was violent as well.  Sadly his wife Maria—they were married in 1857—was a victim of his angry outbursts on more than occasion.  His mother too was attacked—he struck her in a fit of drunken fury—and his father had an axe thrown at his head.  The axe missed, but the incident did not exactly promote family harmony.

Even the armed forces could not tame Ned Wright.  He was in the army for a while, and fought in the Crimea, but he hated the discipline.  He was in navy as well, for a year or so, and while serving on HMS Alacrity in 1856 his wilful behaviour earned him three dozen lashes with the cat-o’-nine-tails, a harrowing experience that actually did little to deter him from trouble.  He carried on drinking, stealing and fighting until his discharge the following year.

The Doggett’s Coat and Badge on the River Thames, an annual rowing race between apprentice watermen, starting at London Bridge and finishing at Cadogan Pier in Chelsea.  Watercolour by Thomas Rowlandson dated between 1805 and 1810.

Obviously a man of enormous physical confidence, Wright found other more socially acceptable outlets for his abundance of energy.  He had all that it took to be a successful prize-fighter, and at one point he was billed to meet a celebrated pugilist by the name of Jack Connelly, although the encounter, which was keenly anticipated in the seedier quarters of the capital, never came off.  He was also a fine stroke-oarsman for the South London Rowing Club, and competed in prestigious races, including the Doggett’s Coat and Badge, for which he trained on a diet of beefsteaks, mutton chops and beer.  Two days before the race, while practising at Lambeth Pier, he rescued a boy who had fallen into the water.  He told the boy’s grateful mother that he too was a parent—he and Maria had started a family by then—and his gesture was not without significance.  Nor was his shame at spending the generous collection he received from an admiring crowd in a public house.  He confessed all to his faithful biographer, Edward Leach, who commented that

he could expose his life to danger, to rescue a drowning child; but he could not be brave enough to resist the temptations of drink.  He could sympathise with a mother’s sorrow and a child’s suffering; but in the midst of these allurements to drink he could forget his young and hungry wife, and neglect the wants of his infant child.

The note of remorse sounding loud and clear in these lines was a prelude to the Damascene incident at Astley’s Theatre in Lambeth that occurred a few months after the race, in which, incidentally, Wright was a runner-up, much to his annoyance. 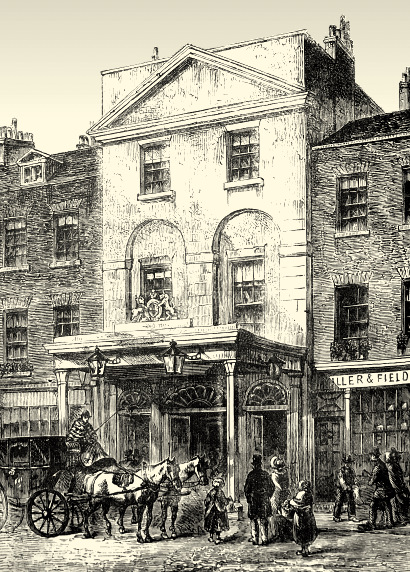 THE LAPSED MASSES
On the day in question—to be precise it was evening—Ned and Maria Wright wandered into the theatre not knowing what to expect.  They had been attracted by a bill promising free seats and no collections, and to their great surprise they found themselves at a revivalist meeting.  When the preacher, who was man of the people, spoke about the terrors of eternal damnation, the hardened criminal seemed to see his whole miserable life passing before him in lurid detail.  He was converted on the spot. 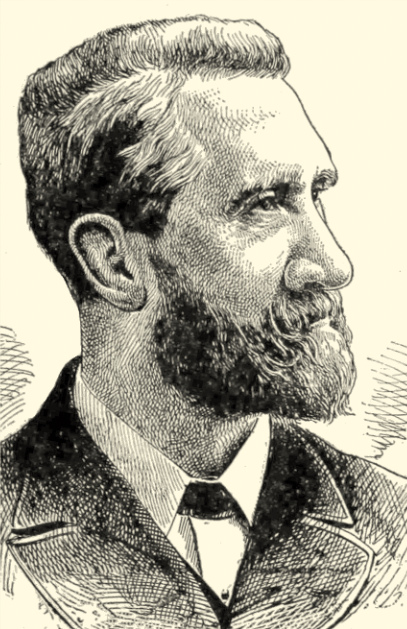 Filled with regret for his past misdeeds—his numerous thefts, his wanton violence, his brutal treatment of his family—Wright turned to a life of evangelical activity.  In the mean streets south of the river, where once he had been feared and respected, he now sold cheap bibles, supported in his struggle against old temptations by Maria, who, like her husband, had been transformed that evening in the theatre.  Now he won a new reputation, as a counsellor to those who hoped to turn their back on crime, and as a preacher who could hold an audience under his spell. 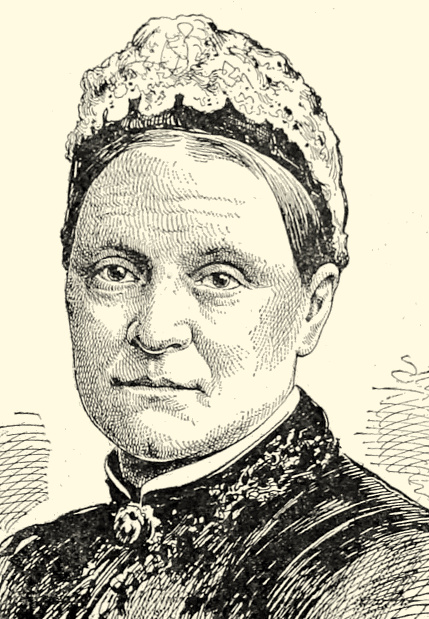 The long-suffering but loyal and supportive Maria Wright.  Image in The Christian Herald 1 April 1891.

The newspapers found it all fascinating.  In 1875 one rather impressionable journalist took himself down to Camberwell to see at first hand what went on at an evangelical meeting.  He clearly regarded the journey south of the river as an adventure in itself, and his account was laced with a voyeuristic pleasure at the “dangers” he had to negotiate.  Walking from Waterloo Junction he witnessed three drink-fuelled fights being broken up by the police.  The night air crackled with foul language, and he was struck by the jaded and careworn features of the people he passed, who seemed to him to be old before their time.  Arriving at the venue in Southampton Street—a tent with an earth floor and hard wooden seats—he was surprised to find an audience of only about two hundred people.  He was also a touch disappointed that there were no more than half a dozen “representatives of the lapsed masses” in amongst thoroughly respectable shopkeepers and artisans.

As for Ned Wright himself, our journalist considered him rather unprepossessing.  He was a fine physical specimen, to be sure, but his cropped black hair, sticking up straight from the top of his head, gave him away.  He had a deep and husky voice and the swollen nose and mouth of a man who had lived by his fists.  His eyes were set too deep for comfort—and they looked “furtively” at each other—and his lower lip had a disconcerting twitch.  But as a speaker he came fully up to scratch, dropping his aitches and alternating the language of the professional evangelist with the argot of the underworld. 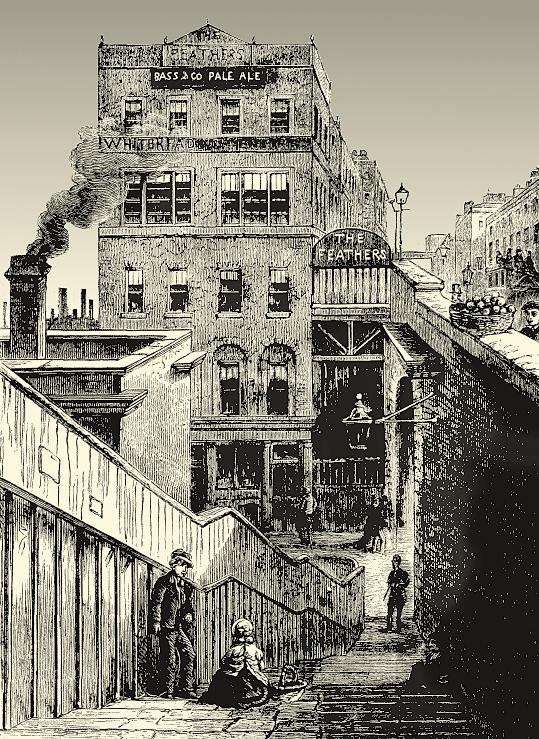 YOU SEE ME NOW
To others, though, Wright came across as an appealing character, and his “thieves’ suppers” were hailed as examples of a sort of rough-hewn philanthropy.  These were raucous gatherings open only to convicted criminals, who were fed on bread and soup before being addressed by the charismatic convert.  A magnificent illustration of one such supper was printed in the Graphic in 1870.  The faces of the diners are full of character, their expressions and body language betraying a range of moods, from simple enjoyment of the meal to the deep loneliness of the social outcast.  Wright can be identified easily enough, bearded and behatted, upright and earnest, patrolling the back of the room.

As one might expect, there were those who sneered, and the cynics dismissed Wright as a fraud.  When Leach published his biography, a sniffy reviewer in the Athenaeum had a field day, painting the preacher as a plausible rogue who exploited his hold over his gullible flock to get a new coat when he needed one and to have his rent paid when he fell into arrears.  There may have been something in this, for the book ended with a blatant request for pecuniary assistance.  “For his own and his family’s maintenance,” wrote the shameless Leach, “he is, as we have before said, supported by those who feel moved at various times to keep him from want.” 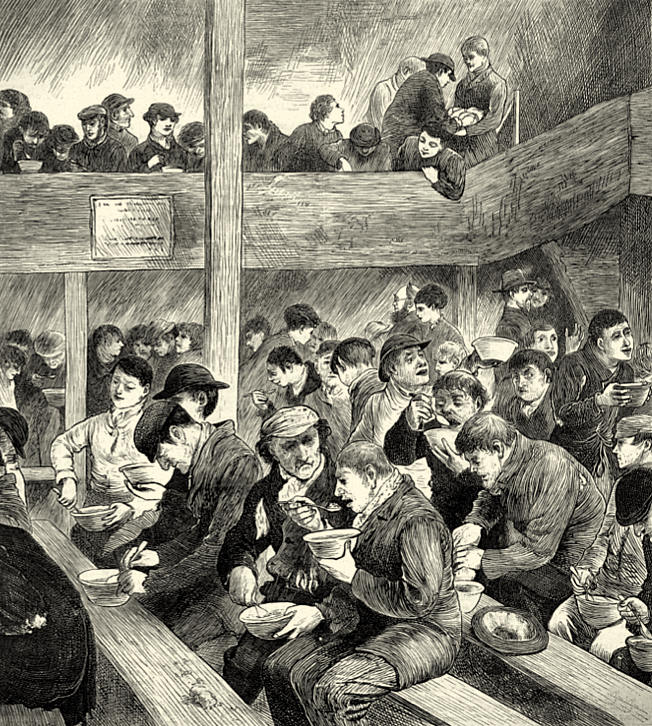 A thieves’ supper.  Ned Wright is standing beneath the gallery and facing right.  Image in The Graphic 26 February 1870.

For a more generous estimate of the man’s worth we need to go to local sources.  The South London Chronicle was perhaps always going to be better disposed than a highbrow journal to a man from the Bankside slums.  But it made the trenchant point that his “power for good” was immense, for

Ned Wright knows that when the sting of misery inseparable from the thief’s calling has pierced deep enough, the hand he holds out will no longer be turned from, but, possibly, will be grasped with sobbing gratitude; and so he goes on doing his good work with untiring energy—and doing it in a way that no other man can do so well.

And it cannot be denied that the Chronicle caught the essence of the man—warts and all—to perfection.  “I was a thief like the worst of you,” they reported him saying to a crowd of thieves.  “You see and know,” he went on, “what I am now.”

The Thieves’ Missionary, or, The Story of Thomas Lupton Jackson