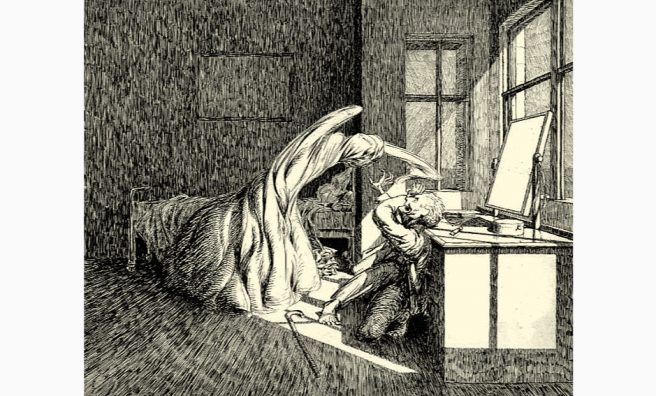 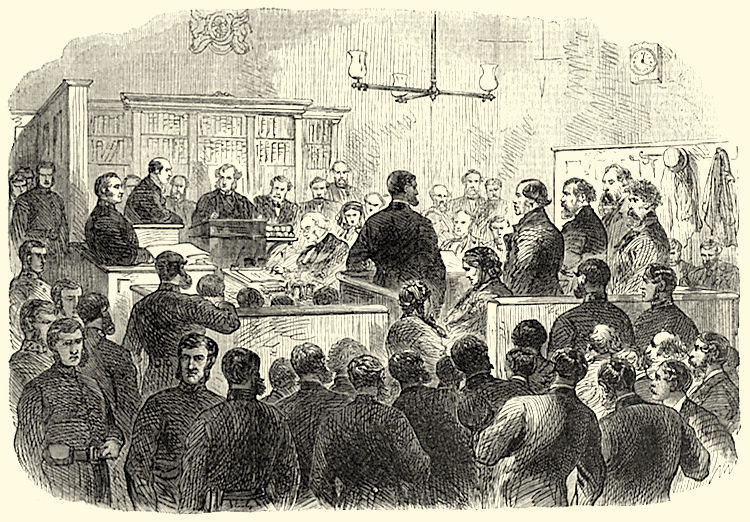 A trial at the Bow Street Police Court.  Image in The Illustrated London News 4 January 1868.

In May 1867 a boy by the name of Frederic Horgan, a carpenter’s labourer, appeared before the police court in Bow Street.  He was about sixteen years old, and was charged with creating a disturbance and causing a crowd to assemble in Woburn Square in Bloomsbury.  He had been taken into custody by Police Constable James Hogan of the ‘E’ or Holborn Division, who had a rather remarkable story to relate to the court.

Constable Hogan, who was in his late twenties, had been on duty in Woburn Square on the night of Wednesday the 29th of May.  A crowd had gathered, and a great deal of drink was being consumed.  At some point Hogan had noticed a woman who was drunk and very disorderly.  When he remonstrated with her—and possibly manhandled her—she began to cry.  Just then young Horgan, seeing the woman’s distress, intervened, demanding that the constable leave her alone.  He had the support of other boys, who had been responsible for much of the bad behaviour of the crowd, and who now joined him in barracking Hogan, shouting and hallooing.  By now the woman had left the scene, but the constable lost his patience, and he took Horgan into custody. 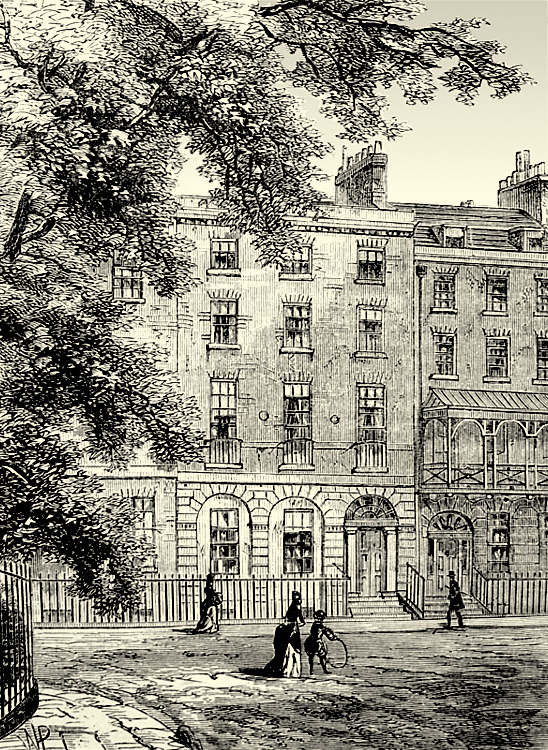 When the matter came before the magistrate—Sir Thomas Henry—some interesting facts emerged.  The disturbance, it would seem, was not a one-off.  On the contrary, crowds had been descending on Woburn Square for a number of nights, downing alcohol, whooping and bellowing, arguing and scrapping, and generally annoying residents until a late hour.  The rioters were rough customers, and the trouble was chiefly caused by boys like young Frederic Horgan.  And the reason for these nightly assemblies?  Well, it was obvious: the crowds were there to see the ghost.  The Ghost of Woburn Square.

THE RESPECTABLE …
On the maps of the time—say Stanford’s 1864 Library Map of London and its Suburbs—Woburn Square is one of several green spaces in the vicinity of the British Museum and University College.  Gordon Square and Tavistock Square lie to the north, Torrington Square to the west, and Russell Square to the south.  Along its east side once stood Christ Church, a chapel of ease attached to the parish church of St George’s.  Christ Church has now been demolished, but it was there in 1867, towering over the crowds cavorting on those tumultuous nights at the end of May. 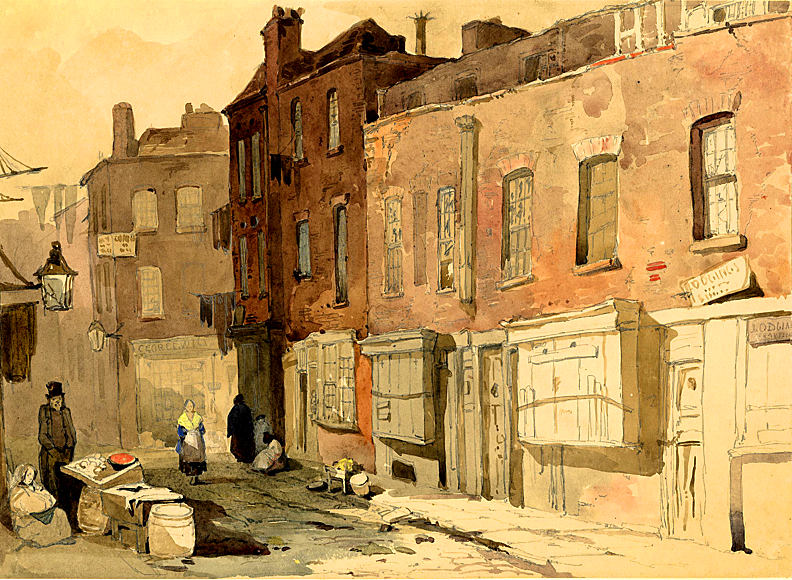 Woburn Square had been built in the 1820s by the Sims, a family of speculative builders, on land that had previously been little more than a swamp.  The houses in 1867 were solidly respectable family homes.  They had room in them for servants, and the servants were housemaids and parlour maids, cooks, nurses and page boys.  There were some notable residents, among them the writer George W M Reynolds, who lived at no.41, and the philanthropist Sir George Williams, who lived a few doors further up the street at no.30.

… AND THE ROUGH
Certainly the residents of Woburn Square would have had little time for the drunken antics of the rioters.  There had been strongly worded complaints, which had prompted E Division to instruct its constables to deal with the problem.  The guardians of law and order, and, in the case of Woburn Square, of well-heeled tranquillity, had been sent out “for the special service”—in the words of The Times—“of maintaining order and making the populace move on”.  All of which explains why Constable Hogan acted as he did, making an inebriated member of the populace move on, and in the process incurring the wrath of several other inebriated members of the populace.

Matters were not helped by the proximity to Woburn Square of St Giles, which lay just to the south.  St Giles, a sprawl of mean alleys and passages leading to menacing courts, was a notorious and dangerous rookery.  Not surprisingly, descriptions of the Woburn Square crowds in the rather sniffy newspaper reports reflected the prejudices of respectable society against the lower classes, and betrayed an element of fear that was in all likelihood well-founded.  “The noisy and ragged population of St Giles,” trumpeted one.  “Boys and other idlers,” declared another.  “Roughs,” pronounced a third.  Whatever else was going on, there was more than a suggestion of class warfare.

WHERE IS IT?
But the putative cause of the trouble, as said above, was the ghost.  The rumour that had being going the rounds was that the spectre of a woman was to be seen floating around in the north east corner of the enclosed gardens.  As the days went by the rumour became more detailed.  The ghost was a regular “woman in white” sporting a nerve-jangling sheet.  It was ten feet high, with glaring eyes the size of soup plates, set in a monstrous donkey-like head.  It lived in the churchyard of St Pancras Old Church, crossing the Euston Road in order to haunt the genteel streets of the Bloomsbury Estate. 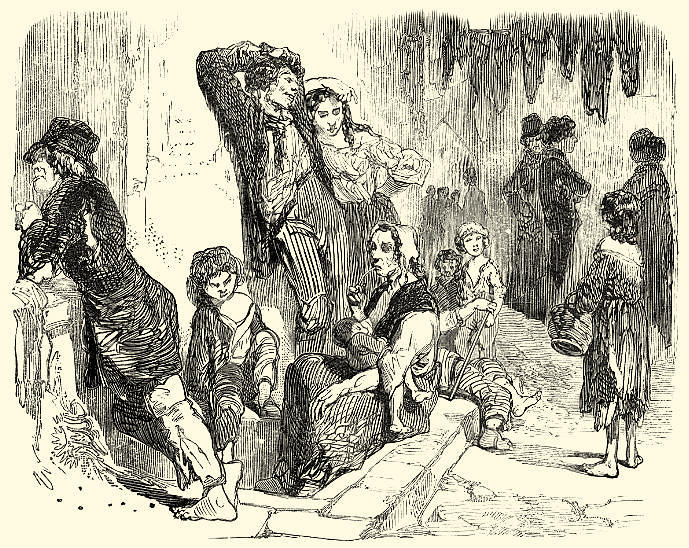 Men, women and children of the St Giles rookery.  Image in Thomas Beames The Rookeries of London (1852) between pages 22 and 23.

The problem was that really there was not very much to see.  The sensation seekers who peered through the railings of the square, night after night, either got only a brief glimpse of the apparition they had heard so much about, or found themselves staring fruitlessly at a clump of shadowy trees.  Then the bad behaviour began.  While many in the crowd simply enjoyed what was now an opportunity for noisy horse-play, some went knocking on and kicking at doors in the hope of provoking the ghost to make an appearance.  Two old ladies, it was reported, who for reasons of health were in need of complete peace and quiet, were particularly inconvenienced.

A gentleman who had been watching the riots from his balcony went steaming down into the street.  He caught three young rioters, but released them when they gave him their solemn assurance that they would not misbehave again.  In the end, though, the nuisance grew so serious that the police took action.  A small army of constables, of whom James Hogan was one, took possession of the square.  They gave free passage to citizens who were using the square simply to get from A to B, while ordering all trouble-makers to make themselves scarce, the object of the exercise being to clear the square entirely.  They met with considerable resistance from the rioters, who stood shoulder to shoulder in a show of defiance.  They were pushed and shoved, kicked from behind, and pelted with mud and stones.  Most of the difficult cases were boys, and their youth did not deter two of them from using their fists against the coppers who were giving them grief.  Those who were whipping up the disorder—the ringleaders, as it were—were arrested. 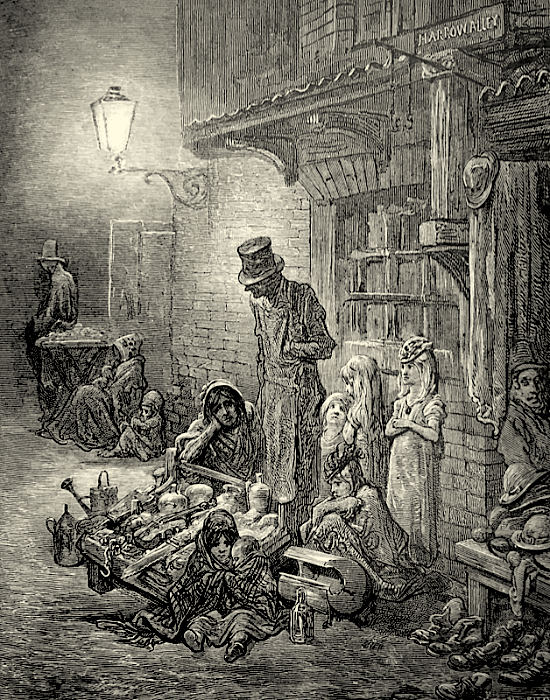 The light of a gas lamp, not in Woburn Square, alas, but in Houndsditch in the East End.  Image by Gustave Doré in Blanchard Jerrold London: A Pilgrimage (1872) between pages 126 and 127.

A GHOSTLY LIGHT
While all this was going on, the phenomenon of the ghost was being investigated, and newspapers and journals were quick to publish the outcome.  The following explanation—typical of many—appeared in the Lancet:

After a visit to the spot, we can affirm that the whole evidence of anything out of the common is confined to the existence of a patch of light falling upon an arbour at the north-east corner of the enclosure, and which is perfectly evident to any one looking through the railings on the west side of the square near the spot.  This light is, we believe, nothing more than that thrown by a gas lamp at the north end of the square, and which, passing through a gap in the shrubs, is cast in a somewhat remarkable manner upon the spot in question.

Presumably the impression of a ghostly human form was created by the light of the gas lamp passing through the branches of trees in the square.

Some maintained that the illusion had been deliberately masterminded by mischievous individuals, and fingers were pointed at medical students—the usual suspects when trouble is afoot—fiddling with a magic lantern in the attic of a nearby house.  Possibly it was to counter this slur on the profession that the Lancet proposed its street light theory, and recommended that the offending gas lamp be extinguished, temporarily, until the fuss died down.  No light from the lamp, no ghost: no ghost, no crowds. 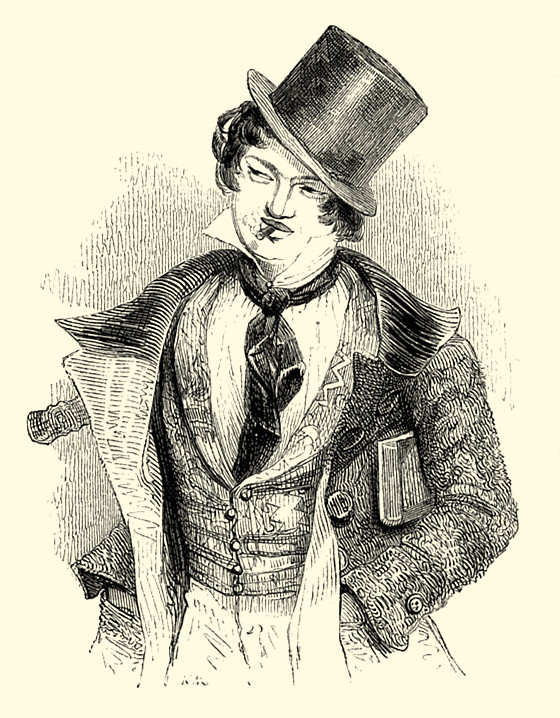 BROUGHT TO BOOK
Young Frederic Horgan was not the only malefactor to be dragged into the police court in Bow Street, and on Friday the 31st of May nine more rioters, ranging in age from seventeen to twenty-five, were named by the newspapers.  William Durham, who had “slightly assaulted” a constable, was sentenced to one day in prison.  John Brown had also assaulted a constable: he was fined ten shillings with the option of a seven-day stint in prison.  Arthur Knight and George Young were each bound over in the sum of ten pounds to be “of good behaviour” for six months.  Frederic Cousins and Henry Jackson were each fined seven shillings for kicking at doors.  The others—George Can, Walter Solomon and George Spencer—were let off with a caution.  Horgan, incidentally, had suffered the humiliation of seeing the carpenter he worked for summoned to keep an eye on him.  The carpenter was bound over in the sum of ten pounds.  No doubt he was not amused.

Two other youths, Samuel Ekens and Solomon Denekamp, were brought before the court the following day.  Samuel’s mother put up a spirited defence, claiming that he was a good lad, really, who had never been in trouble before.  The magistrate, Mr Frederick Flowers, batted this testimonial away with lofty disdain, suggesting that in common with the other rioters Samuel had gone to Woburn Square not to see the ghost but to enjoy the mayhem.  He had no more patience with Mrs Denekamp, who claimed that Solomon had been falsely arrested by a constable when he was taking a short cut through the square, perfectly innocently, on his way home from synagogue.  The magistrate obviously thought that the wool was being pulled over his eyes, for he dismissed Solomon’s mother with the curt comment that “respectable” people were as capable of antisocial behaviour as anyone else.  He then ruled that the prisoners must each pay a ten shilling fine, or go down for seven days. 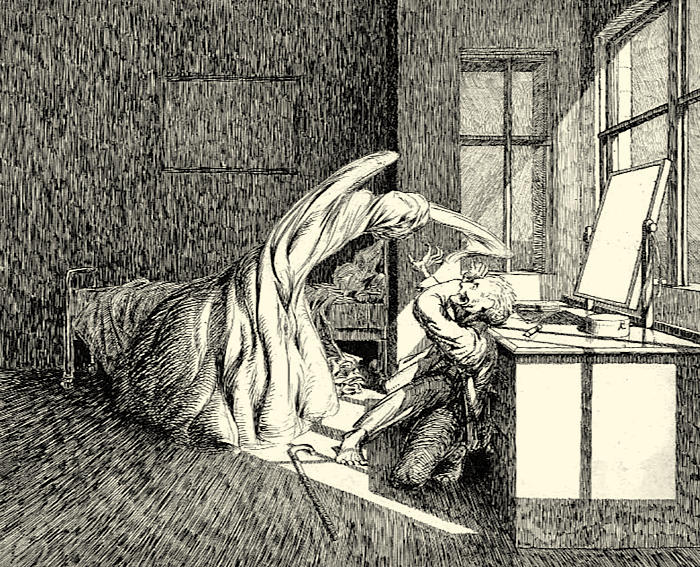 The classic ghost, draped in a white sheet.  Image by James McBryde in M R James Ghost Stories of an Antiquary (1905 edition) between pages 222 and 223.

INTO THIN AIR
No one ever got to the bottom of the apparition itself, and, while theories of gas lights and magic lanterns were being hotly debated, a rumour went round that the ghost had been a practical joker dressed in a white sheet.  Mr Vaughan took a dim view of the matter, opining that “a good thrashing” would soon dissuade a practical joker from wilfully causing such trouble.  Old school stuff.  But the vengeful magistrate was denied the satisfaction of administering corporal punishment, for no human agent was ever caught.  Perhaps, after all, it was just a trick of the light.  In any case, the ghost did what ghosts do best, vanishing into thin air.

Haunted by Sadness, or, Is 50 Berkeley Square London’s most Ghost-Ridden House?

The Bermondsey Ghost, or, Terror on Jacob’s Island