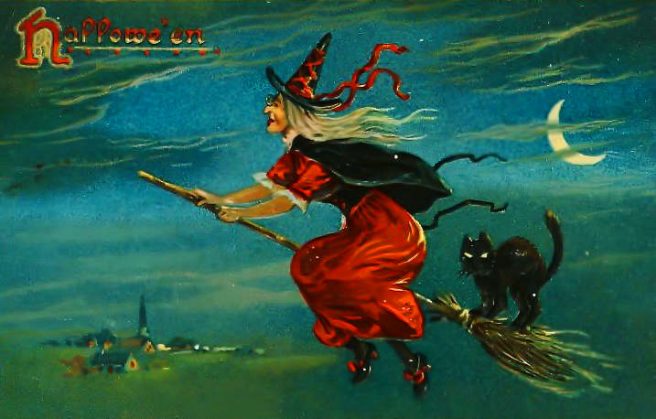 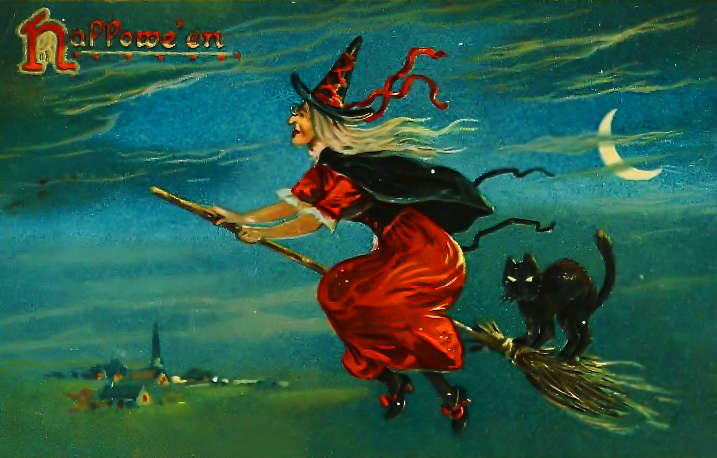 In 1821 Mary Calder, an elderly widow, inhabited a house in New Court, just off Moor Lane.  Renting out the first and second floors, she kept the ground floor or parlour floor for her own use, and supplemented her income by taking in washing.  Her lodgers on the first floor were a Mrs Walcot and her attractive and lively young daughter, Miss Walcot.  The Walcots were close friends of Mrs Dale, who lived on the second floor with her husband.  Mr Dale was a nervous man, not only because he owed the landlady ten weeks’ rent, but also because the old lady had threatened to “set God’s curse on him for attempting to cheat the helpless and the widow” if he did not pay up immediately.  Mammy Calder, as she was respectfully known, may have been a widow, but she certainly was not helpless.  Her neighbours, although modern people living in a great metropolis, described her as a terror, and whispered that she was a witch. 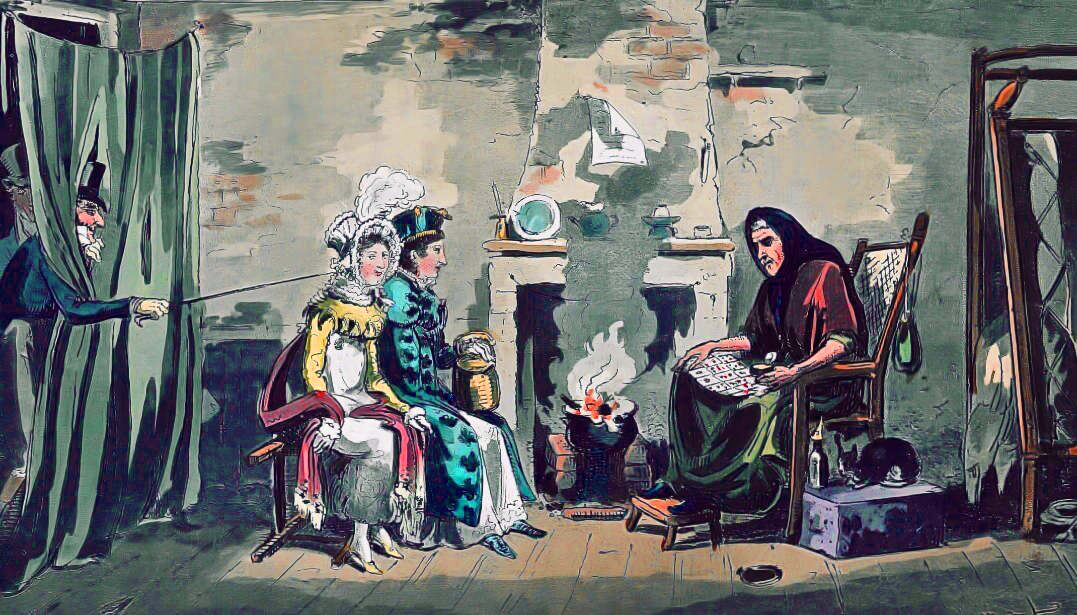 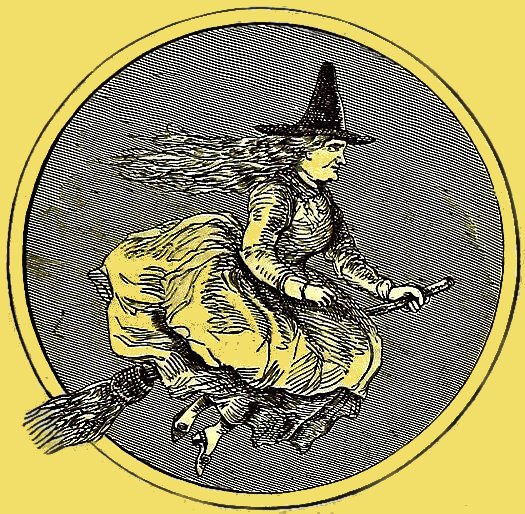 Image of a witch in William Makepeace Thackeray The Virginians volume1 (1858) page 317.

Mammy was not to be insulted, and insisted that the witch model be taken down immediately.  Laughing, the triumvirate refused, and blocked the way when Mammy tried to force her way into the Walcots’ room.  But she was not going to be beaten: she might be old but she was strong, thanks either to the laundering she did or to her supernatural powers.  When Miss Walcot stepped forward, the Witch of Moorgate gave her a wallop, attacked her with “fists and nails”, and pulled her about the room by her lovely long hair.  There is no record of what Mrs Walcot and Mrs Dale did, but the mini-Mammy was brought in from outside. 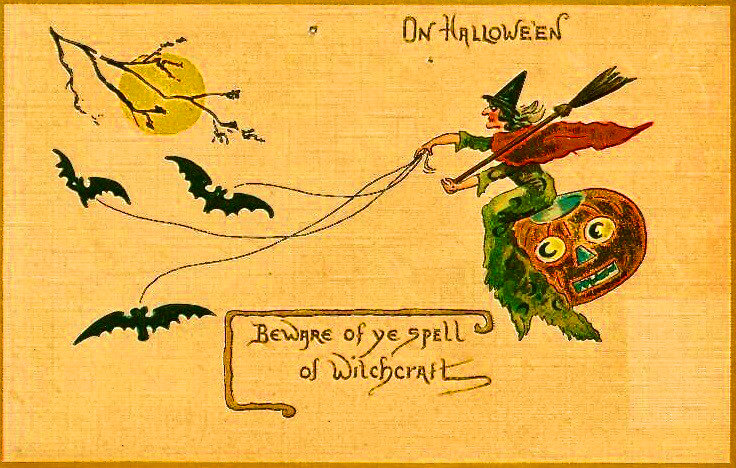 Mammy denied being a conjuror or a witch or a fortune teller, insisting that, when she was not feeling too weak or sickly to get out of bed, she earned her living by washing and ironing, and that only the week before Mrs Walcot had paid seven shillings for her services.  Mrs Walcot remarked tartly that the old woman earned more in bed telling fortunes than in honest labour.  Mammy replied that it was not her fault if her gift for shuffling the cards had her grateful neighbours insisting on doing her work in exchange for a glimpse into their future. 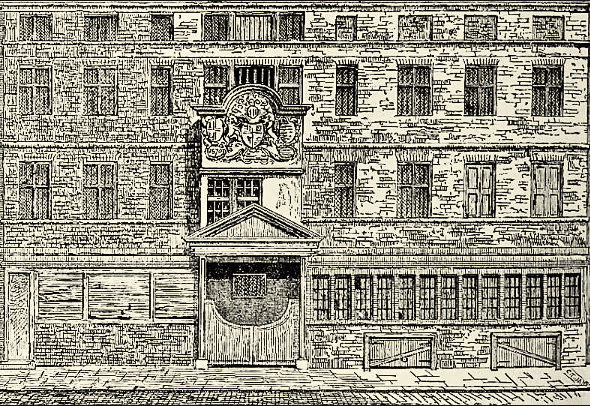 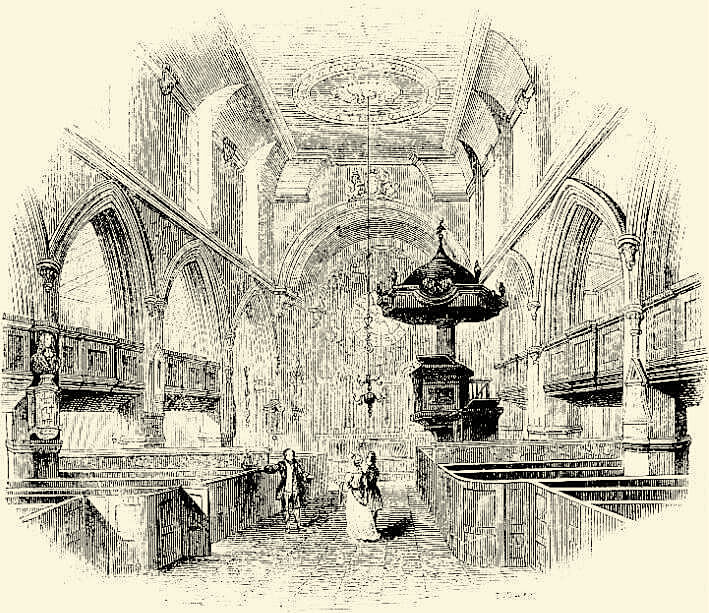 Mammy Calder has been a fairly elusive subject.  The chances are that she was the widowed Mary Hall who married Daniel Calder/Caulder in St Giles Cripplegate in 1808, only to die and be buried in the same church eight years later.  I cannot help wondering if she ever got her rent money or the lodgers had all disappeared before she was released from the Compter.

SOURCES
My research for this post was carried out principally in contemporary newspapers and on Ancestry.