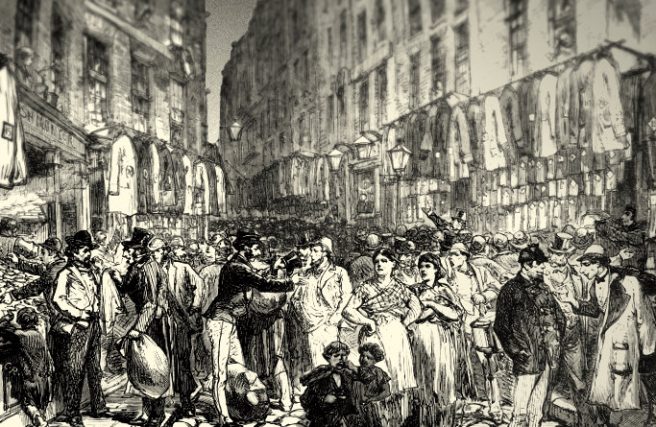 In the winter of 1848 a rather melancholy case came before the magistrate’s court in Worship Street in Shoreditch.  Presiding over the court was Mr John Hammill.

The complainant was a man by the name of Saunders.  He was a dealer in furs, with premises in the Whitechapel Road in the East End.  The defendant was one Eliza Wilmot, and we know very little about her.  But the case was reported in the press—in the Morning Advertiser on the 19th of February—and so we do at least have a description of Eliza.  She was a pauper, and was “care worn” and “emaciated”.  Her clothing was “neat but scanty”, and the Advertiser wondered if she might have been respectable at some point in her life.  Clearly, though, she had fallen on very hard times.

What was the charge? Well, we will come to that later.  For the moment it is sufficient to record what Eliza Wilmot had done to be in such deep trouble.  To cut a long story short, at six o’clock one evening she had walked up to Mr Saunders’s shop with a large stone in her hand.  She had thrown the stone with all her might, which did not amount to very much, so wretched was her condition.  And the stone had gone sailing—at no great speed—towards the window. 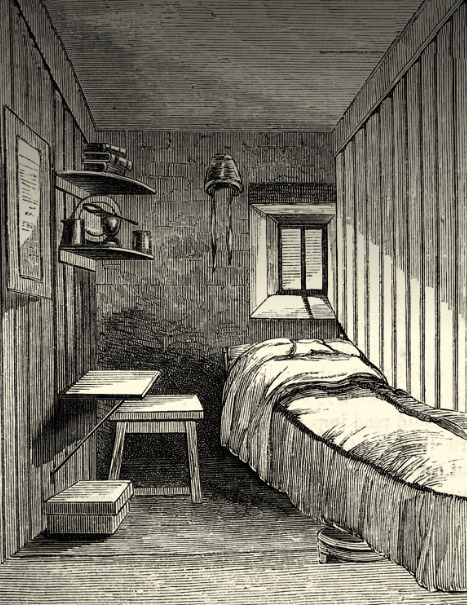 A “sleeping cell” in the women’s prison at Brixton.  Image in Henry Mayhew and John Binny The Criminal Prisons of London (1862) page 181.

PRISON PLEASE!
But before we go on with our story, and before Eliza’s stone reaches its destination, we must digress for a moment.  If you read our recent piece on the soup kitchen in Leicester Square, you will remember that at about this time the smashing of windows in public places was a frequent occurrence.  In many cases it was a form of public protest against conditions endured by the poor, which were at least in part a consequence of the Irish potato famine, and the mass migrations from Ireland that followed in its wake.

But the smashing of windows served another—and unexpected—purpose.  Take the following incident.  On New Year’s Day in 1850 four London women were hauled into court for throwing stones through the plate glass of a shop front.  The judge, who had been assaulted by one of the women on a previous occasion, took a dim view of the matter.  “He knew”—or so it was reported by The Times—“their object was to get into a prison to be maintained at the public charge.”  They preferred prison to the workhouse and both prison and the workhouse to starvation.  According to the judge, the women had a reputation for smashing windows, which they did not do on impulse.  Their intention was to smash “the handsomest shop fronts” in order to secure longer terms of impriosnment. 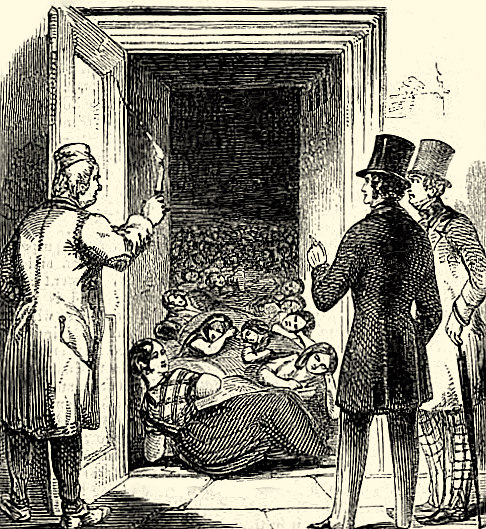 Prison for a woman convicted at Worship Street was the Female House of Correction at Holloway. When the journalists Henry Mayhew and John Binny visited Holloway for the survey of London prisons that they published in the early 1860s, they made a detailed note of the prison clothing, which consisted of

three wincey petticoats in winter, and two in summer; a blue gown, a checked apron, a blue checked neckerchief, a small printed pocket handkerchief, and a white linen cap.  Likewise a pair of blue worsted stockings, and a thick substantial shawl.

The two journalists saw prisoners walking “with active step” in the exercise ground, and listed their various occupations as oakum picking, needlework and knitting, laundering and cleaning, and nursing in the infirmary.  The prisoners working in the laundry were drinking beer—they were allowed a pint every day—when the two visitors entered.  Really one wonders if prisons were so very worse than workhouses, where women were employed in much the same tasks, and wore uniforms that were just as coarse and drab.  The regime in workhouses was notoriously harsh, and it may be that even a spell in a house of correction was less to be feared than the dreaded descent into poor law establishments.

THE WOLF AT THE DOOR
The stone had almost reached its target.  As we have seen, it had been thrown by a poor woman who was weak with hunger.  She was also not the sort of woman one might expect to throw stones, for she had an air of respectability, and we know that at one time she had been a dressmaker.  She was not an obvious criminal. 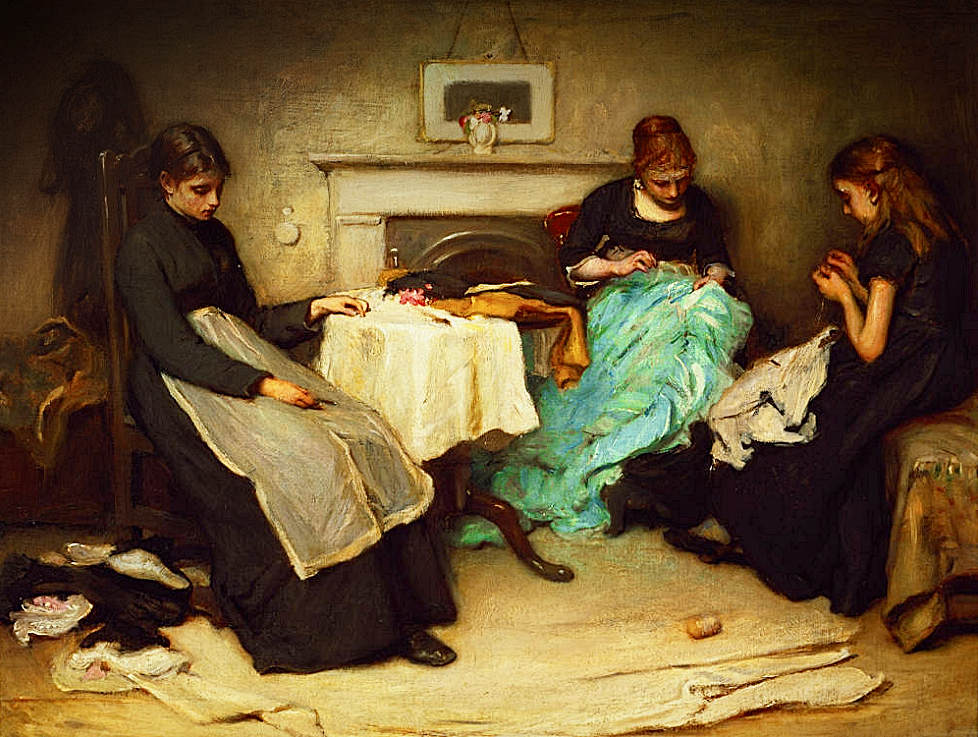 The dressmaker was a worker of enormous significance.  She might be employed as an assistant in a “house”, or she might work on her own account and try, like Eliza, to run a business.  Either way, the work was hard, and the hours were long.  The journalist James Grant, a devout Calvinist, was horrified by the “pale countenances, haggard looks, and general lifelessness of appearance” of the dressmakers who toiled in cramped conditions.  He sympathised with the young women who—again like Eliza, who was from Bristol—came up to London from the provinces to serve apprenticeships “with the bloom of health on their cheeks, a flow of animal spirits in their manner and conversation, and a general appearance of life about them, which were delightful to witness”.

And it was in the hope of setting herself up as a dressmaker that Eliza had arrived some time ago in the capital.  She had taken lodgings in Westminster, but she had no friends, and she found that she could not earn enough to keep the wolf from the door.  She suffered terrible privations, wandering about the streets feeling lonely and wretchedly hungry.  Then, on the point of starving, she went to the parish workhouse, where she applied for relief.  The relieving officer, a kind man, gave her sixpence.  But he warned her that there was nothing more that he could do for her.  If she entered the workhouse, it would have to be in her home parish.  She would have to make her way back to Bristol. 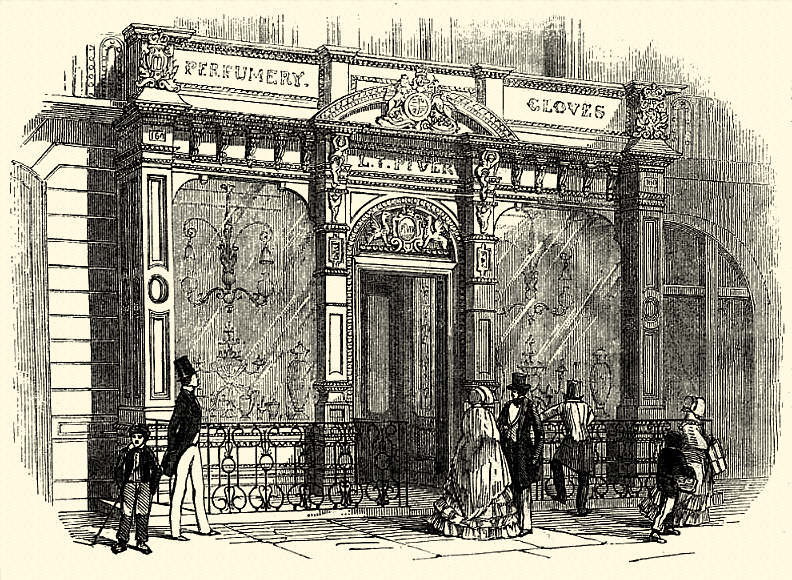 Smashing these windows in Regent’s Street would certainly have met with a long prison sentence.  Image in The Illustrated London News 22 August 1846.

A SERIOUS MATTER
When Eliza’s stone hit Mr Saunders’s window, a remarkable thing happened.  The stone, striking the pane, bounced off and dropped harmlessly to the ground.  Poor Eliza, so pitifully thin, had not sufficient strength even to smash glass.

Inside the shop Mr Saunders’s assistant, a man by the name of Slate, had heard the stone thudding against the glass.  Dashing into the street, he confronted Eliza.  She immediately admitted trying to smash the window, explaining that she had done so precisely in order to be arrested.  A few days or weeks in prison, and even transportation, would be more easily endured than abject poverty.

Slate inspected the window.  The stone had not cracked the glass but it had damaged it.  According to The Morning Advertiser the damage amounted to between two and three pounds—several hundred in today’s money—which made it a serious matter.  Slate marched Eliza off to the nearest police station.

At the station Inspector Ellis of H Division—the Whitechapel force—took Eliza into custody.  He began to question her, and he was shocked to see that she was so frail that she could hardly stand.  Even speaking was an effort, but he gathered that Eliza had last eaten forty-eight hours ago when some kind person, noticing her as she wandered through the streets, had given her thruppence.  She had bought a loaf for a penny, and a night in a lodging house for two.

The House of Correction at Holloway.  Image in Henry Mayhew and John Binny The Criminal Prisons of London (1862) page 34.

A FUTILE GESTURE
While Eliza was telling her story, Mr Saunders had been summoned.  He now arrived at the police station, where it was explained to him, in line with due procedure, what charges he was entitled to bring against the prisoner.

Saunders, moved to pity by the spectacle of human suffering, refused to press charges. Whereupon Eliza said that his compassion would achieve nothing: she was so utterly destitute that she would soon resort to crime again.  With Saunders’s magnanimity rendered ineffectual, she was committed for trial.

At the trial—in the court at Worship Street, as noted at the outset—the magistrate put principle before sentiment.  Eliza’s were indeed distressing circumstances, and deserving of commiseration, but they did not entitle her to break the law.  He ordered her to pay a penalty of twenty shillings, failing which—and she very obviously would fail to find such a sum—she would be sent for twenty-one days to the House of Correction.  “The prisoner,” it was reported by the Advertiser, “bowed to the Magistrate with an air of quiet resignation.”  Did she feel, perhaps, that the strange charity that she had looked for had in the end come at too high a personal price?

Killed by a Corset? The Tragic Tale of Kitty Tyrrell, a Victorian Actress