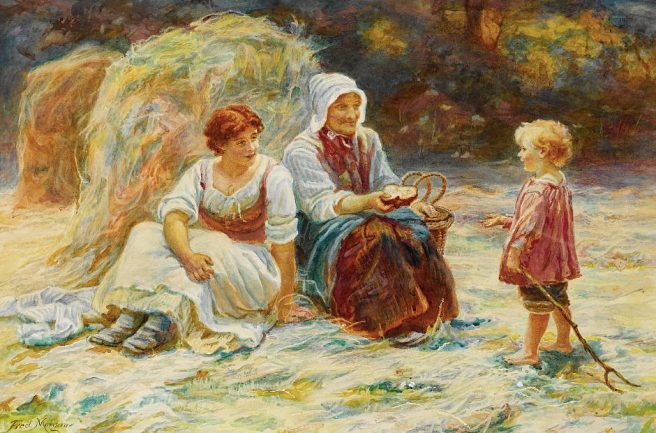 View of the pond at Merton Abbey with William Morris’s works in the background.  Watercolour by Lexden Lewis Pocock dated after 1881.

On the 22nd of June 1846—a Monday—a rather unpleasant incident occurred in Wimbledon.  The scene was a spot on the banks of the River Wandle, which cuts its way through the south western outreaches of London, until it flows out into the Thames in the northern reaches of Wandsworth.

At the time of our story the Wandle was heavily industrialised, with over sixty watermills powering works of one sort or another, some grinding dried tobacco leaves for snuff, others driving the machinery used in the printing of silk and calico.  In the 1880s William Morris would operate a model factory in the pleasant rural setting of Merton, using the alkaline water of the chalk stream of the Wandle to wash his beautifully designed fabrics.

The river also provided power for the copper mills that had been operating on its east bank at Summerstown in Wimbledon for over two centuries.  The clutter of buildings that made up these premises comprised three water wheels, a rolling mill and a hammer mill, a refinery and foundry fitted out with three furnaces, and dwellings for the manager and his workmen, who at the time of our story numbered about a dozen.  Around the works lay fields, and it was here, in a quiet stretch of the Wandle, that two young men and two boys came to bathe on the warm summer’s day in question. 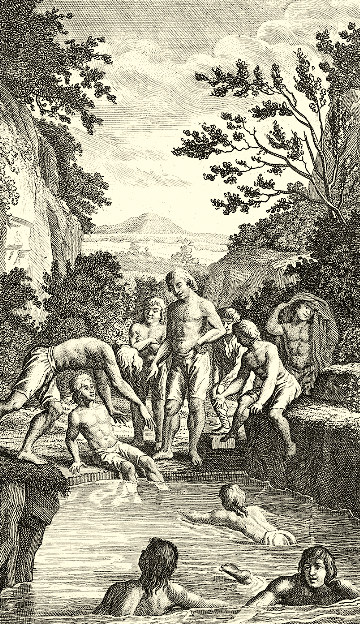 Boys bathing and swimming au naturel.   Image in the English edition of Christian Gotthilf Salzmann Gymnastics for Youth (1800) between pages 338 and 339.

IF I COULD GET AT YOU!
The grass in the field had been cut, and was lying on the ground, ready to be turned.  But as they looked in all directions the four bathers saw not a soul.  They had the field—and the river—to themselves.  They undressed, and stashed their clothes in four heaps on the grass.  They craved relief from the heat—the past two days had seen unbroken sunshine, and the temperature was well into the twenties—and they waded into the water.

The two young men were both medical, and they were associated with the same local doctor, one as his assistant, and the other as an articled student.  The two boys were brothers, and were at school at a private academy in a village at no great distance from the river.  How the medical men knew the two boys is not clear, but it is possible that the school fell within their practice.  What is clear, though, is that the boys had gone to the river without the permission of their headmaster.  In other words, they were enjoying something of an escapade.

And, as escapades so often do, it went horribly wrong.  The foursome had finished bathing, and only the medical student was still in the water.  The others were getting ready to put their clothes on when suddenly, without warning, they were attacked.  Where before they had had the field to themselves, with no-one else in sight, they now realised that they had unexpected, and very unwelcome, company.

Three men, who they had never seen before, were charging towards them, shouting loudly.  Behind them came several other men, and women too.  The junior doctor felt himself taken hold off, and he fought back, but his three assailants were too powerful.  After a struggle he was thrown into the river, and, as he thrashed around in the water, he was struck by a heavy piece of wood that had been hurled at him.  Meanwhile one of the two schoolboys was grabbed round the waist.  He too was then pushed into the river, and his brother, who had received a violent shove, came tumbling in after him.

The medical student, who had not yet returned to the bank, was safe from attack.  “If I could get at you,” shouted one of the attackers, who was carrying a hay-fork, “I would stick you!”  The gang picked up his clothes and threw them into the river, and they then threw in all the other clothes before marching off, clearly pleased with their work.  The disconsolate bathers tried to retrieve their belongings, but several items of clothing could not be found.  Some money had sunk without trace, and a gold watch belonging to one of the schoolboys had disappeared into the murky waters of the Wandle. 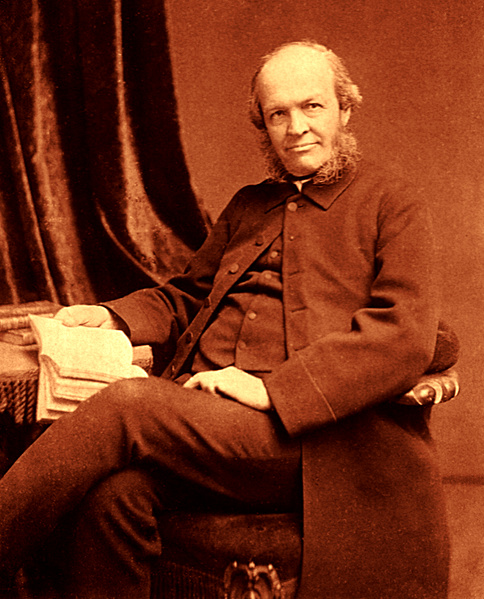 George Clive in about 1870.  Photograph by Abraham Thomas of the Cathedral Studio in Gloucester.

NOT EXACTLY UNPROVOKED
The incident came to court.  Two of the attackers were brought before the Wandsworth magistrate, George Clive.  They were both labourers.  One was called Robert Learner.  The other—the man with the hay-fork—was William Elms.  When the complainants were asked to identify themselves, the doctor’s assistant gave his name as Samuel Knaggs.  The student was Said Assaid: he had come to England from Syria on a government scholarship.  The schoolboys were called John and Peter.  They were Italian—Giovanni and Pietro or Piero—and their surname was Casciaro.

At this point, of course, we are left with the unpleasant feeling that the bathers were the victims of a particularly spiteful attitude.  Maybe their leisurely enjoyment had got under the skin of men labouring in the heat.  Maybe they were too obviously not members of the labouring classes—the boy with the gold watch was presumably dressed to match—and presented their attackers with the chance of a spot of mean-spirited sport.  Maybe a young man of Syrian origin, and maybe even two boys from the Mediterranean, were conspicuous targets.  Was the attack fuelled by simple xenophobia?

Whatever theories might have been forming in the mind of the Wandsworth magistrate, Learner and Elms, who responded robustly to the charges made against them, succeeded in complicating the issue.  Their defence turned initially on the fact that the bathers had chosen a field where women would clearly be working.  The time of year—the hay harvest—made it inevitable.  They must have known, argued the two defendants, that they would be undressing in full view of these women.  The solitude they insisted they had been enjoying was a complete fiction.

Then again, Learner and Elms continued, they had not in fact acted in the way described by Knaggs and Assaid.  When the bathers began to undress they were seen by the women, and the women were offended.  In response several men went off to deal with them, but the defendants denied that they had been ringleaders.  Learner had not been involved at all, or so he said.  Elms at first denied being anywhere near the scene until the ugly little confrontation was over.  Later he retracted this denial, but he still insisted that he had only thrown a shirt or a towel into the water.

Leaner and Elms had effectively turned the case on its head.  Although there had clearly been a scuffle, they had shifted the real blame for the incident from the men in the field to the bathers in the river.  What had come across in the charges made against them as mindless hooliganism—and possible hooliganism with a nasty edge to it—now had a rather different centre of gravity.

The real offenders, they argued, were the young medical gentlemen and their schoolboy companions, who had to all intents and purposes exposed themselves to the women working in the field, no doubt for a laugh.  Their assailants, on the other hand, had acted with a sort of manly directness, defending the modesty of honest working women.

To complicate matters, a witness for the defence, who had been in the field at the time of the incident, offered some disturbing evidence.  In the first place, the water in that stretch of the river was so shallow that Knaggs and Assaid could not be possibly have avoided being on full display.  Furthermore, there were women within a few yards of them when they waded through the water.  And in any case, the witness went on, he had seen neither Learner nor Elms throw anyone in the river. 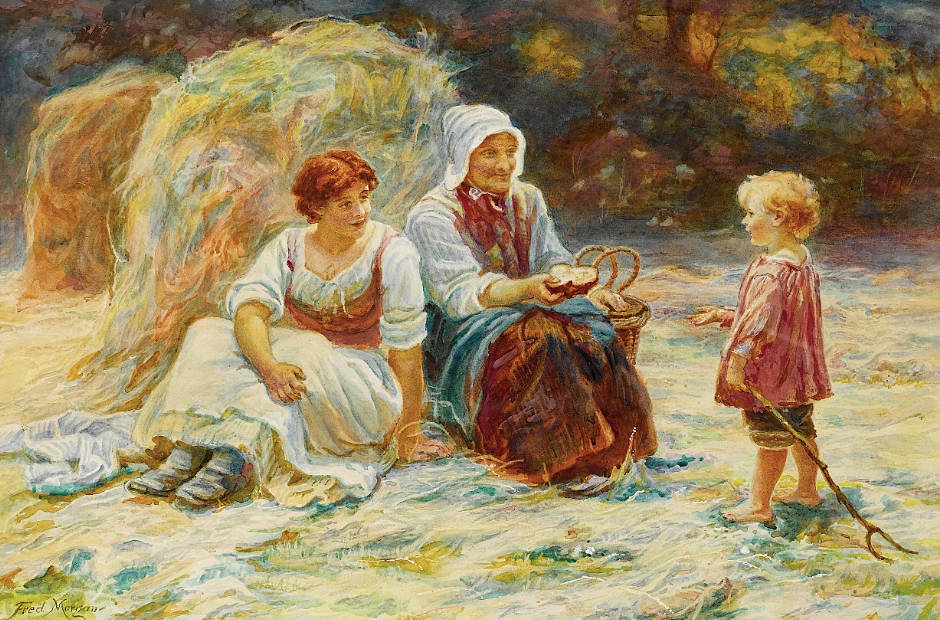 Two haymakers resting with a child in the midday heat.  Watercolour with gouache by Frederick Morgan.

NOT EXACTLY PROVOKED
The turning point came when four of the women who had been working in the field were called to give evidence.  Clearly Learner and Elms were expecting the witnesses to speak on their behalf.  If the witnesses said that the four bathers had paraded themselves before them, provocatively and tauntingly, the assailants might be viewed less disapprovingly.  They might even be seen to have acted honourably.

However, the corroboration the defendants were looking for did not materialise.  For the women swore that they had been more than a hundred yards away from the bathers.  They had seen nothing that might cause them serious offence.  The only support they gave to Learner and Elms was that they had seen neither pitching any of the four bathers into the water.

Clive, the magistrate, gave the matter his fullest consideration.  When eventually he addressed the court, he made the point that indecent exposure was indecent exposure irrespective of “the ranks of the persons insulted”.  He was about to disappoint anyone who held the view that the sensibilities of women labourers could simply be discounted.  Equally, he explained, those who believed that men who behaved indecently towards women deserved a sound thrashing should make no exceptions on grounds of class.  A woman in a field with sweat on her brow deserved as much respect as any other.

This suggests that Clive might have exercised leniency towards Learner and Elms if it had been shown that Knaggs and Assaid had behaved provocatively.  But it had not been shown.  The four women had seen nothing to offend them, and their male companions, in making a brutal attack on the bathers, had acted without justification.  Certainly the two schoolboys could not sensibly be accused of indecency towards grown women.

SOMEONE HAS TO PAY
What emerges from this rather sorry tale is that the magistrate applied subtle reasoning to the case, and that he held strong views on the right of all women not suffer harassment at the hands of men.  On the other hand, he was not prepared to dismiss the charges on grounds of insufficient consistency in the statements he had heard.  One party or the other—Knaggs and Assaid on the one hand, Learner and Elms on the other—had to bear responsibility.  And he certainly knew which party that was going to be.

The two labourers were accordingly found guilty.  Elms was considered the worse offender, and he was fined forty shillings, payment of which would spare him a month-long spell in gaol.  For Learner the punishment was less severe: twenty shillings, twenty-one days.

And there the matter must rest.  The copper mills have long since gone, and the fields have become city.  But the River Wandle is the same as it was in the year 1846, a reminder, perhaps, that some things never change.