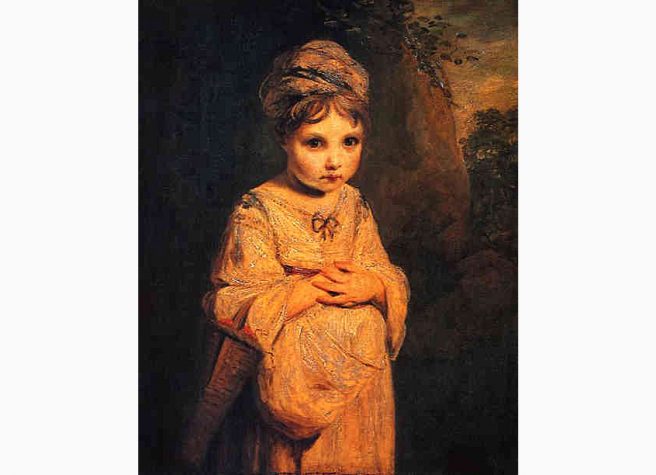 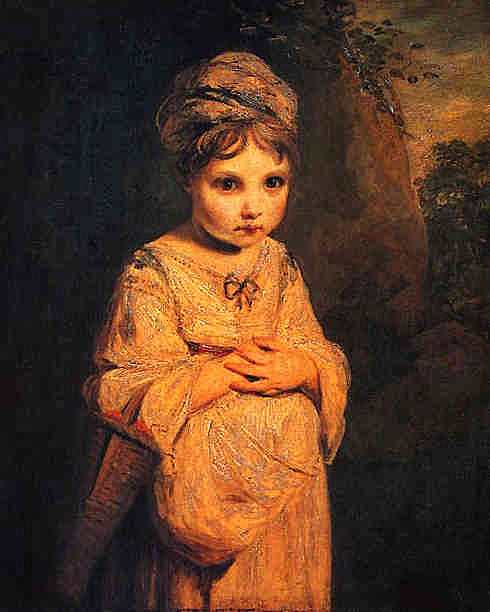 It is hard not to be captivated by Joshua Reynolds’s painting The Strawberry Girl, which hangs in the Wallace Collection at Hertford House in Manchester Square.  When it was exhibited at the Royal Academy in 1773, Horace Walpole jotted down in his copy of the catalogue the single word “charming”, and we can see what that eminent man of taste meant.  The girl stares out at us with childish directness, and, isolated against a rocky background, she looks vulnerable.  Reynolds produced many paintings of children, but he was particularly fond of this one.  He is reported to have said that a lifetime could produce only half a dozen original works.  In this shortest of shortlists he would certainly want to include The Strawberry Girl.

And yet The Strawberry Girl is more than just an enchanting picture. For behind it there lies a fascinating London story.

STRAWBERRY GIRLS BOTH REAL …
The clue to this story is the basket, or “pottle”, that can be seen beneath the girl’s right arm.  This humble object would perhaps have meant rather more to an eighteenth-century viewer than it does to us, for it was an essential piece of equipment for the transporting of fruit, an industry that employed a great many people in Reynolds’s day.  Under the influence of their Dutch counterparts, the English market gardeners were rapidly improving methods of cultivation.  Consequently fruit was being consumed in ever greater quantities, and strawberries—so much a part of the English scene ever since Cardinal Wolsey discovered how to eat them with cream—were no exception.  No doubt the arrival of superior foreign varieties, which growers crossed with the wild native product, enhanced the fruit’s appeal.

The centre of the trade in fruit was London, its voracious demands met by the market gardens in rural districts that are now encompassed by the modern capital.  In his 1792 local history, The Environs of London, Daniel Lysons estimated that 800 acres within twelve miles of the metropolis were given over to the cultivation of fruit for Covent Garden and the other London markets, the areas most favoured by growers being those along the river that benefited from a loamy soil and the easy supply of manure by water-carriage. 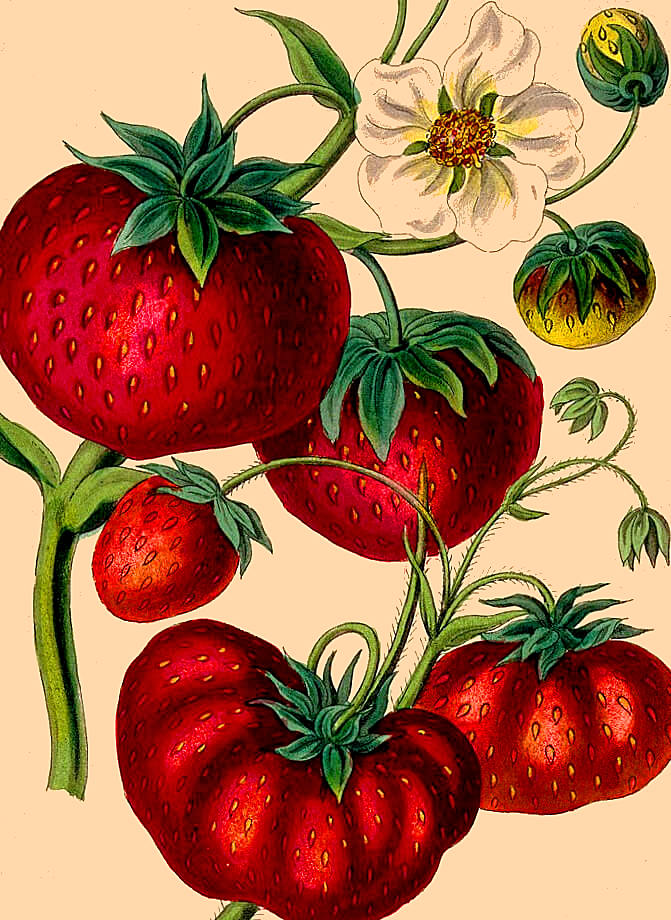 The best fruit to reach Covent Garden was sold to those few outlets that were prepared to pay the highest prices, typically shops in the West End.  The bulk of the produce was simply hawked through the streets, and, if Smollett is to be believed, it was pretty unappealing. Matthew Bramble in The Expedition of Humphrey Clinker is horrified to see “a dirty barrow-bunter”—a woman with a wheelbarrow—“cleaning her dusty fruit with her own spittle”.  He goes on to describe London strawberries as “pallid, contaminated mash”, a condition they are reduced to by being “tossed by greasy paws through twenty baskets crusted with dirt”.  Not especially enticing!

The hard work of carrying fruit from the market gardens to the metropolis was done by women, whose labour was cheaper than men’s.  As the areas with the greatest yield of strawberries were Brentford, Twickenham and lsleworth, the distances the loads had to be carried were considerable.  With a basket of up to fifty pottles balanced on her head, a strawberry woman would set off on a journey of as much as thirteen miles—from Isleworth, for example.  Lesser distances were repeated two, three or even four times a day. Even with a load weighing from forty to fifty pounds she still might walk at a speed contemporary witnesses judged to be five miles an hour.  At the end of a day’s work she would receive no more than nine shillings, depending on the total distance covered. 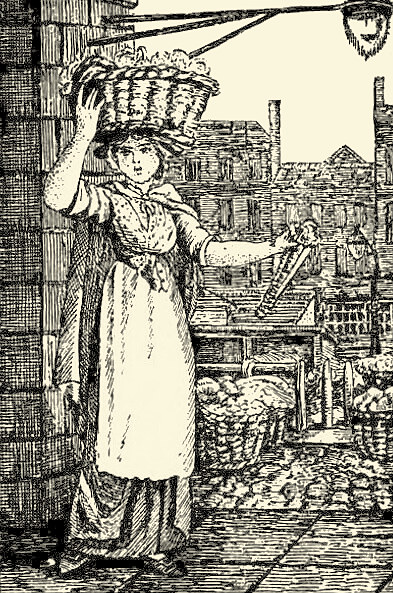 These strawberry women must have been a striking sight, and during the summer months large numbers flocked to the environs of the capital to undertake seasonal work.  Various sources suggest that many came on foot from parts of Shropshire and North Wales, where the sifting and carrying of hard ore at the surface of iron mines, which was their usual work, fitted them for a summer in the fruit gardens of the south.

Understandably, these tough characters were a recognisable type in the late eighteenth century.  They were a byword for honest industry, and because of the nature of their work they were admired for their robust, healthy looks.  Richard Phillips, the radical writer and publisher, thought that “for beauty, symmetry and complexion they are not inferior to the nymphs of Arcadia”.  He admired a work ethic that endured considerable hardship in order to support aged parents or keep offspring out of the workhouse.

Such, then, is the life of hardship and grinding labour that Reynolds’s strawberry girl has apparently—and see below!—been born into.  Not that this is his only painting to hint at the rather sad twilight world of the children of the poor.  Two further experiments in the genre can be seen in the Faringdon Collection at Buscot Park in Oxfordshire. I n Beggar Boy and His Sister a boy in dreary clothes gazes out from the dark. He is trapped, helpless, and a little scared.  Clinging to his back, and all but lost in shadow, is a little sister.  Though not shown in the painting there were other siblings too, all of whom the boy supported by making and mending nets, such as the one he is seen holding.  The companion piece at Buscot, Mercury as a Cut Purse, once again presents a solitary and detached figure.  Despite the whimsical symbolism, the boy’s downcast expression and the drab landscape give the painting the same sentimental immediacy Walpole found so beguiling in The Strawberry Girl. 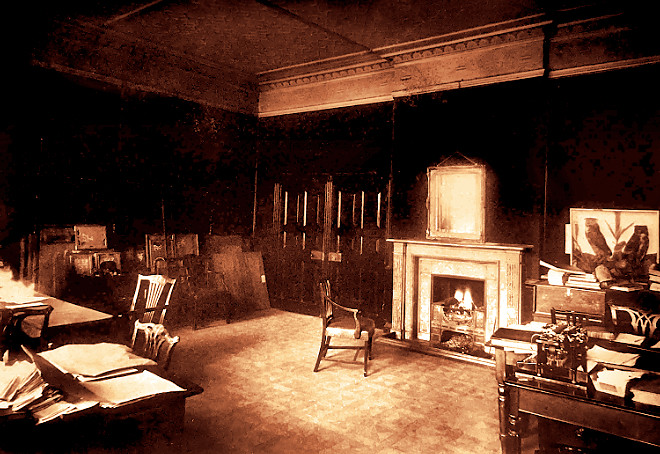 Reynolds’s interest in such subjects is well documented.  His close acquaintance and one-time pupil, the painter James Northcote, recalled that if the great man met a picturesque beggar in the streets, he would direct him or her to his house at no. 47 Leicester Square.  There he would paint them between appointments with his grander subjects, and a plaintive “Sir!—I’m tired” would be heard issuing from the studio at regular intervals.  The anecdote accords well with the curiously vague entries—“boy”, “beggar”, “child”—made by Reynolds in his notebook for the early ’70s.

… AND PRETEND
Is the strawberry girl one of Reynolds’s beggar children?  Almost certainly not.  Her dress of pale muslin, tied with a bow and gathered at the waist with a red sash, and her fashionable turban à la Turque, are more suggestive of wealth than poverty.  Other portraits give clear evidence of Reynolds’s fondness for incongruous settings: the young Lady Catherine Pelham-Clinton, for example, is seen feeding farmyard poultry in immaculate muslin and lace.  Similarly The Strawberry Girl is unlikely to be anything other than a flight of fancy, the paint-and-canvas counterpart to the rustic costume complete with “a little garland or wreath of flowers” that Fanny Burney wore to a masquerade in 1770.

Who then is this little girl, whose costume so ill suits her role?  It used to be thought that she is Theophila (“Offy”) Palmer, a niece of Reynolds.  This identification has now been challenged, though, on the grounds that Offy Palmer would have been too old to be the strawberry girl: in 1773 she would have been sixteen.  Another suggestion is that the sitter is a child who lived near Hopton Hall in Derbyshire, where Reynolds had once travelled to paint the incumbent, Phillip Gell.  Probably her identity is lost forever.

LEAVING THE LAND
Which may not matter.  For the real point about the painting is not who but what it portrays, and that is the inevitable passage of time.  In other words it is a vanitas.  Before long the girl will grow into a woman, and the years will see to it that her childhood is lost for good.

Some such moral—loss of childhood innocence as the disappearance of an Arcadia—would certainly be appropriate to the later decades of the eighteenth century, an age that saw Blake’s Songs of Innocence and of Experience and Goldsmith’s The Deserted Village.  In point of fact Goldsmith dedicated his poem to Reynolds, and its lament for a way of life retreating before the onset of commercial progress was born of the same nostalgia as paintings like The Strawberry Girl:

And, trembling, shrinking from the spoiler’s hand,
Far, far away thy children leave the land.

Whatever is the case, The Strawberry Girl is one of Reynolds’s best loved works.  It was sold in 1796 to a John Willett-Willett for £81 18s, but, when it passed to the 4th Marquis of Hertford (Richard Seymour-Conway) some sixty years later, it went for the princely sum of £2,215.  Corresponding with his agent Samuel Mawson, the Marquis wryly commented that he “should be sorry to have a large basket at that price”—an allusion to the pottle—but he made it perfectly clear that this acquisition gave him very great pleasure.

GONE TOO SOON
But the story has a sad ending.  As is well known, Reynolds attempted to emulate the effects of the Old Masters, but his use of fugitive colours and faulty media caused a number of images to deteriorate.  A particularly distressing example of the results of these experiments is A Girl with a Baby, resting in a very poor state in the Dulwich Picture Gallery in South East London.  Even in his lifetime Reynolds’ s transient canvasses were much commented on, and he was not spared a certain satirical attention.

The point is well made by an anecdote about Charles Moore, the 1st Marquess of Drogheda, which we owe to the Rev Henry Crowe.  The Marquis, who sat for Reynolds in 1761, led a riotous life abroad for some thirty years until he “became bilious, and returned to Ireland with a shattered constitution.  He then found that the portrait and original had faded together, and corresponded, perhaps, as well as when first painted”.

The Strawberry Girl is one of these melancholy, half-lost paintings.  What an irony that its deterioration has only enhanced the sense of childish fragility and fleeting innocence that make it so arresting! Looking at us from a wall in Hertford House the girl reminds us of Blake’s children in Holy Thursday with “their innocent faces clean” and “raising their innocent hands”.  Unwittingly, and unforgettably, Reynolds has given us a definitive image of the poignant fading of childhood.

POSTSCRIPT
This post was originally published on our blog in 2018.  For subsequent thoughts on the identity of the girl in Reynolds’s picture, see my follow-up post Reynolds Revisited: Who was the Strawberry Girl?