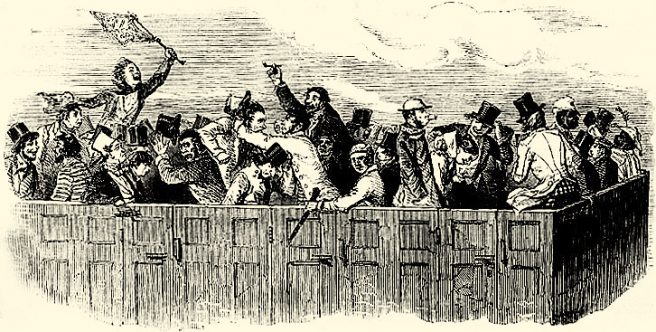 At the heart of this little story is a young woman who is an overlooked Londoner in the strictest sense.  She is in fact so overlooked that nothing is known about her beyond the details that follow.  All incidentals—her name, her age, her occupation—have been lost forever.  But she has not, thanks to a remarkable encounter on a train. 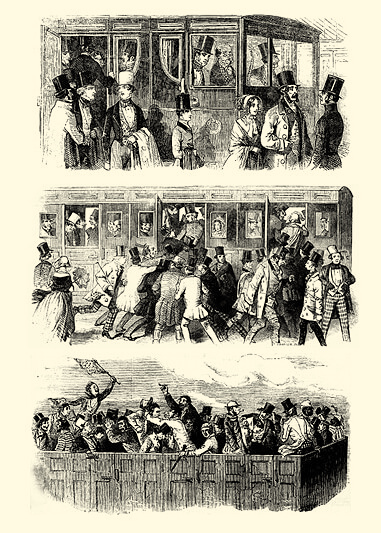 First, second and third class carriages.  Image in The Illustrated London News 22 May 1847.

The date was the 22nd of June in the year 1851.  It was a Sunday morning.  The weather in London was fair, as it had been for the previous few days.  The young woman in question was standing on the “up” platform—“up” to London—of a station on the North Kent line of the South Eastern Railway.  The station cannot be identified, but, for reasons that will become clear later, it must have been after Gravesend.  In fact it might have been Gravesend itself.

She was alone, and she was travelling with a second class ticket, there being in those days three classes of carriage.  However, when the train to London Bridge reached her station, the second and third class carriages were already full.  In order to solve the problem the station-master was telling passengers with the cheaper tickets to get into first class carriages, which, not unnaturally, had room to spare.  We may well recognise the situation, as in certain respects our trains are not much of an improvement on their Victorian predecessors!

Our young traveller must have looked on this arrangement as an unexpected stroke of luck.  She climbed in, along with three or four other passengers, who also held second or third class tickets but had been unable to find room in the appropriate carriages.  In the corner sat a gentleman of respectable appearance. 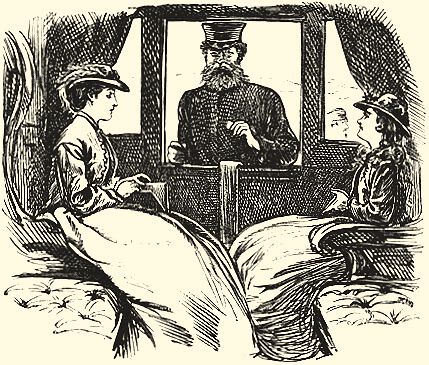 AT LONDON BRIDGE STATION
Comfortable though the first class carriage was, the young woman was anxious.  For she did not have a first class ticket, and, although the problem was not of her making, she might have a hard job convincing a railway official that the solution was not hers either.  Now the penalty for fare-evasion was a swingeing forty shillings—or so says The Illustrated Guide to the South Eastern Railway—in the region of two hundred pounds in today’s money.  So one can understand the young woman’s anxiety when a ticket collector boarded the train at the London Bridge terminus and began making his way among the passengers.  She presented her one-shilling second class ticket.  The collector told her to bring it up to the value of a first class ticket by paying an extra four pence.  She protested that it had not been her fault that she had been unable to travel in a second class carriage, but her words fell on deaf ears.  In the end she gave the collector one shilling, asking him for eight pence in change.  Saying that he would bring her the change, the collector moved on to other passengers.  The young woman asked him for her change more than once as he passed up and down the carriage.  In the end he went off, and did not return. 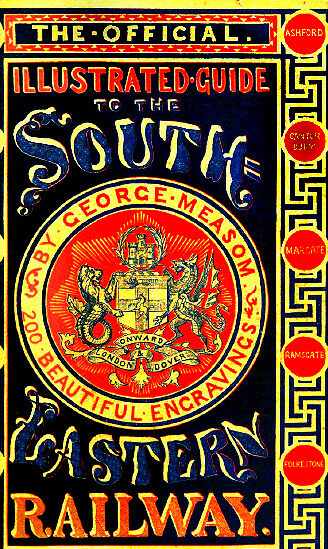 Cover of George Samuel Measom The Official Illustrated Guide to the South Eastern Railway and its Branches (1858).

The train emptied out, and the passengers left the platform, out into the swirl of pedestrians and vehicles in Tooley Street, and from there into the sprawl that was Victorian London.  The young woman alone remained in the station, talking to railway officials in the vain hope of bringing the cynical ticket collector to book.  And there her story would have ended had it not been for the fact that the distinguished looking gentleman who had been sitting in the corner of the carriage, and who just happened to be Charles Dickens, had witnessed the whole performance.

RAILWAY AS THEATRE
We know all about this curious incident because Dickens penned a letter on the morning of the following day—Monday the 23rd of June—in which he recorded it in full detail.  He had been travelling up to London from Gads Hill Place, his country house in Kent.  He had boarded the train at Gravesend at twenty past eight in the morning, in time for the whole sorry drama to unfold before his eyes.  He wrote with the novelist’s acute sense of human character, and the campaigning journalist’s abhorrence of exploitation and injustice, and he condemned the ticket collector’s pocketing of the vulnerable young woman’s shilling as a “very gross misconduct”.

In 1851 Dickens was between David Copperfield and Bleak House.  He was also hard at work on Household Words, and he was on that train from Gravesend precisely to visit the journal’s offices off Waterloo Bridge at 16 Wellington Street North, a distance of some two miles from London Bridge Station, a journey that as a great walker he would no doubt have made on foot.  There he had arranged to meet Daniel Maclise, the renowned Irish painter and illustrator, at half-past one in the afternoon. 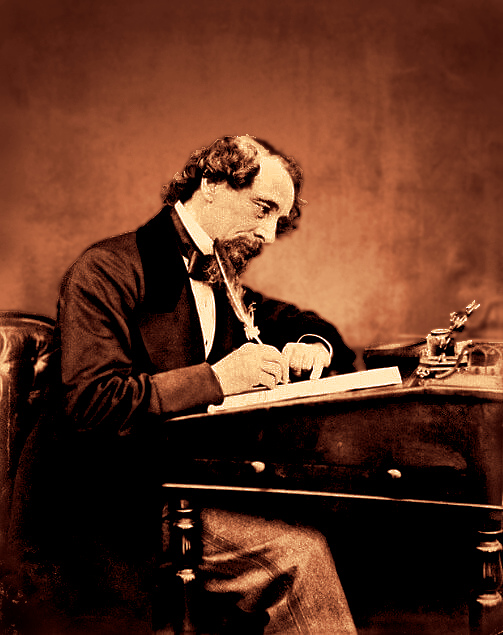 Railways occupied an important place in the inner life of the great writer.  His interest verged on the obsessive, even if, like us, he loathed certain aspects of the whole business, such as the profiteering company directors, and nasty refreshment rooms.  But he was also moved by the romance of travel, and a year before the incident on the North Kent line, he had written in a letter to his friend John Forster that the railways were “always a wonderfully suggestive place”.  Is it too fanciful to suppose that a railway carriage, for Dickens, was a theatre of sorts?  It was a confined but furnished space, like a stage.  It had doors through which the actors—passengers and officials—came and went.  Hopes, fears, secret sorrows lay concealed beneath a public manner determined by a sense of decorum.  Dickens sat, as in a theatre, watching silently.  And, as in a theatre, though stirred by what he saw, he felt unable to intervene.

And, to be sure, Dickens did not intervene, even though the shifty manner of the ticket collector had convinced him that “he had not the least intention” of bringing the young woman her eight pence change.  From beginning to end of the matter the writer said not a word to his fellow passenger.  They remained perfect strangers.

A CHAMPION OF SORTS
What Dickens did do, though, was complain.  He found the stationmaster at London Bridge, who was busy with the arrival of the “Paris train”—the train from Folkestone that connected with the steam-packet from Boulogne.  He introduced himself as a friend of James Macregor, the Chairman of the South Eastern Railway, who might have been known to him through a mutual acquaintance, the philanthropist Angela Burdett-Coutts.  The stationmaster “behaved with the utmost civility and propriety”, Dickens remembered, and he “paid every attention to” the complaint brought before him by the distinguished author.  One wonders if he felt he had any choice.

Dickens left his card with the courteous stationmaster, who must have been astonished when he read the name on it, and went on his way.  The next morning, sitting in the offices in Wellington Street North, he wrote his letter, addressing it to George Sowerby Herbert, the Secretary to the South Eastern Railway.  If he ever received a reply, it has not survived. 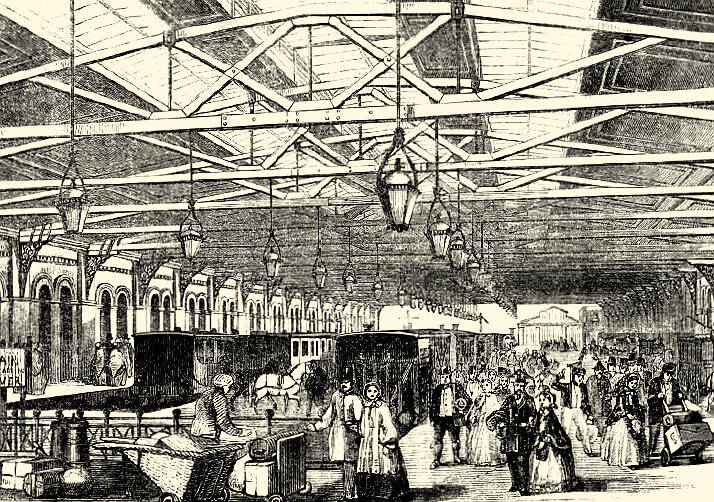 The terminus at London Bridge Station in 1858.  George Samuel Measom The Official Illustrated Guide to the South Eastern Railway and its Branches (1858) page 6.

A FINAL THOUGHT
In 1858 The Illustrated London News published an article on London Bridge Station that we would probably now recognise as an exercise in slice-of-life journalism.  In it the interesting point is made that all travellers on the railways are in a sense equal:

They are all fastened to the tail of the same engine, carried at the same rate, delivered in the same minute at the terminal station, and subject to the same perils if any accident should happen.  Among the democratic agencies of the train, the railway is, after all, the most potent leveller.  It reduces all ups and downs, all questions of higher and lower, to something like a dead flat.  At most it is a mere matter of  gradients, practically and socially; the lofty are brought down, and the lowly elevated; and, if some eminence should prove insurmountable, the difficulty is cut through by a tunnel.

If Dickens read this article, he might have appreciated the irony.

Cornelius Ahern, or, the Not-So-Artful Dodger