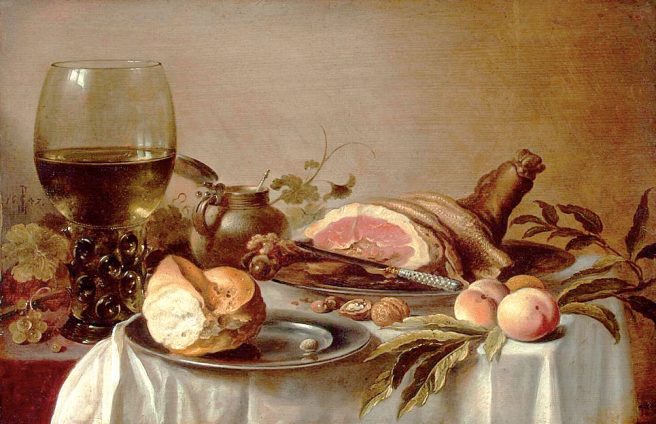 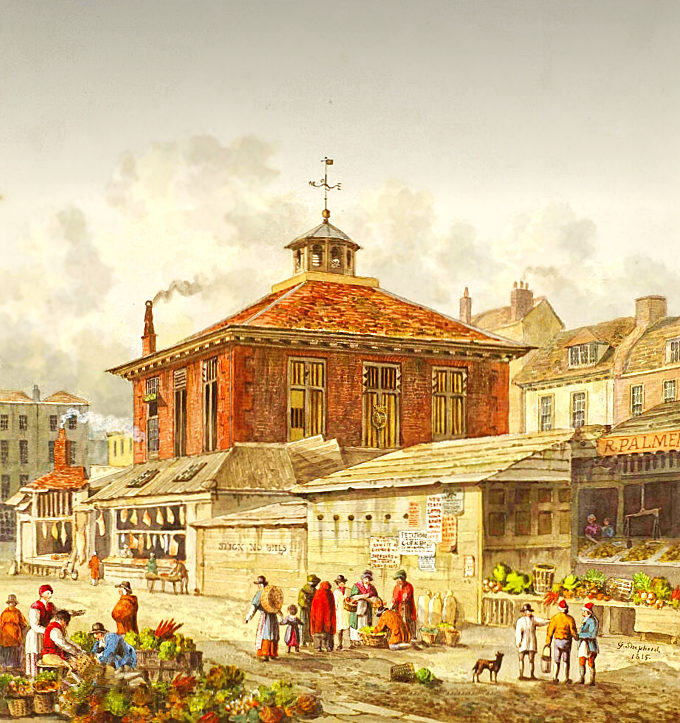 A view of Clare market in 1815.  Watercolour by George Shepherd.  © London Picture Archive

There is a good story about a gentleman who lived in Stanhope Street at the end of the eighteenth century.  The details first saw the light of day as an item in the Daily Advertiser in 1798.  After that it appeared in anthologies of one kind or another, a happy consequence of which was that it avoided settling permanently in some dark corner of the past.

The story has two problems associated with it, which you may or may not consider serious.  The first is that at the time in which it is set there were two Stanhope Streets.  One was off Park Lane, while the other ran alongside Drury Lane through Clare Market.  However, given that the gentleman concerned was clearly blessed with considerable means, I am inclined to think that the events that I am about to relate occurred in Mayfair rather than in one of London’s less salubrious neighbourhoods.

The other problem is that the gentleman of Stanhope Street had no name, or, at least, no name that has come down to us.  We only know that his initials were W. R., and W. R. is how he will be referred to from this point on.  (Click here for another story about a man known to us only by his initials.) 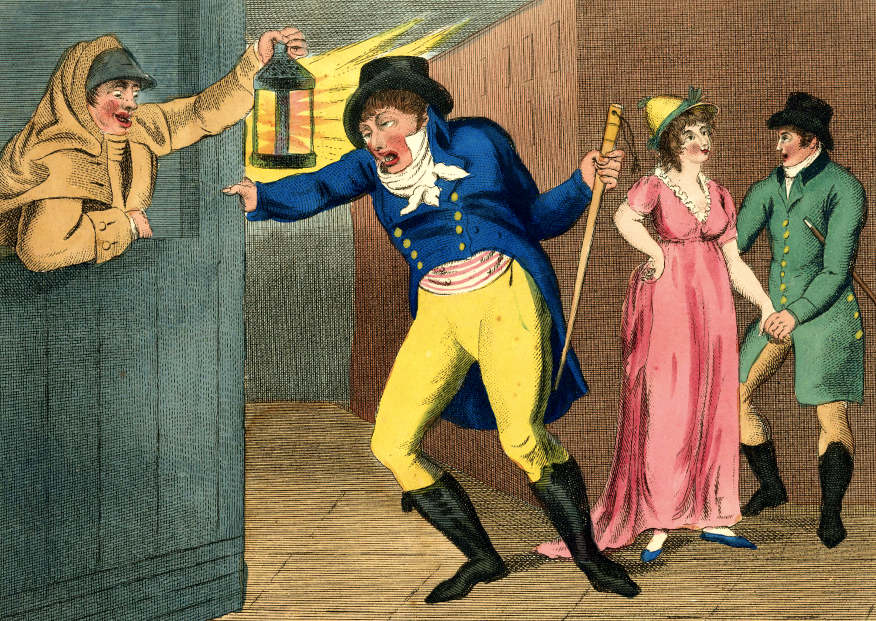 A Three Bottle Buck with subtitle The Way to Stanhope Street.  Hand-coloured etching published by Laurie & Whittle in 1803.

SPANISH CHARLES
Not that the other Stanhope Street―Stanhope Street in Clare Market―is devoid of interest.  For example, the original pantomime clown, Joseph “Joe” Grimaldi, was born there in 1778, and a satirical print dated 1803, with the racy title A Three Bottle Buck, suggests that its denizens were not unfamiliar with the pleasures of the flesh.  Then again, a grim newspaper report about a disgraced army officer, who in 1797 cut his own throat and stabbed himself nineteen times, and survived, makes one wonder if these pleasures were in some cases pursued rather too enthusiastically. 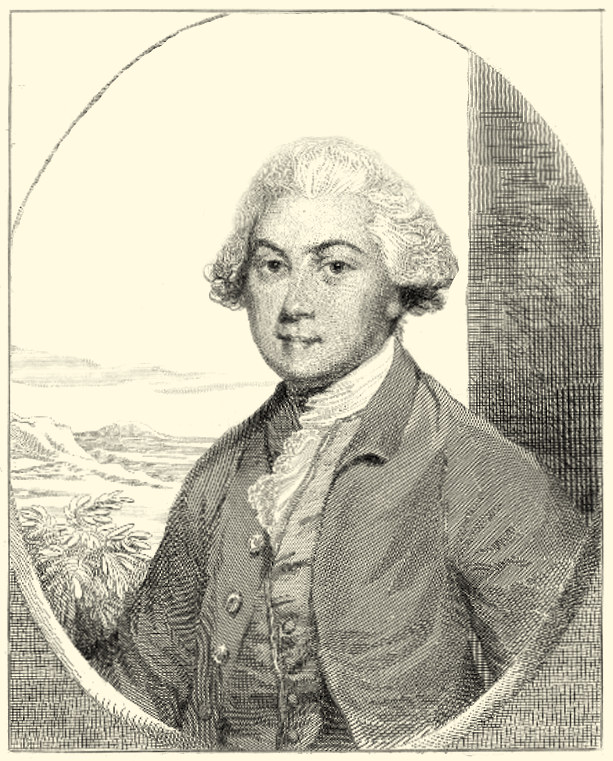 Other illustrious residents are worth mentioning, even if they postdate the story I am about to tell.  The Duke of Manchester and the Earls of Jersey and Lanesborough had homes there.  Isaac Barré, an Irish soldier who had served with Wolfe at Quebec before pursuing a career in politics, died there in 1802 in the house in which Robert Peel would one day live, and in which the William Peel who would go on to win the Victoria Cross for his brave actions at Sevastopol would one day be born.  Other distinguished soldiers who resided at some point in Stanhope Street were FitzRoy Somerset and Henry Hardinge, both of whom saw action in the Peninsular and in the Crimea.  Add to the name of Peel those of two more prime ministers―Canning and Palmerston―and Stanhope Street begins to look like a sort of Establishment enclave.

LOOK WHAT WE HAVE FOUND!
Well, one Monday in 1798 the house in Stanhope Street belonging to W. R., whose identity must remain ever a mystery, was burgled.  The burglary took place at night.  And the burglars were either very audacious or very hungry, or both, because they helped themselves not only to items of some value but also to two roast chickens, which they must have come across in the kitchen or on a sideboard in the dining-room.  Furthermore, they washed down their meal with ale drunk from a tankard, and then by way of a digestif they disposed of three bottles of old Madeira. 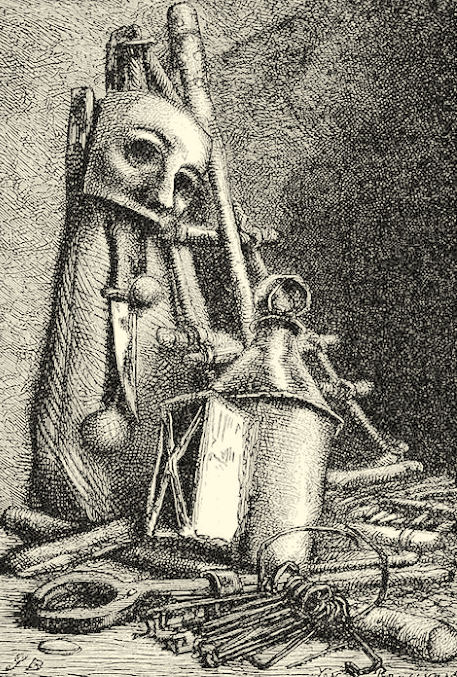 Tools of the trade.  Wood engraving depicting the burglar’s equipment by Gustave Brion.

Among the items they stole was the tankard.  Then, rifling through a chest of drawers, they found some tablespoons, and these too they pilfered.  They then went on to look inside an old red morocco pocketbook, which was lying in the same drawer, and in it they found some “light” guineas.  These too they snaffled.  And an old watch, there in the drawer as well, was added to the loot.

(And what exactly are light guineas?  They are simply guineas that are below their legal weight, that is to say, containing less than a quarter of an ounce of gold.  The process of lightening might have two causes.  Wear and tear―the gradual loss of the soft metal as a natural consequence of the overuse of a coin―was one.  Criminal clipping was another.)

Slipping out of the house, the burglars made good their escape, leaving W. R. to deal with the aftermath of their nocturnal activity in his own good time.  And in his own way, for when W. R. did indeed realise that he had been burgled, his reaction was not what one might have expected.

BE MY GUEST!
To all intents and purposes W. R. simply shrugged his shoulders.  His food had been eaten, and his drink had been drunk, and that was an end of it.  His tankard had been stolen, but it was not a remarkable tankard, and he told himself that his visitors were heartily welcome to it.  He had no great attachment to the tablespoons, and the villains were welcome to these too.  And the guineas in the old red morocco pocketbook were, well, light guineas, and he did not consider them to be so great a loss.  But he was sad about the watch, which was a family heirloom, and he was very upset over the loss of the pocketbook. 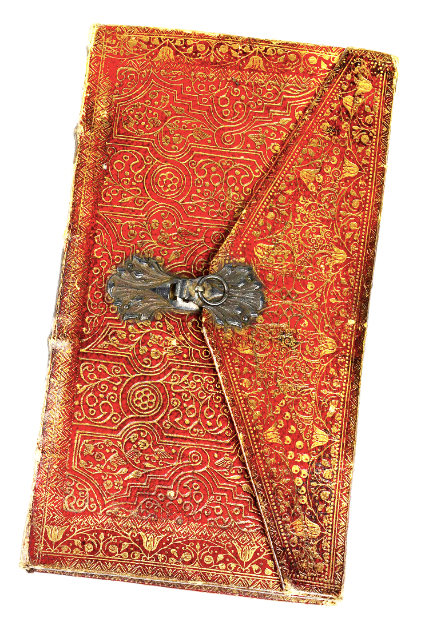 A pocketbook bound in red Morocco.  Dated to the late seventeenth or early eighteenth century.

For in the pocketbook he had written down notes of one sort or another, and filed away this and that loose item, and these, although valueless in themselves, were important to him.  And it was in grieving over this particular loss that W. R. made an extraordinary decision.  The other articles, which could be replaced, he would let go.  But he would ask the burglars to give his pocketbook back.

And so he paid to have an announcement published in a newspaper―the Daily Advertiser, as mentioned earlier―and he then sat back to await developments.  The announcement was laced with an ironic politeness that seemed to suggest that the burglars, who had after all dined well at his expense, were recipients of his hospitality.  He invited them to keep the silverware and the illegal coins.  He accepted that the watch was gone forever­―straight to the burglars’ fence, one imagines―and hoped only that he might one day be able to purchase a similar timepiece to replace it.  However, the contents of the pocketbook

can be of no use to his kind and friendly Visitors, but are important to him: he therefore hopes and trusts they will be so polite as to take some opportunity of returning them.

And that, one might be forgiven for thinking, was that.  Only it was not. 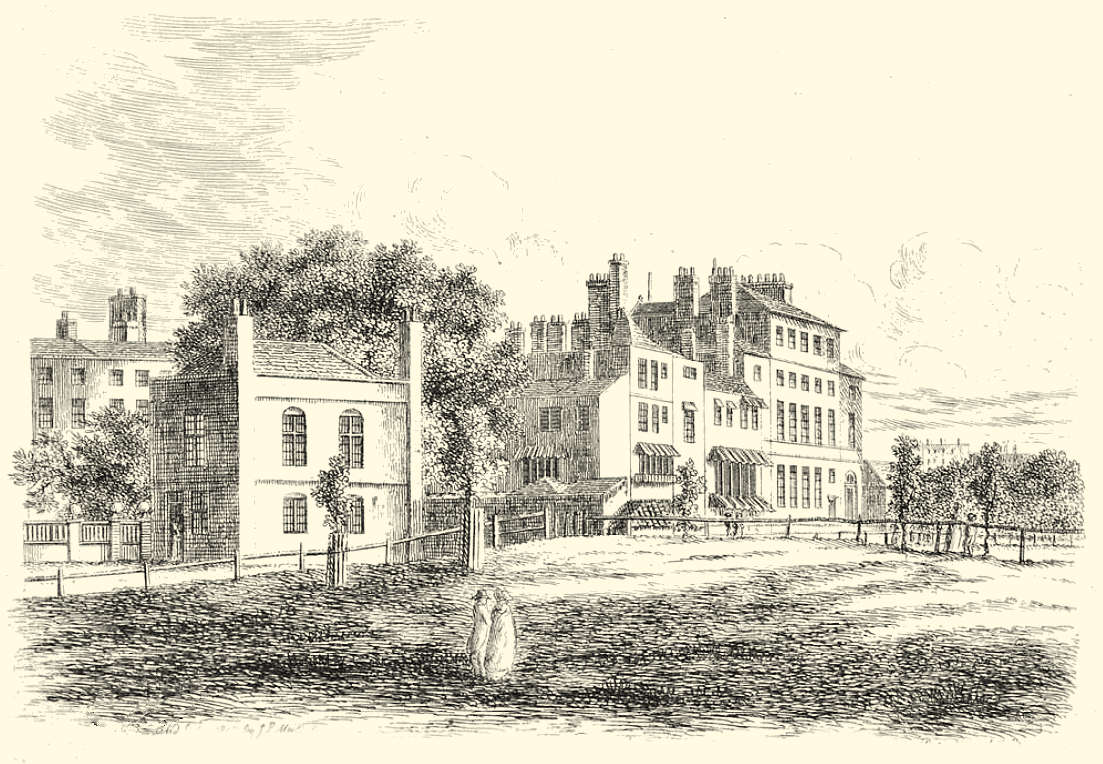 QUITE A GEMMAN
A few nights later something thudded down into the area of W. R.’s Stanhope Street residence.  A packet had been dropped down from the street above.  Attached to the packet was a letter.  When opened the packet was found to contain the old red morocco pocketbook.

But more extraordinary even than the remorse shown by the burglars was the letter they wrote to W. R.  Echoing the notice that had appeared in the Daily Advertiser, it was a marvel of courtesy and tact.  W. R. was addressed as “quite a gemman”.  The signature was again no more than initials―“A. B. & C.”―a delightfully improbable ascent through the first three letters of the alphabet.  So do we conclude that there were three burglars involved in the crime?  This seems likely.  Possibly, though, there were only two, A. B. and his accomplice C. 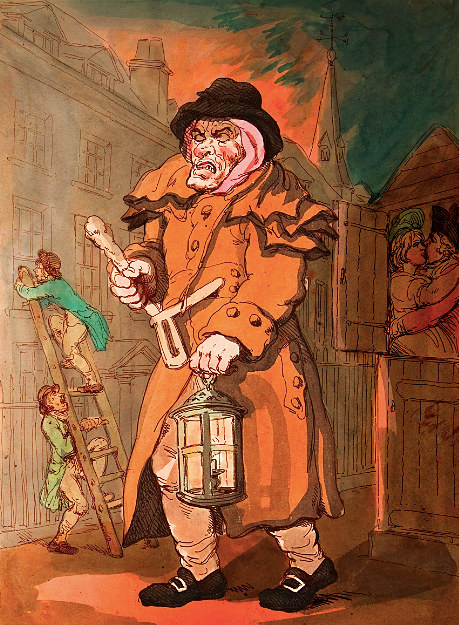 The watchman in this scene by Thomas Rowlandson seems oblivious to the burglary unfolding behind him.  Hand-coloured etching dated 1800.

In the body of the letter the burglars were at pains to explain the events of that night.  They had pinched―“cribbed”―his pocketbook because W. R.’s wine had gone to their head―“got into our upper works”―where no doubt it had clouded their judgement.  They had enjoyed the ale―it “was mortal good”―but they had sad news of the tankard.  Along with the tablespoons it had been melted down into what they described as a white soup, which was presumably not the veal broth Bingley refers to in Pride and Prejudice, but a silvery dollop of molten metal.  With curious precision A., B. & C. informed W. R. that the operation had taken place two hours before daybreak down in Chelsea in Duke’s Place.

But the “soup” was not the only humorous reference to the burglar’s meal, for the casing of the old family watch had been reduced to a “brown gravy” of molten gold or brass.  The watch itself―charmingly described as “the guts”―was on its way to Holland.  (Holland must have been a good place to dispose of stolen watches in the late 1790s.)  In a curious combination of images the watch was “new christened”, so it was no longer traceable to its rightful owner, and “transported”, which may well say something about the anxieties of the eighteenth-century criminal.

The sentimental value of a family heirloom may well have induced in A., B. & C. a slight remorse.  In their letter they assured W. R. that they would have returned it, with his papers, had it not been half-way across the North Sea.  But they were quick to point out that, as it had been rechristened, it was no longer really a family heirloom. 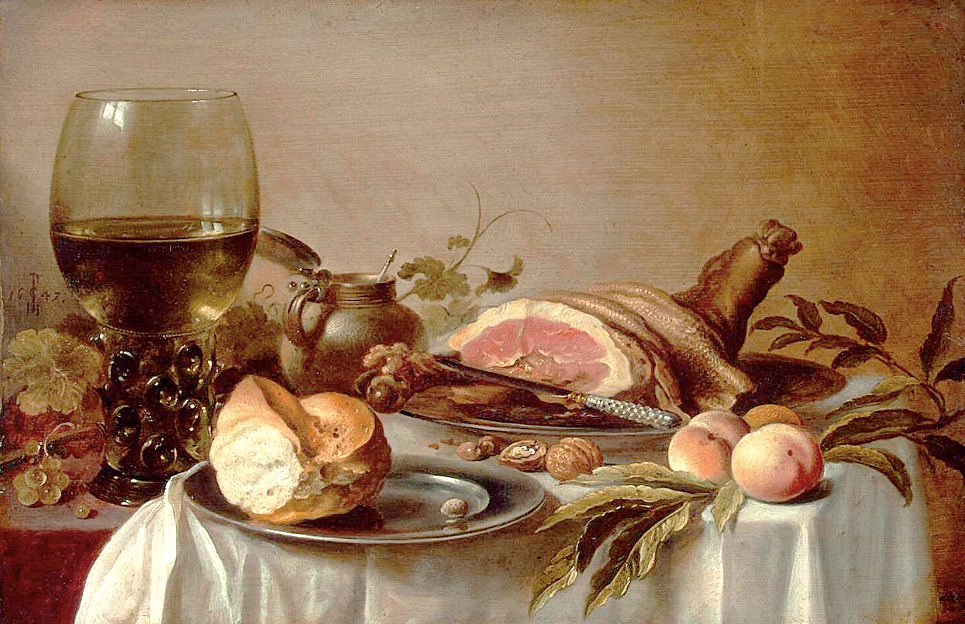 Still life with food and drink by Pieter Claesz dated 1647.

YOUR HUMBLE SARVANTS
And so ends our story.  W. R. got back what was most precious to him, and learnt a useful lesson about human nature.  And A., B. & C. had established an odd sort of relationship with the victim of their burglary based on a shared belief in the importance of good manners.  They ended their letter as follows:

And soe, sir, we have nothing more to say, but that we are much obligated to you, and shall be glad to sarve and visit you, by nite or by day, and are your humble sarvants to command.

Read it as you will.  The burglars were either courting W. R. or winding him up.  After all, the prospect of another “nite visit” could not have been especially enticing.

Missing Mother, or, A Chapter in a Coffee House History