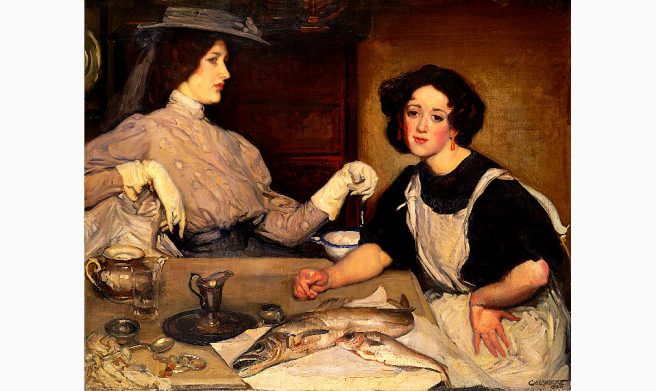 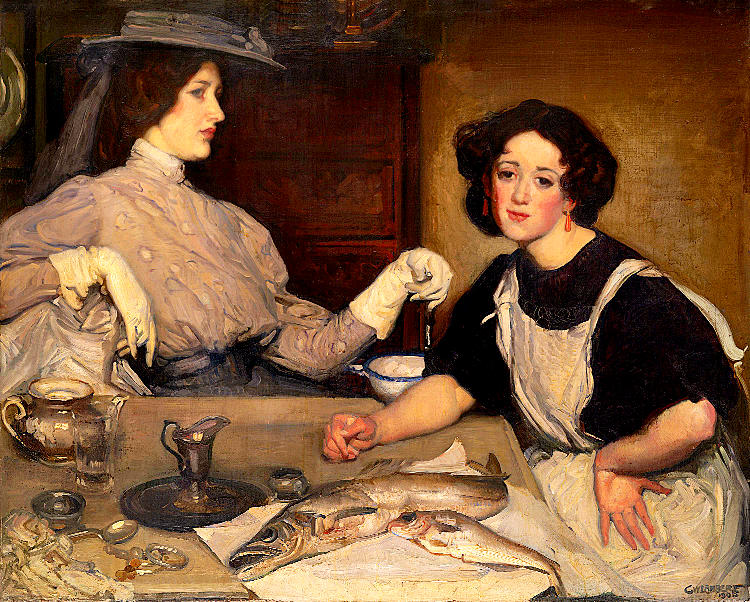 This story starts with a painting called Lotty and a Lady in the National Gallery of Victoria in Melbourne.  It was painted in London in 1906 by the Australian artist George Washington Lambert, and it depicts two women—a servant and an elegantly dressed “lady”— sitting in a kitchen.  Initially I assumed that the same woman had modelled for both figures—they share luxuriant dark hair, strong eyebrows and luminous skin—but a little digging has revealed that this is not the case.  The “lady” was modelled by Thea Proctor, an Australian artist and teacher whose life and work are well-documented.  However, the model for “Lotty” the maid is identified as a woman by the name of Lottie Stafford, who usually merits no more description than that she was a cockney washerwoman from a Chelsea slum.

Most nineteenth-century working-class Londoners disappear, and leave little trace of their lives unless they were exceptionally talented, or were the perpetrators or victims of crime.  So it is significant that the occasional working-class model achieved fame of a sort as the lover or the muse and sometimes even the wife of a famous artist.  And yet, whilst their physical appearance is recorded for posterity, many professional models remain unidentified, not featured by name in the title of works of art, and rarely mentioned in letters and diaries, and then often just by their first names.  Lottie Stafford is not quite one of this anonymous legion: she is mentioned in titles, and snippets of information about her are available in books and catalogues and on the internet.  What follows is an attempt to piece together the life, family and milieu of this working-class London woman. 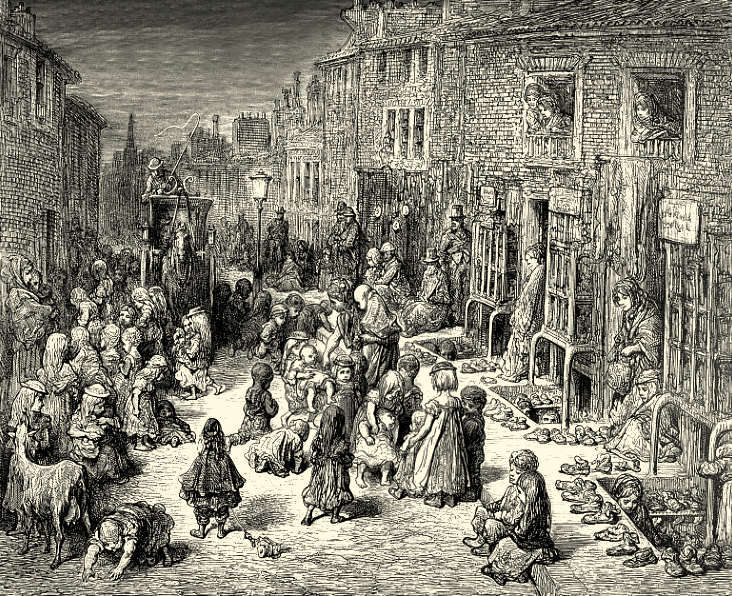 View of Dudley Street in Seven Dials, which no doubt bore more than passing resemblance to Paradise Walk.  Image by Gustave Doré in Blanchard Jerrold London: A Pilgrimage (1872) between pages 158 and 159.

To start, let us consider the oft-repeated known “facts” about Lottie.  Firstly, it is said that she lived in a slum, which is certainly true, as her home from 1901 until about 1935 was Paradise Walk in Chelsea.  The second edition of Charles Booth’s The Map Descriptive of London Poverty 1898-1899 shows Paradise Walk as one of the few streets in Chelsea marked in black and designated as housing people who were the “lowest class, vicious and semi-criminal”.  But the descriptions we have of the street come from the pens of middle-class reformers and authors, while the voices of the inhabitants are silent.  In Part 2 of the story we will look at these attitudes, and also at the realities that can be gleaned from the 1901 and 1911 censuses.

Next, Lottie is always described as a washerwoman, which may well have been her occupation, as it was common amongst the female population of Paradise Walk.  It should be pointed out that none of the public records list what she did for a living, although this is not unusual for women’s work.  In Part 3 we will consider the work for which Lottie should be remembered—an artist’s model—and we will describe her later life. 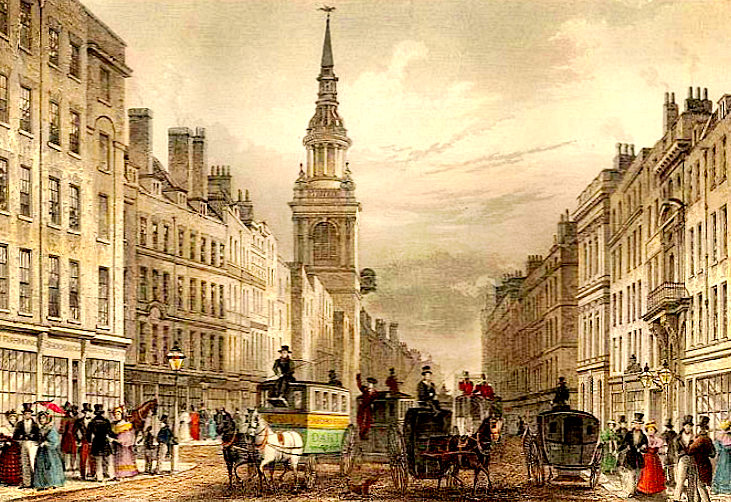 View of Cheapside with the church of St Mary-le-Bow in the background.  The “great bells of Bow” in the well-known nursery rhyme are here, and not in East London, as is sometimes thought.  Image by Thomas Hosmer Shepherd dated 1837.

Finally, Lottie is usually called a cockney.  The label is not entirely accurate, as Lottie was not born within the sound of the church bells of St Mary-le-Bow on Cheapside in the City of London.  She was in fact born and bred in Chelsea, and it was in Chelsea that she lived and died.  But the term “cockney” is also used to describe the dialect of London’s labouring class, and it is likely that Lottie spoke with the corresponding accent.

BEING CHARLOTTE
Lottie’s parents were both born in Chelsea, but her grandparents had migrated to the capital from Huntingdonshire and Somerset—the Macrows—and Essex and Surrey—the Scotts.  Lottie’s father, Walter Charles Macrow, was born at 3 Sidney Place on the south side of the King’s Road in 1856, and baptised at the Marlborough Road Wesleyan Methodist Free Church.  His father, the splendidly named Thomas Christmas Macrow, was a grocer, tea dealer and cheesemonger. 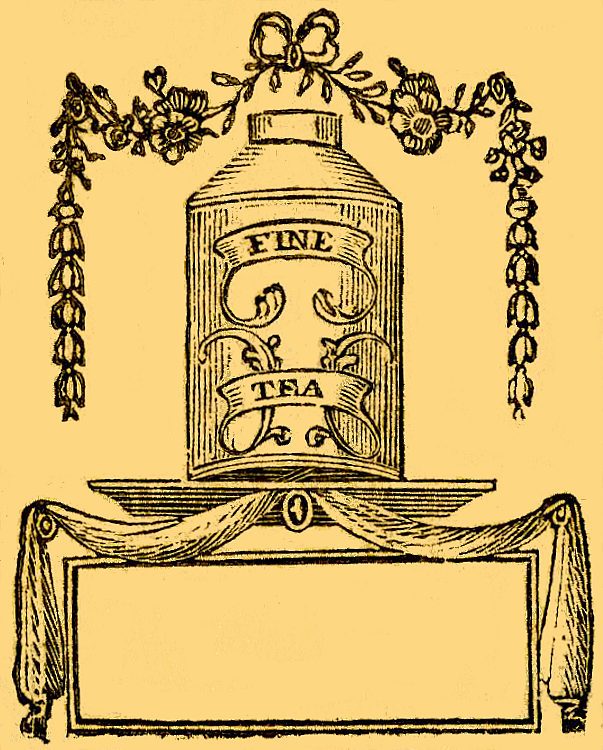 The Macrows moved frequently, and at the time of the 1861 census they were installed at 10 and 11 Marlborough Road, which is now Draycott Avenue.  The parents, four children and a fourteen-year-old maid of all work lived not far from the Works of the celebrated sanitary engineer Thomas Crapper.  But Macrow was not lucky in his business career: he was declared bankrupt on at least three occasions, and he suffered a fire in his premises, which fortunately he had had the foresight to insure.  Interestingly, there were at least two other reported accidental fires in the insured premises of tea dealers called Macrow during this period.  If the Macrows in question were Thomas, he was either very unlucky, or was he dishonestly trying to exploit the insurance system.

Walter did not follow his father into the retail trade or into his later career as an auctioneer.  Instead he became a painter and decorator of the type known as a grainer—he specialised in painting imitation wood.  The chances are that he had been working for at least a decade when on the 4th of June 1882 he married Annie Susannah Scott.  He was twenty-six, she was twenty, and the wedding took place at St John’s Church in Tadema Street at the World’s End.  Annie was the daughter of a labourer father and an ironer mother, and she made ironing her own job as well.

After the wedding the young couple set up home with four-year-old daughter Florence, Annie’s daughter from a previous relationship.  Then on Saturday the 7th of April 1883 their first child, Charlotte, was born.  In the records this child is known as Charlotte Annie Macrow—named after her grandmothers—but she seems to have been baptised Charlotte Harriet at St Paul’s Church in Onslow Square in 1887. 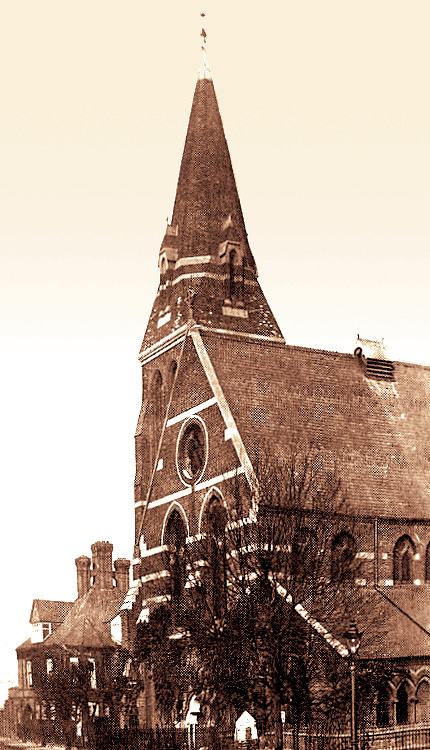 St John’s Church in Tadema Street.  Image in A History of the County of Middlesex volume 12 Chelsea (2004).

Little is known about Lottie’s childhood.  However, we can be sure that Walter and Annie Macrow lived at various addresses in Chelsea, including Milman’s Street near Battersea Bridge, which Booth classified as very poor, and Regents Place on Leader Street.  We can also be confident that she would have attended elementary school, because in 1880 education was made compulsory for children up to the age of ten, this upper limit being extended to eleven in 1893.  The main areas of study were the three Rs—reading, writing and ’rithmetic—plus needlework for girls.  On leaving school Lottie would have been expected to earn a living in order to contribute to the family income.

IN PARADISE
Lottie’s Chelsea was not the expensive and exclusive area it is today, nor was it the semi-rural riverside village it had been within the living memory of her parents.  There was a significant population of labouring people, with an influx of the middle-classes that brought with it the artists and writers who lived in the recently built large brick houses.  Those attracted to this affordable area with its bohemian edge included the painters James McNeill Whistler, John Singer Sargent, Robert Brough and George Percy Jacomb-Hood.  The writers Oscar Wilde and Arthur Ransome, and others, also lived there.

At some point before 1901 Lottie met a young man called John Christopher Stafford.  At five feet ten inches—almost five inches above the average height for men—John was certainly noticeable.  He worked as a carman or delivery driver, which probably meant that he drove a horse-drawn van, even though there were motor vehicles on the roads by this time.  His family—his parents and their five children—had lived in Paradise Walk since at least 1881. 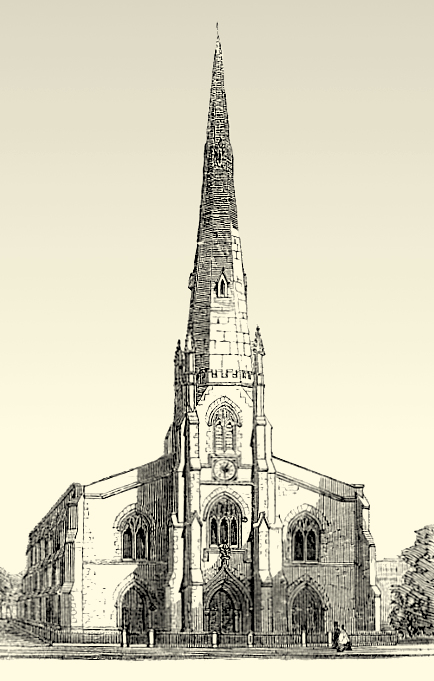 The young people married in Christ Church in Chelsea on Sunday the 7th April 1901, which was not only Easter Sunday but Lottie’s nineteenth birthday as well, and was followed by a Bank Holiday, as it is now.  Whether Lottie’s parents had reservations about the daughter of a semi-skilled tradesman taking up with a boy from Chelsea’s most notorious slum is not known.  But Annie Macrow, who was the mother of an illegitimate child, may have been relieved to see her daughter safely married, as only five weeks later Lottie gave birth to her first child, Elizabeth Charlotte.

It is likely that the young couple initially lived in Paradise Walk with John’s family, that is to say his widowed father, who was a scaffolder’s labourer, his brothers Charles and Thomas, who were factory labourers, and his sister Elizabeth, who was listed as having no occupation, suggesting that she may have kept house.  But we will leave the newly enlarged Stafford family for the time being.  Instead we will look at attitudes to Paradise Walk in literature, and at what the census can tell us about the people who lived there … TO BE CONTINUED.

Anonymous Letters from an Artist’s Model

The March of Time, or, A Portrait of Sergeant Drummer Henry Gribble

The Quality of Light, or, The Art of Karl Heffner