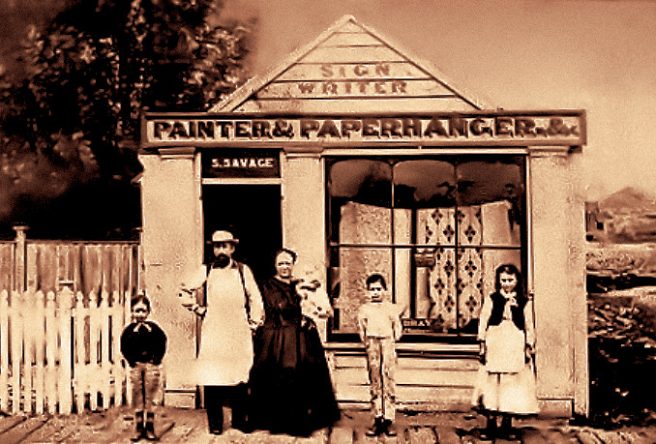 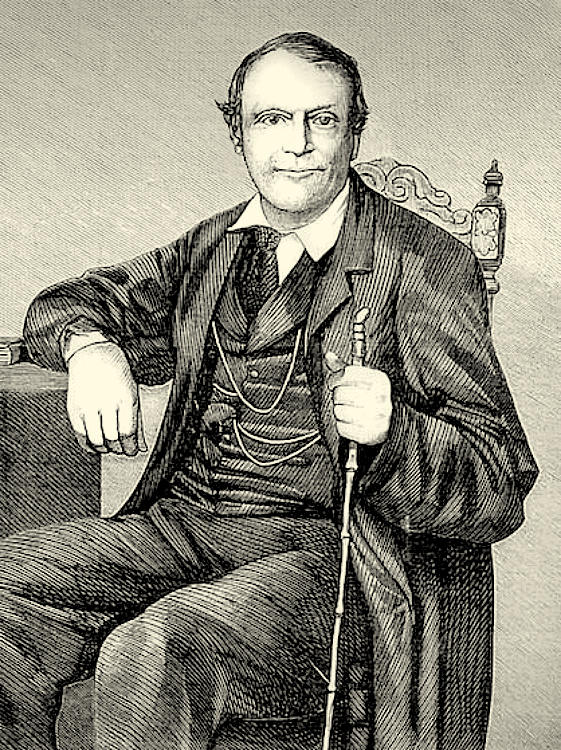 A portrait of David von Joel published shortly after his death.  Image in The Illustrated Sporting News 9 September 1865.

Regular readers of London Overlooked will recall our tribute to the “German siffleur”, the remarkable whistler who entertained certain quarters of nineteenth-century London with his imitations of birds and animals.  He was of, course, the celebrated David von Joel.  And it will be remembered that London could not quite decide what to make of him.  The reviews that he received were on the whole complimentary—affectionate even—although a note of mockery could often be heard.

As a footnote to that little history, we offer the following.  This time, though, Herr von Joel plays only a minor role, for the principal character is a child of his.  She was Frances or Fanny, and she had been born in 1841, when von Joel and his wife Rachel were living in Lisle Street in Soho.  And her young life was turned upside down by a fellow by the name of John Francis Watkins.

JOHN FRANCIS WATKINS
Watkins was born in about 1836.  We have no idea where he lived as a boy, but we do know that his father was another John Francis Watkins, and a wallpaper hanger.  In fact father and son were alike in more than just name, for the younger John Francis was also a wallpaper hanger, although later, from at least his early twenties, he worked as a painter.  What really matters, though, is that in 1859 young Watkins married an attractive girl by the name of Matilda Williams, who at the time was eighteen or nineteen years old.

Matilda lived south of the river, just off Blackfriars Road in Southwark.  Her father, George, who hailed from Brading on the Isle of Wight, and who at the time of Matilda’s marriage was in his early fifties, was a manufacturer of stays.  His wife Charlotte, who was a few months his senior, came from Teignmouth in Devon, and was a bonnet maker.  Matilda had two brothers and two sisters, and she was the second youngest of the five children.  She was all set to produce the next generation of the Williams family.

Early in June Matilda was married at the church of St Mary-at-Lambeth under the watchful eye of her father.  He was one of the witnesses, and no doubt he would have been sizing up the young wallpaper hanger, who was slight of build and sallow of complexion.  Whatever George Williams made of John Francis Watkins, he could not have had the first notion of what awaited his daughter in the weeks and months ahead.

A Victorian wallpaper hanger standing outside his workshop with his wife and children.  Alas, he is not John Francis Watkins, as the name on the door testifies.

MATILDA WATKINS
Watkins was then living in Robert Street in Stockwell.  His fellow residents were artisans and tradesmen, and the entries in the 1860 Post Office directory include a tinplate worker, a basket maker, a plumber, a tailor, a brace of carpenters and another of boot makers.  A wallpaper hanger would not have been an alien figure in this solidly working-class neighbourhood.  When Watkins went out to work, dressed in overalls, and armed with paste bucket and brushes, he would not have stuck out in any way.  But in the privacy of his own home he was a brute with an uncontrollable temper.

Whether he flew into rages under provocation, or simply because he had a mean streak, is not clear.  But the marriage was still in its infancy when Watkins began to threaten Matilda with violence.  More specifically, he would threaten to cut her throat.  And on one occasion he almost did.  Such at least was the claim made by George Williams, who, happening to drop in on his daughter and son-in-law, found Watkins brandishing a razor, with his arm raised ready to strike, and swearing like a trooper.  George darted forward and snatched the razor before Watkins could carry out his deadly intention. 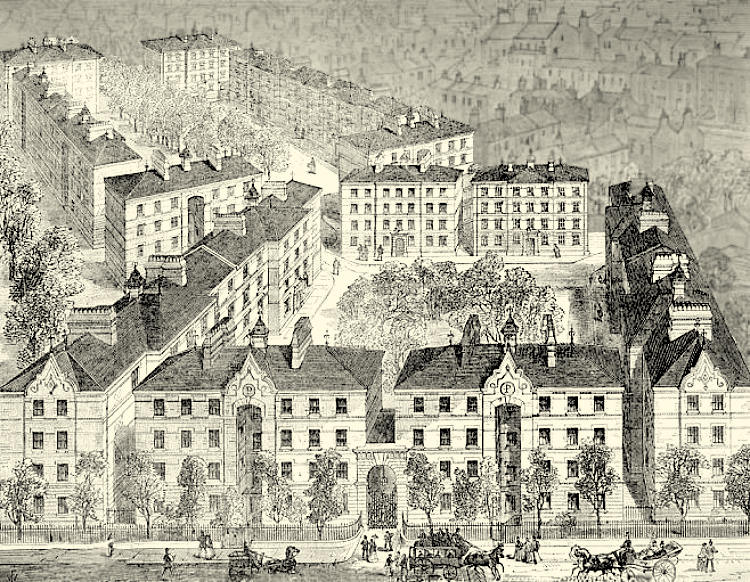 George took Matilda back home, where, reunited with her family, the traumatised girl picked up the pieces of her life.  She followed her father into the world of stays and corsets, although in due course she found employment as a machinist in a factory.  She stayed in Southwark, moving at some point in the 1880s with her parents into a Peabody Trust estate, and dying in June 1918 at the age of seventy-seven.  We can trace her long life in the census returns, where she is variously Matilda Watkins or Matilda Williams, as if she was unable to decide if she had ever been married at all.

FANNY WATKINS
But married she was and married she remained.  For Watkins, in spite of seeing Matilda wrested from him by her father, did not divorce her.  What he did do was to move up to Marylebone, where in 1862 he bigamously married Fanny von Joel, daughter of the celebrated siffleur.  She had just turned twenty-one: he was about five years older.  How they met we will probably never know.

Theirs was certainly a fruitful marriage.  Between 1863 and 1868 Fanny gave birth to two sons and two daughters, and it is a curious fact that each child was born at a different address.  No doubt a wallpaper hanger earned very little, and the growing family was forever on the move, going from one mean dwelling to another.  What is more, as a bigamist, Watkins was probably looking over his shoulder all the time.  He might have hoped that changing address frequently would keep him out of the clutches of Matilda’s father.

Application for copyright of photograph of David von Joel in the National Archives in Kew.  Sadly the photograph itself has not survived.  © William Ellis-Rees 2019

FAREWELL HERR VON JOEL
While all this was going on, David von Joel died.  As we saw in our earlier piece on the siffleur, his death did not go unnoticed, and the smoke-filled world of the edgier London venues where he had strutted his stuff paid their respects.  A magnificent drawing of the old whistler was published in The Illustrated Sporting News.  He was also photographed in the year of his death—1865—along with the walking-stick that he was renowned for “playing” like a flute.  The photographer, one William Isaac Spicer of 47 Baker Street, must have thought that the picture would earn him a bob or two, as he registered it at the Stationers’ Company for the purposes of copyright.  The application finally came to rest in the National Archives in Kew, where it sits to this day in a rather unprepossessing brown cardboard box.  Sadly the photograph itself has not survived.

Von Joel died three years into his daughter’s marriage.  He may or may not have seen the writing on the wall, but at least he did not have to witness at first hand the painful disintegration of Fanny’s life with Watkins.  By all accounts he was cruelly abusive to her, as of course he had been to Matilda.  And although we do not know exactly what form his abuse took—which may be just as well—we do have the full details of his final and most callous act of unkindness.

For in the summer of 1868, when Fanny was being delivered of her fourth child—a boy by the name of Joseph Edward—Watkins deserted her.  In desperation she threw herself on the mercy of the parish.  There is no evidence that she ever actually entered the workhouse, which was off the Marylebone Road in Northumberland Street, but she must have applied to the guardians for relief.  Outraged at the behaviour of Watkins—a bigamist and a rat—the guardians circulated a notice offering a reward of two pounds for information leading to his arrest.

By a remarkable twist of fate, the notice, which presumably had the name of John Francis Watkins blazoned on it, came to the attention of none other than George Williams.  Quite how a man living in Southwark saw a placard in Marylebone is not clear, but see it he most certainly did, and in due course the wretched Watkins found himself in the Marylebone Police Court, charged with bigamy. 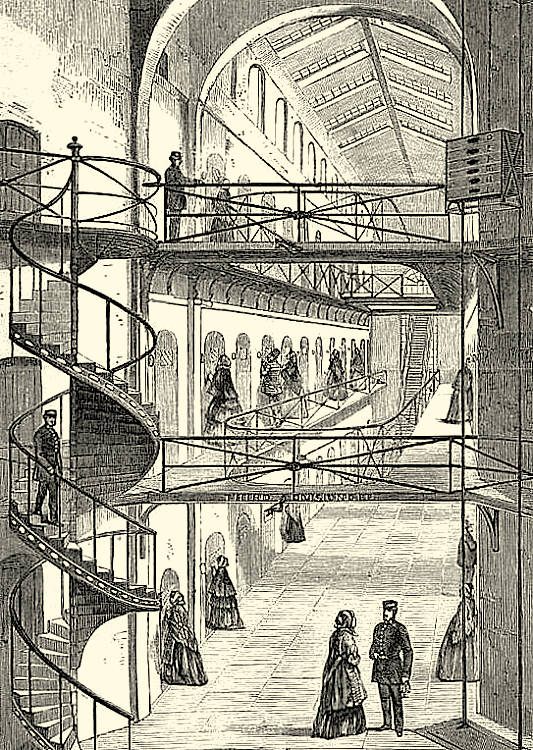 Interior of the House of Correction in Clerkenwell.  Image in Henry Mayhew and John Binny The Criminal Prisons of London volume 3 (1862) page 434.

The case was tried on the 1st of March 1869 at the Old Bailey.  Watkins pleaded guilty, and was sentenced to eighteen months’ imprisonment, the sentence to be served at the House of Correction in Clerkenwell.

AND FINALLY
Fanny’s plight as a penniless mother of four children had not gone unobserved, and at the time of Watkins’s arrest the Marylebone magistrate had offered her two pounds to see her through the difficult times ahead.  When Joseph Edward was baptised, she was a “single woman” living in Brown Street, near the Edgware Road.  Almost a year had passed since the the boy’s birth, and his father was in prison, utterly disgraced.  In the register Fanny had asked for her surname, and Joseph Edward’s, to be entered not as “Watkins” but as “von Joel”.

But in the eyes of the law she was still married—as indeed was Matilda—and in all subsequent documents she was “Watkins” once again.  She had two further children, a girl in 1873, and a boy in 1875 who died in infancy.  When the girl was baptised, John was named as her father.  He would have been out of prison by then, and one wonders if Fanny had taken him back.  And if so, why?

Keeping it in the Family: The Infamous and Bigamous John Blair Wills