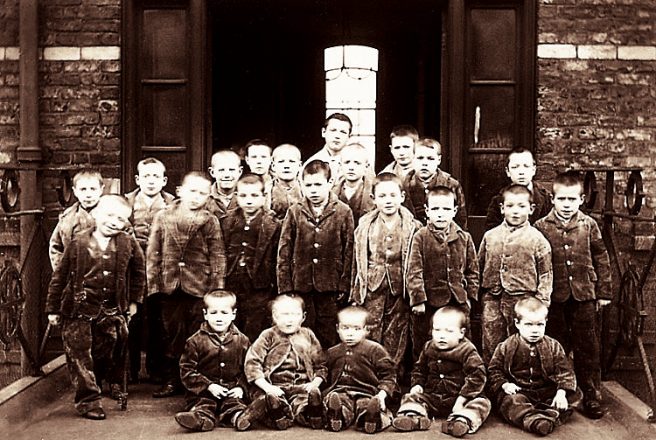 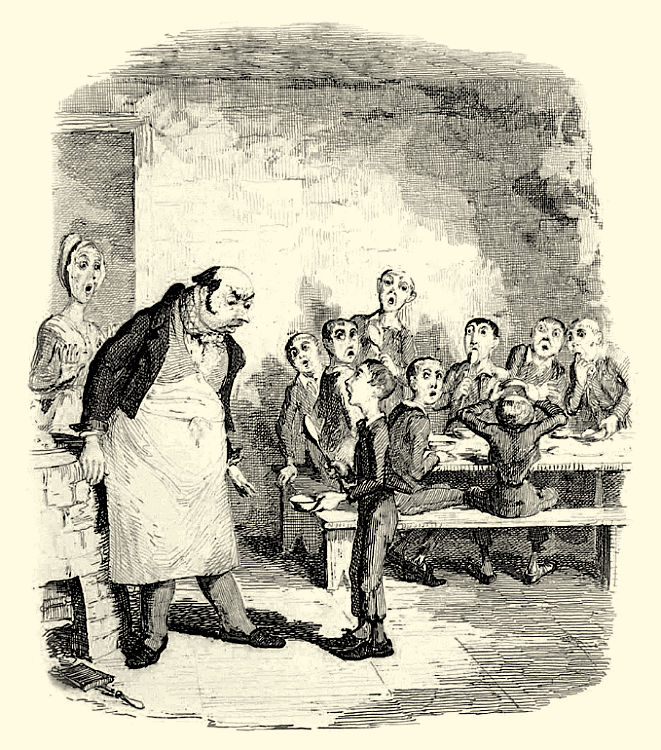 Oliver asks the workhouse master for more.  Image by George Cruikshank in Charles Dickens Oliver Twist (1839) between pages 28 and 29.

The master of the workhouse in Chapter Two of Oliver Twist is one of the most unforgettable characters in nineteenth-century literature.  From the moment he is introduced to us, serving gruel from the copper in his cook’s uniform, he does not stand a chance.  He is fat and healthy, where the inmates he reigns over are starving and scrawny.  His role is to convey visually Dickens’s feelings about an inhumane system, and when he clutches the copper, and batters Oliver with his ladle, his work is done.  He is a nameless lackey of the state, an adult bully who intimidates defenceless children.

For a dispassionate view of the workhouse master we need to look elsewhere.  The guidelines for the running of these establishments published by the Poor Law Commission—later the Poor Law Board—ask a great deal of its officers.  The master must not only oversee the running of the workhouse, and maintain good order, but he must do so “with the strictest regard to propriety” in order to set a good example.  He must keep noses to the grindstone without ever forgetting that he is a “friend and protector” of the inmates.

An incident in a London workhouse in the mid-1840s vividly illustrates the ambiguous character of the workhouse master, who seems to hover between the apoplectic bully in Oliver Twist and the firm but fair practitioner in the government model.  Certainly it warns us that judgements about these men are not straightforward.  There are thirteen important actors in the drama.  Twelve are young male inmates of St Luke’s Workhouse in Chelsea, and the thirteenth is its master, a man by the name of Daniel Sutton.

Christmas Day in the workhouse.  The paupers on the left, tucking in to their meal, are watched with great satisfaction by the visitors on the right.  Postcard dated c.1900.

MR AND MRS SUTTON
Sutton was in his late forties.  He had been born in Salisbury, and at one point in his life he had been a wool merchant living in Ringwood in Hampshire.  In all likelihood he had a connection with the Ringwood workhouse as a contractor selling woollen clothes and blankets.  If so, moving into workhouse administration would have been a natural step.  He married a local woman by the name of Charity, who gave him two daughters, and it was in order to take up appointments as master and matron at the Chelsea workhouse that the Suttons moved from Hampshire.

And it is here in the workhouse in Arthur Street, off the King’s Road, that our story properly begins.  The date was Christmas Day in 1844, when by established tradition the inmates were treated with unusual generosity.  Christmas was the season when sympathy for the poor came to the surface.  “The handmaiden not merely of festivity,” as one newspaper described Christmas, “but of charity and benevolence”.

There were three hundred and eighty-seven inmates, of whom two hundred and twenty-nine were women, and one hundred and forty-two were men.  The remaining sixteen were infants.  The Christmas meal started with half a pound of roast beef and half a pound of potatoes.  The meat course was followed by plum pudding—three quarters of a pound this time—and everything was washed down with a pint of porter.  The meal was witnessed by ratepayers of the parish, and the display of institutional generosity presumably diverted attention from conditions endured by the paupers on all other days of the year. 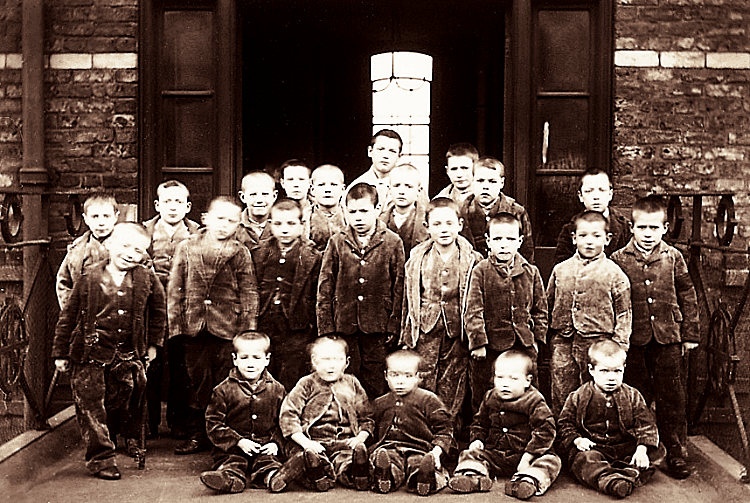 Photograph of boys belonging to the Crumpshall Workhouse in Manchester in the 1890s.  The Chelsea riot was half a century earlier, and the rioters were quite a bit older than these boys, but this is still a powerfully apt image of juvenile destitution.

BE SO KIND!
Well, the ratepayers’ generosity had an interesting effect on twelve particular inmates.  They were all male, and most were in their mid teens.  Some were rather older, and two of these, Robert Watson and William Davis, who were twenty-two and nineteen respectively, played a leading role in the drama that was about to unfold.  Another key player was Michael Hughes.  He was sixteen.

As time wore on, the festive spirit joined forces with the porter to the detriment of decorum, so much so that Daniel Sutton, who as master of the workhouse had responsibility for such matters, decided that he had to intervene.  He went along to the day-room—a recreational area—to ask the troublemakers to calm down.  The newspapers would later claim that he did so “in the kindest way”, but it is left for us to imagine what he actually said, what answer he received, and really if it was possible for the master of a workhouse to be accepted as kind—as the “friend and protector” envisaged by the government guidelines—even on Christmas Day.

Sutton might have hoped that the end of the day might bring with it the end of the trouble.  If so, he was disappointed.  For at eight o’clock, when the workhouse began shutting down for the night, he was told by an orderly that some young male inmates were asking for permission to stay up another hour.  Sutton said no, and off went the orderly.  Fifteen minutes later the orderly returned with the worrying news that the inmates were refusing to go to bed.

A watchman.  Image in W H Pyne The World in Miniature volume 1 (1827) frontispiece.

THICK AND FAST
The workhouse master now strode into the day-room, where he confronted the twelve troublemakers.  “I recommend you to go to bed,” Sutton said.  “Quietly.”  He gave them five minutes to get to their sleeping quarters.  “And if you do not obey,” he went on, “I shall feel it my duty to send for the police and give you into custody.”  Hearing this the lads sloped off, with Joseph Lamb, a watchman, leading the way with a lantern, and with Sutton bringing up the rear.

When the lads arrived in the yard, which lay between the day-room and the dormitory, Robert Watson made his move.  Actually, he did not move at all.  And that was the point: he came to a very defiant halt.  The others followed Watson’s example—no doubt he enjoyed the respect of the younger boys—and refused to go any further.  Sutton immediately recognised the challenge to his authority.  “Lock him up,” he said to the watchman.

At this point William Davis leapt into action.  He was strong, and his blood was up.  He marched over to the hapless watchman.  “Here goes for the — lantern!” he said.  (Propriety forbade the newspapers to record everything Davis said.)  He kicked the lantern out of the watchman’s hand, putting it completely out of action.  Then he advanced on the master.  “I’ll kill the — !” he yelled.  At the same time he hurled himself at Sutton, punching him violently in the face.  Sutton, no weakling himself, seized his assailant’s collar and dragged him off towards his quarters, presumably to detain him.  But as he did so he found himself surrounded by the other lads, who had responded to Davis’s shouts for assistance.

Sutton was overwhelmed.  He was knocked to the ground under a flurry of fists and feet, and the blows landed so thick and fast that he lost all sense of how many times he was struck, although he had the clear impression that the most frenzied attacks came from sixteen-year-old Michael Hughes.  As he staggered to his feet he was pushed and shoved, and his attackers tried to force him down some cellar steps.  By now, though, he was no longer alone.  Although it is not clear who had come to his rescue, he broke free and made good his escape.  An eyewitness later declared that Sutton “would have been torn to pieces” if it had not been for this timely intervention.

Assault by a Pauper and Scandalous Conduct in a Workhouse.  The female pauper in the upper illustration is seen laying into the workhouse master.  Image in The Illustrated Police News 7 October 1882.

HAVING A RIOT
Sutton staggered off to summon the police.  When he returned to the workhouse he realised that what he had thought was simply an attack against him had in fact developed into a riot.  The gang had gone on the rampage, leaving a trail of wreckage in their dormitory and the tailor’s workshop, smashing ninety-seven panes of glass and destroying three sash windows.  They had tried to break into the old men’s dormitory, breaking the panels of the door.  They had then tried, unsuccessfully, to force their way into the women’s dormitory.

The rioters were duly arrested, and on the very next day they were charged before John Palfrey Burrell, the magistrate at the Queen Square police court in Westminster.  Sutton, who had two black eyes and bruising and swelling to his face, made a convincing victim, but the young defendants denied the charges.  They had drunk too much, yes, but they had not caused a riot, nor had they assaulted the master.  Michael Hughes and William Davis protested their innocence with particular vigour.

John Bromfield Ryder, the chairman of the Chelsea board of guardians, had something to say about the matter.  He was clearly nettled by the one of the defendant’s hazy recollection of his actions—he had been “drinking a drop too much”—and he expressed himself forcefully.  Whilst the guardians and ratepayers wanted to ease the suffering of the inmates of the workhouse, they would not tolerate excesses of the sort that had marred the Christmas Day dinner.  Ryder also had reason to believe that the lad in question had bought drink from other inmates.

Burrell referred the case to the Middlesex County Sessions, and a fortnight later the rioters were tried at the Old Session House on Clerkenwell Green.  Seven were sentenced to a day in prison, but the ringleaders did not get off so lightly.  Michael Hughes and two others were imprisoned for two months, and William Davis for three.  Robert Watson, who had been the prime mover in the attack on Sutton, was also given three months.  He had scarpered when the fight broke out but had been caught later. 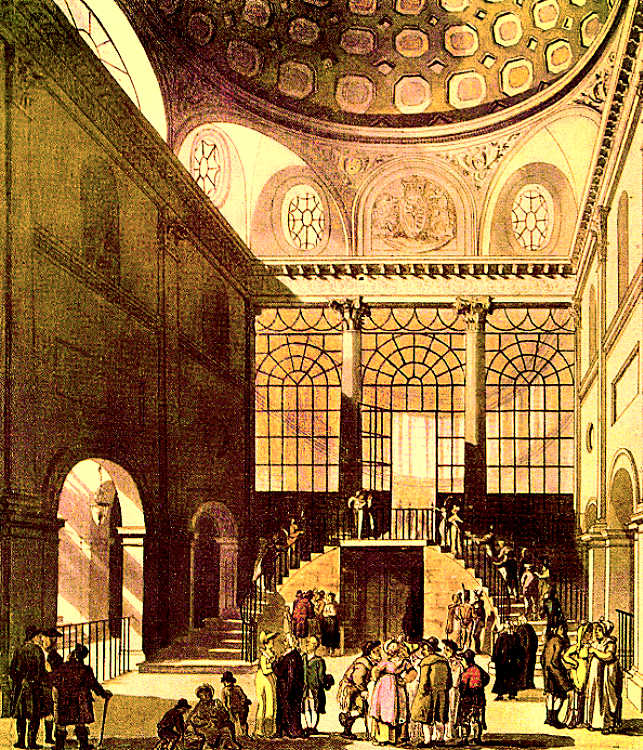 The Old Session House in Clerkenwell.  Image by Thomas Rowlandson in The Microcosm of London (1808) plate 70.[

AND AFTER
Although the various newspaper accounts of the riot in the Chelsea workhouse differ in some of the details, they fall in step in two important respects.  Firstly, they refuse to speculate on the relationship between the master and the inmates, and they present the assault as premeditated hooliganism.  Then again, they all report the view of the workhouse authorities that they have been ill rewarded for their “kindness” towards the pauper inmates.  Clearly there is a great deal that we do not and cannot ever know.

One thing we do know, however, is that Daniel Sutton’s troubles did not end in the Old Session House on Clerkenwell Green.  A week or so after the trial there was another incident in the workhouse, which involved ten male and three female paupers, more noisy defiance, and another visit to the police court in Queen Square.  When the magistrate handed out prison sentences—between ten and fourteen days—several of the male defendants laughed at him.  One of them—we do not know who—had been involved in the Christmas Day riot.  His twenty-four hours in the jug had not had the slightest effect.

Stories like these raise many questions about the phenomenon of the workhouse.  But they give no answers.  We must come to our own conclusions, trying to negotiate the grey areas between the facts, as far as we know any, and our intuitions.