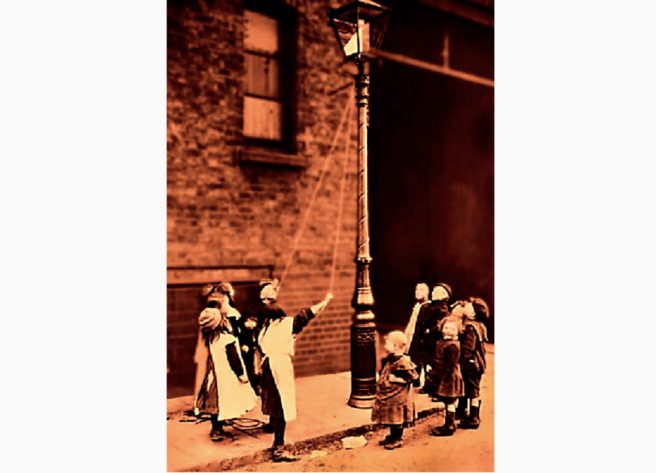 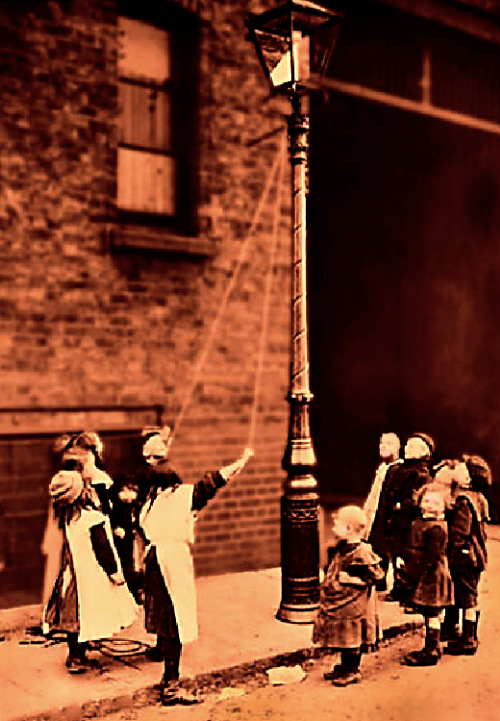 Photograph of children playing round a lamp post in 1910.  © London Picture Archive 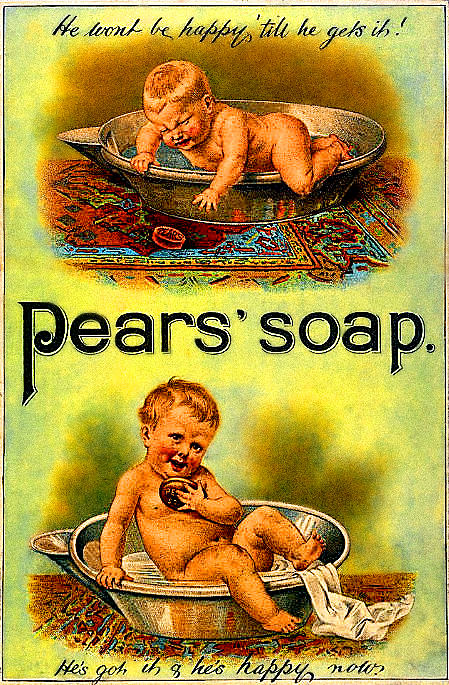 A COSTLY BAR OF SOAP
Eight-year-old Gussie Fitzgerald proudly told how he had taken three bottles of lemon squash, a jar of jam, a loaf of bread and three oranges.  The newspaper reports described Gussie, who sounds like a forerunner of the William of Just William, as speaking “laconically”!  To the amusement of the court his older brother John Fitzgerald, aged nine, admitted—shrilly—that he had stolen a bar of soap.  Soap was perhaps a strange thing for a child to take: it did not fall under the definition of an “eatable”, and it was obviously not intended for the feast.

The third boy, eleven-year-old James Stothard, said that he had taken a single egg.  So was little Gussie the ringleader, or had it been agreed that he would take the rap?  Although children from the age of eight could be held criminally responsible, the boys might have thought that Gussie would get into less trouble.  And things worked out well for the Fitzgerald brothers, as they were let off with an admonition, although one suspects that they got a beating at home.  But James Stothard—he of the egg—was not so lucky.  He was remanded into the care of the workhouse, and sent to an industrial school in Feltham in Middlesex.

AWAY FROM THE BAD EGGS
Why did James receive a more severe punishment than the Fitzgeralds?  Was he thought to be the mastermind on account of his age?  Had he previously been in trouble?  Was he sent to Feltham to remove him from the bad influence of his friends and family?  He entered the school in 1899, and was there for at least two years, and possibly for longer.  A lengthy absence from home was thought to give boys the opportunity to turn their lives around, and on release many went into the navy, or were sent to work as farm labourers far from the temptations of the city.

An aerial view of the Middlesex Industrial Schools at Feltham in Middlesex.  Wood engraving by C W Sheeres after Banks and Barry dated 1857.  Credit: Wellcome Collection  CC BY

Founded in 1854 the Feltham Industrial School could house up to seven hundred boys.  Facilities included an infirmary, workshops, a gas factory and a chapel.  Divided into groups of about fifty the inmates shared common sleeping areas, school rooms, washing facilities and punishment cells. They were described as juvenile offenders, and could be made to stay until they were sixteen, and

of the 75 boys admitted in 1901 just two had been sent for begging, six for wandering, two were uncontrollable and the majority, 65, had been charged with offences punishable by imprisonment1.

OFF TO WAR
So what do we know about James before and after his brush with the law?  Born on the 4th of September 1887 James was one of six children of George Stothard, a bricklayer, and his wife Sarah.  George was a native of Lincolnshire, and Sarah a local Battersea lass.  The family can be found at various addresses in and around Battersea: 14 Wickersley Road, Arliss Road, St James Grove and elsewhere.  When James was three, he and two of his siblings were baptised at St Bartholomew’s Church in Wickersley Road, and in 1893 he started at Sleaford Street School. 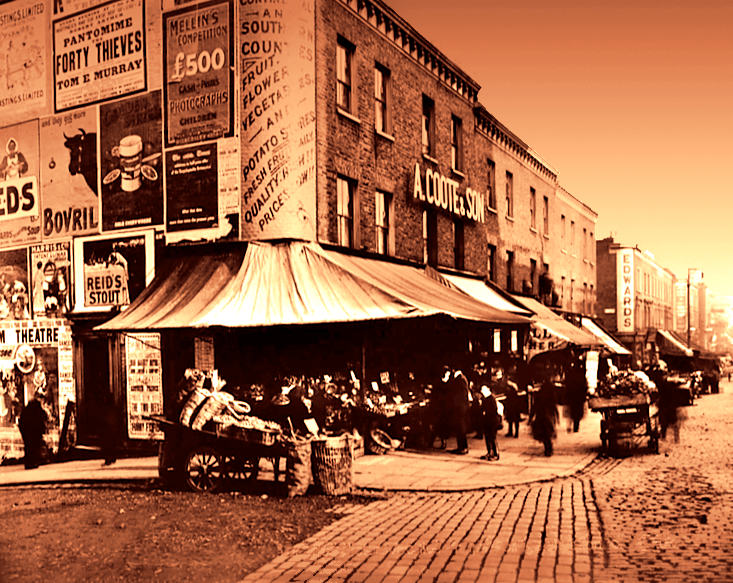 At some stage after leaving Feltham James moved to Andover to work as a house painter.  His parents were both dead by 1909, so possibly there was no reason for him to return to Battersea.  In 1916 he was conscripted, and he joined the Labour Corps of the Devonshire Regiment, who

cooked, cleaned, carried and cared for the soldiers on the front line and behind the lines. They built roads and railways, carried the wounded and buried the dead2.

The men in the Corps were those who were not “A1” fit.  To be “A1” they needed to be able to march, to see clearly enough to shoot, to hear well and to stand active service conditions.  After a month of home training James was sent to France for the duration of the war, only being discharged in March 1919.  On his return, severely damaged by his military service, he was declared 30% disabled.  His condition is recorded both as “neurasthenia” and a “disordered action of the heart”—shell shock and stress syndrome respectively.  He was awarded a pension of eight shillings and three pence, and, like many of the men ruined by war, he was sent back to an ordinary civilian life.

In 1939 James was still working as a painter and living in Andover at 88 South Street, lodging with Albert and Phoebe Shrimpton.  He died unmarried in 1952 aged sixty-four.  Perhaps James would always have lived what sounds like a lonely life, with no family of his own, or even as part of his wider family.  I cannot help wondering what his life would have been like if he had just received a caution, like the other two boys, and had then been returned to his family.

THE OTHER TWO
And what of the Fitzgerald brothers?  Gussie—Michael Augustine or Augustine Michael—and John were two of six children born to Michael, who was a machinist from Barnstaple in Devon, and his wife Sarah, who was from Norfolk.  Like the Stothards they also moved around a lot.  Gussie has been hard to find: neither he nor John were living with their family in 1901.  The 1911 census says that of the seven Fitzgerald children two were dead.  A sister died in 1908, and, as I have been able to trace them all except Gussie, I assume that he was also dead.

John Thomas Fitzgerald did not stay in the bosom of his family for long after his caution for shoplifting: he was sent to St Vincent’s Industrial School for Roman Catholic Boys in Dartford in Kent in November 1904.  Was this because he was trouble, or did it have something to do with the fact that his parents had separated after more than twenty years of marriage? 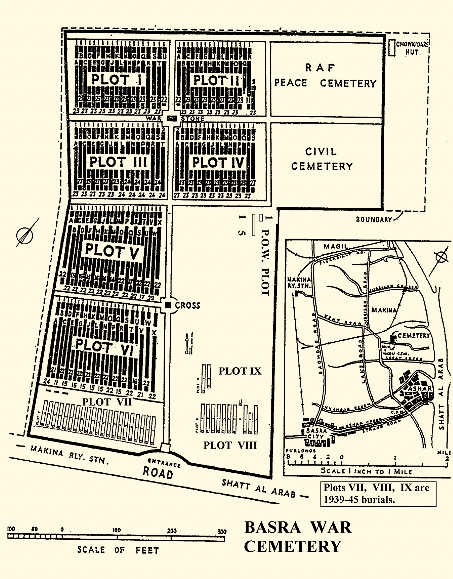 John’s later career suggests that he was a troubled young man.  In 1905, aged fourteen, and measuring five feet with brown hair and grey eyes and a fresh complexion, he enlisted as an army bandsman with the Royal Inniskilling Fusiliers.  By September 1909 he had deserted, only to re-join two months later.  At the beginning of 1912 he deserted yet again, and was only found several months later when he was apprehended for a civilian theft.  This time the army had had enough, and he was discharged.

A LONG WAY FROM BATTERSEA
At the very start of the First World War John joined up yet again, this time with the East Kent Regiment, which was known as the Buffs.  He was twenty-five years and seven months old, and he had grown to five feet four inches, but his army career yet again hit the rocks when after only two weeks he was discharged as not likely to be a good soldier.  In 1915 John joined up again.  Within days he had absconded en route to his first posting.  Perhaps he was reluctant to embrace the military life because he had a presentiment of things to come.  For he was soon found, and less than a year later, having been sent abroad with the Mediterranean Expeditionary Force, he died.  The date was the 1st of August 1916, and the place was Mesopotamia—now Iraq—and there in the war cemetery in Basra he was laid to rest.

1 Gilliam Carol Gear “Industrial schools in England,1857-1933” (doctoral thesis) 63.
2 “Commemorate the Labour Corps for the unremembered” at the website of the The Western Front Association.