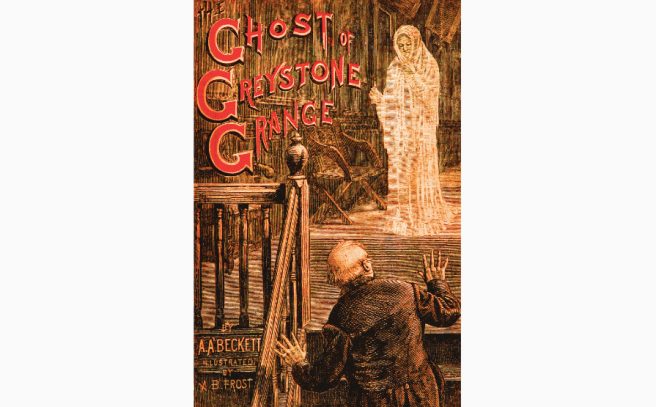 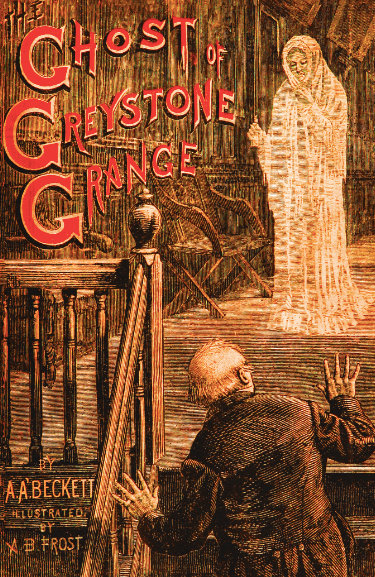 Mid-nineteenth century London, just south of the river in Southwark.  As darkness falls, a crowd gathers hoping to see the ghostly apparition that haunts an unoccupied run-down building on the south side of Stamford Street, near the junction with Blackfriars Road.  Through the broken windows can be seen the shape of a woman, sometimes even of two, flitting through the rooms dressed all in white, and lit by a flickering light.  The story of the haunted house in Stamford Street centres around a creative family, their quarrels, law cases and a very large endowment that made possible the building of the south block of the Brompton Hospital for Consumption and Diseases of the Chest.

On Wednesday the 6th of December 1871 the elderly owner of the haunted house died at her residence at 43 Stamford Street.  It was rumoured that Miss Read was emaciated, lived in filth and survived on a diet of stale buns, perhaps from Pring’s Bakery next door.  The eccentric Miss Cordelia Angelica Read received no visitors in her neglected home, and was not very popular with her neighbours.

Miss Read—perhaps surprisingly—came from a rather remarkable family.  Her maternal grandparents were Isabella and Edward Beetham, the former the famous silhouettist, and the latter a resourceful jack of all trades: actor, theatrical safety curtain designer, publisher, insurance agent and inventor of the Beetham’s Patent Washing Mill.  Their eldest daughter Jane—Miss Read’s mother—inherited her mother’s artistic talents and worked alongside her.  She was a miniaturist, and studied under a family friend, the Cornish artist John Opie.  Eventually her uncle, the Rev William Beetham, expressed concern about the amount of time she spent alone with Opie, which resulted in a family rift between Edward and his brother.  After divorcing his wife Opie approached Edward for permission to marry Jane.  He was refused on the grounds of his divorce: having eloped themselves, the Beetham parents may have felt that this would be one family scandal too many.  Instead in 1800, whether through choice or parental coercion, Jane married John Read, a widowed solicitor.  Read is described as rich, eccentric and elderly by Ada Earland in her 1911 book about Opie.  Given that John was thirty-three and Jane was twenty-two or twenty-six or twenty-seven—these are the various ages suggested by the census and other records—this seems a bit harsh! 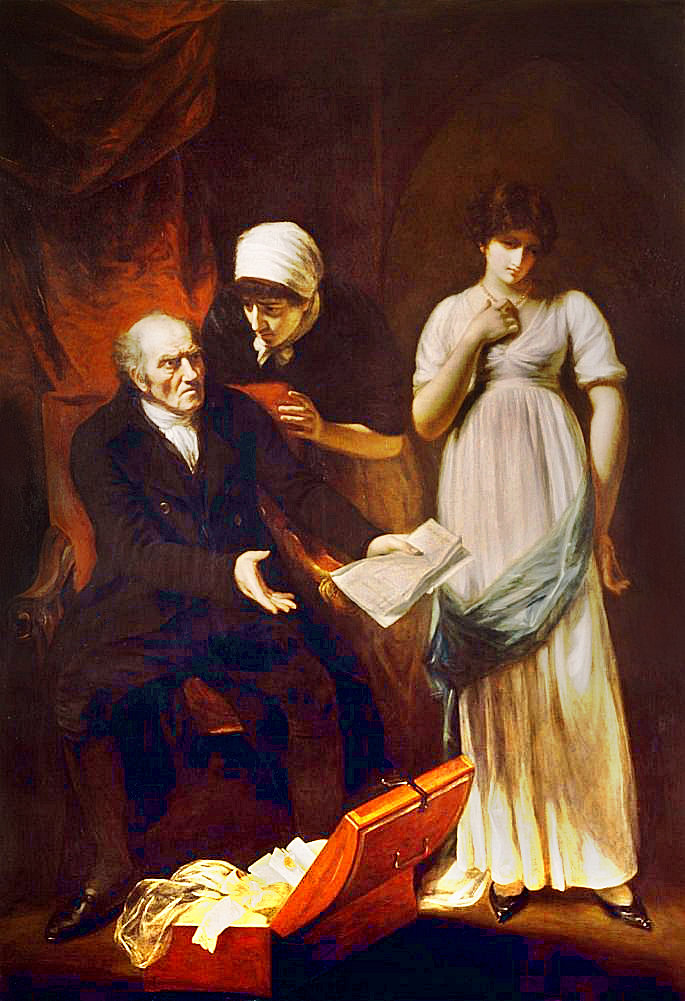 An angry father reproaching his daughter after intercepting a love-letter to her by John Opie.  Credit: Wellcome Collection  CC BY

The Reads initially lived north of the river, where their daughter Cordelia Angelica was born on the 27th of January 1801.  In about 1827 the family moved over the river to 22 Stamford Street.  The evidence suggests that John owned considerable property in this area.

We have reason to believe that the houses belonging to John in Stamford Street were uninhabited and neglected when he was alive.  In 1846 a James Fling was found guilty of attempting to steal a washing copper and lead from one of these abandoned properties.  His excuse was that he had been sheltering from the rain.  He was not believed, and was imprisoned for twelve months.

In 1847 John Read died leaving his personal estate—money, fixtures and fittings—to his wife and his real estate—property—to his daughter.  Mother and daughter lived together for another ten years with one or two live-in servants.  Although the houses were in a bad state of repair, Mrs and Miss Read were not entirely negligent.  They continued to inspect the properties nightly to ensure everything was locked and nothing was missing, and it was this nocturnal habit that gave rise to the story of the haunted house.

One might suspect John of eccentricity in leaving the houses empty and in a state of disrepair, but this continued into the next generation.  In 1863 a Mary Cornish—also called McCormick, McCormack and Cormack in various newspapers—of 41 Hatfield Street declared that she and not Miss Read was the rightful owner of the Stamford Street properties.  Supported by a mob she broke into several houses, and laid claim to them by saying “Now show us your title deeds”.  There seemed to be considerable ill-feeling towards Miss Read: on one occasion the elderly lady was forced to escape from the mob over the roof.  In court she explained that the houses had been neglected since the time when her father owned them.  She had thought about repairing them, but collecting the rent from all her other properties meant that she did not have the time.  Mary and some of her supporters were found guilty of unlawfully occupying numbers 1, 2, 3, 5, 19, 20 and 22 Stamford Street.

At the end of 1871 Miss Read fell ill.  Her servant, Susan Goring, who had been with her for two or three years, called for Dr Johnson of York Road.  The doctor, no doubt concerned about the state she was living in, or perhaps being acquainted with her cousin—another local doctor—asked Miss Read about her relatives.  Miss Read took umbrage at his interference, dismissed him and summoned Dr Edwin Canton, the house surgeon of Charing Cross Hospital, to treat her instead.  Within days the old lady was found dead in her chair in the back room.  She was buried on the 14th of December 1871 at Kensal Green Cemetery. 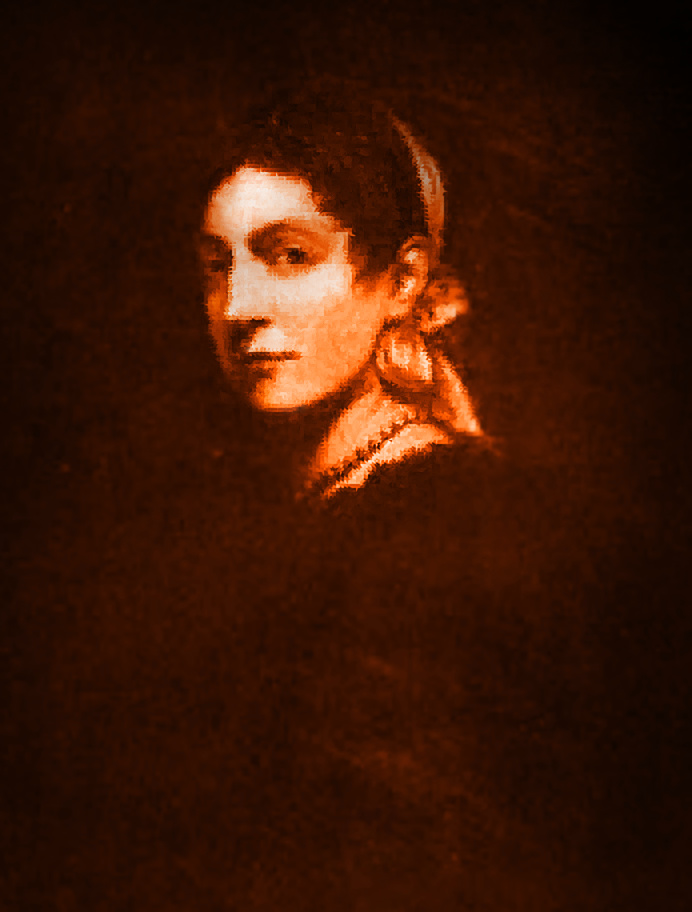 It was revealed that Miss Read was not as poor as her living conditions might suggest.  For one thing she was able to employ servants.  Then again her house, although filthy, was full of fine furniture and Georgian silverware, and there were paintings on the walls.  As her servant Goring explained, the old lady was so far from subsisting on stale buns that she enjoyed a diet of brown bread, meat, vegetable, port and pastries.  Her eccentricity could not be denied—the squalor and the room full of hats and bonnets from a bygone age—but she sounds as sharp as a knife, determined and somewhat curmudgeonly.  On her death she owned at least eight properties in Stamford Street, and had thousands of pounds in the bank and in stocks and shares.  Her personal possessions included furniture, paintings, trinkets and jewellery.  In fact Miss Read was a very wealthy woman with assets of one hundred and twenty thousand pounds—the equivalent of thirteen million pounds in today’s money.

As she had never married, and had no direct descendants, her wider family expected to inherit.  But Miss Read had other ideas.  In her will she left the greater part of her personal wealth to the Brompton Hospital for Consumption and Diseases of the Chest.

The family stepped in to challenge the will.  A cousin once removed by the name of Dr Chabot—John Read’s great nephew—demanded that an inquest take place.  He thought that there was evidence of negligence.  Mr Carter reluctantly conducted the inquest in the Brunswick Tavern in Stamford Street, saying that he was only doing so because of the family’s concerns.

There was nothing to suggest that poor Susan Goring stood to benefit from her employer’s death.  In spite of Miss Read’s promise that she would be well looked after, she was left not a bean.  Dr Carton explained that the old lady had died of bronchitis and fatty degeneration of the heart—a natural cause of death for someone of her age—and the coroner issued a statement that there was no suspicion about the honesty of “any person near or about her decease”.

The family were not going to allow the hospital to enjoy the legacy without a fight, and wanted to know if Miss Read was compos mentis.  There was some suggestion that they wanted to have her head opened.  Dr Carton obviously thought that she was on the ball, explaining that she could speak Latin!  The suspicion that perhaps she was not in possession of all her faculties was swiftly dealt with: if she had neglected her properties, she had done so to spite her nephew, with whom she had quarrelled.  (“Nephew” is used here to describe her cousins once removed.)

The Hospital for Consumption in Brompton Road in Fulham by Frederick John Francis.  Engraving dated 1844.  Credit: Wellcome Collection  CC BY

Apparently the Beetham/Reads liked an argument.  Isabella and Edward had been cut off from their families when they had eloped, and in their turn they were cross with Uncle Rev William Beetham for warning them about Jane’s conduct with Opie.  Possibly Jane was cross with her sisters Harriet and Cecilia when they inherited on their mother’s death.  As for Miss Cordelia Angelica Read, she obviously did not get on with her neighbours, and gave Dr Johnson short shrift when he dared to ask about her family.

It is likely that Miss Read’s cutting her family out of the will was connected to the way her cousin James Chabot behaved when the newspapers reported his marriage and subsequent shameful divorce.

In October 1847 Chabot had married Bridget Matilda Georgiana Keifferman, a Kennington eating-house proprietor.  Within a few weeks of the marriage James had committed adultery with a Mrs Ashley, had hit Bridget, had knelt on her stomach, had given her two black eyes and had refused to cohabit.  In April 1848 Bridget gave birth to a still-born child, possibly as a result of the physical violence she had endured.  James by now was living with a Sarah Austen.  When divorces became possible for the middle-classes, they parted company.  This was in 1859.  James married a Harriet Austen, who was quite possibly the Sarah he had been living with.  Cordelia wrote her will before the divorce, but I suspect that the knowledge of what James had done, and of what he was now planning, may have influenced her decision.

The surviving executor, Charles Shepheard, took the family to court so that Miss Read’s final wishes could be carried out.  In May 1872 the Right Honourable James Plaisted, Baron Penzance, pronounced the validity of the will, and the Brompton Hospital received the major share of her wealth.  In time the Stamford Street tenements were sold and redeveloped.  The hauntings were no more.