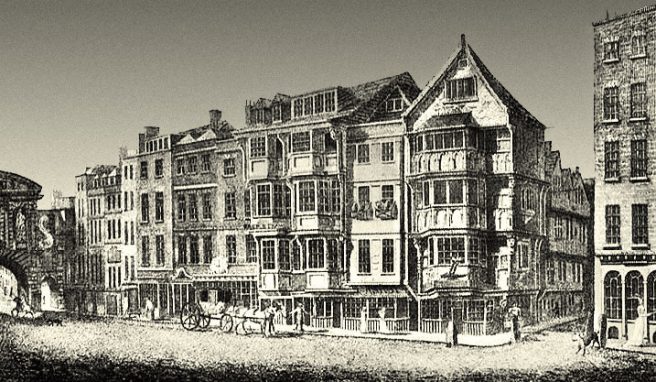 A row of eighteenth-century houses on the north side of Fleet Street, with Temple Bar on the left and Chancery Lane on the right.  No.197 was a few doors from Chancery Lane.  Print by William Capon.

Walk along the north pavement of Fleet Street between Chancery Lane and Bell Yard, and you will pass a heavily rusticated building of imposing proportions, home of an executive recruitment firm and a magazine publishing company.  But in the late eighteenth century there stood here a row of brick-fronted premises, one of which was owned by a Benjamin Rackstrow.  He was a really rather remarkable man, and at this Fleet Street address—no.197—he operated a really rather remarkable museum.

Rackstrow was a man of means.  Boswell notes that he was colonel of the city militia known as the London Trained Bands, and that he had a decidedly inert Dr Johnson on his lists.  He was also a skilled craftsman with very individual tastes, and his museum—entrance one shilling—was described by Timbs in his Curiosities of London as “a Fleet-street sight”.  The signboard displayed the head of Sir Isaac Newton—a clue to the bizarre collection that awaited the visitor—and indeed there was a wax cast of the great scientist sitting alongside those of Oliver Cromwell and other eminent historical figures in the fourth of the five rooms.  The museum catalogue claimed that these casts of these distinguished men had been taken “from the very Impressions of their Faces after Death”.  They were “moulded and coloured to life”.  They were also, it should be said, among the less alarming of the exhibits in Rackstrow’s collection.

MASKS AND STATUES
Not all of Rackstrow’s subjects were dead.  In 1757, for example, he displayed the wax impression of the swollen face of a London tradesman who had had a tumour cut out from his mouth and needed to raise money to pay the surgeon.  He advertised his services to the living, claiming that he was able to produce busts “to an exact Likeness”, and assured his clientele that the procedure was “as little Trouble as sitting to be shav’d”.  He could not have known how grimly prophetic this latter boast was.  For Sweeney Todd, the murderous barber of urban lore, and maybe—just maybe—of fact, had his shop only doors away at 186 Fleet Street.

Wax masks from the living and from the dead do not seem quite so strange in light of Rackstrow’s artistic activities.  He made drawing-room ornaments in plaster, and garden ornaments in lead.  He was also a sculptor, and records have survived of some of his commissions—busts of the Marquess of Granby and of a Mr Frye, a figure of Edward VI, and of “a figure of a gentleman, sitting, as large as life”.  This last sculpture was exhibited in 1763 by the Free Society of Artists at their rooms in Spring Gardens.  Horace Walpole jotted down in his copy of the catalogue that it was “so very near to life that everybody mistook it for real”, so much so that it “frightened an apothecary”, and had to be removed.

THE CHAIR OF BEATIFICATION
But Rackstrow was more than just a sculptor.  He was also a curious sort of scientist, which is no doubt why he was so enamoured of Sir Isaac Newton.  His particular interest was electricity, and in 1746 an advertisement appeared in the London Evening Post heralding an exhibition in his Fleet Street premises of “surprising EXPERIMENTS” that demonstrated “the Power, Light, and actual Fire of ELECTRICITY”.  The apparatus—a seventeen-inch glass sphere turned by a massive wheel—was an electrostatic generator.  Rackstrow promised his visitors that a person receiving the charge from this machine would “emit Fire from any Part of his Body, so as to light Spirit, and all inflammable Fluids”. 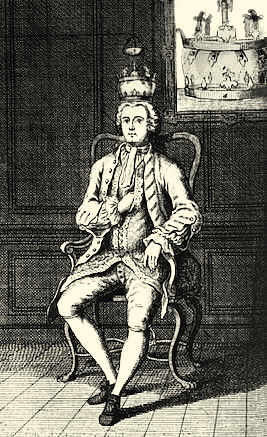 The Chair of Beatification.  The painting on the wall is an enlarged picture of the crown.  Image in Benjamin Rackstrow Miscellaneous Observations.

In a pamphlet on the same subject, Rackstrow described another experiment, which he called, mysteriously, the Chair of Beatification.  An illustration shows an unsuspecting gentleman wearing a strange glass crown, the base of which, a brass plate, made electrical contact with his head.  A massive charge was applied to a second plate suspended some six inches above the crown.  The charge leapt across the air gap into the crown, which lit up “as if almost fill’d with fire, by numberless rays of light darting in different forms from top to bottom in a glorious manner.”  The experiment demonstrated that electricity “passes thro’ the Pores of all Bodies”, and the glowing light that bathe the body of Rackstrow’s victim accounted for the reference to beatification.  One cannot help noticing how closely the apparatus resembles Old Sparky, the ghoulish machine of execution still found in some American penitentiaries.

ANATOMICAL MODELS
Rackstrow also discusses the general principles of electricity, and some of his examples of conductors and insulators, all to be found in his museum, are quite surprising.  The pizzle of a whale, for example, passes electricity, but spermaceti does not.  Nor for that matter does the horn of a rhinoceros, the jaws of a tiger-shark, or, rather more disturbingly, the skin, bones or muscles of a fourteen-year old boy.  Thankfully, the boy on whom these experiments were carried out was not alive at the time: he was a laboratory specimen.  Rackstrow, a granite-hearted disciple of the Enlightenment, betrays not the slightest emotion at the tragedy of childhood death.

If this suggests that Rackstrow’s museum appealed to the darker corners of his visitors’ curiosity, he was certainly not keeping quiet about it.  Thus his promotional material made constant reference to the “FIGURE of ANATOMY”, a wax model made by the anatomist Abraham Chovet, purportedly for the training of surgeons.   The figure was of a woman, heavily pregnant, her innards laid bare in the manner of a dissection.  The veins and arteries were made of glass, and were filled with a red liquid.  The flow of blood between mother and child, the beating of the heart and the pumping of the lungs were revealed for the edification—and maybe also the titillation—of Rackstrow’s paying customers.  She was, incidentally, only one of the many items illustrating human generation, in all its stages.

Another medical modeller, an Academician by the name of Guillaume Desnoués, claimed that his waxworks satisfied curiosity without the obvious drawbacks of peering inside real corpses.  He exhibited in London, and in his advertisement he claimed that the collection could be viewed by candlelight as effectively as by daylight.  Candlelight viewing, with the flickering play of eerie shadows, no doubt added a touch of fear to the macabre spectacle.  Equally, it extended opening hours, making the enterprise more profitable for Monsieur Desnoués.

In 1736, following Desnoués’s death, the collection was auctioned off, and some items went to Rackstrow’s museum, where they were displayed alongside Chovet’s pregnant woman.  At some point Rackstrow took his Desnoués pieces to Ireland, where he sold them to the Earl of Shelbourne, who in his turn donated them to the school of anatomy at Trinity College Dublin.  Tradition has it that Jonathan Swift had a hand in these transactions. 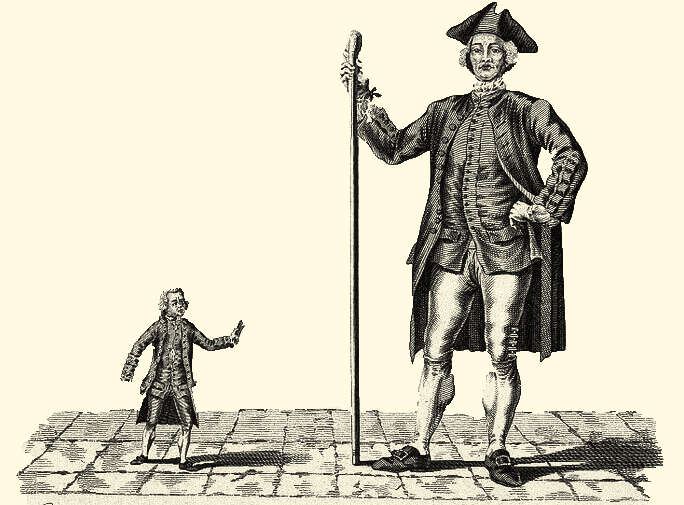 CONCLUSION
But grisly medical specimens were only part of this strange collection.  There were natural wonders, too.  Some—the stuffed skin of a young seal, the shell of a large tortoise, a collection of butterflies—would not disgrace a modern museum of natural history.  Others—models of dwarfism and gigantism, and representations of the extremes of old age and youth—most certainly would.  Rackstrow knew how to pass off even the latter scientifically respectable, and, in any case, he was able to offer many as it were neutral delights: an Egyptian mummy, a shell-work model of St Peter’s in Rome, an ivory Chinese pagoda, a perpetual motion machine.

Rackstrow died in 1772 but his museum did not die with him.  Like the perpetual motion device, it just kept going.  Public appetite was seemingly inexhaustible.  Inevitably, though, the day came when even that almost frictionless machine ran down, and, early in the nineteenth century, the remarkable ensemble—the preserved lizards and Surinam toads, the beautiful examples of stained glass, the carving of a bathing Venus, the magnet that held up to 100 lbs—were dispersed under the auctioneer’s hammer.

A NOTE ON SOURCES
My main sources of information in researching this topic were eighteenth-century newspapers and the following printed items: Benjamin Rackstrow Miscellaneous Observations, together with a Collection of Experiments on Electricity (1748); Guillaume Denoué  A Brief Description of those Curious and Excellent Figures of the Human Anatomy in Wax (1790); A Descriptive Catalogue (giving a Full Explanation) of Rackstrow’s Museum (1792).