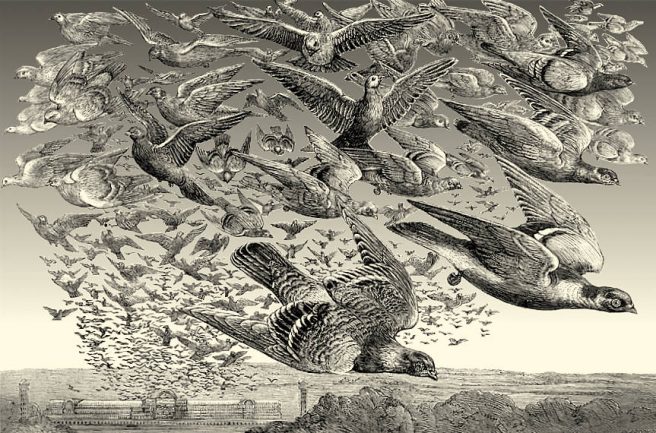 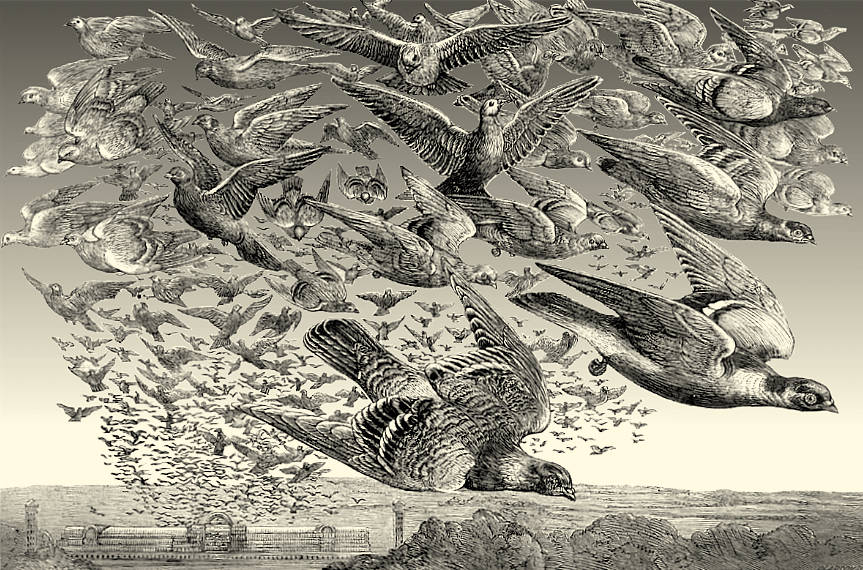 The Anglo-Belgian Pigeon Concours gets under way.  Image in The Graphic 8 July 1871.

There is a remarkable picture in the issue of the Graphic published on the 8th of July 1871.  The scene is dominated by a flock of birds streaming up into the sky from a building of vast dimensions, which on closer inspection turns out to be the Crystal Palace in Sydenham.  The dwarfing of the distant structure by the birds at the front of the flock completely defies expectations.  The picture is charged with a surreal beauty.

The birds are in fact pigeons, and those “portraits” that are large enough to have appreciable detail have been drawn and engraved with dazzling skill.  Each subject is individual, not only in the layering of the feathers, but also in the the angle of flight, and the position of the wings.  They are endlessly varied, the product of an age that delighted in eye-catching arrangements of brilliantly coloured birds in glass cases.

And the occasion?  The pigeons have set out on a race—the first of its kind—that will take them away from London and across the North Sea to Belgium.  The name of this extraordinary event was the Anglo-Belgian Pigeon Concours, and, as you will see, it had a curious and surprising history. 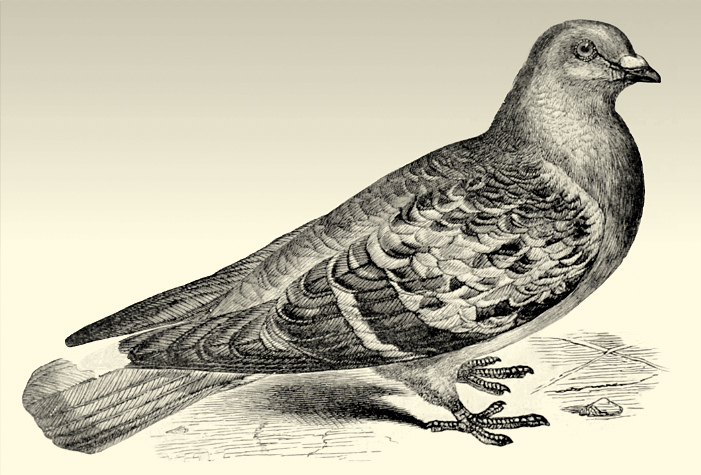 A smerle or Belgian homing pigeon.  Image in Edmund William Richardson A Veteran Naturalist: Being the Life and Work of W.B. Tegetmeier (1916) between pages 68 and 69.

BELGIAN BORN AND BRED
Even before 1871 the pigeon race or concours was a common activity in Belgium.  One would find a société colombophile in almost every town and village, the purpose of which was to train pigeons voyageurs to travel great distances.  One such society was said to own fifteen thousand birds.  There were reports of epic journeys into Belgium from way beyond its borders.  Pigeons released in Rome, for example, made their way back to Liège, crossing the Apennines and the Alps at altitudes in excess of seven thousand feet.

Belgium could claim famous varieties.  The smerle from Liège was noted for its speed.  The cumulet from Antwerp had great stamina, flying so high as to be out of sight for hours.   And it was in Belgium—and also in the neighbouring countries of France and Holland—that the true homing pigeon was bred.

The homing pigeon was a worker, a carrier of messages, and it was widely employed.  In England the “dragoon” or “dragon” was the chief carrier until the introduction of the superior Belgian varieties, and it cropped up in some unlikely settings.  The London newspaper Bell’s Life had the results of horse races flown in over great distances, although from time to time the chain of intelligence was broken by a predatory hawk or a sportsman with a beady eye and a gun.  Baron Rothschild resorted to similar methods to collect news of the money markets in Paris, although his pigeons worked in relays.  The Paris pigeon handed on the message—not literally, of course—to its colleague in Calais.  The Calais pigeon darted across the sea to Dover.  From there the vital information was carried post haste to Sittingbourne and from Sittingbourne to Blackheath and from Blackheath to the capital. 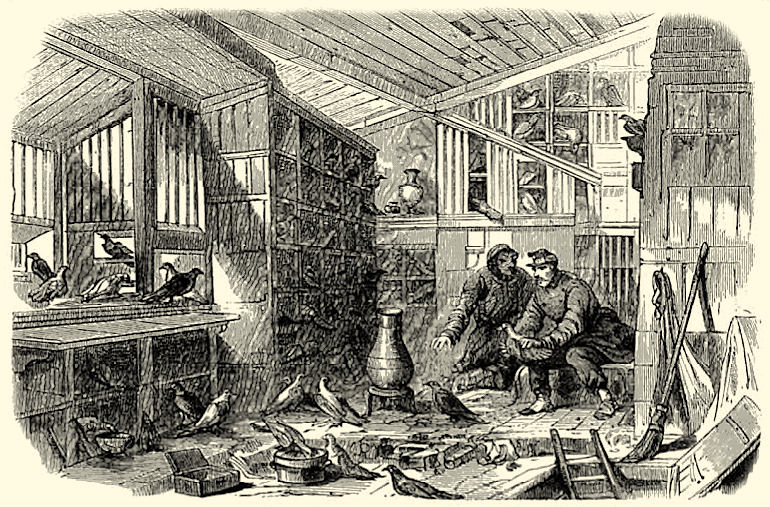 A dovecote where homing pigeons are prepared for action during the Siege of Paris.  Image in L’Illustration, Journal Universal volume 57 (11 February 1871) page 76.

WAR AND PEACE
The homing pigeon had also played an important role in the Franco-Prussian War, which had ended only weeks before the Crystal Palace concours.  With Paris under threat of siege carriers were sent out of the city, ready to bring secret messages as they fluttered back home, while others were imported into the city from the north of the country, ready to carry messages out.  The messages were written in tiny characters on very thin paper—microphotographic methods were also used—and the paper was rolled up and inserted into the quill of a goose or a crow before being attached to the tail feather of the carrier.  And so the patriotic pigeons voyageurs flew hither and thither on their vital missions, literally above the heads of the Prussian troops.

Prize pigeons at a Philoperisteron Society meeting at the Freemason’s Hall in London.  The word “philoperisteron” is derived from Greek and means “pigeon-fancier”.  Image in The Illustrated London News 23 January 1864.

Meanwhile the genius of the English columbarian was for breeding the “fancy” varieties—the fantails and the baldheads, the jacobins and the tumblers, the trumpeters and the beards and the nuns.  Some recognition must be given to English varieties that had the homing instinct up to a point—the skinnum so beloved by the London breeders, for example—but they were not the real McCoy.  “The carrier pigeon of our shows,” mused a commentator on the Crystal Palace event, “is about as much like the real working bird as anchovy paste is like anchovies.”

The Crystal Palace in 1871 by Camille Pissarro.

SHARED PASSIONS
The Anglo-Belgian Pigeon Concours took place on the 24th of June.  A large crowd of spectators had gathered on the slopes of Sydenham—it was a Saturday—and they were in festive mood.  A reporter from the Daily Telegraph noted that a passion for pigeons broke down all barriers, for

weavers from Bethnal-green, guardsmen from Knightsbridge, students of natural history from all parts of London, many parts of England, and some parts of the European Continent, were instantly on familiar terms with one another, and each with all.

Large wire cages had been arranged along one of the terraces, almost entirely covered with green baize, and with only a small gap at the front through which the spectators could peer at the feathered competitors.  Behind each cage stood an attendant, ready to release the captives at the start of the race. 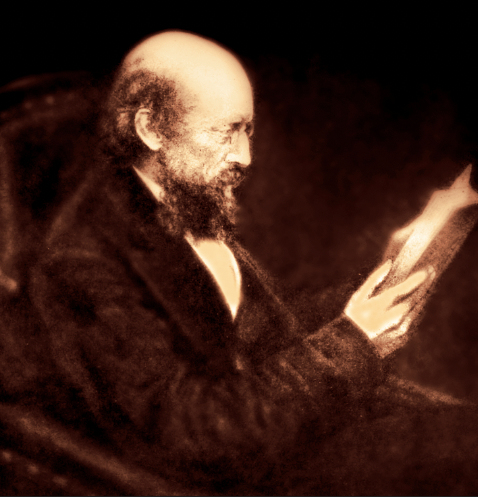 William Bernhardt Tegetmeier photographed at the age of sixty-two by Edward Draper.  Image in Edmund William Richardson A Veteran Naturalist: Being the Life and Work of W.B. Tegetmeier (1916) between pages 26 and 27.

But before the race started a brief ceremony took place.  A representative of the Belgian sociétés colombophiles—the pigeons, we remember, would be racing home across the North Sea—produced two handsome bronze medals inscribed with uplifting mottoes and the figure of a pigeon carrying a laurel branch in its beak.  He presented one of the medals to Mr Wilkinson, the General Manager of the Crystal Palace, and the other to Mr Tegetmeier, the Honorary Secretary of the Concours.

William Bernhardt Tegetmeier was a remarkable man.  Born in 1816 to a German father—a surgeon from Hanover—he received a medical education.  He started out as assistant to a doctor in Northamptonshire, but he also worked as a teacher and a freelance journalist.  He wrote extensively on natural history, and collaborated with Charles Darwin on the subject of bees.  But his principal interest, which he also shared with Darwin, was the breeding of fowl and pigeons.  He sported a bushy beard, favoured broad-brimmed hats, and gained a reputation as one of the more colourful members of metropolitan society.

MAGNIFICENTLY AND VERY HIGH
Given his high profile in columbarian circles, it was quite appropriate that Tegetmeier should be the presiding genius of the concours.  A bell was rung, which was the signal for the race officials to ask spectators to step away from the cages, and to rope off the terrace.  Then at midday precisely the distinguished naturalist gave the word for the race to begin.  The moment the cages were opened the liberated pigeons streamed out and up into the sky.  The imagination of the attendant reporters also soared, and the Morning Advertiser made the fanciful claim that

after ascending to a great height, most of the birds keeping close company, they seemed to pause on one spot, as if they were taking the bearings of the country, and after some apparent converse with each other they one and all made off in great haste in the direction most likely to take them home. 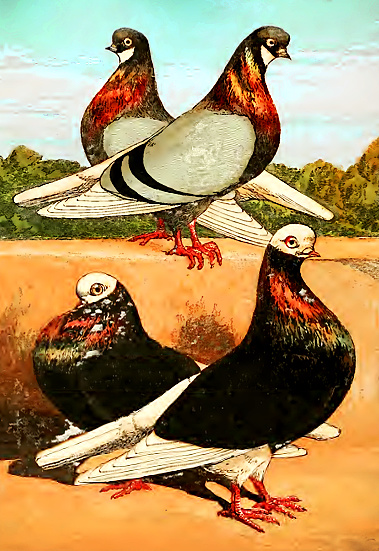 Beards and baldheads.  Image by Harrison William Weir in William Bernhardt Tegetmeier Pigeons: Their Structure, Varieties, Habits, and Management (1868) between pages 110 and 111.

However, while the mass of the competitors climbed the skies, three or four flapped around at a less exalted height, seemingly uninterested in the race.  Later it was revealed that two of these rogue pigeons were not even Belgian: they belonged to an English chap who was curious to see if they would follow the crowd.  But instinct proved stronger than social intelligence, and, as their continental rivals headed east, the two English pigeons wheeled round, and flew off to their home in the west.

The Belgians numbered near enough six hundred.  Among them were veterans of the recent war, but they were all heroes in their own way.  Soon, though, as in all long-distance races, they formed into clusters according to ability.  The field—is this the word?—was led by two flocks of about twenty-five birds each.  They passed over Dover before two o’clock, and the enthusiasts on the ground, craning their necks skywards, pointed with gasps of astonishment at the progress of these élite performers.  The first flock had its leaders flying far ahead, then, after a considerable interval, the second flock went over, it too with its vanguard furiously working their wings.  The poetry of the moment was not lost on the reporters.  “Flying magnificently,” the Graphic noted, “and very high.”

GIVING UP THE GHOST
By four o’clock all the racers had flown through the airspace above Dover and on across the sea.  The first to reach home came to rest in Brussels at one minute to six.  News of the victory was immediately telegraphed to the other Belgian stations—at Bruges in the west, at Liège in the east, and elsewhere—and most pigeons were home by eight.

Most but not all.  For one of the Belgians returned to Sydenham.  Nobody knew why.  Several hours had passed from the start of the race: time enough for the lone pigeon to have reached the coast and turned back.  Had it trailed so far behind the other racers that eventually it had lost heart?  Had it thrown in the towel?  Given up the ghost?  And would we rather it had struggled on, fighting to the bitter end?  Oh, but it knew nothing of so lofty a sentiment, having, after all, only the brain of a bird.