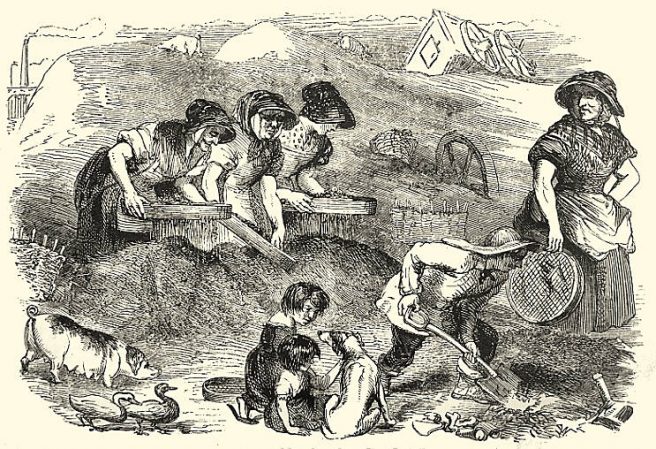 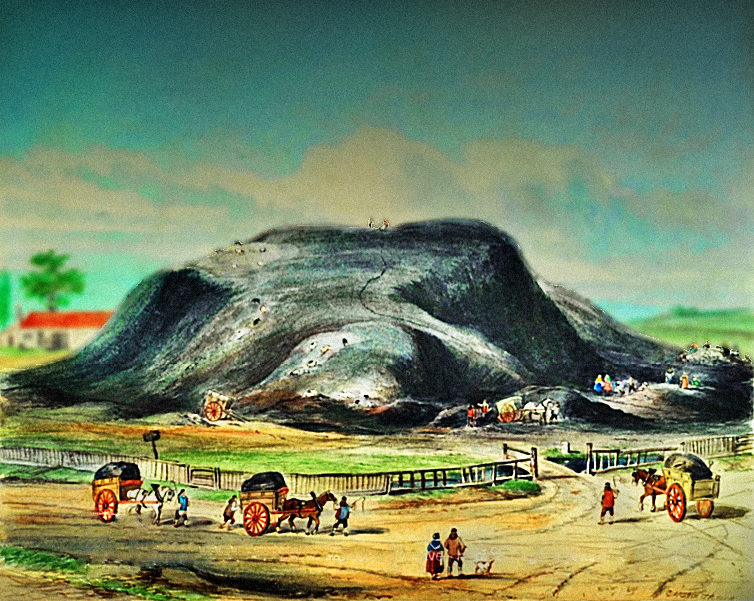 In volume 5 of Old and New London Edward Walford describes at length what was then the north-western suburb of Paddington.  Time had wrought dramatic changes.  When the Great Western Railway opened in 1840, the wide spaces of Paddington were still a patchwork of market and nursery gardens, and working men and working women lived in picturesque poverty in red-tiled weather-boarded cottages.  But all that was swept away in the decade that followed.  There is an unmistakable sense of nostalgia and regret in the writing.

Although some fine terraces and squares had sprung up, the approaches to Paddington from the Edgware Road—along Praed Street or Harrow Road—presented a shocking sight.  Walford, who used the phrase “very deplorable” to describe the squalor, interviewed a local resident, and was told in no uncertain terms that the area, disfigured by urbanisation, had gone downhill.  The Green, once secluded and villagey, had “all the refuse of the neighbourhood” standing on it in mountainous piles, while stagnant water collected in its malodorous hollows.  And Paddington had become “the playground of idle boys”.  Children squalid with neglect ran riot—fighting, swearing, shouting, crying, throwing stones—and intimidated passers-by.

Then there were the preachers.  The disillusioned local had no time for these proselytisers, who would “rant and vociferate” even more loudly than the feral children, and engage in doctrinal arguments with Freethinkers.  But London Overlooked would ask the reader to judge more kindly one particular man of God who haunted the Paddington wasteland.  His name was Henry Pearson, and what follows is his melancholy story. 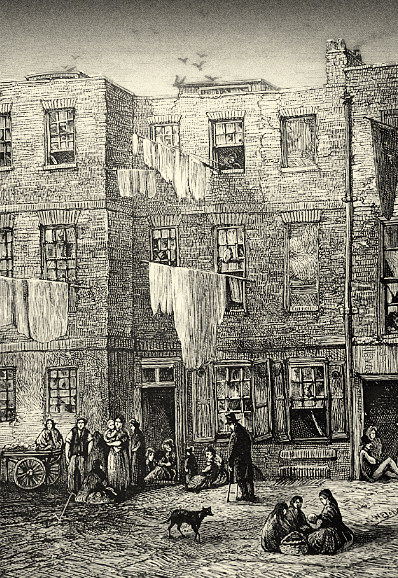 An example of the impoverished areas where the London City missionaries operated.  Image of Wild Court in Seven Dials in John Matthias Weylland These Fifty Years (1884) between pages 8 and 9.

GOING DOWN AMONG THE PEOPLE
Pearson—a Londoner—was born in about 1809.  Nothing is known of his family background, and a cloud of mystery hangs over his childhood and early adult years.  However, at the time of the 1841 census he was working as a fruiterer and greengrocer, with premises at 26 Brunswick Parade in Pentonville.  He was married to an Emma Vere, and they already had two children, both sons.  At the next census, in 1851, a third son and four daughters were registered.  A fifth daughter appeared in the 1861 census.

Pearson worked in Brunswick Parade throughout the 1840s.  But by the end of the decade he had handed over the premises to a John Jones, also a greengrocer, in order to answer a very different calling as a missionary.  He was attached to the London City Mission, and he would dedicate what was left of his life—and it was not a very long life—to this selfless work with some of the poorest members of nineteenth-century society. 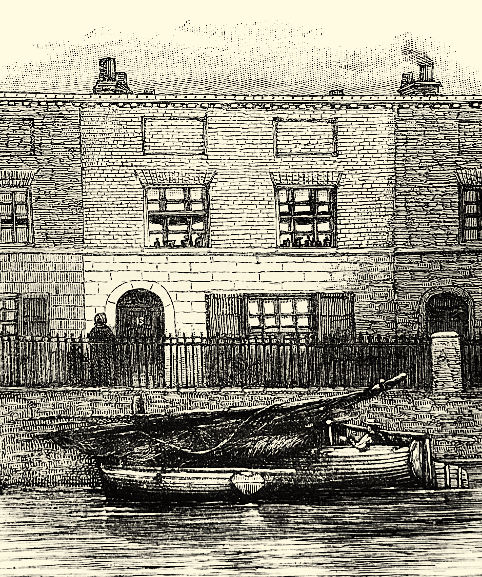 The London City Mission had been set up in 1835 by a Glasgow man, David Nasmith.  When he died in 1839 Nasmith was still only forty years old, but he had already brought into existence countless evangelistic and charitable organisations.  The purpose of the city missions—and they operated in Scotland and Ireland as well as in London—was to carry the gospel to areas of extreme deprivation.  He settled down with his family at no.13 Canning Terrace in Hoxton in a pokey little house on the Regent’s Canal, and within a matter of months ten city missionaries were at work.  By the end of the first year the number had risen to twenty, and by the end of the second to over sixty.  Although the Bishop of London disapproved of the mission, in that it accepted members from outside as well as within the Church of England, Nasmith had the support of the public, and by the spring of 1837 he had raised over four thousand pounds to finance the new organisation.

The London missionaries were each appointed to a district.  Strictly observing the boundaries of their districts, they would knock on doors, hoping to persuade the godless to become godly.  They encouraged parents to send their children to Sunday School.  They listened to the poor and the downtrodden as they described the wretchedness of their lives.  They kept journals, wrote reports, compiled statistics.  In some respects, and certainly in their secular activities, they were the nineteenth-century forerunners of the modern social worker.

And it was just such a mission that Henry Pearson, the fruiterer and greengrocer of Brunswick Terrace in Pentonville, embarked upon at the exact midpoint of the century.  As we know, he had been appointed to Paddington, where he went among the people, bible in hand.  And of the people Henry Pearson went among none were more forlorn—none more overlooked—than the people of the Paddington dust yards. 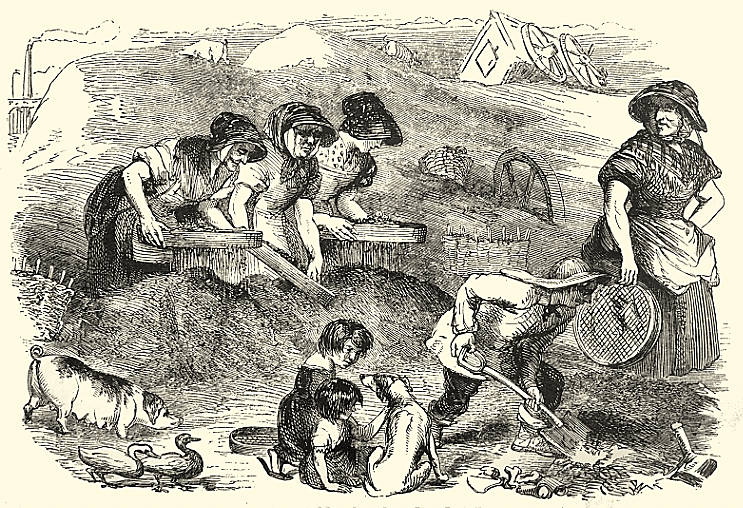 MUCK AND BRASS
There were many dust yards in nineteenth-century London.  Here the refuse of the city was brought on carts, and piled up into vast heaps.  From these heaps was extracted rotting vegetable and animal matter, which was sold as manure, and cinders, which were sold to the brickmakers of Kent.  The cinders were transported by barge, which is why the dust yards were found along the canals—the Paddington dust yard was on the Regent’s Canal—or along the river.  But as well as this “software” the heaps produced “hardware”, and “hardware”, as one writer put it, might be almost anything that could be sold:

rags, which go to the paper-makers; bones, to the bone-boilers; old iron, brass, and lead, to salesmen of those metals; broken glass, to old glass shops; old carpets, old mattresses, old boxes, old pails, old baskets, broken tea-boards, candlesticks, fenders, old silk handkerchiefs, knives, and salt-cellars, not forgetting the old shoes, which go away in bushels to the “translators,” or people who turn old into new ones.

The same writer—Ellen Henrietta Ranyard, the founder of the London Bible and Domestic Female Mission—pointed out that the fur of dead cats was particularly prized.  White fur, which was most in demand, sold for sixpence, all other colours for fourpence.

Whilst it was men who carted the refuse to the yards, it was women, young and old, who sifted the heaps, wielding outlandish sieves.  They worked from early morning until late at night, wearing navvies’ boots on their feet, and with pieces of old carpet tied round their waists.  They would pocket small finds—silver spoons, rings, the odd bank note or cheque—and take them home when their work was done.  They were a curious sight, standing in semicircles on the dust heaps, almost up to their middles in refuse.  All around them cocks and hens scratched and cackled and pigs rootled in the filth. 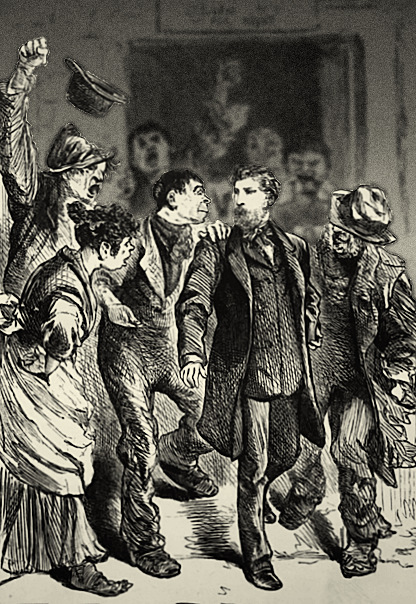 Missionary hounded out of a rookery.  Image in John Matthias Weylland These Fifty Years (1884) between pages 58 and 59.

Pearson’s mission, whether on the dust heaps or on the Paddington streets, cannot have been easy.  Missionaries venturing into rookeries and slums were not always made to feel welcome.  One recalled an intimidating encounter in a narrow street—men and women smoking and drinking, begrimed children dancing round a blind man playing a violin—another the flow of insults and ridicule.  They were threatened—“strangers down here isn’t wanted”—and doors were slammed in their faces.  Sometimes in the dark stairways of tenement dwellings they discovered—to their cost—that handrails had been removed and steps taken up to trap the unwary.

Even so Pearson persevered.  He was known for his pleasant manner, and the historian of the London City Mission, John Matthias Weylland, noted that the women on the dust heaps would put their sieves down at his approach, and stand with hands on hips to listen to his teaching:

There was no rival in this field of labour, so the good man was left to his own resources, and these were certainly adequate to the work.  He established a Bible meeting, a mothers’ meeting, a Sunday-school, and a provident club, exclusively for his dust people and their children, and the moral and religious results were indeed great.  From one hundred and fifty to two hundred persons assembled each Sabbath evening to hear the Gospel, and the moral character of their rookery became altered.

For an interesting example of the beneficent impact Pearson had on those around him, we may turn to an article in the magazine of the Ragged School Union.  In 1854, at a meeting in the school in Paddington, he was praised for his tireless efforts, in recognition of which he was presented with a copy of Dr Kitto’s Illustrated Bible, paid for by his grateful flock.  But he had been obliged to overcome “the hostility of the neighbourhood”, and we are reminded that the words of a city missionary, though well-intentioned, might often have fallen on deaf ears.  They did not always offer the succour that the poor of Paddington were most in need of. 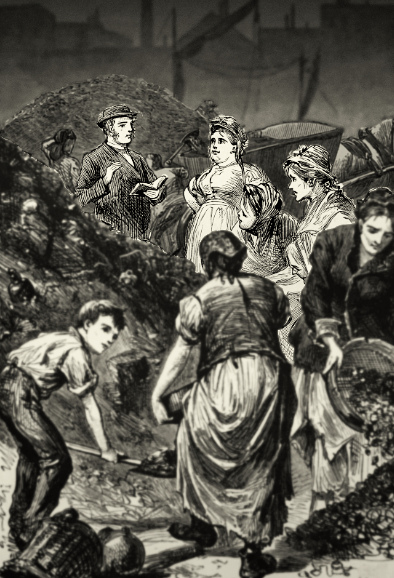 A visit on the dust heaps, showing Henry Pearson at work.  Image in John Matthias Weylland These Fifty Years (1884) between pages 140 and 141.

FAREWELL MR PEARSON
And it all ended sadly.  For in the winter of 1866 Pearson fell ill, and three days later, at the age of fifty-seven, he died.  The date was the 24th of December—a cold and cloudy Monday—and it is perhaps fitting that this most Christian of men should have shuffled off his mortal coil on the eve of a joyful Christian festival.  He had succumbed to typhoid fever, and it is hard to avoid the conclusion that the insanitary conditions to which his work exposed him ultimately caused his death.

He died at home, which in 1866 was at 35 Abbey Gardens in St John’s Wood.  One assumes that Emma was at his side, but we know that Henry, his oldest son, witnessed his death, for it was Henry who informed the registrar.  Weylland tells us that there was an outpouring of grief, for the “poor dust people” of Paddington felt themselves to be bereaved.  Pearson had been their benefactor for the past eighteen years, and when he was laid to rest they crowded round his grave, and wept.  “His name”—Weylland again—“is uttered with affection among them to this day.”  And in this way, though certainly overlooked by history, he has not been entirely forgotten.

Emma never remarried.  She lived until 1883, still in Abbey Gardens, and died in her seventies.  The children she and Henry had raised followed many paths, some as teachers, one as a clerk for the Gas Light and Coke Company, one as a dissenting minister.  The last of these—Samuel—was practising in the 1870s in Toxteth in Liverpool.  He was perhaps the child of Henry Pearson who most obviously took the same route through life as his father.  But the association with Paddington was lost forever, and in a final tribute to Pearson Weylland notes that his successor was kindly received by the people of the dust heaps but never truly loved.  Such is the fate of those who join the battle when the battle is already won.