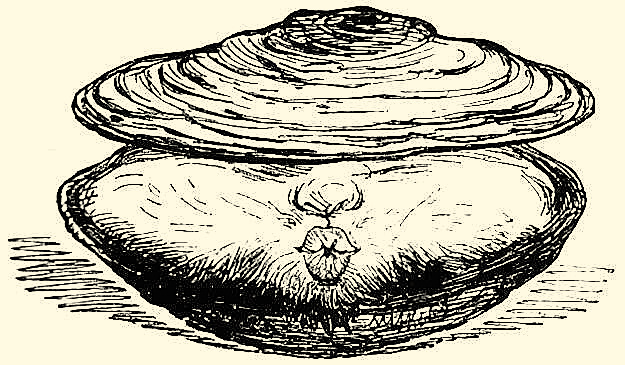 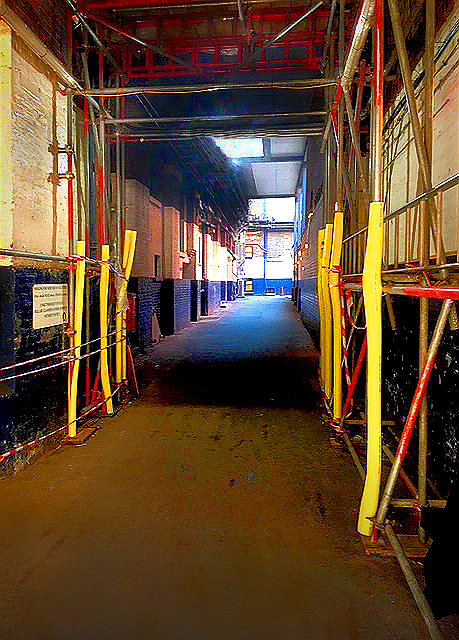 All that is left of the original Vinegar Yard, behind the Theatre Royal in Drury Lane.  © William Ellis-Rees 2018

Behind the Theatre Royal in the Covent Garden area of London there was once a narrow court called Vinegar Yard.  All that remains of it now is a passage entered through an arched gateway.  But there was a time when you could walk through Vinegar Yard from Drury Lane to what was then Bridges Street or Brydges Street.  And it was there in the 1840s that a story was born that briefly held all London in its thrall.

IN AND AROUND DRURY LANE
Vinegar Yard was built in the early seventeenth century, and had originally been Vine Garden Yard or the vineyard of Covent Garden.  Not surprisingly, given its proximity to the theatre, its population had colourful, not to say raffish, elements.  The lesser-known actors lodged there, and one of its taverns, the Crown, was a meeting place for The Eccentrics, a famous club with a reputation for drunken frivolity.  But Vinegar Yard had its share of squalor and poverty, and in nineteenth-century images of the theatre, in which  it is sometimes just visible, it certainly has a dark and dingy air.

The area was notorious for crime.  George Augustus Sala, who was a roving metropolitan journalist, thought that “some of the very worst streets, containing some of the very worst criminal rookeries in this wicked town” ran off Drury Lane.  The scamps and the cozeners, the flash houses, the endless varieties of sin and dissipation, the slatternly drabs of women—all these and more are described in his writings.  The ruffians loitering at street corners, in the doors of public houses, and in the alleys and passages were examples of “the vilest scum of London‘s dangerous classes”.  They leered and blasphemed, and they had punch-ups with policemen. 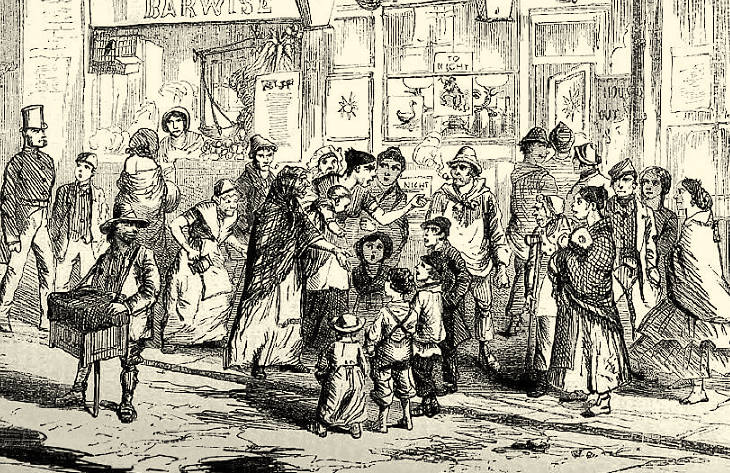 The policemen of “F” Division, who kept a watchful eye on Drury Lane and its environs, were certainly kept busy.  In October 1836 a shopkeeper’s errand-boy was arrested for stealing a sum of money from his master, whose name was George Pearkes.  The boy was later caught by Pearkes in Smithfield, and he was sentenced at the Old Bailey to three days imprisonment, and a whipping.  He was only fifteen.

The annals of crime in nineteenth-century Covent Garden contain many such examples.  But the errand-boy’s misdemeanour is particularly interesting, because the man from whom he stole the money is at the heart of the story that is now about to unfold.

THE SHELL-FISHMONGER OF VINEGAR YARD
Nothing much is known about George Pearkes until 1825, when he appears in the archives, in his early 30s, as an “oysterman” and “dealer in spruce ginger beer and British wines”.  His premises were then in Cross Court—described as “a miserable alley” by one observer—but by 1826 he had moved round the corner to no. 13 Vinegar Yard.  In the 1841 census he is a fishmonger, and married to a woman called Ann or Anne, who came from Bermondsey, and was nine years younger.  There is no mention of children in this or indeed in any of the later censuses.

An article published in 1848 in The Era has left us a vivid picture of this now forgotten corner of London life.  At the Brydges Street end stood a public house, the Black Lion, which had links with the celebrated pugilist, Young Dutch Sam, known to the boxing fraternity as “the man with the iron hand”.  Deeper inside the Yard was the Crown with its “gloomy corners”, followed by the Baked Irish Fruit Depot—a  baked potato shop with a gimmicky model steam-engine in the window—and then a Masquerade Warehouse selling fake jewellery and fancy dress, and a second-hand shoe shop.  Behind the houses was the horribly overcrowded burial-ground of St Mary-le-Strand, believed by some to be the “pestiferous and obscene” churchyard in Bleak House, where Jo swept the steps.  All things considered, this was not the most salubrious part of the capital, but George Pearkes lived there for over thirty years, and, as a character witness at a court case in 1858, he robustly upheld the good reputation of his home patch.  No, he told the court, there were not and never had been brothels in Vinegar Yard!

Supper-rooms in the Haymarket by William McConnell.  Illustration in George Augustus Sala Twice round the Clock (1862) page 325.

And who were Pearkes’s customers?  Anyone who loved fish in all its forms.  For his shop catered for the Victorian taste for lobster salad and dressed crab, for pickled and kippered salmon, for bloaters and dried sprats, for fish sandwiches, and, most importantly for our story, for oysters.  Our journalist, Sala, described the happy patrons of an oyster shop in Haymarket as a “peaceful concourse of customers taking perpendicular refreshment at the counter, plying the unpretending pepper-castor, and the vinegar-cruet with the perforated cork, calling cheerfully for crusty bread and pats of butter”.  They washed down the molluscs with brown stout, and wiped their hands on a towel hanging from a roller.

Anyway, at some point in 1843 a strange phenomenon occurred at no. 13.  Pearkes, who slept in an upstairs room, was kept awake for nights on end by a whistling from the shop below.  Thinking that it was a police constable on his beat, he threatened to lodge a complaint.  The constable protested that he only ever whistled, as Punch wryly reported, to a housemaid in Brydges Street.  As time went on the whistling became louder, until one night Pearkes finally convinced himself that he was being burgled.  At three in the morning he crept nervously downstairs, holding a rushlight, and armed with a pistol.

In the shop he met the maid, Jane, who had also heard the whistling.  (Mrs Pearkes was away at the time in Gravesend in Kent for the sake of her health.)  They were astonished to discover that the source of the sound was one of the oysters, which were stacked in a tub.  Once identified the whistler was separated from its fellow oysters, and given a rich diet of oatmeal and brine.

A MIRACULOUS BIVALVE
News of the miraculous bivalve and its whistling—what one commentator with a particularly advanced vocabulary called “sifflement”—spread like wildfire.  The Shellfish Warehouse was besieged by the curious, much to the delight of its owner.  One of the visitors was William Makepeace Thackeray, and the great writer always insisted that he had been there when an American gentleman declared that Pearkes’s oyster could not hold a candle to one he knew of in Massachusetts which could whistle “Yankee Doodle” from beginning to end.  Sadly, though, we have not discovered what the oyster had been whistling to fail so dismally to impress the American gentleman.

But just how did the oyster do it?  One collector of curious stories thought he had the answer:

Probably there existed somewhere in his shell a minute hole, such as those with which the stray oyster-shells upon the beach are usually riddled, and the creature, breathing in his own way by the due inspiration and expiration of water, forced a small jet through the tiny orifice each time that he drew his breath, and so made the strange noise. 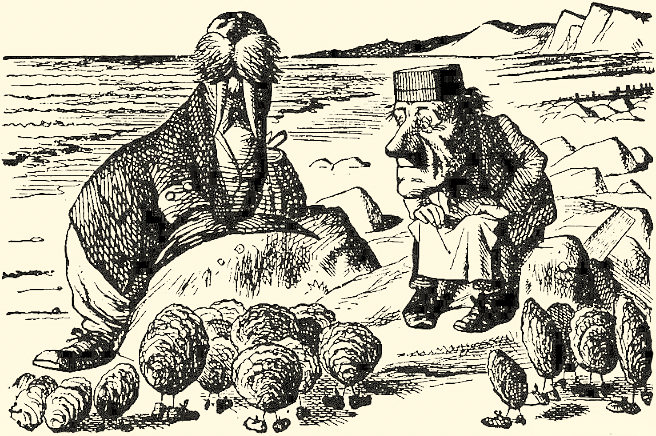 The Walrus and the Carpenter by John Tenniel.  Illustration in Lewis Carroll Through the Looking-Glass (1871).

However the sound was produced, it achieved for the oyster an instant celebrity.  As one might expect, a great deal of humour was also generated, and Punch in particular made hay, printing a portrait of the oyster its July-December 1843 edition that foreshadowed John Tenniel’s rather sinister vision of bivalves with legs in Through the Looking-Glass.  Another portrait was even painted on to the lamp above the door of Pearkes’s establishment, and the story behind this strange shop-sign was obviously well known, for when in 1847 the enterprising fishmonger put an advertisement in the Times for the hire of opera glasses—capitalising on his proximity to Drury Lane—he certainly knew what directions to give prospective customers.  “The Whistling Oyster,” the advertisement ran, “is on the lamp”.  What is more, someone must have written a popular song about the whole matter, for Gilbert of Gilbert & Sullivan fame wrote a humorous poem, “The Precocious Baby”, which was “to be sung to the Air of the ‘Whistling Oyster’”.

Perhaps the oddest survival was a cameo appearance in Peter Wilkins, a pantomime staged at Drury Lane in 1860.  The storyline revolved around the adventures of a Cornishman who was shipwrecked near the South Pole.  The whistling oyster, according to the notices in the press, was “engaged expressly for the opening” of the pantomime “by the kind permission of” Mr Pearkes.  No doubt the joke was appreciated by theatre-goers who visited Pearkes’s shop after the performance.  What form the oyster took on stage, though, we can only guess.

Other marine curiosities in the pantomime had punning names, ranging in quality from the rather predictable John Dory and Dog Fish to the inspired Jolly Old Sole and Ann Chovy.  But the critics were not sure what to make of it.  The Era described the staging of the shipwreck a “wonder of the scenic art”, but the humour was clearly rather feeble, and the Morning Post complained that the script was riddled with clichés of the shiver-my-timbers and avast-there variety. 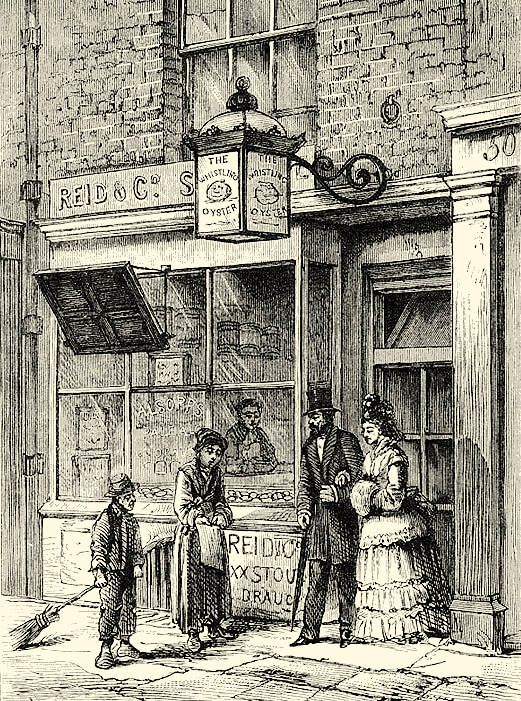 THE END OF THE OYSTER
Naturally it could not last.  And although we have seen that the memory of the whistling oyster stayed fresh for many years, the oyster itself did not.  There was some speculation about its fate, one writer wondering if it had been eaten alive, or scalloped, or turned into sauce and served with hot beefsteak in one of the neighbourhood’s eateries.

Fate was kinder to Mr Pearkes.  He lived on in Vinegar Yard for a time before moving down to Kent.  And there in 1878, in Gravesend, he died aged eighty-six.  No theatricals, no fall of the final curtain.  The registrar entered “old age” on the certificate as the cause of death, and left it at that.  There is a fine illustration of the shop, in which we glimpse Pearkes through the window, and it is amusing to imagine that we are making eye contact with him across the years.  But the illustration appeared in 1880, and we have no reason to suppose that the likeness was particularly exact.  Like so many Londoners of his time, George Pearkes must remain invisible, but we hope not entirely overlooked.